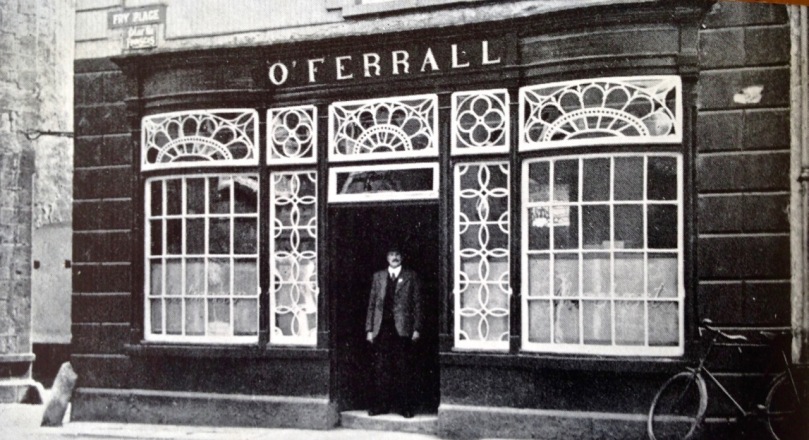 …One of the shops we visited was O’Ferrall’s, whose frontage dates from the days when shop-fitting was not merely a business but an art, as the picture we took of it, with ‘himself’ in the doorway, clearly reveals. Old Mr O’Ferrall was a tall gaunt figure. His hawk-like features had an aristocratic cast which was somehow enhanced by a long coat of archaic cut and a high stand-up collar. He had, we discovered, a great sense of the past, and as we sat together in the confined space of the small wooden cubicle to which, as in most Irish bars, women must retire in order to drink with propriety, he talked of the history of Athlone. Like that of most Irish towns, it has been stormy… (Green & Silver L T C Rolt 1946) 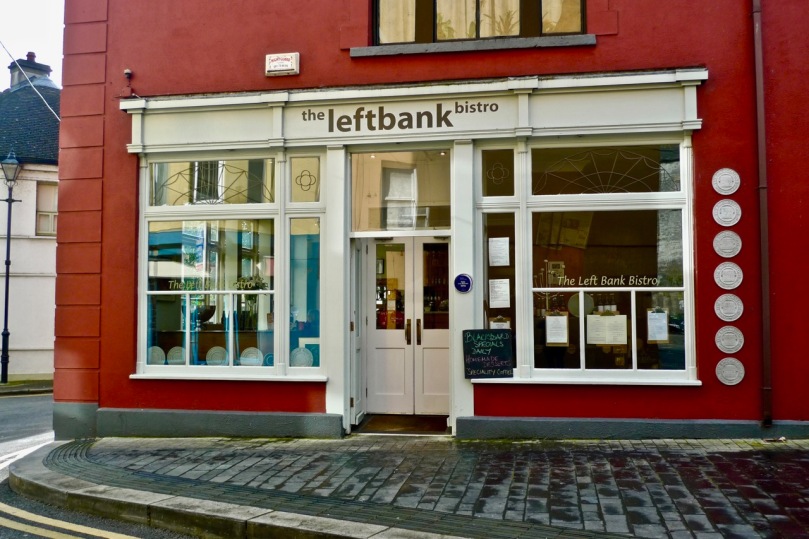 Top picture – Angela Rolts’ photograph of O’Ferrall’s shop and bar, Fry Place, Athlone – taken in June 1946 just before the Rolts embarked on their journey around the Irish waterways which they describe and illustrate in their book Green & Silver. Lower picture – the same view, Fry Place, Athlone – taken in 2016 – now a highly regarded bistro. The new shop frontage pays due respect to its predecessor in terms of overall proportion and despite the loss of the ornate bow windows. It’s interesting, too, that – seventy years on – the premises is still a local meeting place and purveyor of good food and drink

This is the fifth instalment of the Travel By Water series… When we retraced the steps of Tom and Angela Rolt – seventy years after they made their voyage of discovery around the Irish canals and waterways – we visited the town of Athlone for the first time. We were impressed enough to determine that we would return for a more detailed exploration of this midlands settlement, historically a strategically important crossing point of the Shannon – a formidable barrier intersected with her great lakes – the largest river in Britain and Ireland. 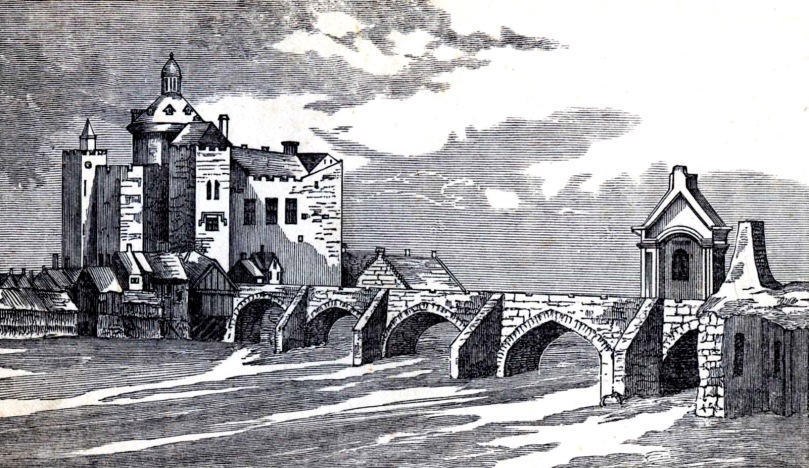 At one time (some histories say as early as the Bronze Age) this river crossing just below Lough Ree would have been a wide ford – Luan’s Ford. In the 11th century, Tairrdelbach Ua Conchobar, King of Connacht, had built a wooden bridge which survived, with various restorations, until 1566, when the first stone bridge was constructed (depicted above in a print now in the Aidan Heavey Public Library, Athlone). It could well be this medieval bridge that is commemorated in the ceilidh dance The Bridge of Athlone. The present bridge was opened in 1844. 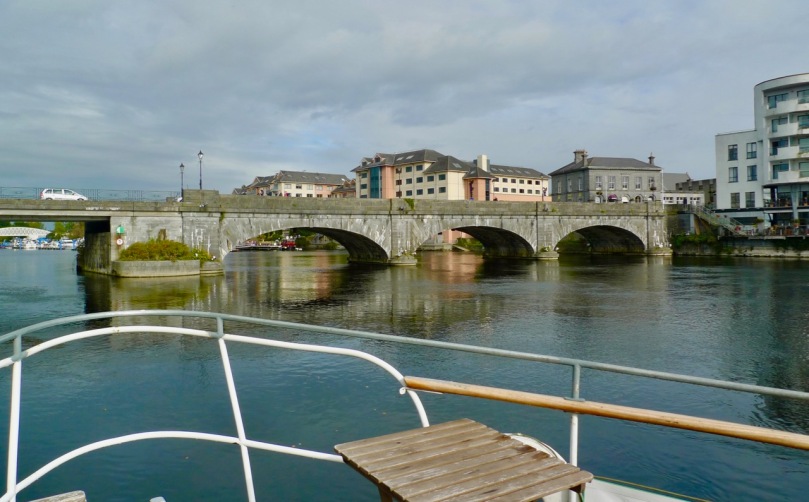 Athlone’s Victorian bridge today. Note the flat ‘navigation arch’ on the left (west side of the river): this replaces an earlier movable section of the bridge which allowed taller boats to pass through

The Shannon Navigation is now managed by the cross border authority Waterways Ireland. This body also manages the navigable canals, rivers and lakes throughout the island of Ireland, and does a very good job of it. Such an undertaking would probably have never been foreseen by the Rolts 70 years ago when some of the canals had been derelict for many years, and others were in poor condition. The Rolts’ borrowed boat Le Coq was based in Athlone and was probably the last craft to fully circumnavigate the circular route encompassing the Royal Canal, the Shannon and the Grand Canal in the 20th century: the Royal Canal fell into disuse shortly after the Rolts’ journey and was formally closed in 1961. Today the Royal Canal is completely restored to navigation (it was reopened in 2010). 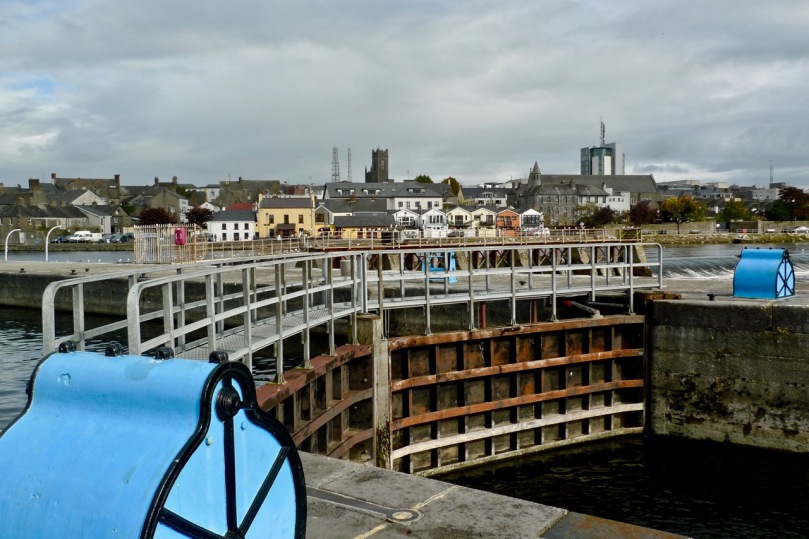 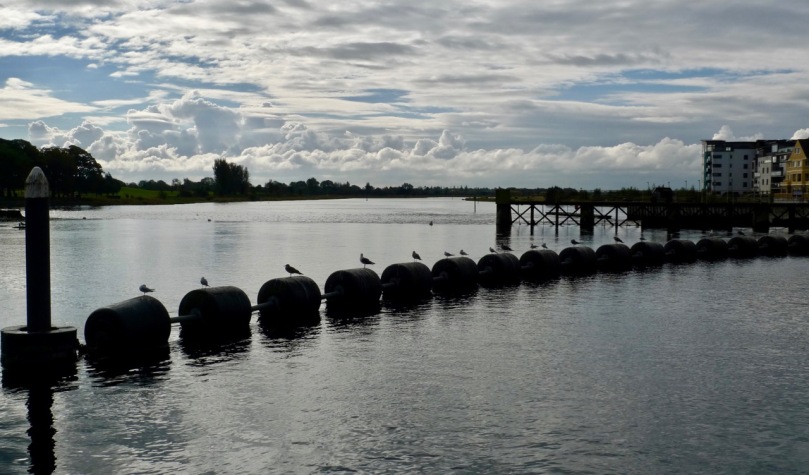 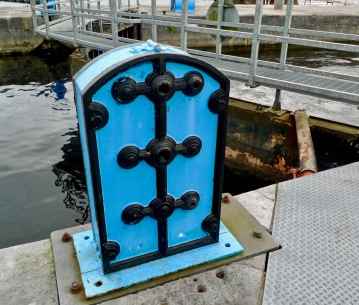 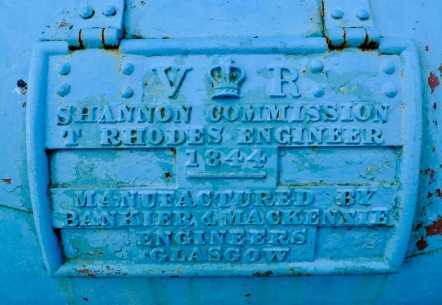 Upper picture – Athlone Lock today – some of the original Victorian lock machinery has been retained and is in working order although the main operations are electrically powered. Middle picture – upstream of Athlone the river widens dramatically as it approaches Lough Ree. Lower pictures – distinctive livery of the lock machinery in Athlone: note the commemoration of Thomas Rhodes, the engineer of the navigation improvements

We were fortunate to find some early photographs of Athlone and the river: these significantly predate the time of the Rolts’ journey but are worth showing for historical interest. 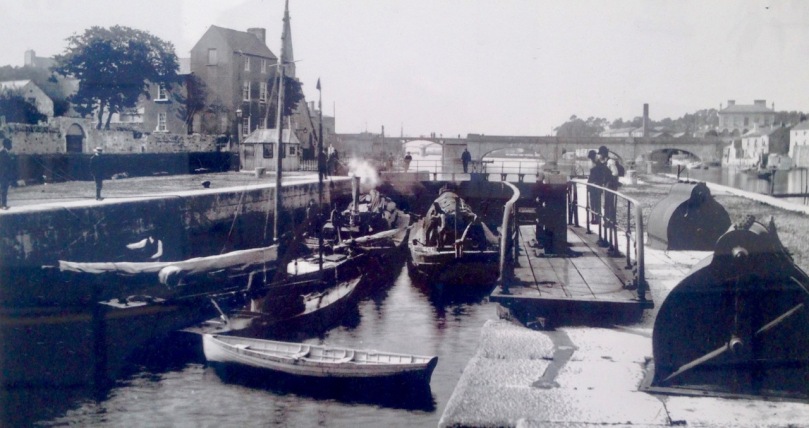 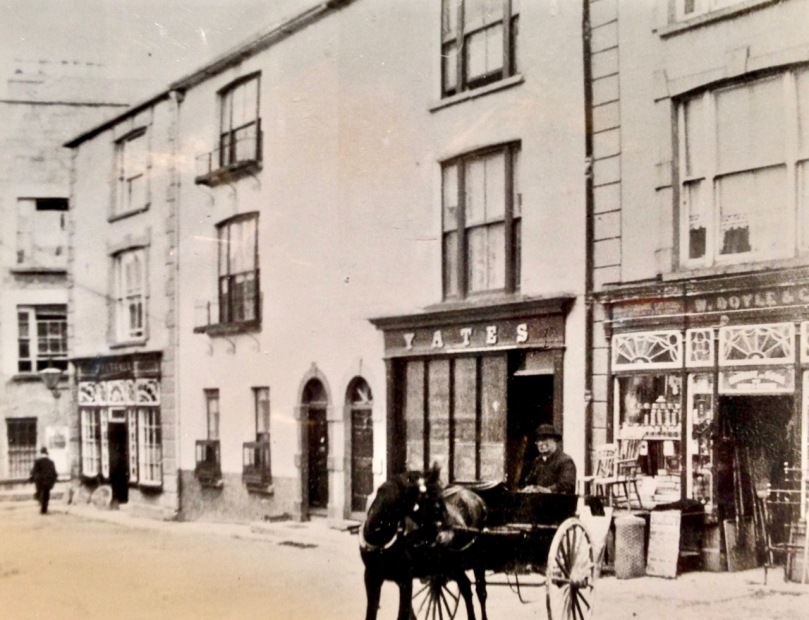 Upper picture – probably early 20th century – the lock at Athlone: note the commercial craft in the lock, one of them a steamer, and the lifting span on the bridge in the distance. Lower picture – Fry Place, Athlone, courtesy of The Leftbank Bistro: this probably dates from the late Victorian period and shows O’Ferrall’s on the left (see above) and a matching shopfront to the right

Compare Angela Rolt’s photograph of Athlone’s waterfront in 1946 (below) with my 2016 picture underneath it. Architecturally there is very little change to the buildings she recorded. Obviously, there has been considerable alteration to the town elsewhere in the last 70 years but the river itself has remained a constant. 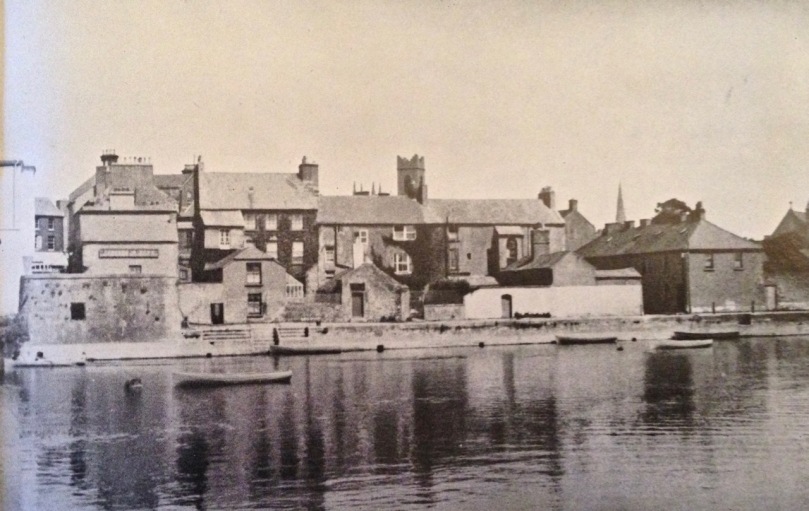 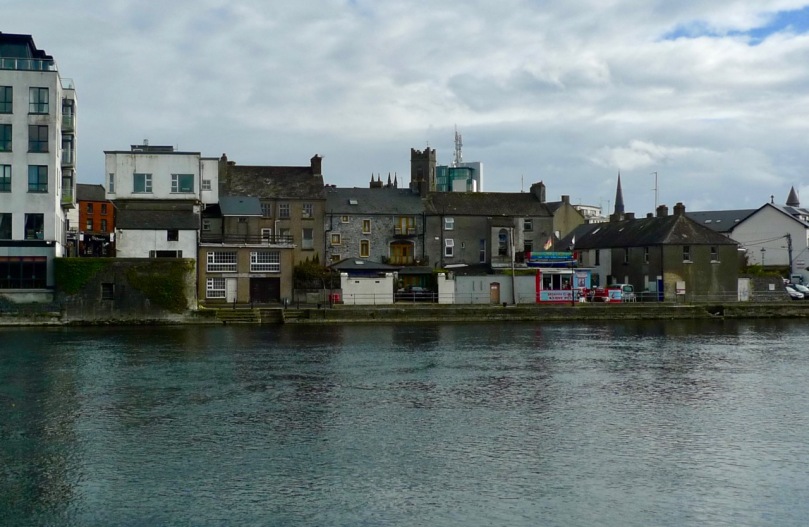 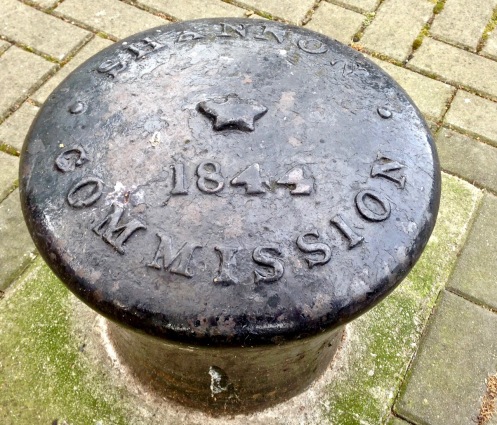