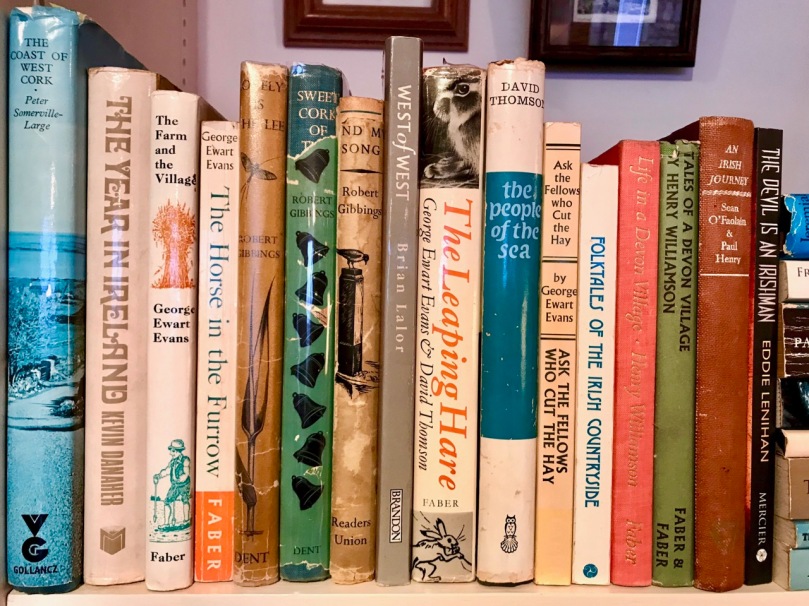 Our bookshelves in Nead an Iolair include some volumes which have travelled with me for the best part of fifty years. They include titles by George Ewart Evans, Henry Williamson, Brian Lalor, Peter Somerville-Large. Look carefully and you’ll also see some there by Robert Gibbings. Who is he?

A writer and illustrator, Gibbings was born in 1889 and died exactly sixty years ago, on 19 January 1958. He was a Cork man, raised in Kinsale, where his father became the Rector of St Multose Church. However, he was an inveterate traveller and lived most of his working life in England. Much of his work seems to exude ‘Englishness’ and – in an Irish Times article this week to mark the anniversary of his death, Alannah Hopkin writes:

People often forget that Gibbings was Irish. Brian Lalor, author of Ink-stained Hands, the definitive history of Irish print-making, was challenged by an English academic at a conference in Dublin in 2007, who refused to believe that Gibbings was Irish, as he had produced archetypal English landscapes. But his account of Gougane Barra, for example, confirms how deeply steeped in Irish myth and folklore Gibbings was. 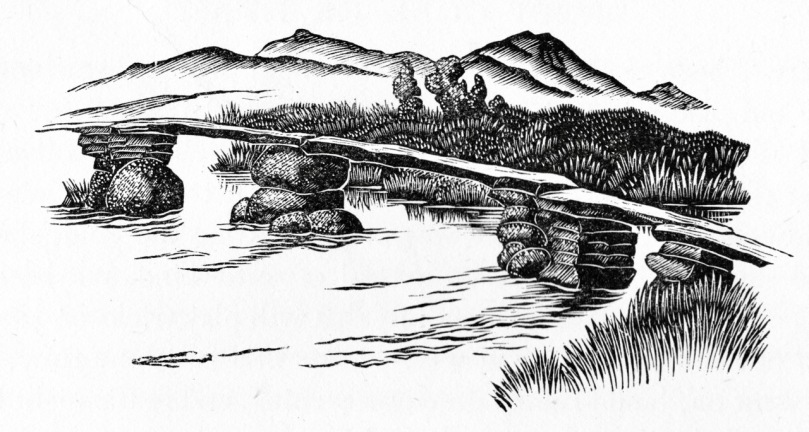 Gougane Barra in County Cork: upper image – the lake in the mountain. Centre – Robert Gibbings’ woodcut engraving of the lake which opens ‘Sweet Cork of Thee’ (1951). Lower image: a clapper bridge near Gougane – perhaps the same one which Finola illustrates in her post today

At the insistence of his parents, Gibbings studied medicine at UCC, although his ambition was to be an artist . . . writes Alannah Hopkin . . . While he enjoyed the scientific side of his studies, it soon became apparent that this big, soft-hearted man was unable to cope with the human suffering of his patients. His parents were apprehensive about his decision to be an artist, fearing, quite rightly, that it meant he would lead an unconventional life, looking at naked women, dressing untidily and consorting with social misfits . . . From 1911 he studied life drawing at the Slade in London. His contemporaries included Eric Gill, John Nash, David Jones and Mabel Annesley. He was advised to take wood-engraving classes; the technique perfectly suited his strong line and close observation of nature, which in this phase was lightly stylised.

The wood engravings of Robert Gibbings are exquisite: his eye is attuned to fine detail. His writing is also compelling: I suppose it reflects a nostalgia for past times and things gone, but it is also humorous and always tightly observant. He brings to life characters he has met in his travels. 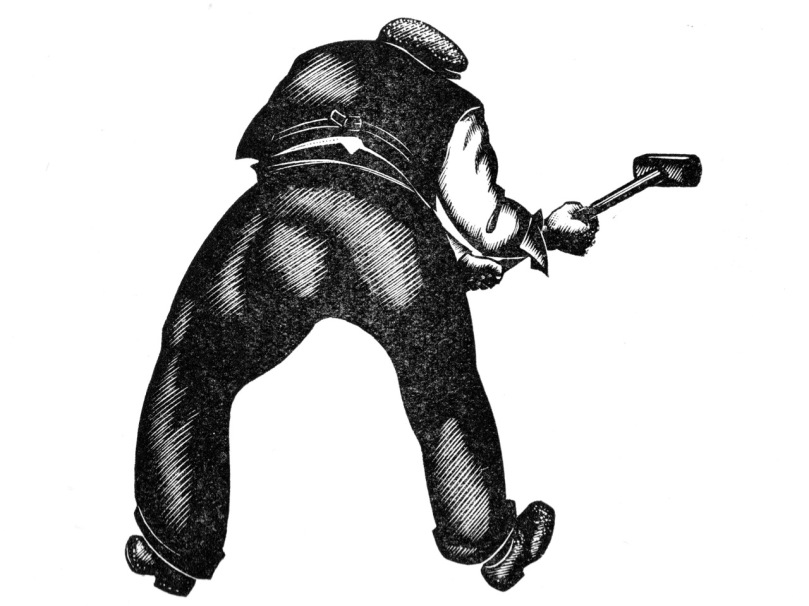 In the 1940s Gibbings attended the World Ploughing Contest, held for the first time in England, at Shillingford on Thames:

Bowler hats and highly polished riding boots had been the order of the day at the Arab Horse Show: here among the shires it was rubber-boots, corduroy caps, and hats of weathered tweed. ‘I think you’re Irish,’ said a man to me as I was admiring a pair of Pedigree Suffolks resplendent with brasses that told of former triumphs. ‘What gives me away?’ I asked. ‘The tilt of your hat,’ he said, ‘I can always tell an Irishman – he just sticks it on his head and forgets it. Look at some of these fellows – caps, hats, pulled up here, pushed down there – self-conscious all of them. Look at those two fellows in the pork-pie hats – I wouldn’t trust that one on the right, he wears his too straight, has to – it’s psychological.’ ‘Bishops wear their hats straight,’ I said. ‘Same idea,’ he answered. ‘Suggests the narrow path, only they keeps to it.’

For Robert Gibbings, text and illustration were always of equal importance. Each page of his books is set out as an art work, to be enjoyed by the two senses of sight and feeling – the feeling engendered by his descriptive writing. Here is the Foreword to his second ‘Irish’ book – Sweet Cork of Thee:

The illustrated Foreword to Sweet Cork of Thee, the second of Gibbings’ books which describe his travels in the land of his birth

Throughout his life, Gibbings immersed himself in travelling and in art. His best known books are his ‘river’ books, beginning with ‘Sweet Thames Flow Softly’, published in 1940 and, at the end of his life, the sequel: ‘Till I End My Song’ completed in 1957: he died at the age of 68. The rivers he explored included the Thames, the Wye, the Seine and Cork’s River Lee. Between 1924 and 1933 he owned and ran the art-based Golden Cockerel Press. Founded in 1920, its earliest prospectus proclaimed:

This press is a co-operative society for the printing and publishing of books. It is co-operative in the strictest sense. Its members are their own craftsmen, and will produce their books themselves in their own communal workshops without recourse to paid and irresponsible labour.

Work from the Golden Cockerel Press: typefaces by Eric Gill

It is the two ‘River Lee’ books that will concern those interested in all things Irish. My copies (both first editions) were given to me by Danny who I first met when I moved to Devon in the 1970s. Danny was determined that I was going to fall in love with Ireland – and it didn’t take me very long! Eventually Danny – who hailed from Limerick but, like Gibbings, led a restless life during which he travelled the world – settled in Devon and then moved on to West Cork.

Danny gave me these books to encourage my interest in Ireland. At the time he told me that ‘these were all I needed’ to get to know his country. I think he was right!

I encourage anyone who follows Ireland to read these books – and anyone who appreciates art to get to know the work of Robert Gibbings who died just fifty years ago. I will ‘play out’ the man by quoting these lines from his aptly titled ‘Till I End My Song’, and include an image of the last page of this, his final book.

Poets throughout the ages have sung of the peace of gently running streams. In the sacred writings a river is used constantly as a symbol of peace: ‘Then had thy peace been as a river’, ‘He leadeth me beside the still waters’. Throughout our own literature flows the timelesss tranquility of rivers. Spenser’s Prothalamion is borne on the waters of Sweete Themmes. The tortured mind of Swift longed for a river at his garden’s end. The gentler Stevenson wishes to all ‘a living river by the door’. I think it is the unbroken sequences of flowing water, the punching destiny of stream, that seem to knit a man’s soul with the eternities . . .