Fancy a walk? One with just enough elevation to get the heart going and with the reward of spectacular views at the top? It will take about an hour, maybe a bit longer if you stop to chat, or just gaze. 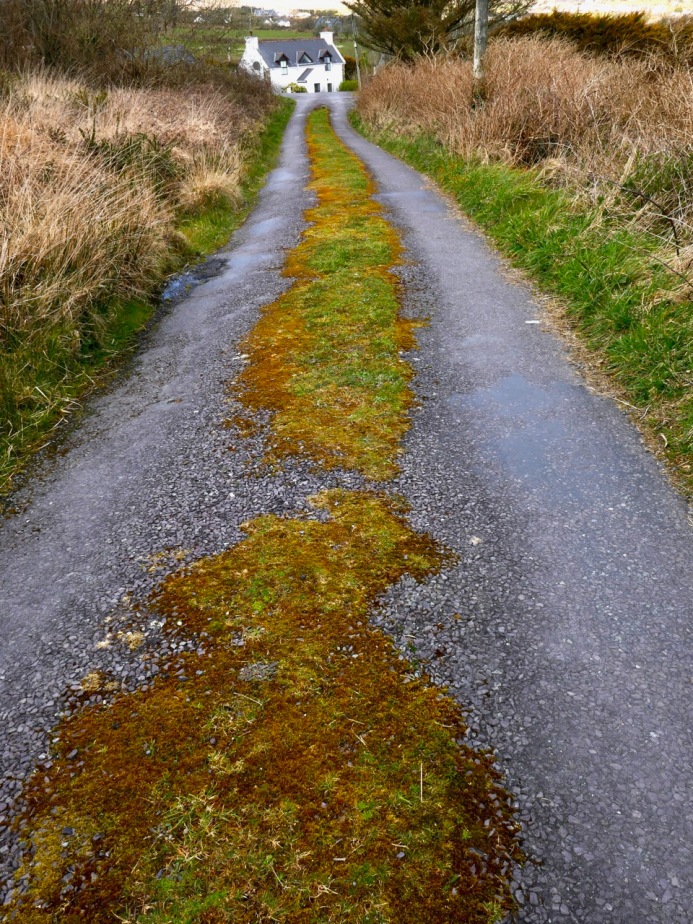 We’ve mentioned Sailor’s Hill before in the course of other posts – this one and this one. But it deserves a post of its own, because it’s a complete experience. Start from Schull and walk out along the Colla Road until you get to the old St Mary’s Church and graveyard. The National Monuments listing tell us that this was originally a medieval structure, although what we see in ruins now is mainly an eighteenth century church, situated in a picturesque burial ground. Turn right at that point.

You will notice the waymark signs. This is one of the newer extensions of the Fastnet Trails, and an initiative of a committed group in Schull. The walk up Sailor Hill is actually part of a larger walk, the Colla Loop – we are planning to do that one soon but only had time for this stretch of it today.

The road meanders gently upwards. Take the first left and then the next left. Views of Schull Harbour start to open out as the road rises. Looking back, you can see how Schull nestles at the foot of Mount Gabriel (see the photograph at the top of this post).

A tiny shrine in a gatepost

Later on, this boreen will be heady with Foxglove and Loosestrife and Oxeye Daisies, and later still the purple heather will dominate, but this is early spring and it’s been a long cold winter.

Everything is late this year, so I am happy to see the ever-reliable Celandine in profusion. 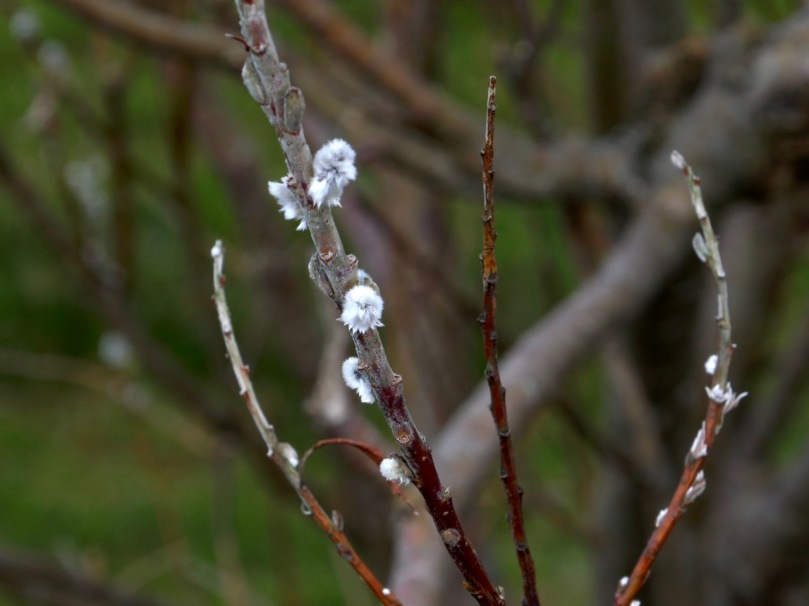 The willows are starting to bud out too, but apart from that, it seems that dandelions and lawn daisies are the only wildflowers brave enough to flourish along the way. Not that we disdain these humble flowers – they provide early and important nourishment for the insects and the bees. Must feed those pollinators!

Connie and Betty Griffin have built a house with magnificent vistas near the top of the hill. They never stop adding to it, Betty with flowers and Connie with quirky additions, sculptures and walls. This time, he showed us his Sailor Hill Newgrange, a nifty arrangement of standing stones that respond to the rising sun by capturing the morning light in a stone recess. 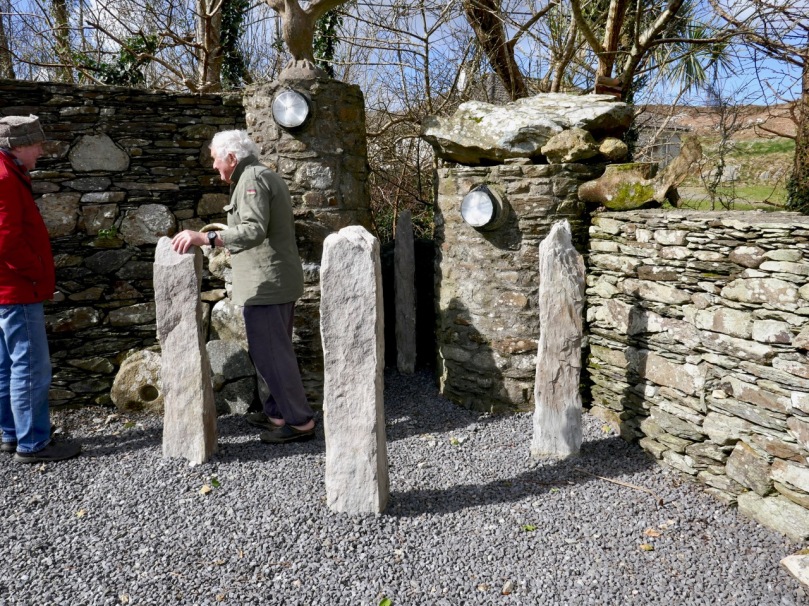 Up to the top then, and there it is – a breathtaking panorama that encompasses the whole of Roaringwater Bay and Long Island Sound to the south, and Mount Gabriel and its foothills to the north. Cape Clear, the Fastnet, Sherkin Island and all the smaller islands are laid out in front of you. 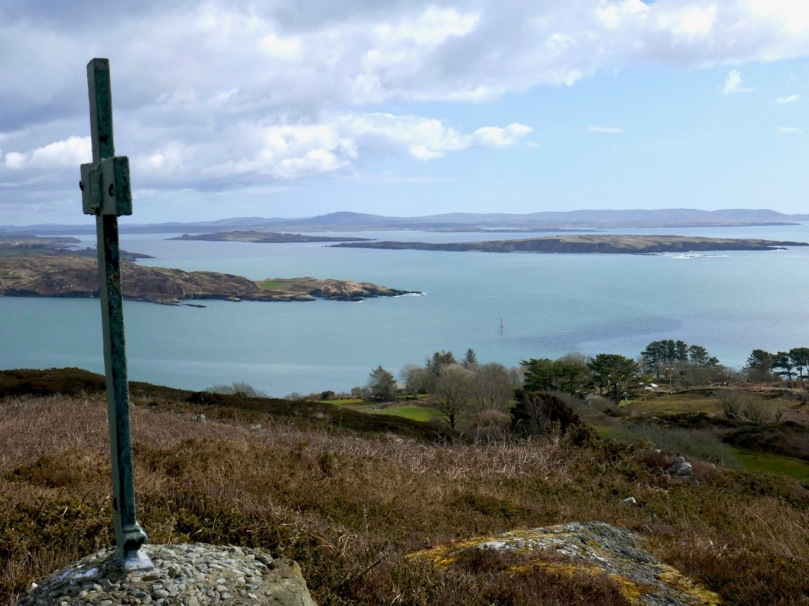 And there’s a cross and inscriptions, so you begin to realise that this site is about more than those views. Connie, who designed and built it, wants us to think about those who lost their lives at sea. It’s his own personal mark of respect and a reminder to us in the midst of all this grandeur to take a moment to contemplate on the power of the ocean and the fleeting nature of life. 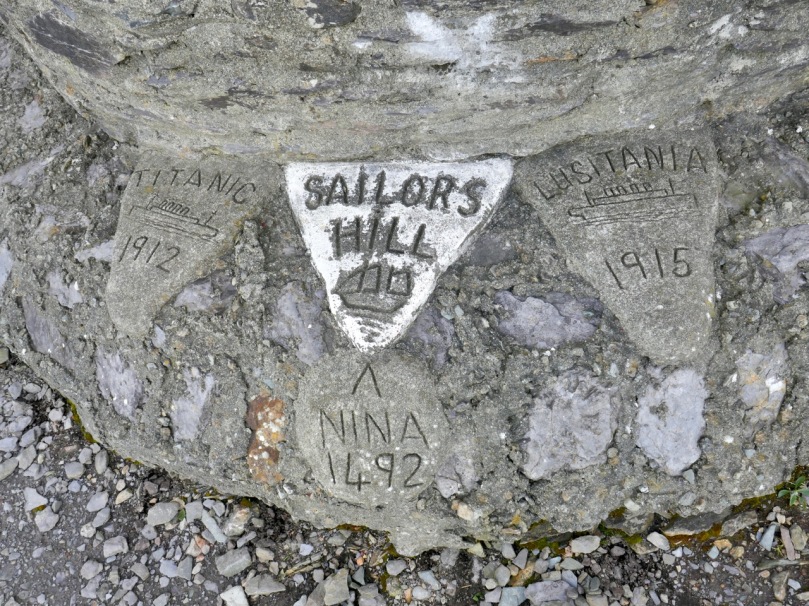 I had to look up The Niña, 1492, and of course it was one of Columbus’ ships. He took the Santa Maria, the Niña and the Pinta on his voyage to the New World, but the Niña was his favourite. To learn why, take a look at this. But why is it here? Well, I’m not sure, but there is a tradition around here that Columbus may have visited West Cork on his way. His last provisioning stop may have been with the hospitable, learned and Spanish-speaking Fineen O’Mahony, Scholar Prince of Rossbrin.

Connie has built his own tiny belvedere (he calls it his folly) perched to take maximum advantage of the view. It’s the perfect spot to sit, munch an apple, and enjoy a companionable chat before the walk down again. 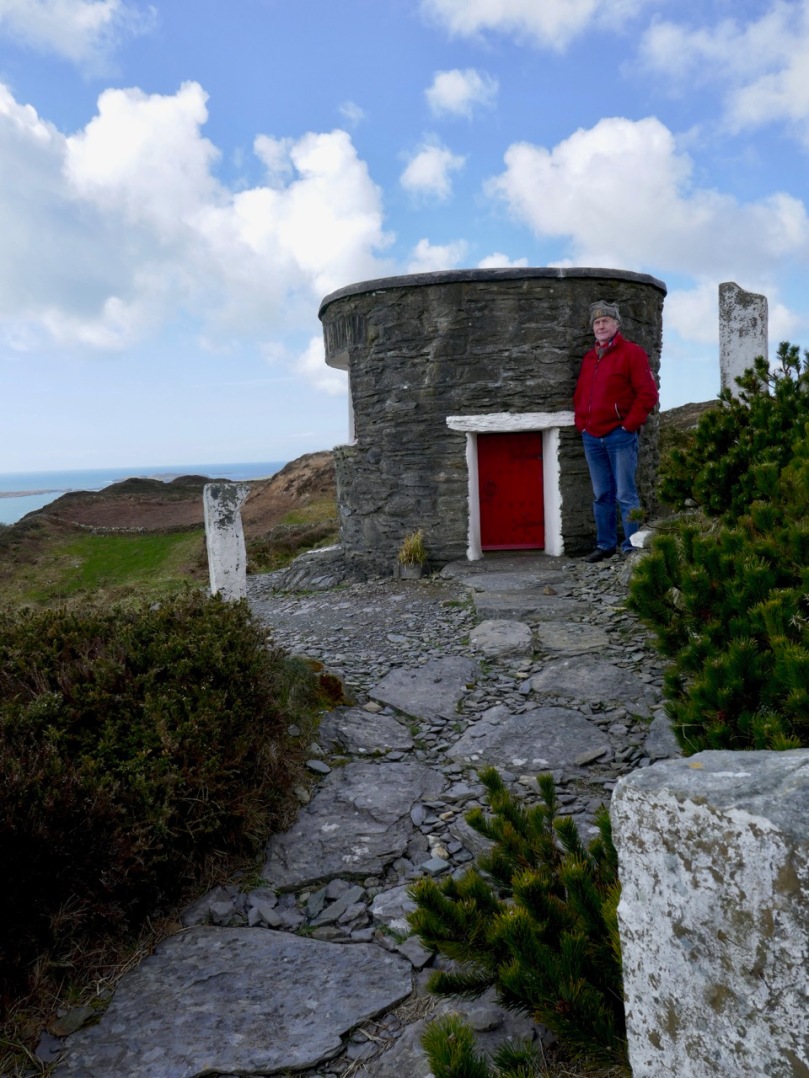 A final look out to sea. There’s Long Island and beyond it the Fastnet Rock with its iconic lighthouse. 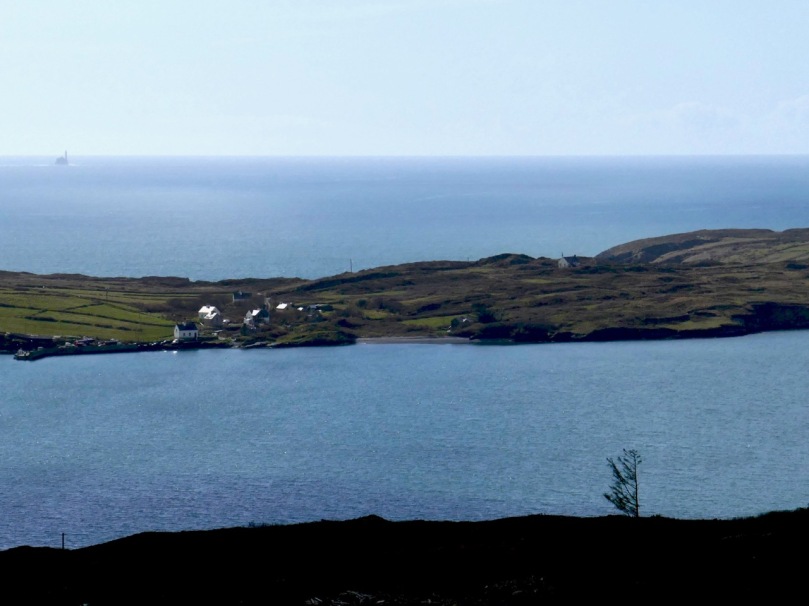 We paused to admire a Goldfinch in Connie’s garden, as well as his wonderful textural arrangement of sticks, stones and whalebones.

Thank you, Connie and Betty, from two happy walkers.