Researching a post on Romanesque architecture at Glendalough, I have come across so many depictions of Glendalough by tourists and antiquarians that I thought I would start by sharing some of these with you, by way of a general introduction to this outstanding heritage site. Situated in the heart of the Wicklow Mountains, the ecclesiastical settlement of Glendalough occupies one of the most beautiful valleys in Ireland and this combination of wild scenery and picturesque ruins made it a favourite of antiquarians, travellers and illustrators.

This illustration from Halls Tour of Ireland, Vol II, published in the early 1840s, concentrates less on architectural accuracy and more on an impression of romantic picturesqueness, although it does get the main features more or less right 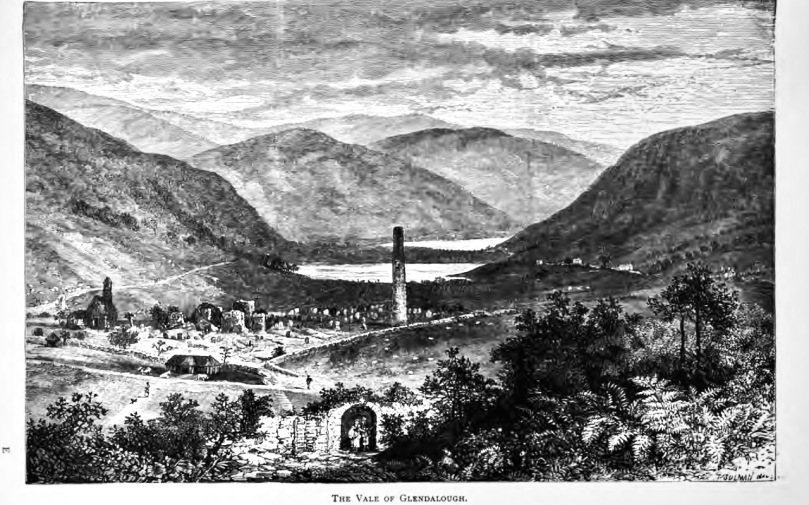 Another view, this time by Lovett from his Irish Pictures of 1888

This is also a highly significant archaeological and historical site. I’ve been reading a most lucid and illuminating guide to it and I highly recommend it – Glendalough by Christiaan Corlett. Chris is an archaeologist with the National Monument Service and nobody knows this place better than he. Of the valley he says, Is there anywhere else in the Christian world that can boast so many churches and related buildings dating from before the year 1200 that have remained so intact?

I’ve started this post with the most recent image, done in 2008 by our friend Brian Lalor, but in the style of an antiquarian drawing and showing the full scope of structures at Glendalough – eight churches and three towers – as the valley would have been seen in the thirteenth century. The round tower is the most prominent feature on the landscape – and the image that most visitors take away with them. It was, of course, originally a bell tower (although it may have served other functions) since the call to prayer was an important part of the monastic day. In the drawing directly above, done by W H Bartlett (see last week’s post about this wonderful illustrator) about the same time as the Hall’s Tour sketch, you can see that the round tower is roofless. Although once again Bartlett is careful to create a wildly romantic scene he also shows the principal structures, including the Gatehouse, which is pictured below as it is today. 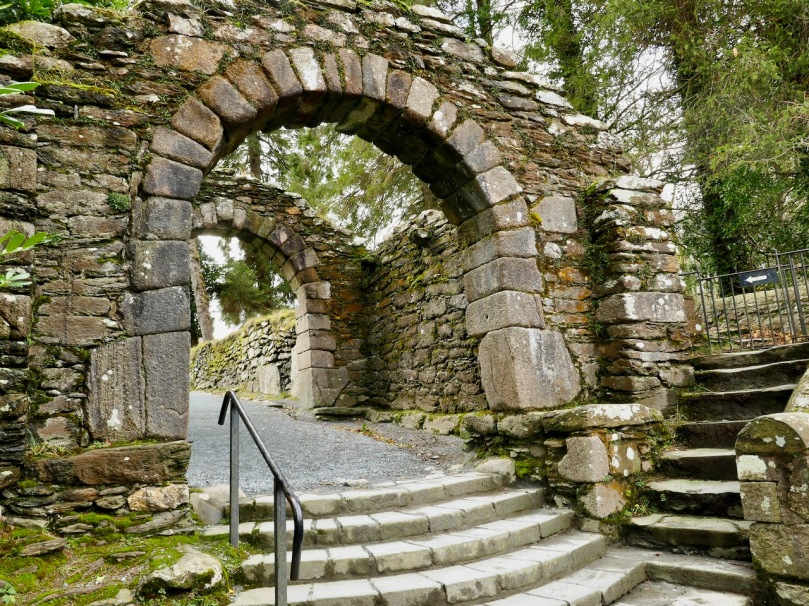 Note the projections of the wall on either side of the arch – these features are known as antae and were typical of early church construction in Ireland. See my post Irish Romanesque – an Introduction for more on this topic

Of the two other bell towers, only the one atop St Kevin’s Church still exists. The other was similarly situated on Trinity Church but has since collapsed. But we do have evidence of it – see the final illustration in this post! Here we see why antiquarian drawings are so important. The ravages of time have taken their toll on the buildings and carvings at Glendalough: some have simply disintegrated away while some carvings recorded by these early illustrators have disappeared, presumably stolen. 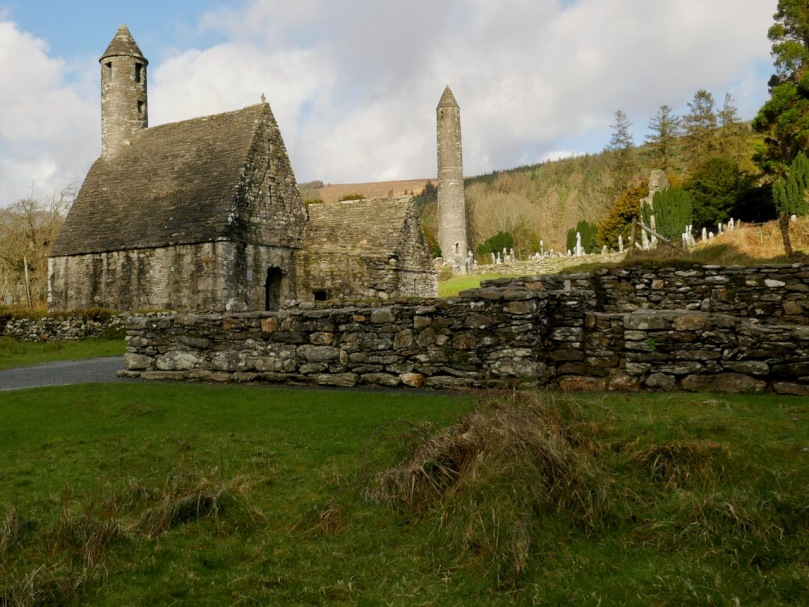 St Kevin’s Church, the vestiges of St Ciaran’s Church (foreground), the Round Tower, and the east wall of the Cathedral

There’s another consideration too – the well-meaning rebuilding efforts of the Victorian period. As a consequence of the Disestablishment of the Church of Ireland which came into effect 150 years ago on Jan 1, 1871, responsibility for all the ancient ecclesiastical sites transferred from the Church of Ireland to the state, and from there to the Office of Public Works. An urgent need to conserve ruinous buildings combined with an enthusiastic approach to ‘reconstruction’ and improvement led to many monuments all over Ireland getting a make-over. As one of Ireland’s premier tourist destinations, then and now, Glendalough became the focus of such activity. 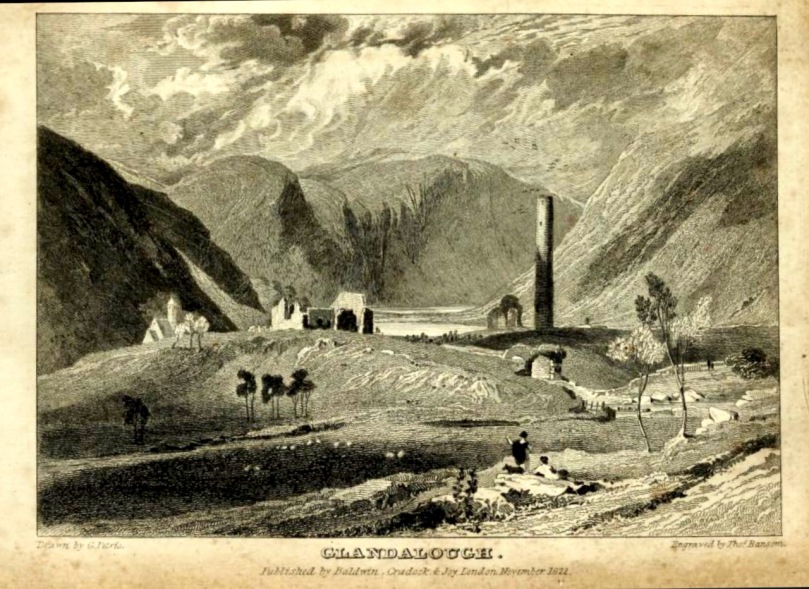 A Petrie engraving from 1827

Perhaps the most visible change was to the round tower, which was blessed with a brand new conical cap. The work was done carefully, using stones found at the site, and there is ample evidence that this was the original shape of the roof.

Some of the other reconstruction efforts may be less accurate, perhaps based more on conjecture than on evidence, but at least in the case of Glendalough the antiquarian drawings could provide some clues as to the condition of the monuments within the last 100 years, if not in their original state. 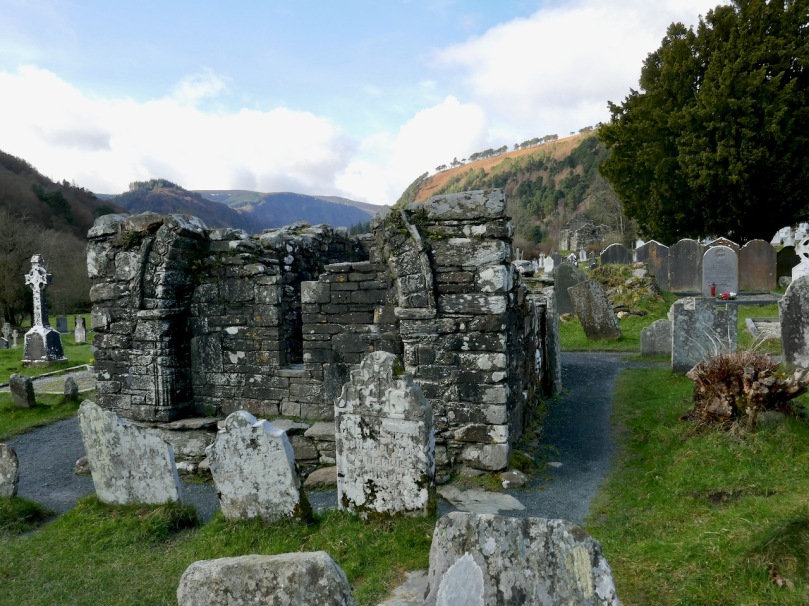 The Priests’ House (above) is a case in point. It had almost totally collapsed. As Corlett says, what can be seen today is a reconstruction carried out in the 1870s from the stones that survived among the rubble. This has presented a lot of problems for our attempts to understand the original nature of function of this building.

The Board of Works focused on the drawings of Gabriel Beranger from 1779 and rebuilt the elaborate romanesque arch as Beranger had depicted it. It remains somewhat controversial since it is highly unusual for such a feature to be on the outside of a building, although Corlett points out that its function may be related to the veneration of relics inside the chapel by pilgrims mounting the step to gaze through the small window.

Next time, I will concentrate on the architecture of Glendalough. It dates mostly from the 12th century and illustrates gloriously the persistence of traditional building designs from the early Irish church as well as the introduction of the Romanesque style with its arches and carvings. Some of the best examples are those that fewest people visit, so you may have a couple of surprises in store. 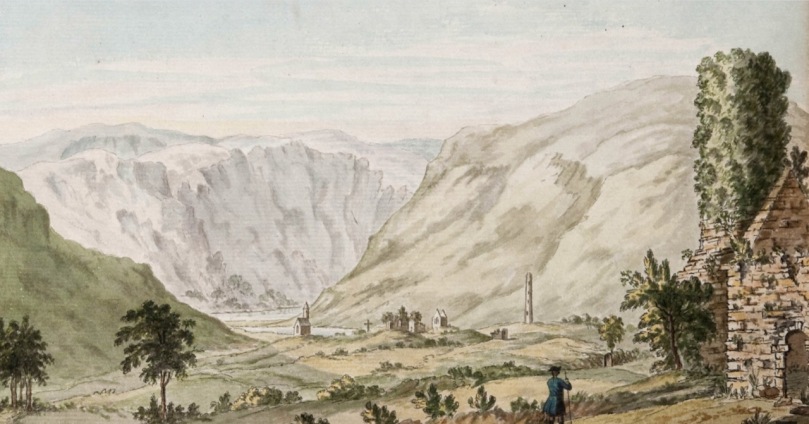 Beranger’s painting of Glendalough, done in the 1770s and showing the bell tower on Trinity Church, now gone