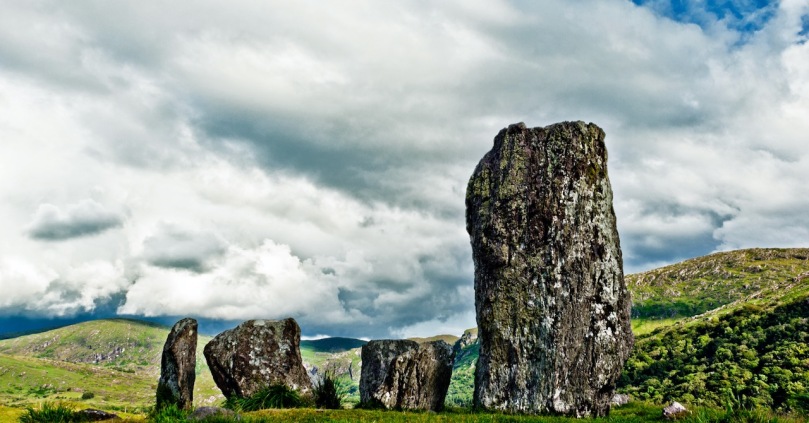 About half of the stone circles in the Cork-Kerry complex consist of only five stones, and constitute a sub-group know as Five-stone Circles. While they share many similarities with the Multiple-stone Circles, they are a unique class of monument. I’ve described the Multiples in detail here, so if you need to refresh your memory about that group, you can do it now and then come back and read on. While most of the photographs in this post are my own, I gratefully acknowledge the generosity of Ej Carr in allowing me to use two images (above and the last one in the post) of the Uragh Five-stone Circle and Standing Stone and of Peter Clarke for his drawing of the circle at Cashelkeelty (below). 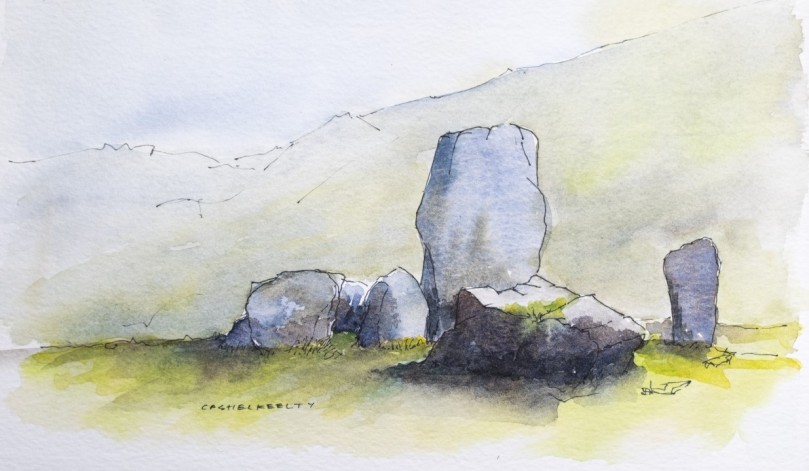 Most strikingly, the Five-stone Circles follow the pattern of the larger ones in having two portal stones, usually the tallest orthostat of the circle, across from a recumbent, or axial stone which is usually the shortest. In describing them here, I am following the work of Seán Ó Núalláin, who surveyed and described all the Cork-Kerry Stone Circles in 1975. While his comprehensive paper is  45 years old, it is still the most complete work on the Stone Circles of Cork and Kerry (The Journal of the Royal Society of Antiquaries of Ireland, Vol. 105 (1975), pp. 83-131). 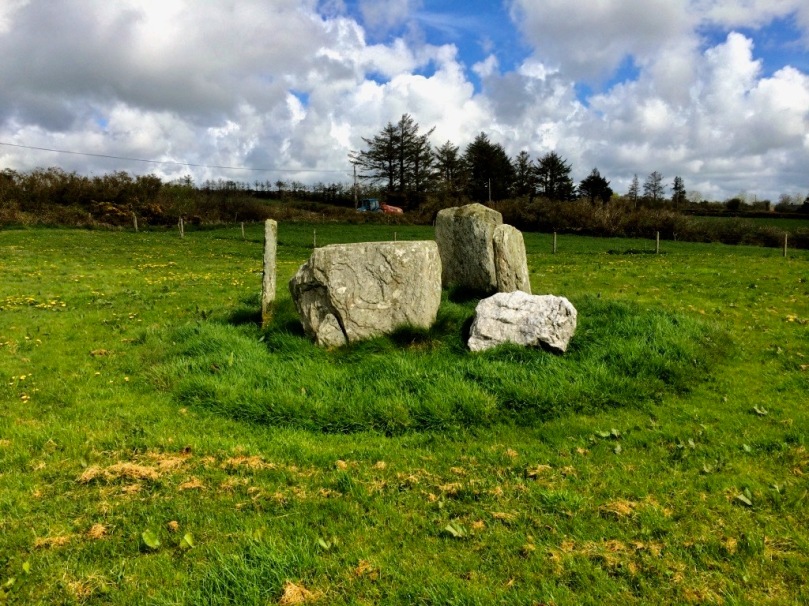 Lettergorman, with its large block of sparkling quartz

Most of the Five-stone Circles I have seen now are complete or almost complete, although some of the orthostats have fallen. They are actually in remarkably good condition – perhaps their small size has offered them some protection against the need to ‘improve’ farmland. some have been filled in with field stones but most are simply marooned in little islands of grass in the middle of a field, occasionally with a protective fence to keep cattle away. 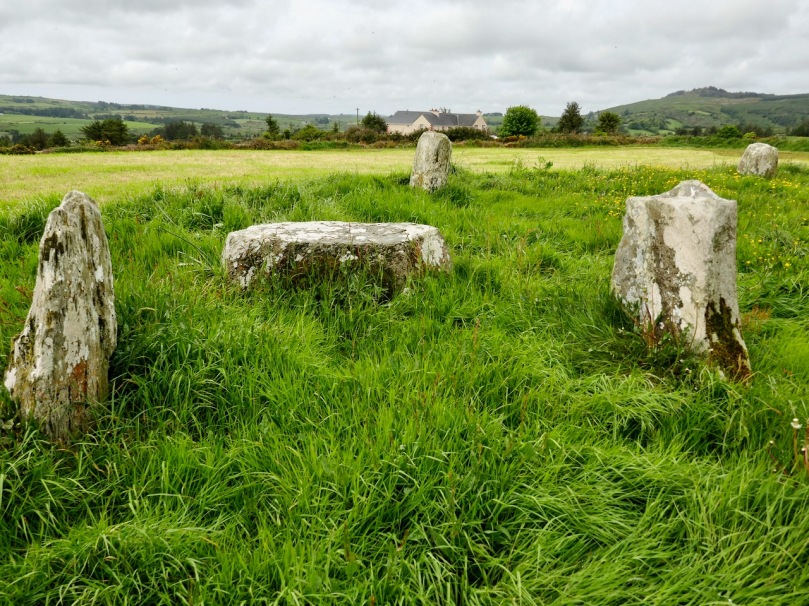 Glanbrack, at the top of a small hill with views to all sides. This is one of the ones that Ó Núalláin thinks may have only ever had three stones. Note the two outliers

Two of the Five-stone Circles may in fact, according to Ó Núalláin, be actually Three-stone – it is assumed that both Cashelkeelty and Glanbrack had two more stones originally, but he muses that a setting of three stones could be seen as representing the ultimate degeneration of the “circle” concept. 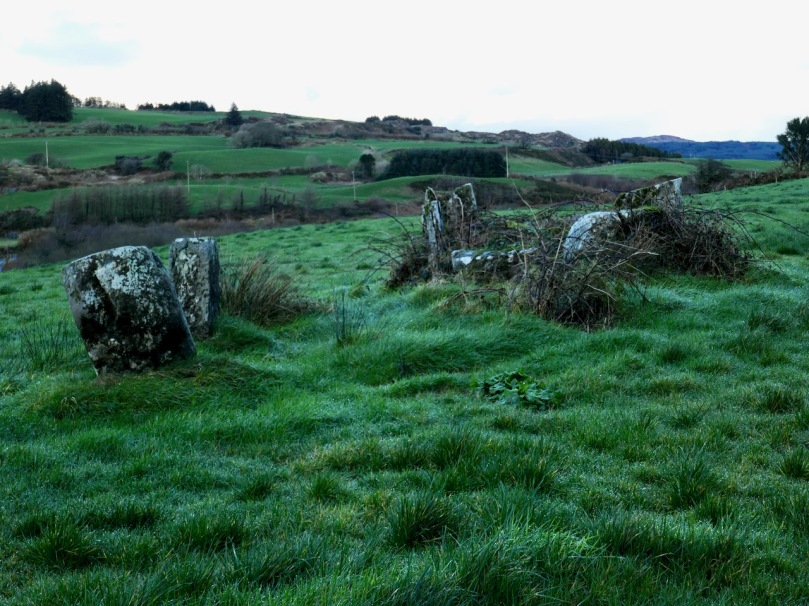 This is Clodagh Five-stone Circle, also with two outliers immediately outside the circle. There is another standing stone pair nearby

Neither are they truly circular – in fact they are mostly D-shaped, with the axial stone being the straight edge of the D. This is a function of their size – the axial stone, with its straight edge, represents a much bigger proportion of the circle that it would in a large Multiple-stone Circle, but it also brings up the issue of whether the circle shape is truly essential to the functions of this type of monument. 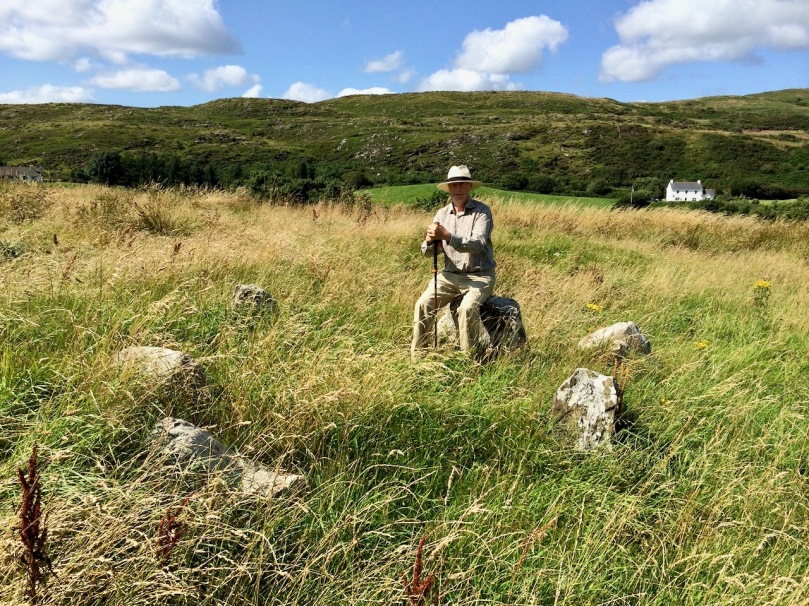 Hard to make out exactly what’s what at Inchybegga Five-stone Circle, since the stones are small and the circle is disturbed and filled with field stones

The axis of the Five-stone Circles, that is, the direction of a line drawn between the portal stones across the recumbent, is generally NE/SW. This orientation is not exact, but most fall within a few degrees of it. Ó Núalláin agrees with Aubrey Burl in his analysis of the Scottish circles (and our own observations at the circles confirm this) when he says 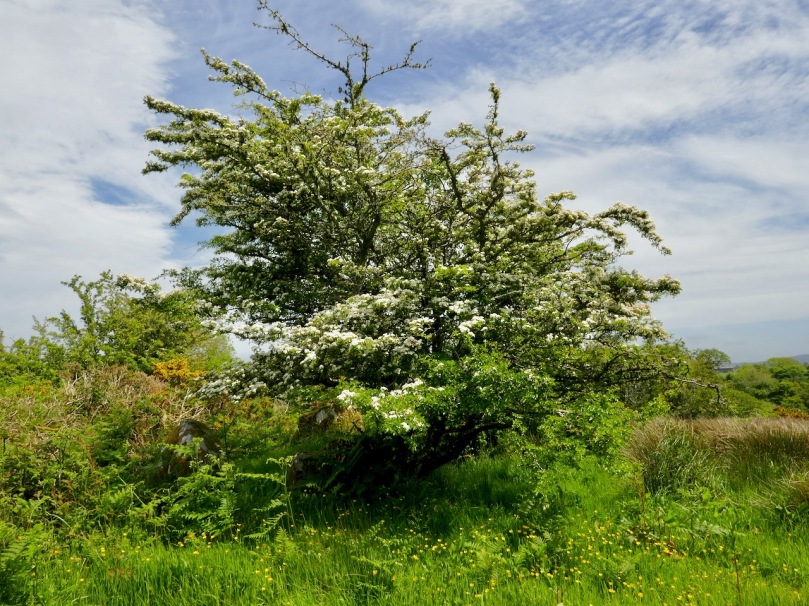 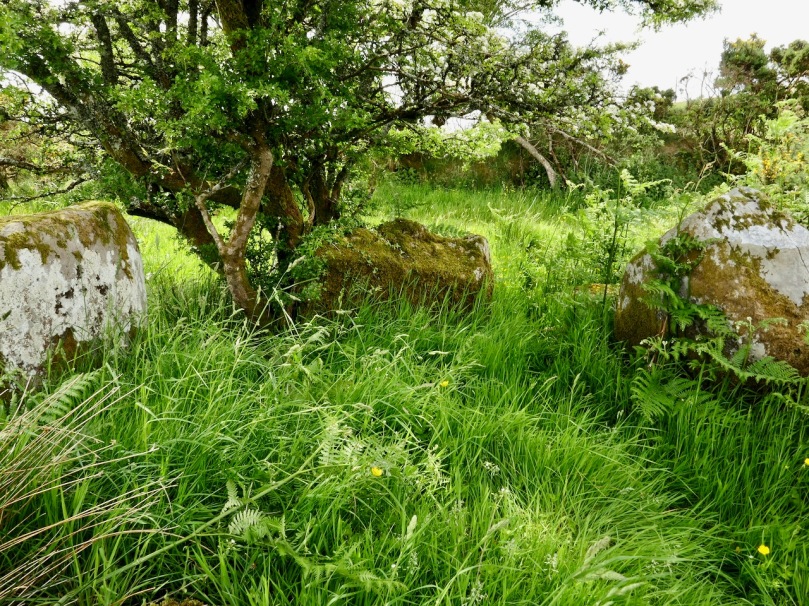 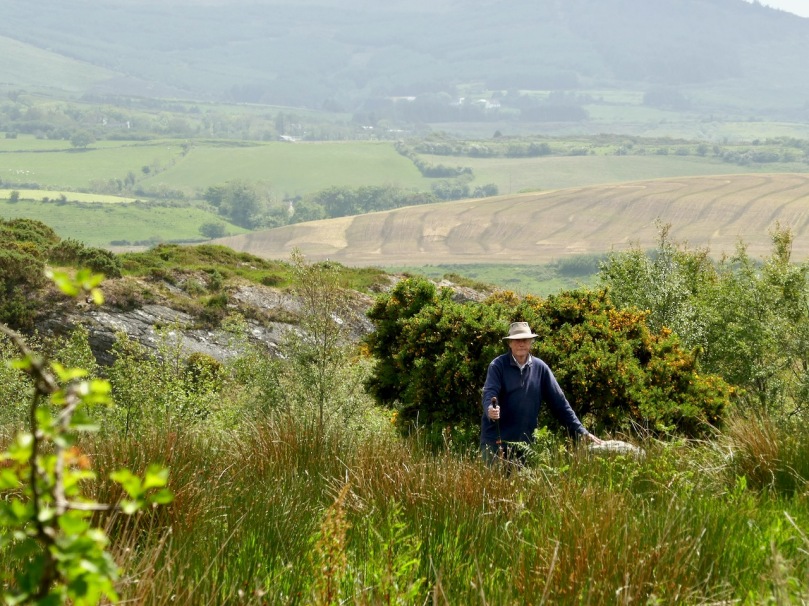 This intriguing site is Derryarkane Five-stone Circle. It is dominated by a Whitethorn Tree, traditionally never cut or interfered with. Under the tree the circle is complete although one of the portals has fallen. Robert is standing at an outlier about 35 metres away

As with the Multiple-stone Circles, there are peripheral monuments associated with Five-stone Circles – standing stones, stone pairs, stone alignments, quartz blocks, radial cairns, and in once case (Mill Little) boulder burials. None of these are inside the circle so are referred to as outliers. 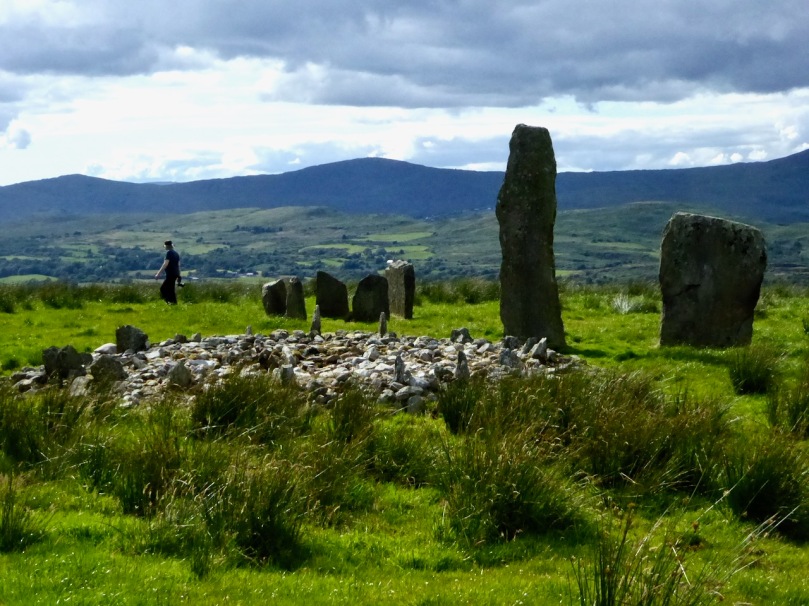 One of the most complex of the Five-stone Circle sites is Kealkill (above), which includes two large standing stones (one of them is truly enormous) and a radial stone cairn. 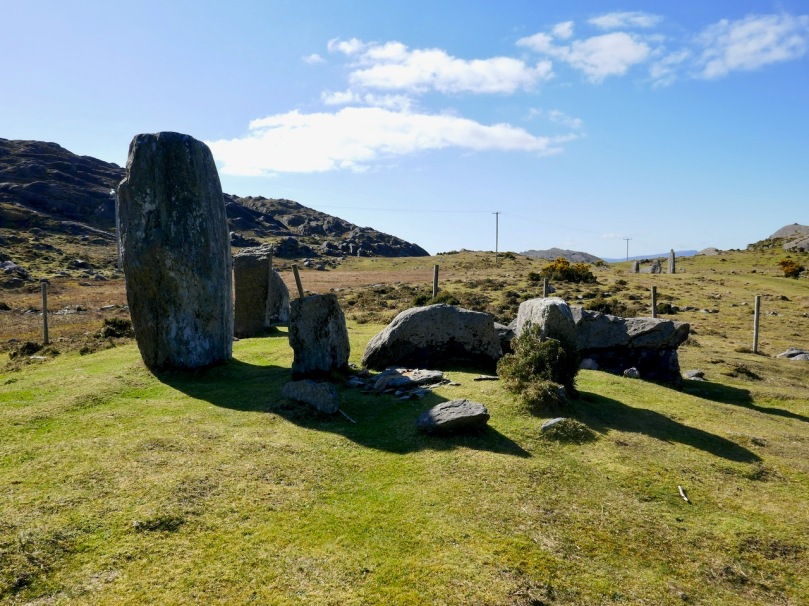 Another complicated site is Cashelkeelty. Here (above) we see the Five-Stone Circle (although it may be the second of Ó Núalláin’s Three-stone Circles), a row of three stones to the left, and in the distance orthostats of what may have been a Multiple-stone Circle 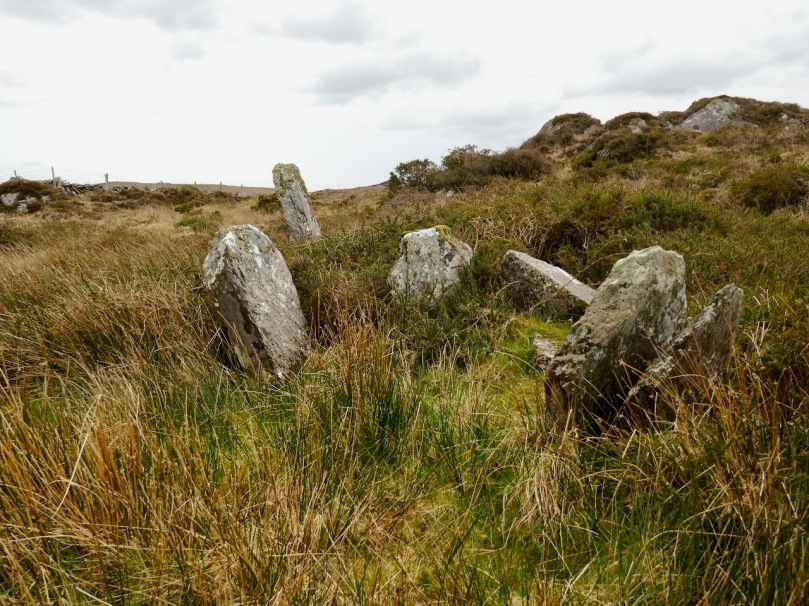 There are two Five-stone Circles in the townland of Baurgorm. This one (above), the more northerly of the the two, has two outliers but only one is visible in this photo as the other has fallen. There are two other standing stone recorded nearby but we could not find them. The portal stones are unusually far apart in this circle. 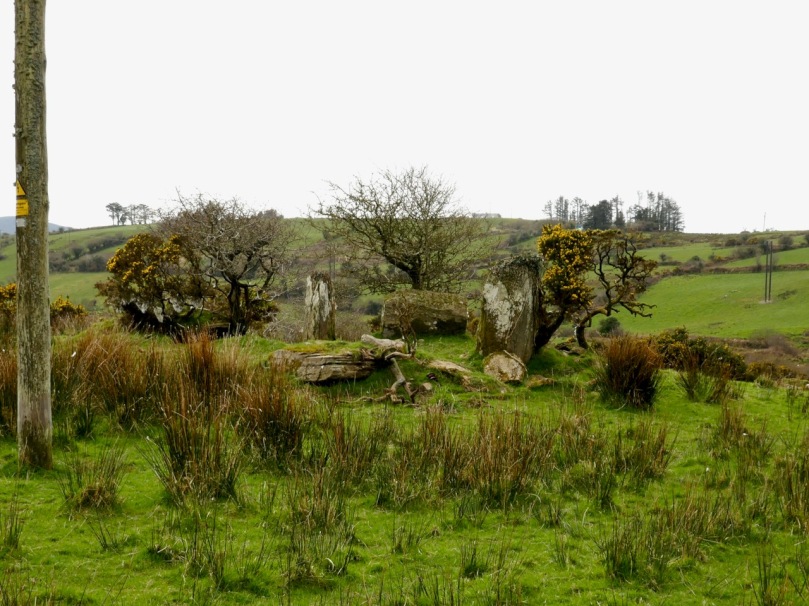 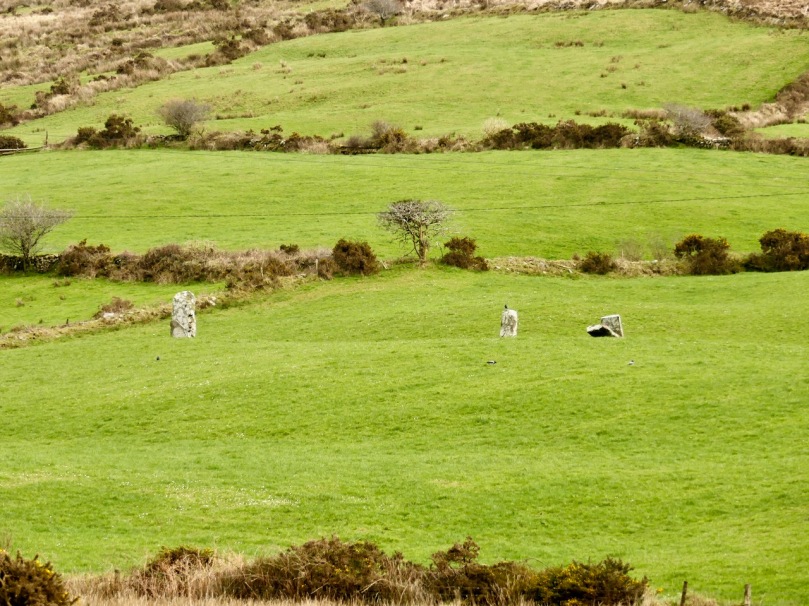 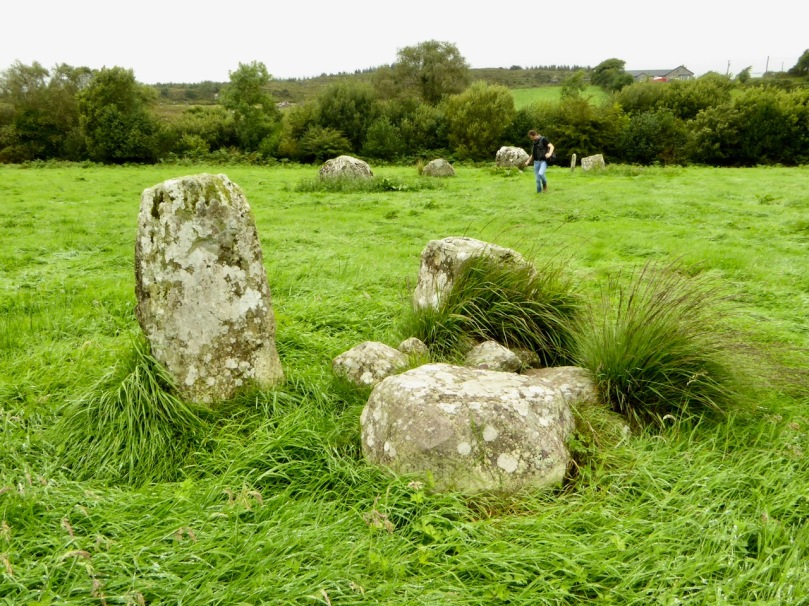 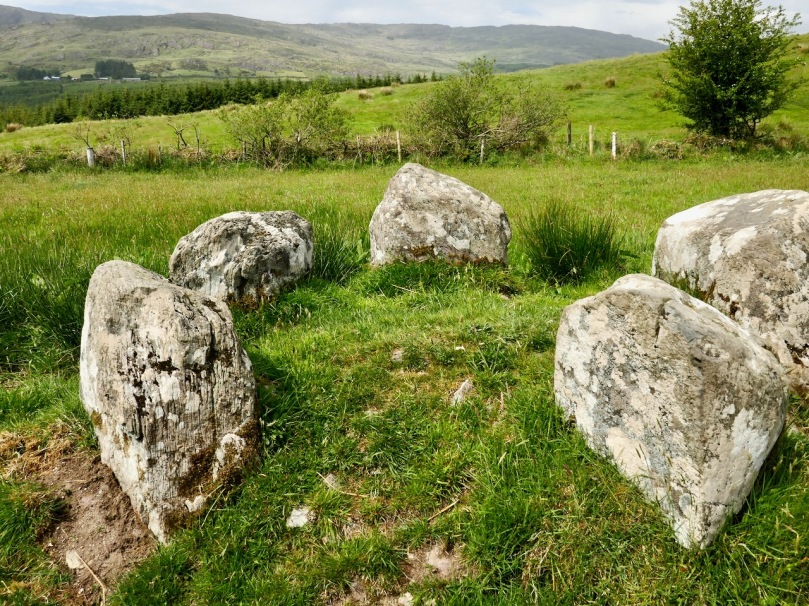 Ó Núalláin finds the morphology (size and shape) of the stones unremarkable, apart from noting that the stones in individual monuments are roughly similar in size and shape. However, there is a little more to say about it than that. While the recumbent is invariably flat-topped, the flanking stones can vary from a gently rounded curve, to a slant, to what looks like a deliberately shaped angular peak. Have they been chosen, or shaped, with some purpose in mind? Two examples (above and below) are shown here where the right flanking stone (to the right of the recumbent) appears to have been chosen for its pointed shape. The first is Cappaboy Beg, the smallest of the Five-stone Circles and the second is Inchireagh. 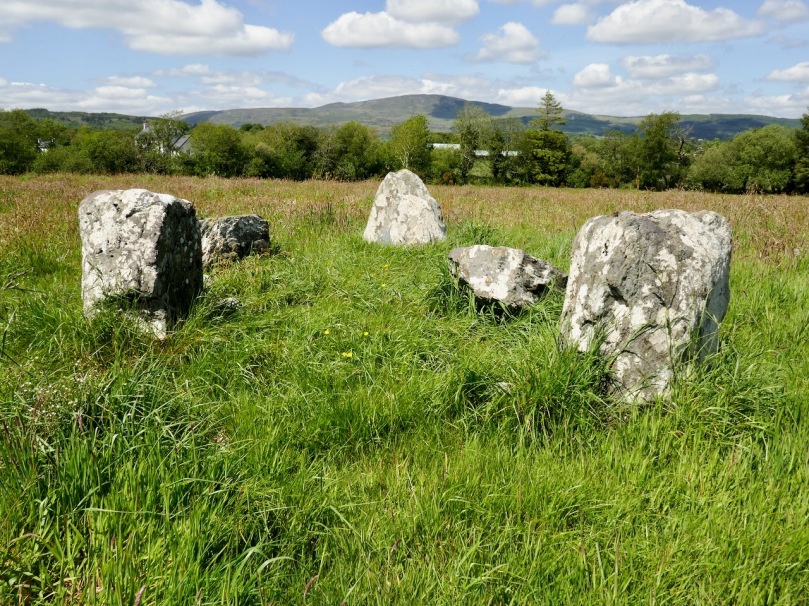 Even though the recumbent is usually the lowest stone in the circle, it’s not always the case. At Kealkill (below), for example, the recumbent is easily the largest and most dominant of the five stones. 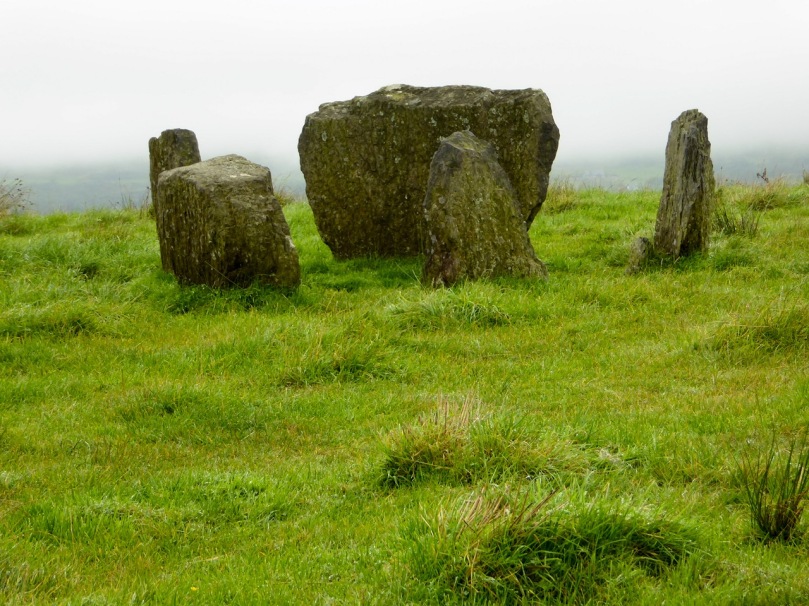 We cannot rely on archaeological evidence to reveal more about the nature and purpose of the Five-stone Circles. Only one has been scientifically excavated – the one that is part of the Kealkill complex. No burials or deposits were found. A one-day dig in the 1930’s at another site, Knocknakilla, revealed a sort of flat-stoned pavement in the interior, with lots of quartz fragments. Obviously this will be a fertile field for some future researcher. 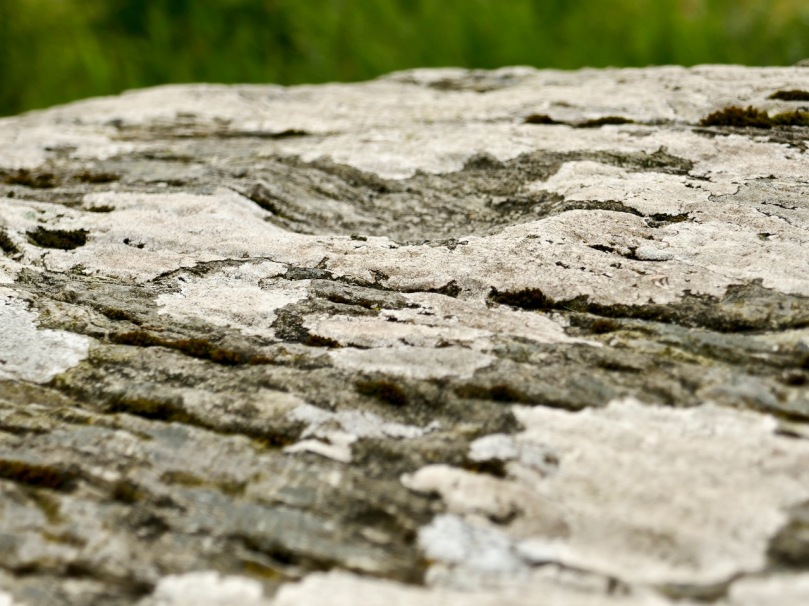 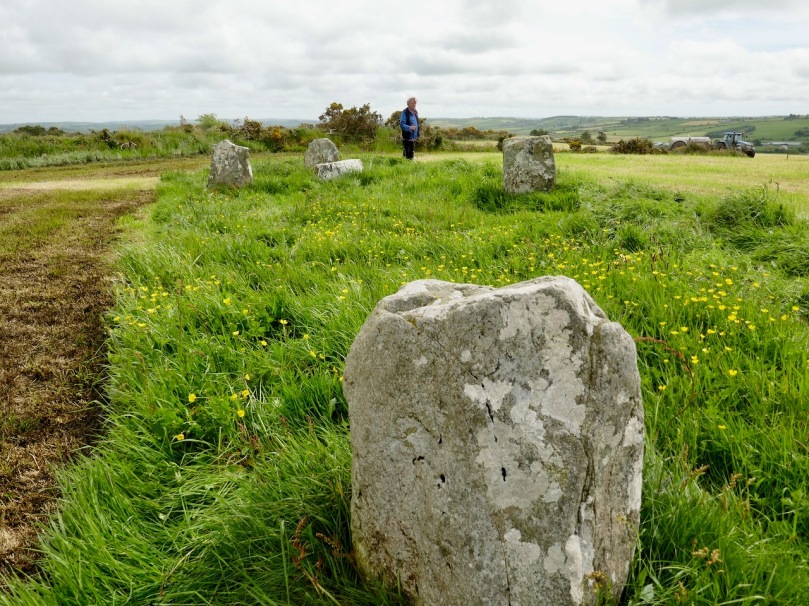 Glanbrack (above) has cupmarks on the top surface of the recumbent. Our second photograph, taken from the further of the two outliers, reminded us that on the day we visited the field had been half-spread with slurry (we held our noses). While we were engrossed in our photographing and observing, we suddenly became aware that the tractor had arrived at the gate (can you see it?) to do the second half. We hot-footed it out of there! 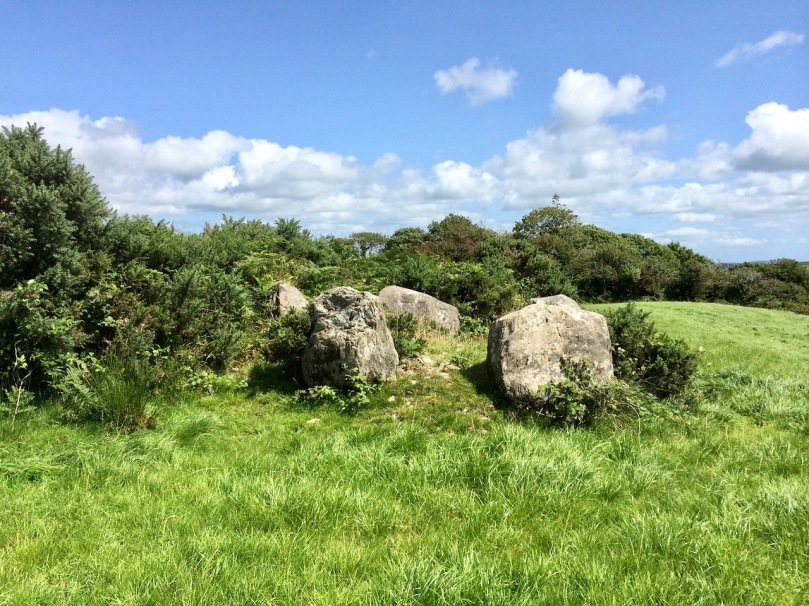 One thing we have noticed from our visits is that the Five-stone circles are differently situated from the Multiple-stone circles. Whereas Multiple-stone Circles are often on a bench on a hillside, with wide views in one direction and rising ground in the other directions (Drombeg is typical), Five-stone circles are often on flat ground in a valley or at the top of slight eminences (like Cullomane, above, and Cappaboy Beg and Inchireagh below) but usually with panoramic views all around. While we have noted this casually, we would need to go back and check these observations more carefully before being too categorical about them. 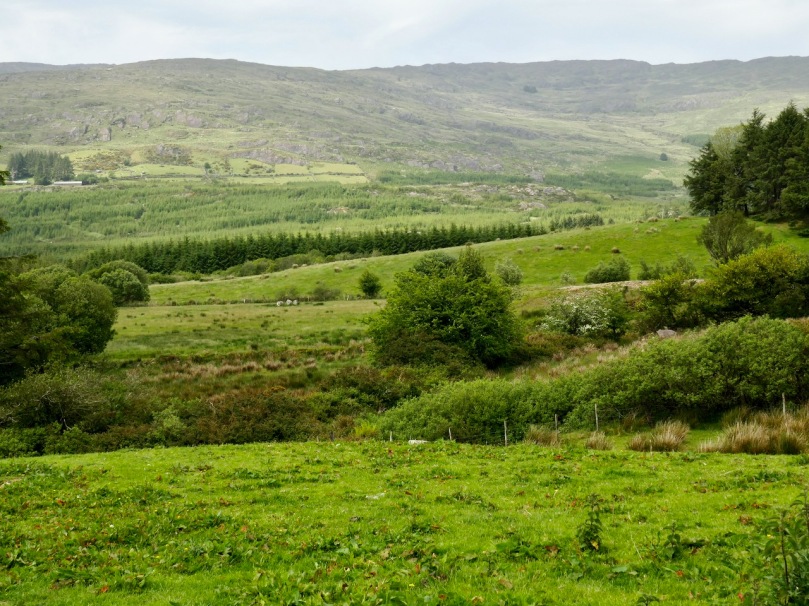 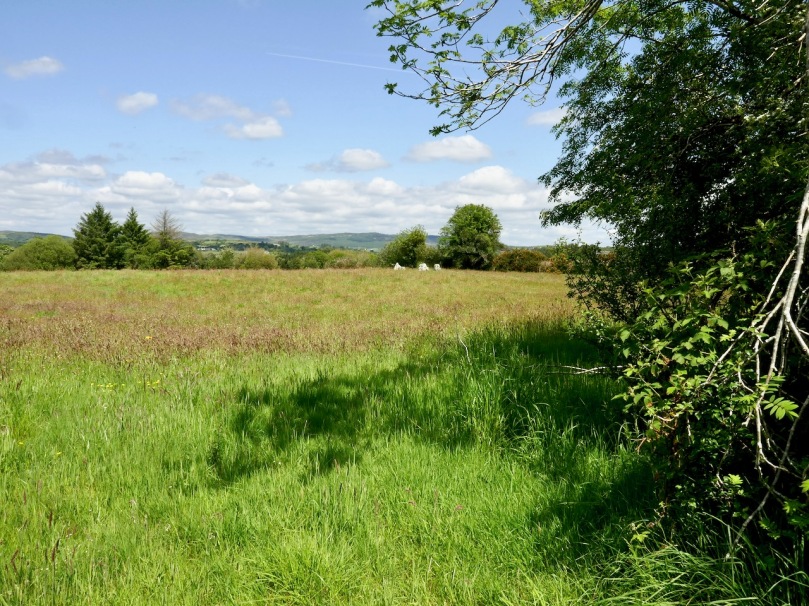 In my next post in this series I will get started on the Discussion – what conclusions can be drawn about the nature and purpose of Stone Circles? What do we know about who built them and why? And once again, thank you to Ej Carr for this superb shot of Uragh. 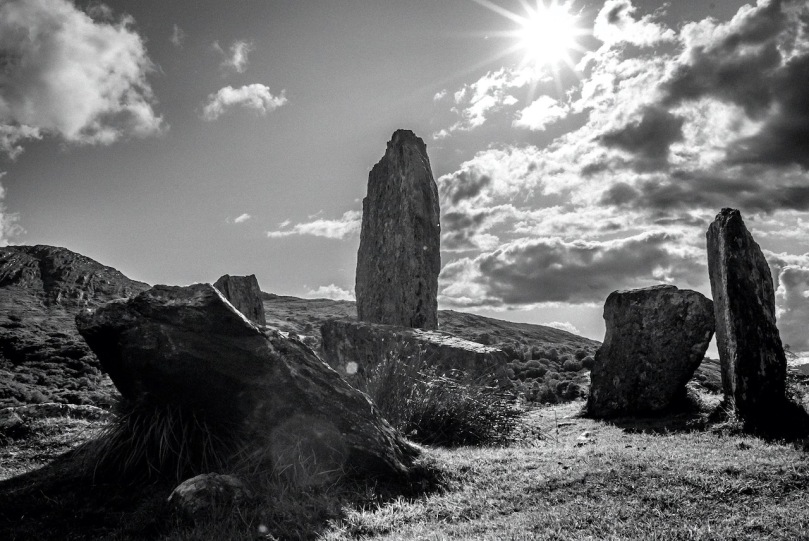