This lovely little Field Forget-me-not (chalked in the top photo, close-up above) is a metaphor what what we were trying to do in our West Cork villages

The Botany part is easy: it’s incredibly important to know what we have as we are losing species, many through loss of habitat or the use of herbicides. Urban environments are home to many wildflowers (no such thing as weeds!) all of which do important jobs in supporting the great chain of life by providing vital food, shelter and reproduction spaces to an enormous variety of insects.

Cleavers – you might know it as Stickelback or Goose Grass, and one of the Flying Column grew up calling it Robin-run-the-hedge. It has a very efficient way of getting you or your dog to transport its seeds

The Guerrilla part? Well, there is something subversive in writing and sketching what can be seen as graffiti on a footpath or a wall (but don’t worry – the first rainfall and it will be gone). It may even be slightly illegal, so ideally you deploy some level of stealth. However, the merry band in Schull yesterday, let’s call them Flying Column S, was having far too much fun to be deploying anything except their chalk.

When you name something you give it an identity. That encourages people to look more closely at it and maybe do a little research into it. We are seeing all kinds of Bird’s-foot Trefoil (below, overlooking Schull Harbour, with Red Clover) at the moment, springing up in our lawns and frankly wherever it gets a chance. But did you know that this gorgeous little yellow flower, a member of the Pea Family, is the larval food plant of the Common Blue Butterfly?

Most of the wildflowers we see around us in our towns and villages are native, but there are a few invasive aliens as well and it’s also important to know where they are and how they are reproducing. Japanese Knotweed is the most feared, for how difficult it is to get rid of, how damaging it can be, and for how it takes over vast areas of habitat, choking out native plants.

Buddleia, better known as Butterfly Bush, is beloved of butterflies for its abundance of nectar. But there is a dark side – it can become very invasive, and while butterflies love the nectar it provides it is not a butterfly host plant – that is, one that butterflies can use to deposit their larva, which will then feed on the leaves. In fact, over time, butterfly populations decline where Buddleia is left unchecked. The Buddleia below has not yet come into flower.

But there are other non-natives that are more benign. Mexican Fleabane (below with Greater Plantain) and Ivy-leaved Toadflax (a close-up – another photo is the last one in this post) both arrived here from elsewhere, but do not pose anything like the same level of threat. In fact they have settled in happily as neighbours.

But while they are certainly decorative and attractive to insects, it remains true that it is our native plants to which our native insects are best adapted.

Native, of course, can also be dangerous – several of our native plants are highly poisonous to humans including the beautiful Foxglove that is blooming everywhere right now and the attractive but deadly Woody Nightshade, below. It’s also known as Bittersweet. Children need to be warned to stay away from the inviting red berries of this plant later in the summer. 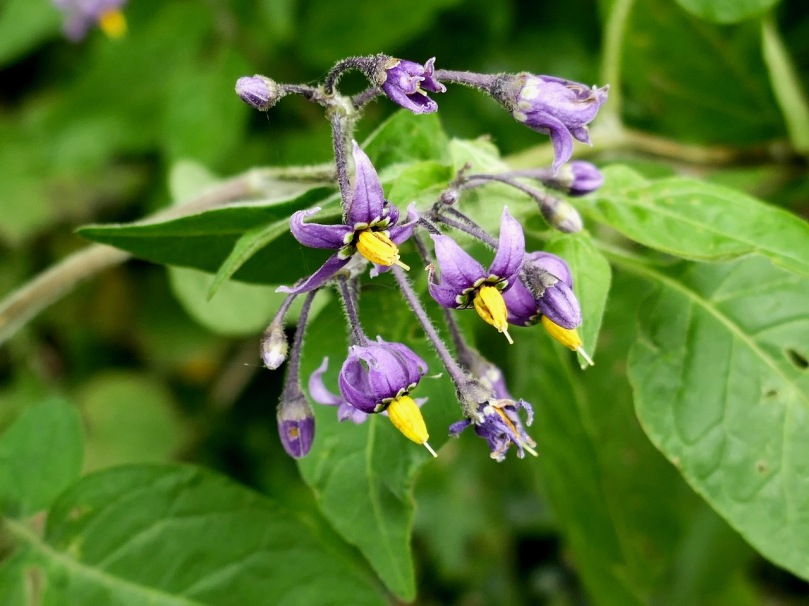 At first glance, we seem to see lots of dandelions, but most of the dandelions are gone over by now so what we are seeing are Sow-thistles, Nipplewort and most of all in West Cork, Cat’s-ear.

Cat’s-ear in Ballydehob, all mixed up with buttercups, daisies, White Clover, Club-rushed and grasses – an insect heaven

At the shore, marine species abound – take a look at my post on the Ballydehob Estuary – a haven for native wildflowers of all kinds. In Schull we chalked signs for Thrift (or Sea Pinks) and Kidney Vetch while in Ballydehob we pointed to Sea Radish and Sea Aster, the latter a plant that tolerates getting its feet wet in salt water.

Trees, too, deserve our attention. Con was delighted with the number of elm trees around Schull and he pointed out one of our native Ash trees along the way. The Sycamore which springs up everywhere, on the other hand, is not native to Ireland and can grow to provide a powerful canopy under which other seedlings fail to thrive. 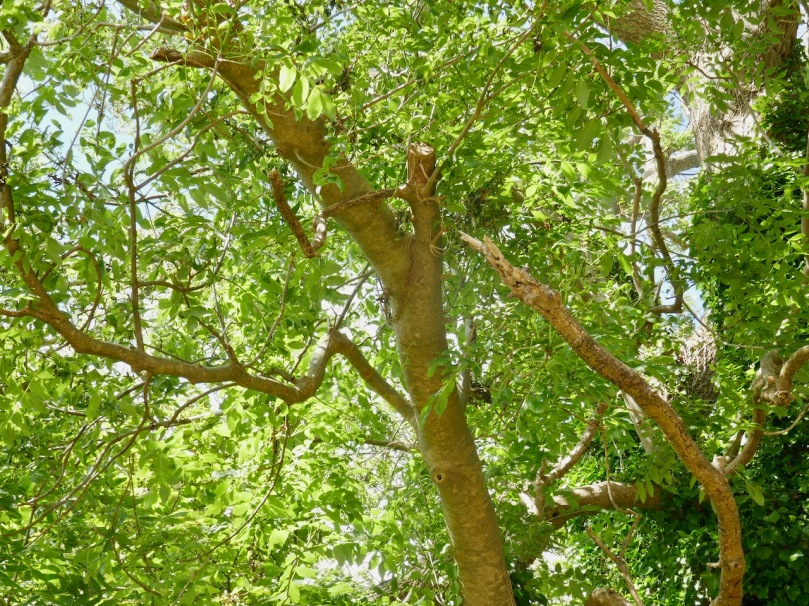 Herb-Robert is a perennial favourite but in Schull we found lots of its first cousin, Shining Crane’s-bill. The flower is very similar, although smaller, but the leaves are quite different, being round and glossy compared to Herb-Robert’s hairy fronds. Both turn an interesting red as they age. Bonus point to Karen for pointing out that this was not, in fact, Herb-Robert.

Some plants are so tiny and background-y that they are easily overlooked. A couple below – Procumbent Pearlwort and the charmingly named Mind-your-own-business. The second photo is a close-up of the Procumbent Pearlwort, showing its minuscule white flowers. 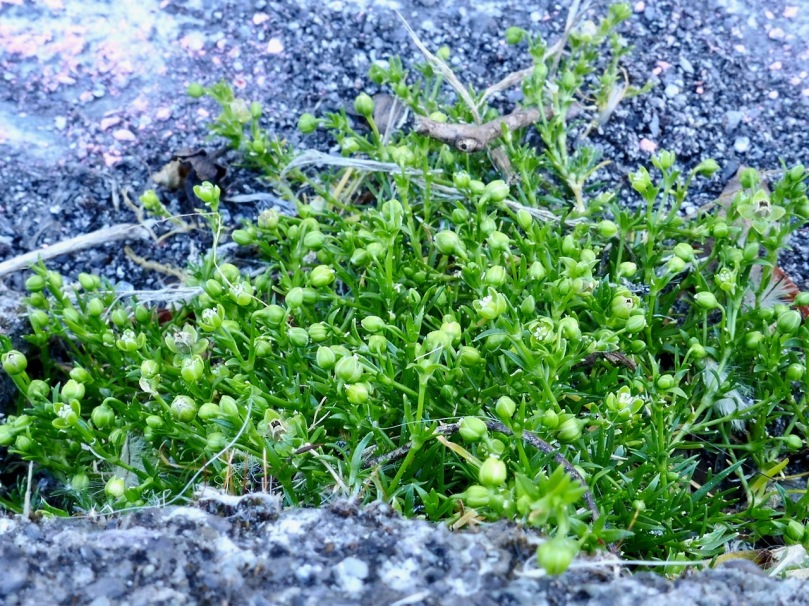 Foragers are the experts on what’s edible by humans – if you are interested in this, I highly recommend Forager Fred’s Facebook Page. One plant we did happen across in Schull was Pignut – I haven’t tried it myself, but apparently in the old days kids on their way to school would follow the stem down to the root with their fingers to find the little edible tubers. Any memories of that among our readers?

We identified lots more plants than I have room for here and we hoped that people would stop and take notice as they walk around the village and estuary of of Ballydehob and the Market car park and harbour road in Schull. 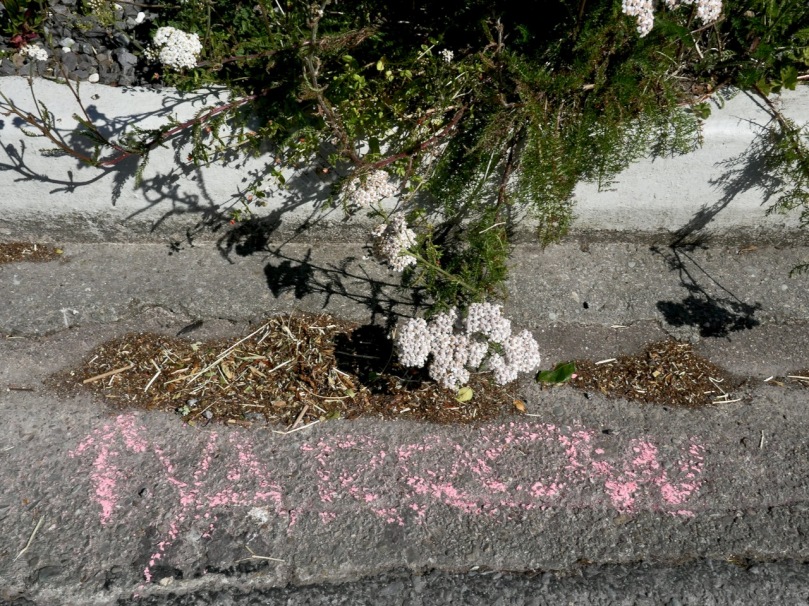 What do you think – is Guerrilla Botany a good idea? Why not get out and do some in your own community! 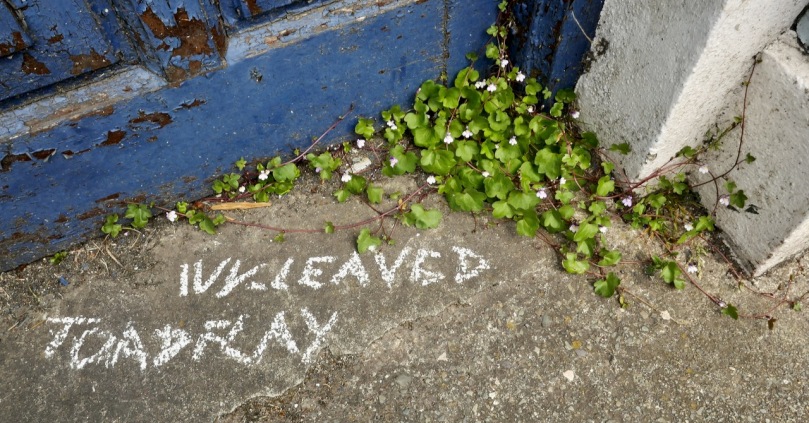