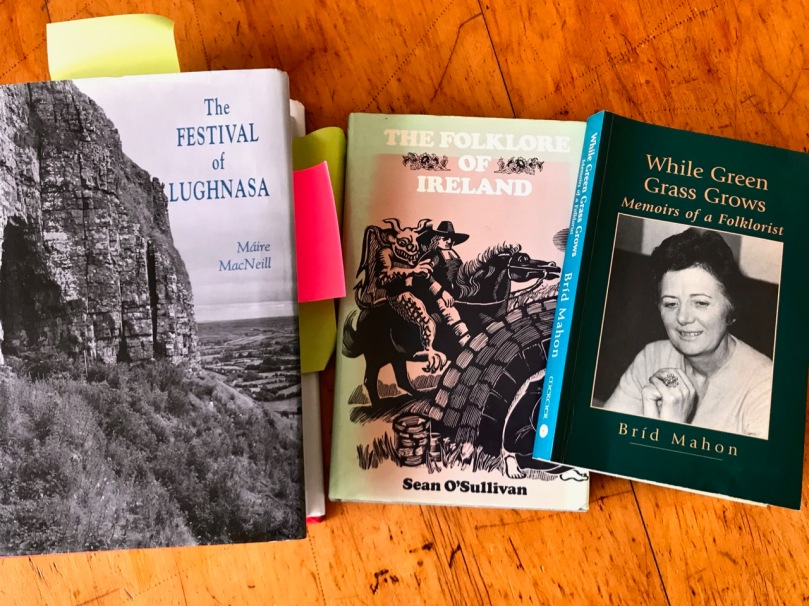 The Irish Folklore Commission was established in 1935 in Earlsford Terrace, Dublin – where turf fires burned regularly in the grates. In our library at Nead an Iolair are three books by researchers who gave much of their working lives to the Commission. Bríd Mahon, from Cork, was hired by the Commission as a temporary typist in October 1939. Ten years later she took over as office manager from Máire MacNeill, who was to marry: married women could not be civil servants in Ireland in those days! Seán O’Sullivan was the archivist of the Commission for the duration of its existence (1935 – 1971). In 1971 the project was absorbed by the Department of Irish Folklore, University College, Dublin. 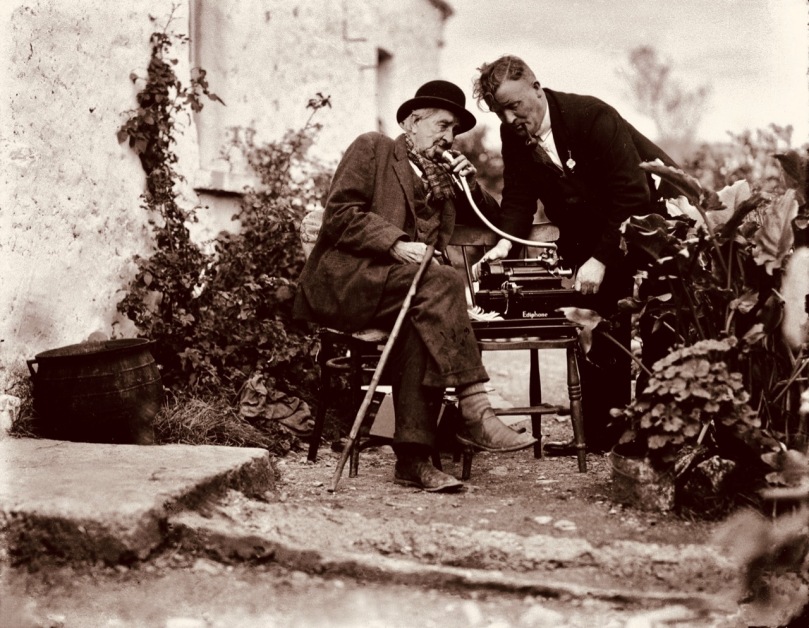 . . . The first things I noticed were the wicker basket heaped with sods of black turf beside an open fire and the smell of the blue peat smoke which I love. It was the first day as a raw recruit to the staff of the Irish Folklore Commission. One wall of the room was lined with manuscripts bound in dark leather. A small dark man was turning the handle of a machine. Shreds of wax from a long cylinder fell into a container. Seán O’Sullivan (1903 – 96), who was the archivist, explained that the wax cylinders he was paring were used by the collectors on clockwork dictating machines called Ediphones to record the tales and traditions of the Irish countryside. He said that they were a great improvement on the old method of taking down information by hand. The only drawback was that the Ediphones had to be carried by the collectors on bicycles, which made riding over stony roads difficult and up mountain paths near impossible . . .

The Second World War was drawing to a close, petrol was scarce and few people owned cars. The Commission employed five full-time collectors, who worked in places as far apart as the Dingle Peninsula in County Kerry and the Bluestacks in County Donegal. When the men had filled a dozen cylinders they transcribed the information onto blue notebooks, using indelible ink. These were sent back to Dublin, carefully packed in boxes. The notebooks were bound and kept in the Commission’s archives and the cylinders were pared and recycled . . .

From Bríd Mahon’s account of her time at the Irish Folklore Commission: While Green Grass Grows Mercier Press, 1998 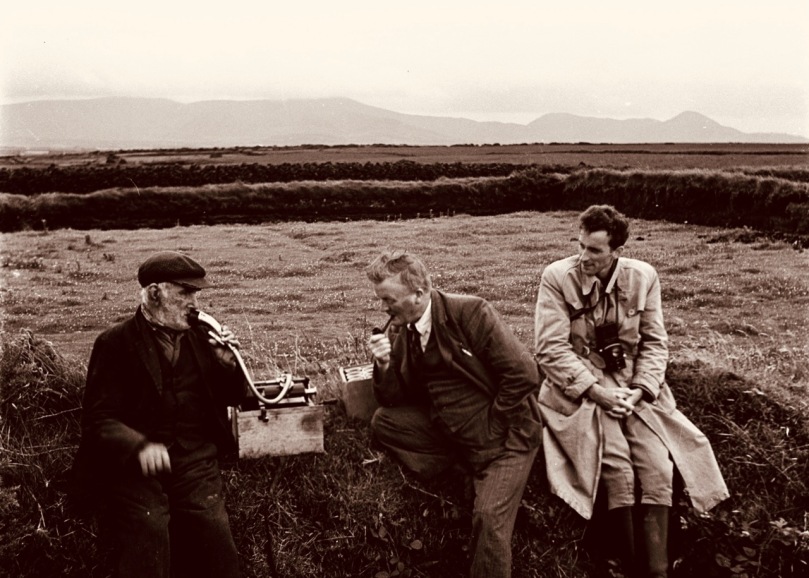 Bríd Mahon also relates how the Folklore Commission (which survived on a shoestring budget) acquired its Ediphone machines:

. . . In the 1930s Delargy [Séamus Ó Duilearga, Director of the Commission throughout its life] had gone on a lecture tour of America that entailed much travel and long train journeys. Coming to the end of his travels, he happened to find himself sharing a carriage with another traveller. They soon discovered a common interest – both were dedicated fishermen. As the night wore on they got talking about Ireland and the work of the Commission. Delargy remarked that gathering folklore was akin to fishing – both took time and patience. He described how for eight years he had spent every vacation in a remote hamlet in County Kerry, first helping with the housework, afterwards making himself as comfortable as he could on a bag of salt, while he wrote down from the dictation of one of Ireland’s great storytellers hundreds of legends, Fianna tales and miscellanea of folklore. ‘On a night in April 1931 Seán Ó Canaill told me the last tale in his repertoire,” Delargy told his listener. “A month later he was dead. It had been a race against time.”

Delargy’s travelling companion was impressed by the meeting. “I wish you well in your undertaking, Mr Delargy,” were his parting words as the train pulled into Grand Central Station, New York. But it wasn’t the end of the story. Delargy was scarcely back in Dublin when a consignment of Ediphone machines arrived with the compliments of the President of the Edison Company. The accompanying note read: “To a fellow traveller and fisher of men.” These Ediphones were used by the collectors for many years . . . 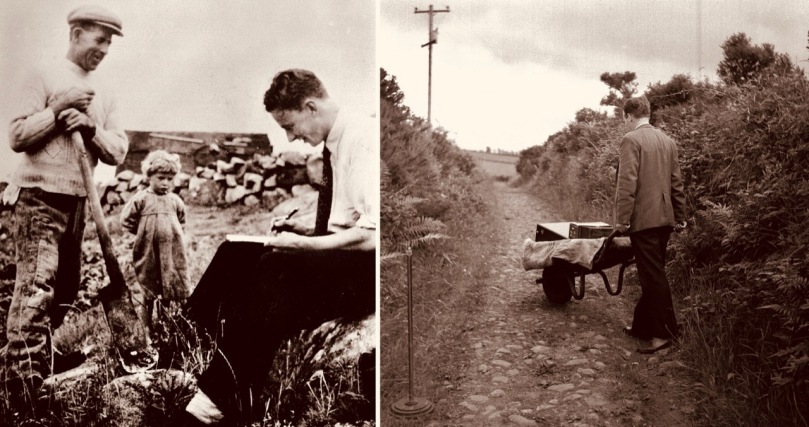 Left – Séamas Mac Aonghusa (Seamus Ennis) was responsible for recording over 2,000 songs and dance tunes while working for the Folklore Commission. Right – an Ediphone being transported in rural Ireland (1945)

It was the earliest known folktale, first discovered on Egyptian papyrus 3,250 years before. During my years with the Commission hundreds of variants of that far-flung story were gathered in remote hamlets on the western seaboard of Ireland, in parts of Munster, in northwest Ulster and from a group of travelling people on the borders of Wicklow and Wexford . . . 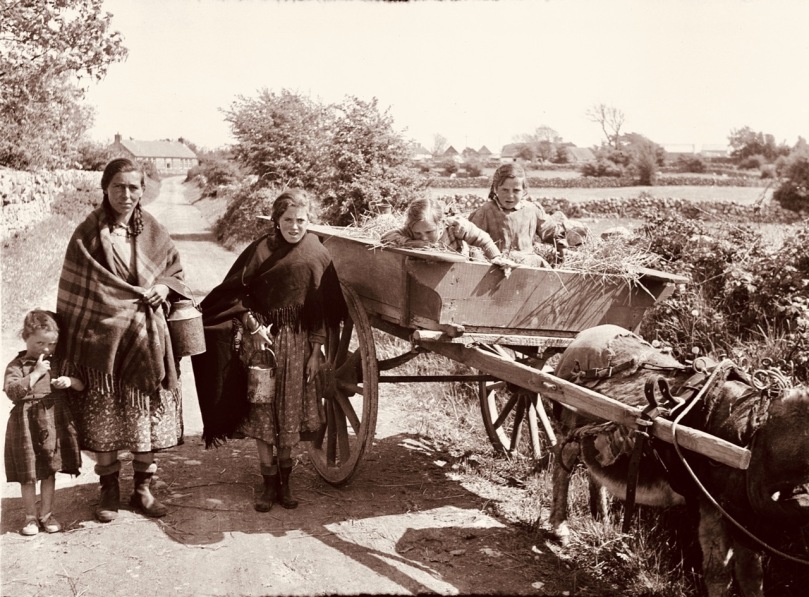 Nothing would satisfy me but to find a version of the ‘earliest known folktale’ to finish off this post. But, search high and low, the only example I could find is written in Irish and amounts to 5,000 words! With my very limited skills and many translation aids I have begun to work on the story. I’ll give you a taster, but the full tale will have to wait for another day:

Hugh and O, the Two Sons of the Salmon

It came out that there was a poor man whose only means of making a living was catching fish. If he came home with no fish, he wasn’t lucky. He could only do his best. The poor man had a wife for many years, but no children came to them, and they were both now well into old age.

On a day he was out fishing with his rod and a fine salmon came to him. It was hard work, but he reeled in the fish and was about to kill it when it spoke to him! “Don’t kill me’’ said the salmon, “Let me go and I will tell you a story of good fortune.”

The poor man was amazed to hear the salmon speak, but he replied: “I will hear the story and, if I am pleased, I will let you go”.

“Listen now”, said the salmon. “I know you have been upset that you have no children; I am glad to tell you that you will soon have two sons.”

“That is certain to be untrue”, said the fisherman.

“I am not telling you a lie”, said the salmon. “Let me go and you will see that I am telling you the truth.”

The fisherman cut the line and released the salmon. He returned home and told his wife the great news. She was not impressed. “It’s a pity you did not bring the salmon back with you: it’s clear that he was mocking you!”

Nevertheless, within the year the couple were surprised to have two sons. “Look now”, said the fisherman, “wasn’t it the truth that the salmon told me?”

“By my soul it was”, said the woman, “but what shall we call these two?”

‘We will call them É Mhic and Ó Bhradáin” said the fisherman. And so it was. They were known as Hugh and O, the Two Sons of the Salmon. You could not put anything between them in looks, manner or speech.

As the boys grew, so did the luck of the fisherman. Every time he went out with his rod his catch increased fourfold, and they became rich enough that each boy could have a hawk, a greyhound and a horse. The boys also had the luck with their hunting.

At twenty years of age Hugh told his brother that he would leave and seek his fortune in the world. “If I am not back in twelve months, then come and find me,” he said . . . 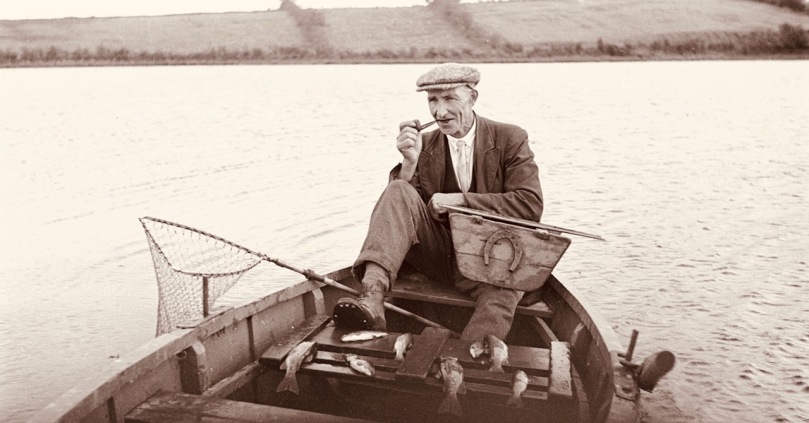