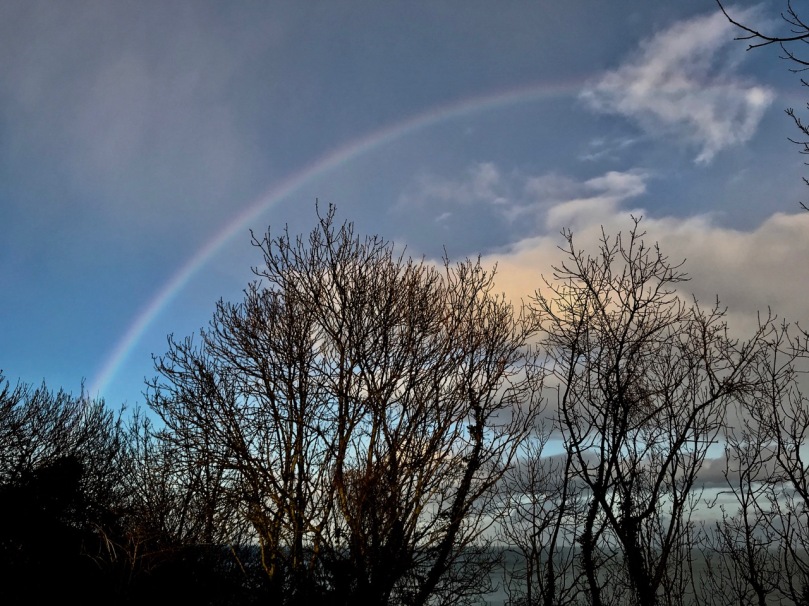 Storm Ciara was upon us as we headed over to the east coast – a mere few hops from Nead an Iolair. But it wasn’t all black clouds and thunder and lightning: winter storms here in Ireland feature high winds and spectacles such as this rainbow (above) which seemed to hang in the sky over County Wicklow for hours. When the rain comes, we often find refuge in a church – especially if it helps Finola’s quest for new stained glass windows. Sometimes they seem to reflect the weather patterns: 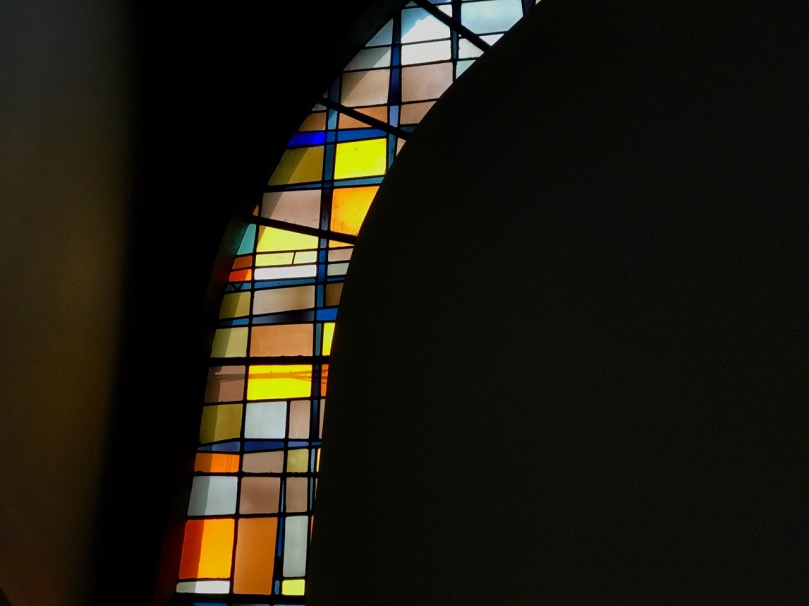 This panel, which could be seen as an indoor rainbow, is in an impressively large church in Ballyroan, Rathfarnham Parish, County Dublin: it was built in 1967 to seat a thousand. What caught my eyes was not the array of windows by Murphy Devitt (Finola has written extensively about this creative partnership), but two murals high on the walls of the crossing. I was delighted to find that these were painted by one of Ireland’s great artists working through the turbulent twentieth century – Seán Keating. 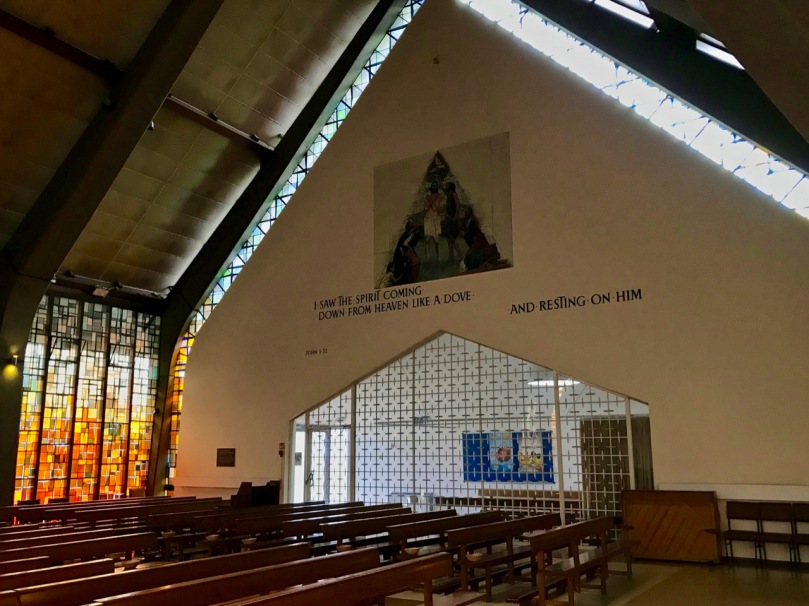 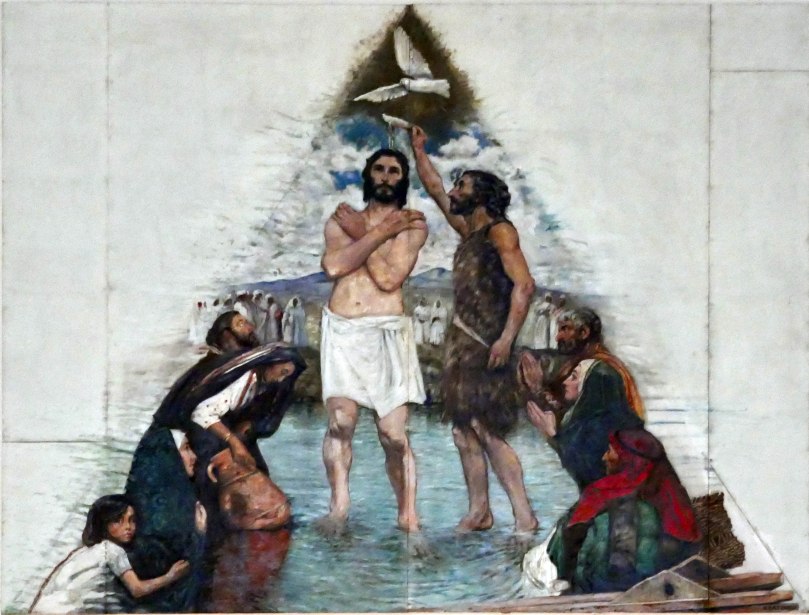 Seán Keating’s ‘Baptism of Christ’ mural in the Church of the Holy Spirit, Ballyroan

I am always surprised to find that Keating is under-appreciated: yes, he gets mentioned in books of art history, and is reasonably well represented in the state’s galleries. Yet you will also find terms such as ‘not great art’ applied to his work by critics and commentators. This is possibly because he is best known for his documentary work and, particularly, for his raw representations of the tempestuous years of Ireland’s struggle to gain independence. Here is ‘Men of the South’, dating from 1921 when there was a ceasefire in the Irish War of Independence while the Anglo-Irish Treaty was being negotiated and out of which the Irish Free State was born. 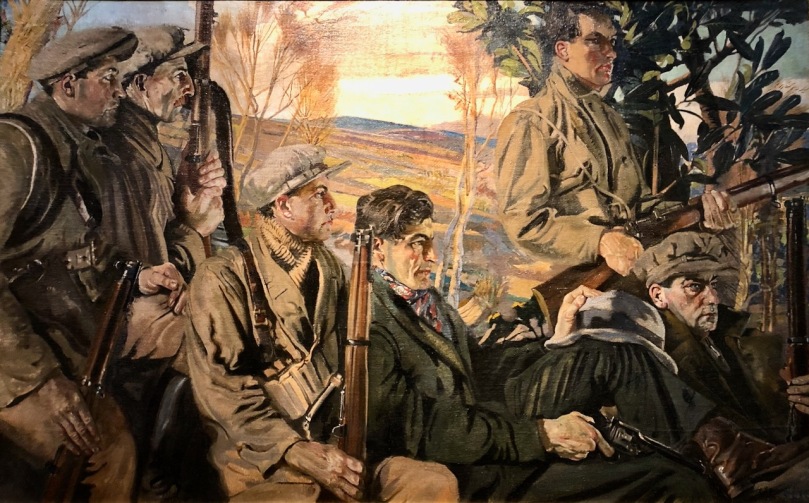 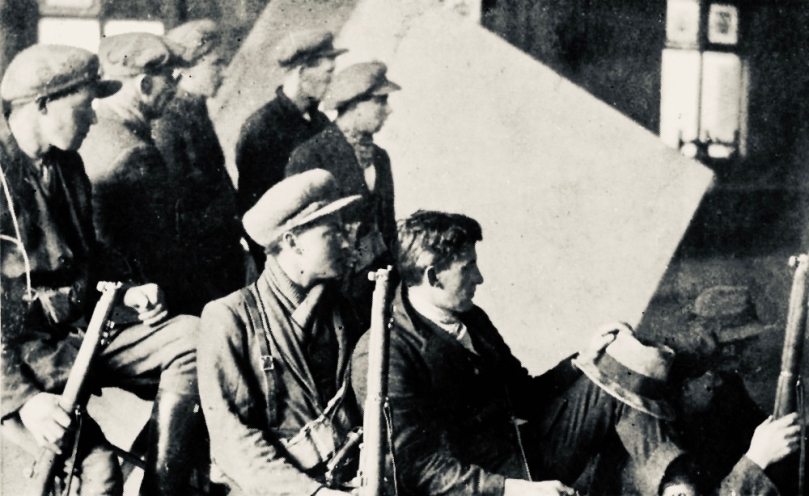 Top: Men of the South – Seán Keating’s documentary portrayal of the North Cork Brigade of the Irish Republican Army. Below the painting is one of the photographs taken in Keating’s Dublin studio in preparation for the work. Two versions of this painting were made by the artist: the one above is in the Crawford Gallery, Cork City, while the other (which depicts eight men) is now in Áras an Uachtaráin, the official residence of the President of Ireland. 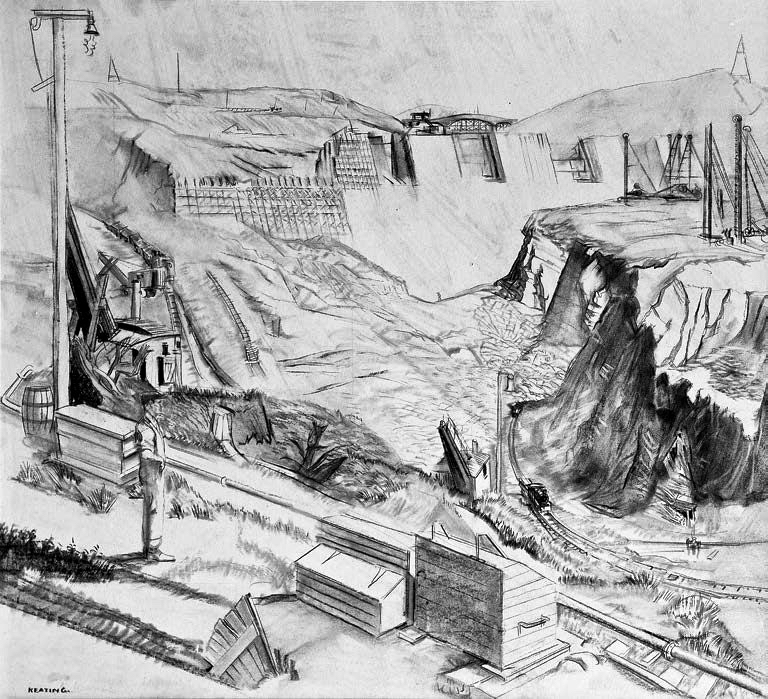 After the War of Independence and the abhorrent Civil War which followed it, Keating’s work concentrated on documenting the founding and burgeoning of the new State. Scenes of conflict were replaced by works showing industrial development, such as Ireland’s largest ever civil engineering contract: harnessing the power potential of the State’s major waterway, the River Shannon. The construction of a dam and hydro-electric generating station at Ardnacrusha, County Clare, together with a country-wide electric distribution infrastructure, was a symbol of major importance to the nation’s fledgling government. Keating began recording the work in 1926, soon after inception. No-one had commissioned him – he saw the significance of making dramatic documentary work of this nature, but his vision was eventually recognised by the Electricity Supply Board (ESB) – which now owns the largest collection of Keating’s paintings in Ireland. Above is one of the artist’s working sketches of the dam under construction. 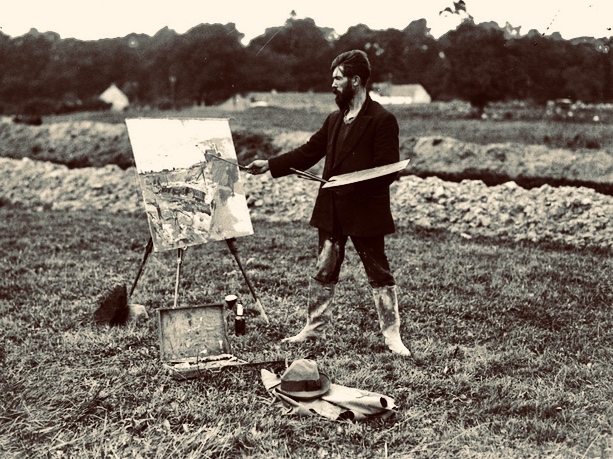 Keating studied under William Orpen in Dublin. He was to become one of Orpen’s important pupils (and, latterly, his assistant) and his documentary painting style owes a debt to his teacher. One of his famous early paintings is Thinking Out Gobnet (below), a portrait of his good friend Harry Clarke, dating from 1917. Keating and Clarke frequently visited the Aran Islands together. The painting shows Clarke sitting on a grave slab within the ruins of Teampall Chaomháin (St Kevin’s church) on Inis Oírr, along with a holy water font at his feet, and a holy well to the bottom right of the image. The suggestion is that Clarke is finding inspiration for his series of eleven windows for the Honan Chapel, Cork, which include a fine representation of St Gobnet. The ‘healing’ symbolism of the holy water and well are deliberate references to Clarke’s TB, the illness which ended his life at the age of 41. 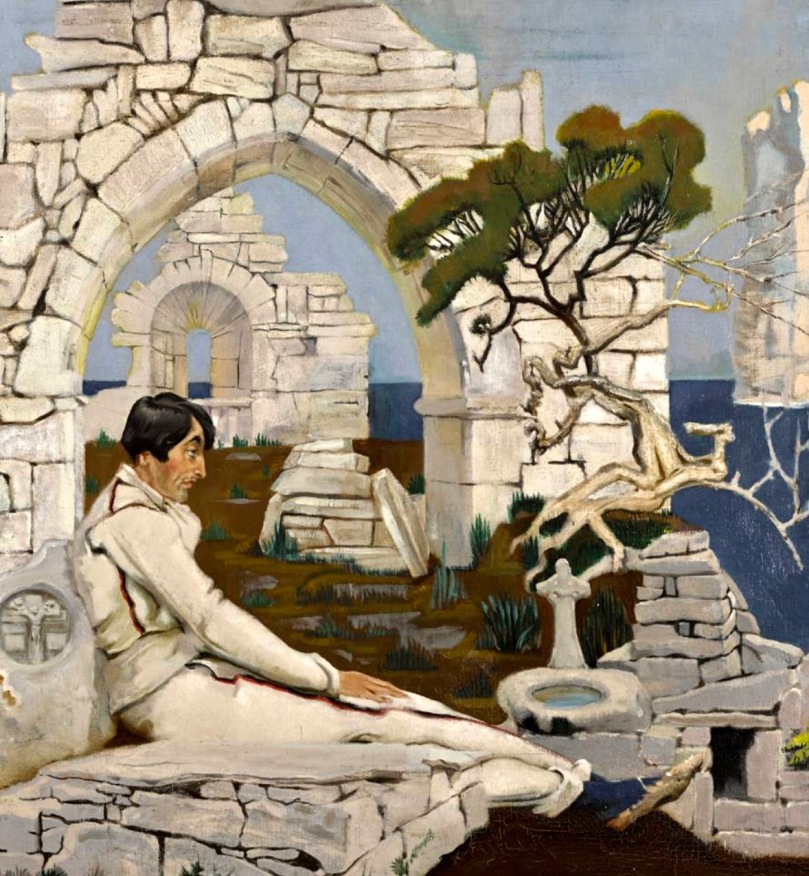 Seán Keating was always a committed Catholic, and we have seen many examples of his artwork in churches, including the murals at Ballyroan. Most striking, perhaps, are the Stations of the Cross which he painted for St John’s Church, Tralee – the church which features in Finola’s wonderful Irish Arts Review article (and RWJ blog post) about Ireland’s Newest Stained Glass Window. 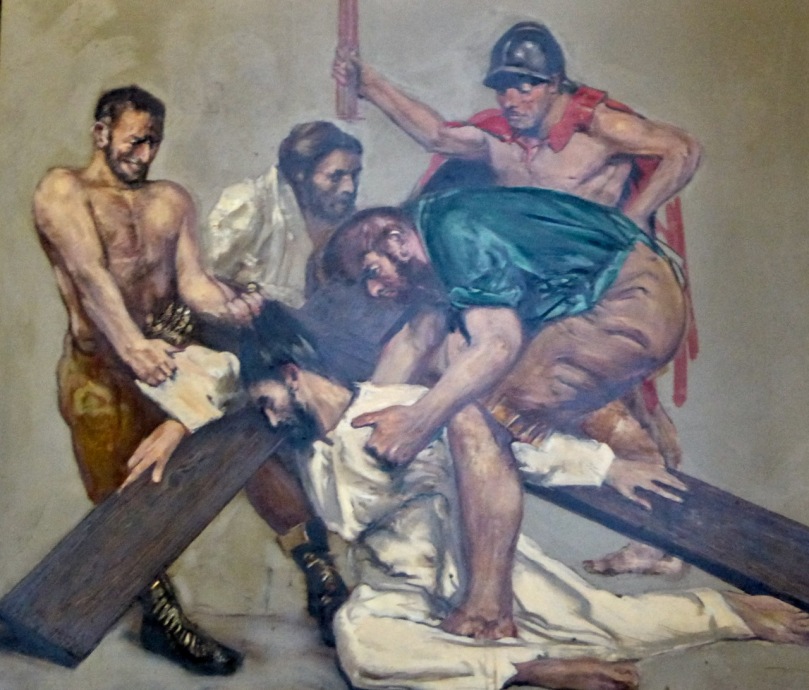 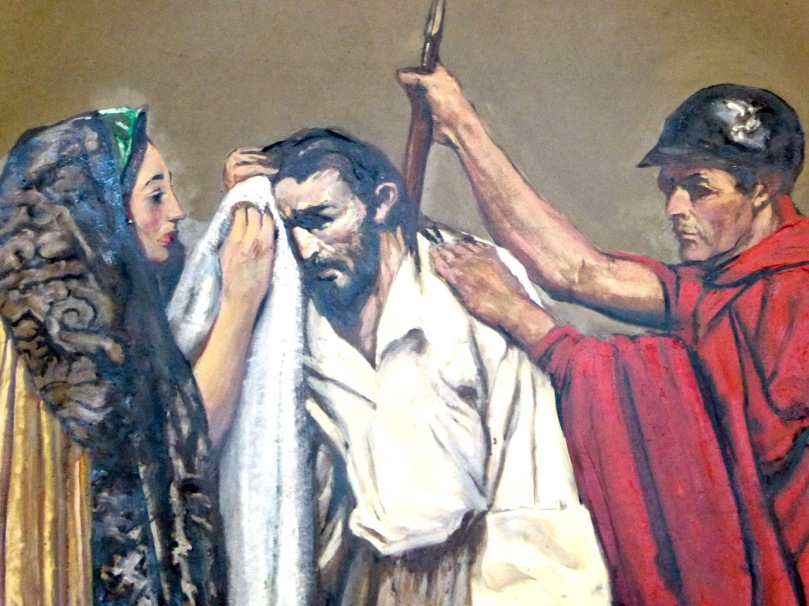 Back to Ballyroan: while we were sheltering from the tempest and admiring the church architecture, and the murals, I was delighted to find out that Seán Keating had lived for much of his life just down the road, in Ballyboden, in a house which he had designed himself. He attended mass regularly at Ballyroan until his death in December 1977, aged 88. 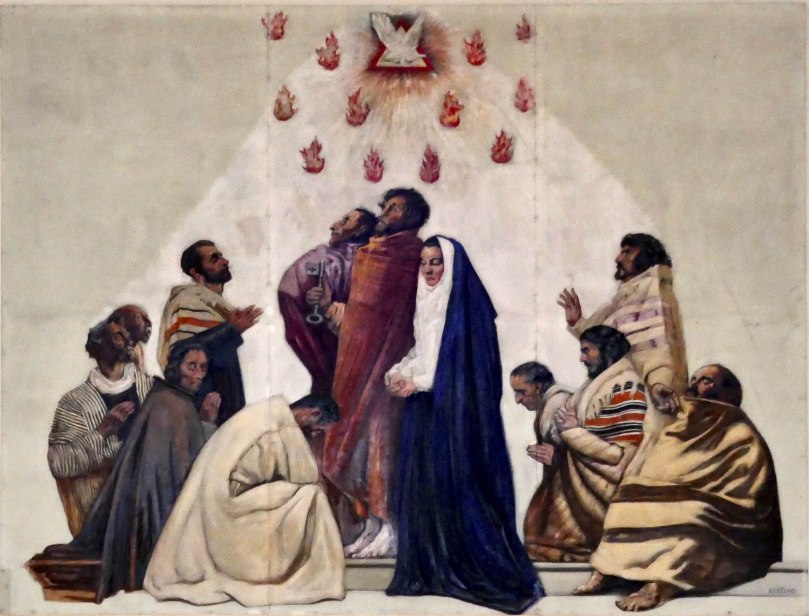 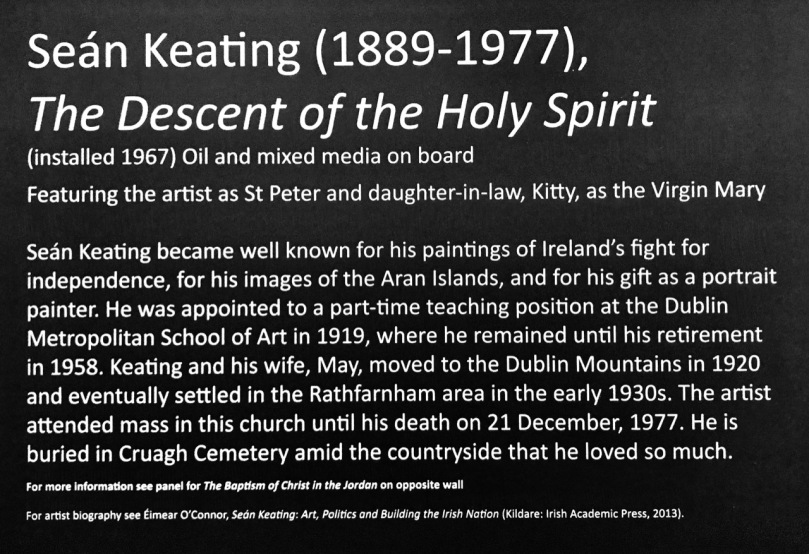 Keating’s mural The Descent of the Holy Spirit in his own church of Ballyroan, Parish of Rathfarnham, installed in 1967

We discovered that Keating is buried in the nearby Cruagh Cemetery, so we had to head out into the storm again to find his grave. It is as unassuming as he apparently was in life: a visitor would not be aware that herein lies one of modern Ireland’s greats. 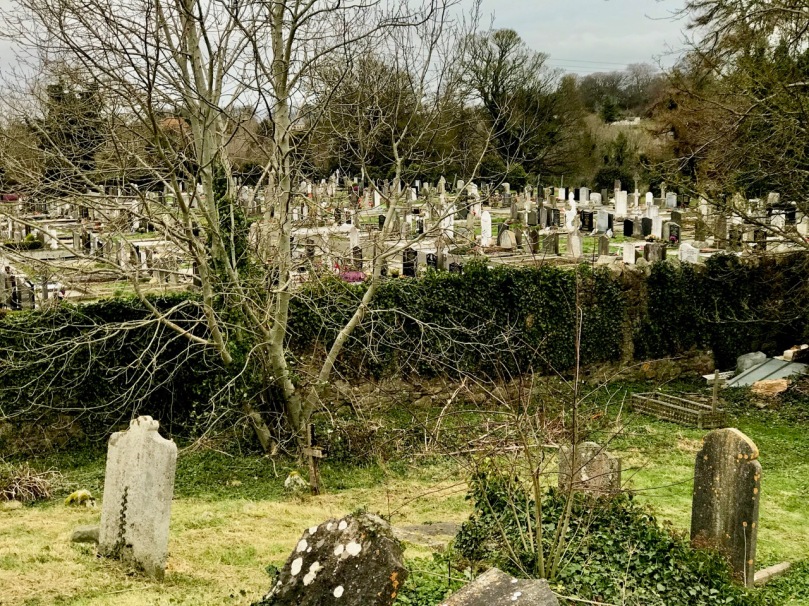 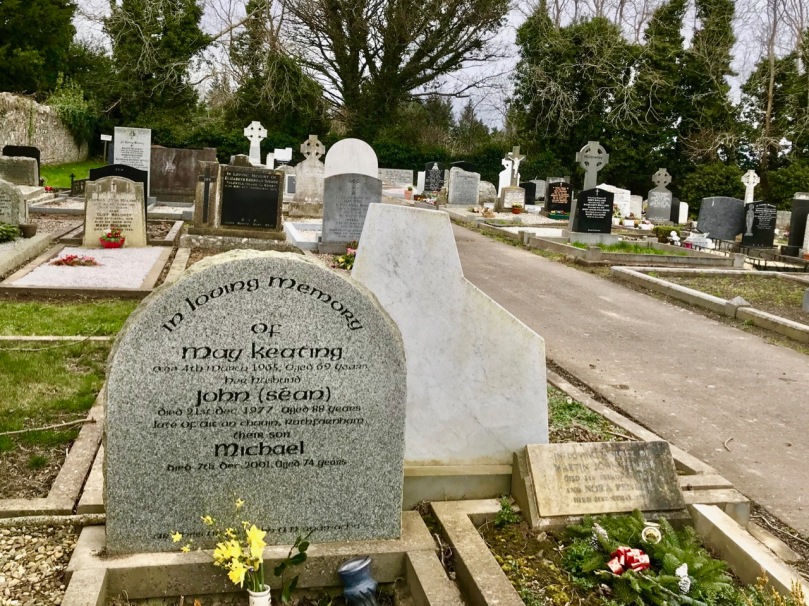 Cruagh Cemetery, Co Dublin (top) is the resting place of Seán Keating. His grave is shared with his wife, May, and son Michael

Our little artist’s memoir is almost over. The gale continued with ferocious lashing rain: cold and hungry we made a beeline for the local pub – the Merry Ploughboy, evidently a famous music venue. It was warm and welcoming, and full of a crowd watching Six Nations Rugby on the big screen (Ireland won the match). 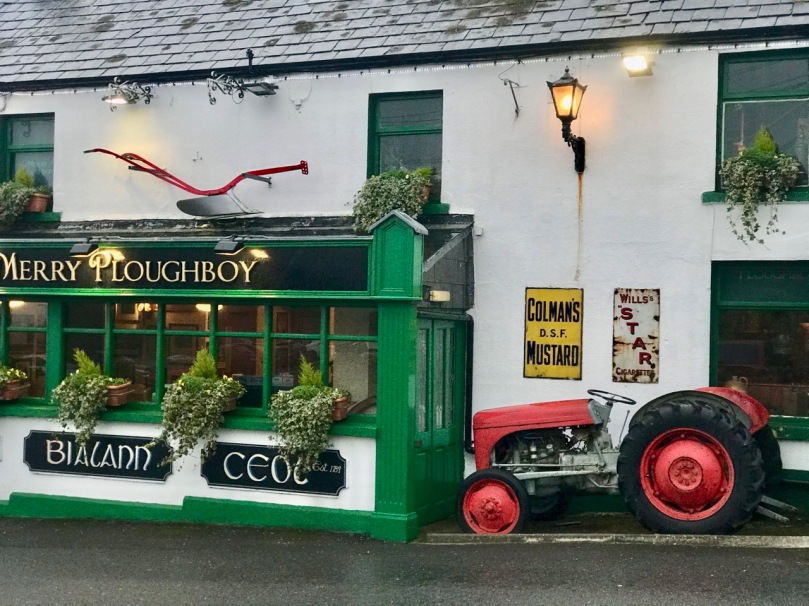 In the lounge we were intrigued to find an oblique reference to Seán Keating – a painting which has a nod to his style but is by a different artist! 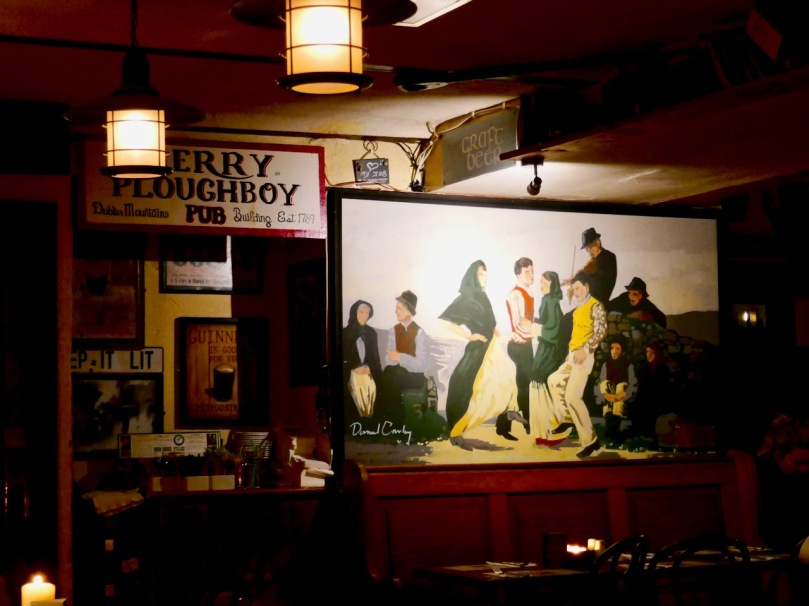 We agreed that our day trip to the east, in the teeth of the gale, was a memorable way to discover the life, work and death of one of Ireland’s significant artists. 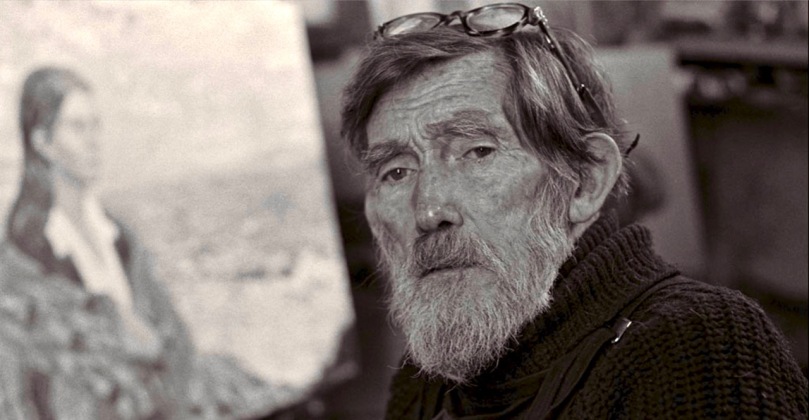 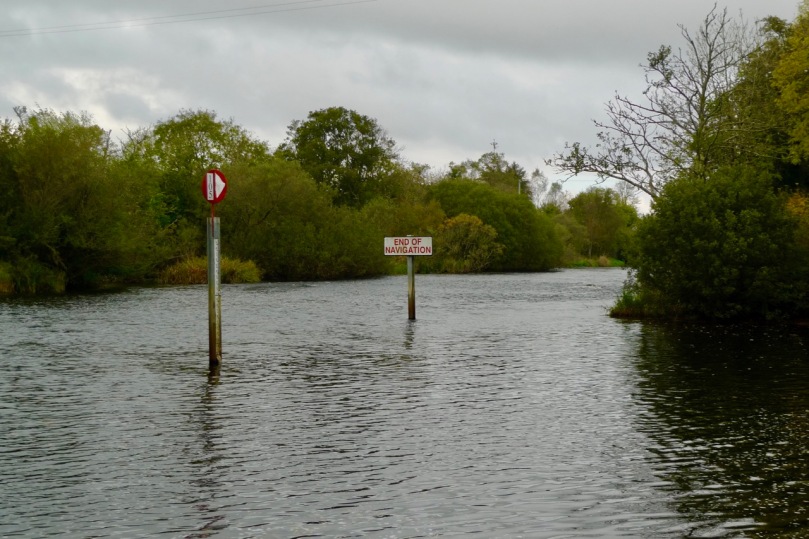 In 1946, the Rolts travelled to the upper limit of the Shannon Navigation in their borrowed boat, Le Coq. In 2016, exactly seventy years later, we followed them and found ourselves in Battlebridge, Co Leitrim. The Rolts’ travels – and our journey retracing their steps – have been the subject of a series of posts on this blog, and there are still a few more to come! 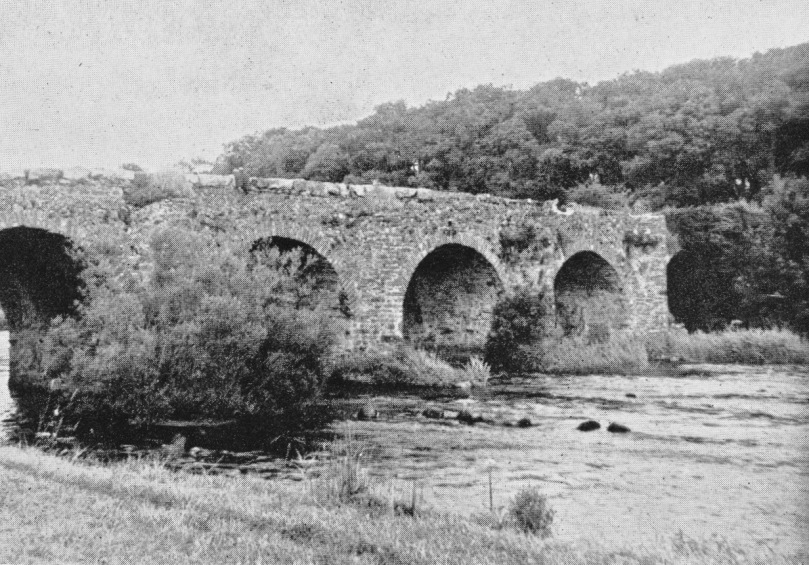 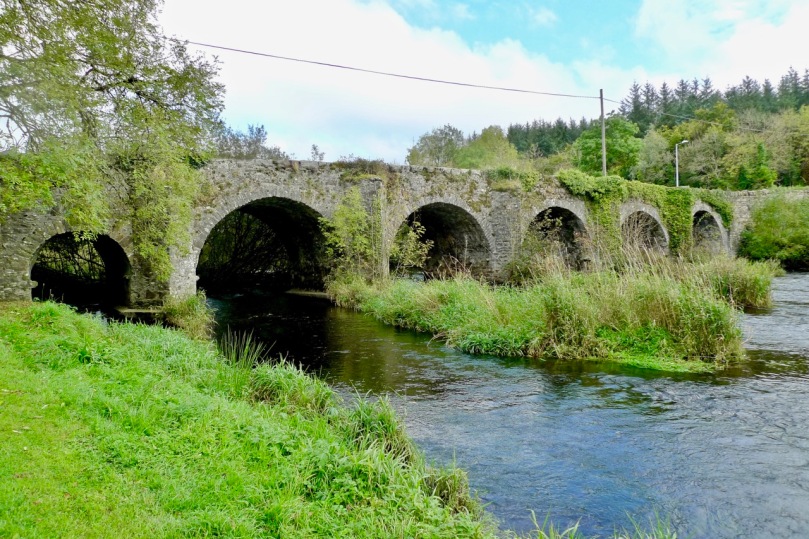 Upper picture: Angels Rolt’s photograph of the historic Battlebridge, taken in 1946. Lower picture: we revisited the site in 2016 – very little has changed

Battlebridge is still the ‘end of navigation’ on the Shannon itself. But, interestingly, it is now possible to travel by water much further north – something the Rolts were unable to do.

…It was but a brief journey to Battlebridge where the Shannon becomes a shallow stream brawling over boulder strewn rapids under the arches of the fine old bridge. Here, in the last few yards of deep water, we came about to moor to two trees beside the bank at the tail of the ruined entrance lock of the Lough Allen Canal. It was a delightful mooring, secure, secluded and sheltered, the country round being undulating and well-wooded, for we had now left the level plain for the fringe of the broken, lake-studded country of central Leitrim… (Green and Silver L T C Rolt, George Allen and Unwin 1949) 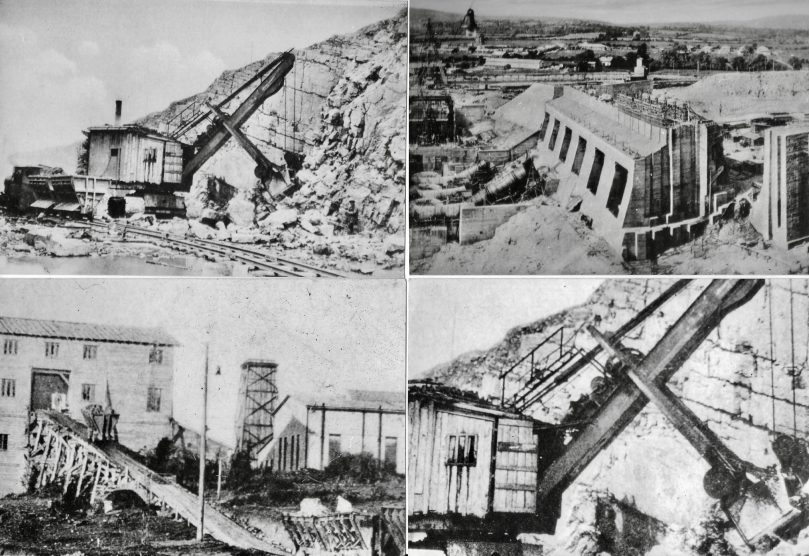 The huge Ardnacrusha power station – in its day the largest hydroelectric generating scheme in the world – under construction in 1925: it was completed and opened on 22 July 1929 and, by 1935, was producing 80% of all electricity in the Free State

The Lough Allen Canal connected the Shannon Navigation to the Lough: it was first opened in 1817. Boats would trade to quays on the lake with grain and return with sand or with coal from the Arigna mines. The fate of the canal was sealed when Lough Allen became a storage reservoir for the great hydro-electric station at Ardnacrusha. To increase its capacity, the level of the lake was raised by dam to a height above the old canal banks.

…The last trading boat left the Lough Allen Canal in 1927, while the last pleasure craft battled its way through the weeds in 1932. The lock-keeper, young Sean Nangle, still lived in the neat, freshly white-washed cottage beside the ruined entrance lock, but his duties were confined to bank ranging on the reach of the river below. Le Coq was the first craft to visit Battlebridge for seven years, so that our arrival was a minor sensation, and it was with a sense of newly discovered importance that Sean signed his name on our pass… (Green and Silver) 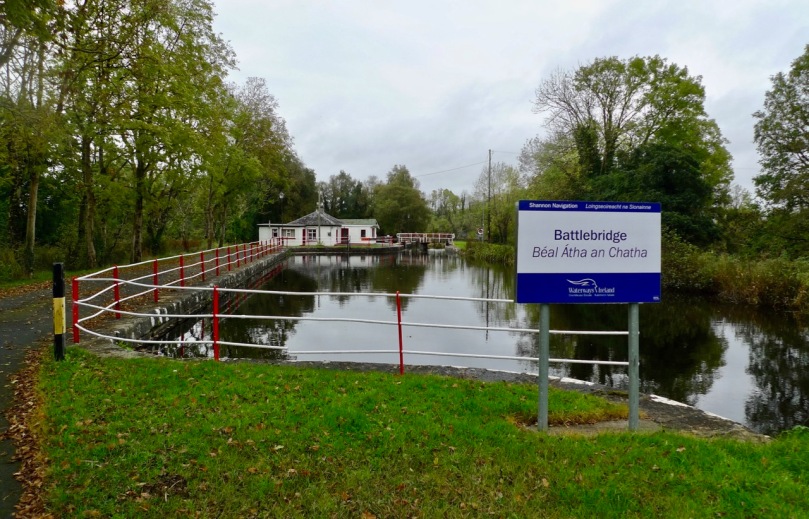 Battlebridge Lock, the first lock on the now restored Lough Allen Canal. The cottage in the distance was the home of ‘young’ Sean Nangle in 1946

One thing that the Rolts might never have anticipated was the revival of the Irish canals which has come about during the seventy years since their adventures, mainly during the economic boom of the decade or so from the mid 1990s. A cross-border authority – Waterways Ireland – is now responsible for a significant network of canal and river navigations within the island, including many that have been re-established. One is the Lough Allen Canal, now providing access from the Shannon to Upper Lough Erne in County Fermanagh, Northern Ireland.

…That evening Sean accompanied us to the inn which stood by the road side just across the old bridge, and a grand friendly house it proved to be. Nowhere in rural Ireland did we find any lack of kindness, hospitality and friendship, but in these respects this little inn at Battlebridge is particularly memorable. For this, credit must go to the Beirne family, mother, daughter and son. I will not attempt to characterize them; they speak for themselves in their photograph. Leaning against the counter in the bare whitewashed bar we enjoyed the best glass of ‘single’ porter that we found on our travels, while intruding chickens pecked unconcerned about our feet. Through an open doorway a turf fire glowed in a wide open hearth equipped with crane and ratchet hook. Upon the fire reposed a squat, black pot-oven with more smouldering turf upon its lid… Conversation was interrupted when a drove of bullocks passed by with a soft patter of hooves. Everyone crowded to the door to comment and criticize and to speculate where they had come from and whither they were bound, an argument which was settled when the drover himself stepped in for a glass… (Green and Silver) 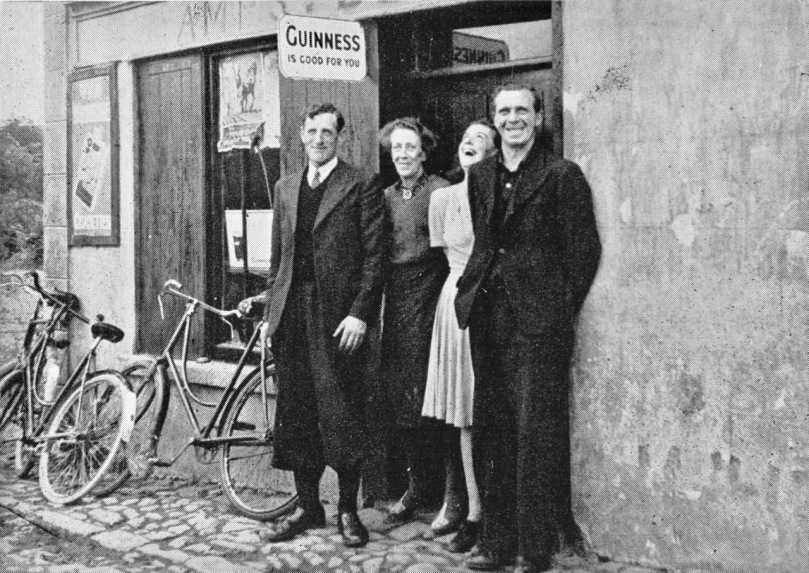 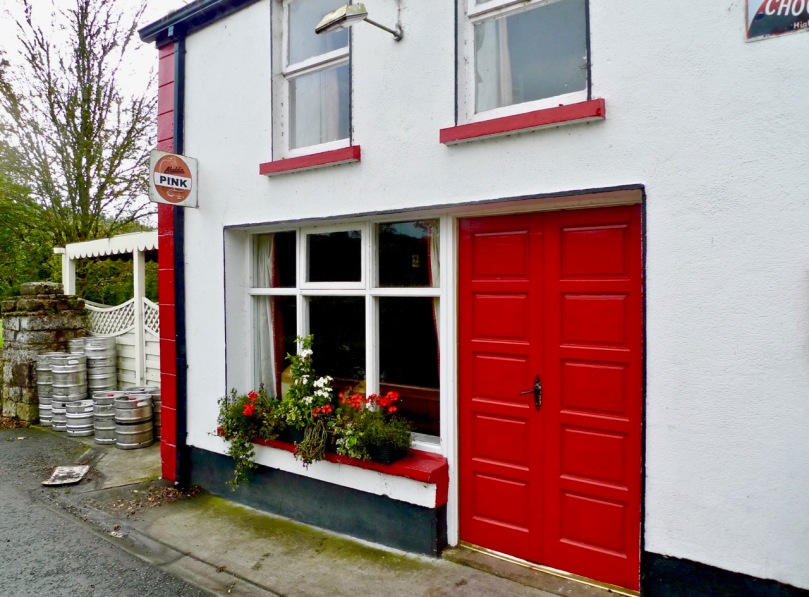 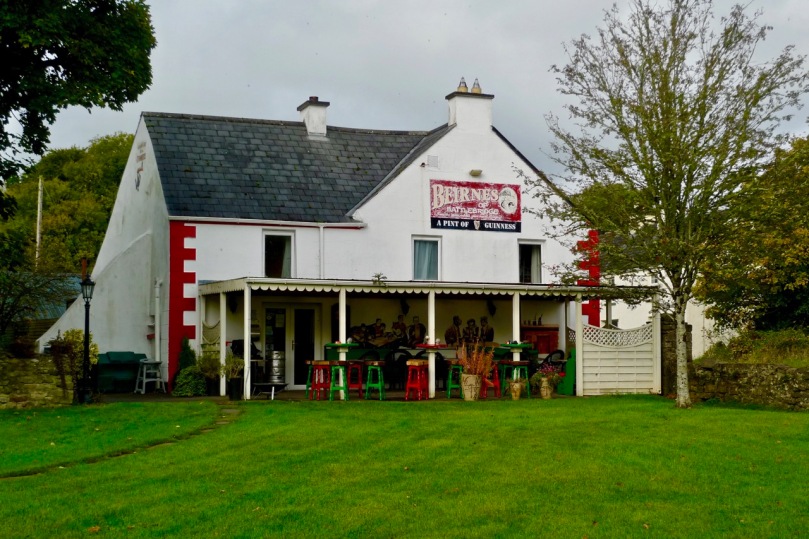 The re-opening of the Lough Allen Canal was heralded triumphantly in April 1996. I was pleased to find an archived RTE news report on that event. The official cutting of the tape was carried out by the Minister for Arts, Culture and the Gaeltacht – Michael D Higgins, now our President. 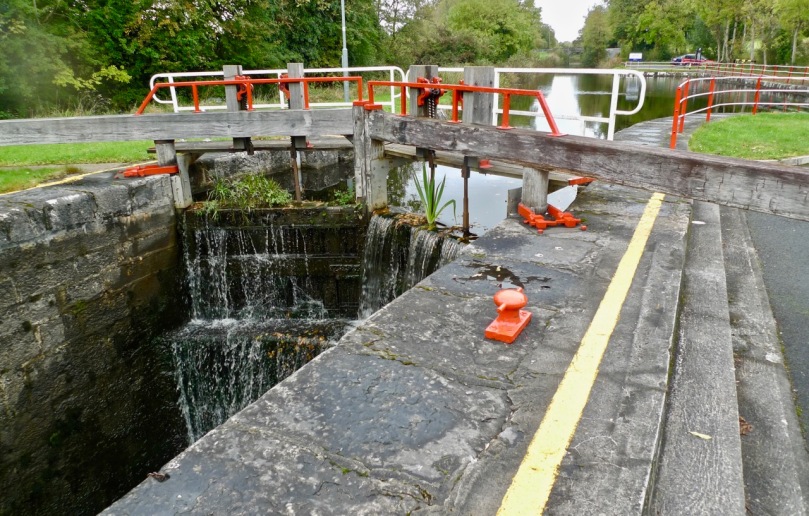 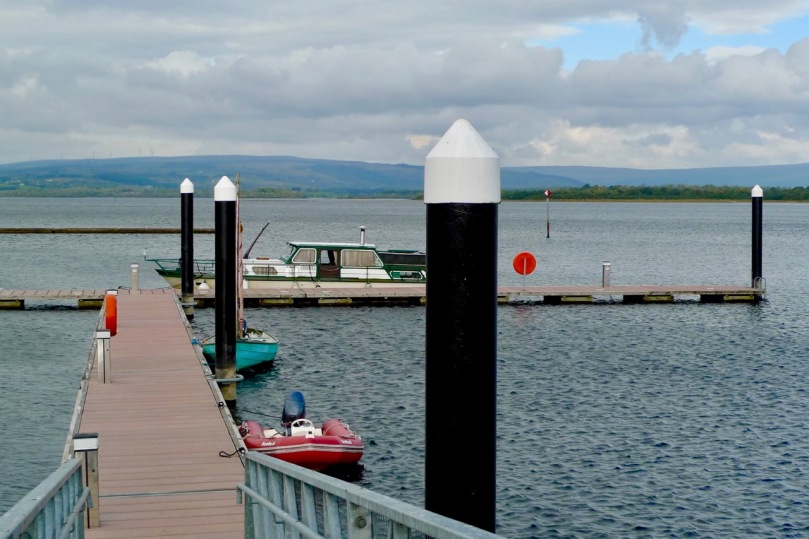 Upper picture: the lock at Battlebridge on the restored canal. Lower picture: Lough Allen today. Below: A mural on the garden terrace of Beirnes Bar 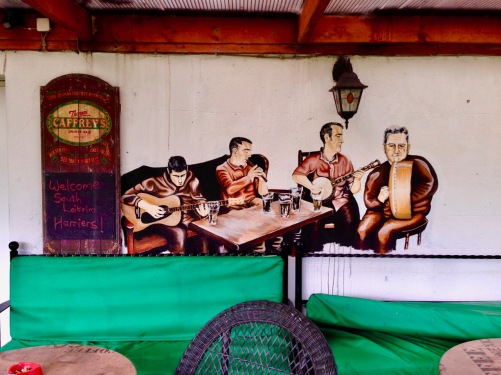