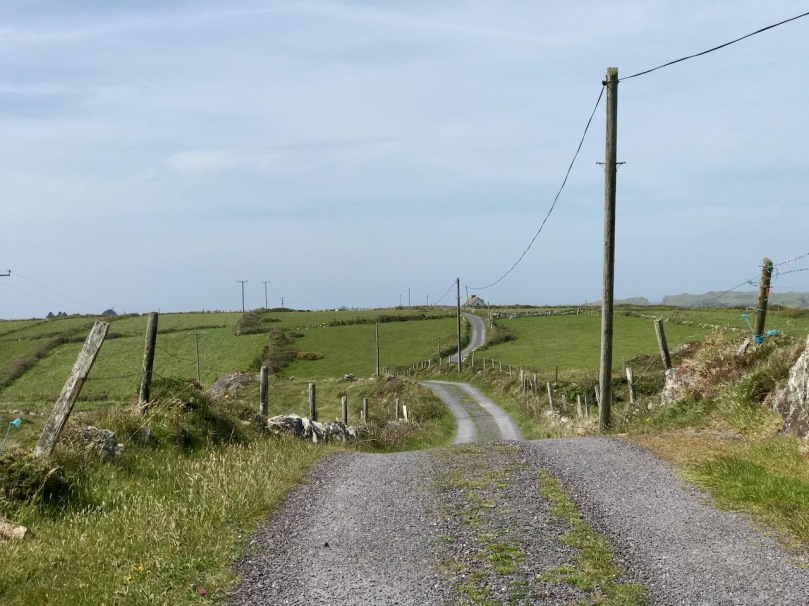 (from Thomas Osborne Davis The Sack of Baltimore 1844)

Up here in Nead an Iolair (Eagle’s Nest) we look out over the Carbery Islands. There are supposed to be a hundred of them, although some are just little rocky outcrops: the tips of underwater mountains at the margins – and the mercy – of the Atlantic. 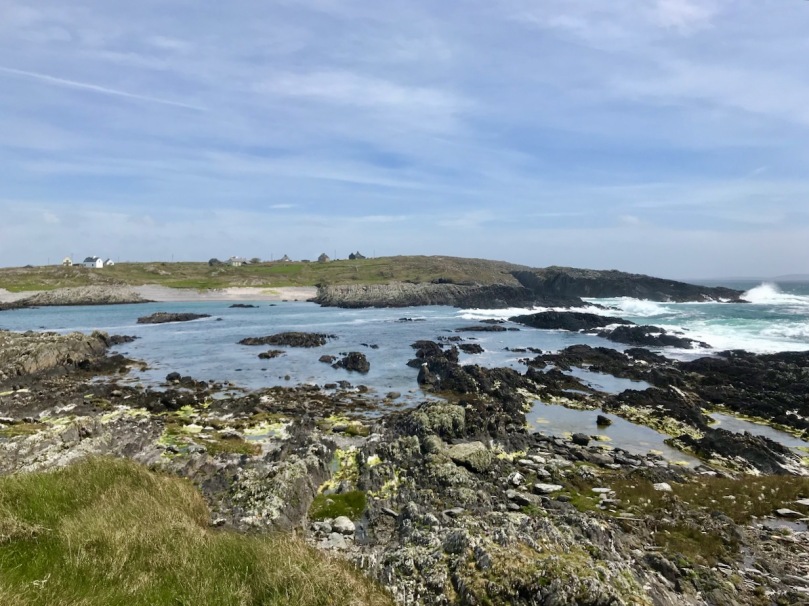 Horse Island, Castle Island and Long Island lie along the length of the coast below us. Peter Somerville-Large (The Coast of West Cork 1972) quotes a tradition that they all used to be one island:

In the latter end of March, AD 830, Hugh Domdighe being monarch of Ireland, there happened terrible shocks of thunder and lightning . . . At the same time the sea broke through the banks in a most violent manner, The Island, then called Innisfadda, on the west coast of this country was forced asunder and divided into three parts.

Long Island is still known as Inis Fada in the Irish language: the Anglicised name is a direct translation; header – the long road that winds from East to West on Long Island; second picture – the Wester village seen above the Atlantic breakers on the wild and battered far shore

We had a day’s adventure on the island, walking almost the full length of it; Finola was madly busy identifying all the wildflowers. It’s part of the magic of Long Island that we covered a distance of over 10 kilometres in the day, although the length of the island tip to tip is just over 4k. There is a regular ferry to the island from Colla Pier (not every day of the week), but we chose to travel from Schull pier with Helen of Schull Sea Safari (a whale watching trip with Helen will be a future outing for us). Our mode of transport was Helen’s very fine large RIB, the Kealtra – superbly equipped. With a hard south-easterly wind the waters were very choppy and we had to be fully kitted out for the crossing! 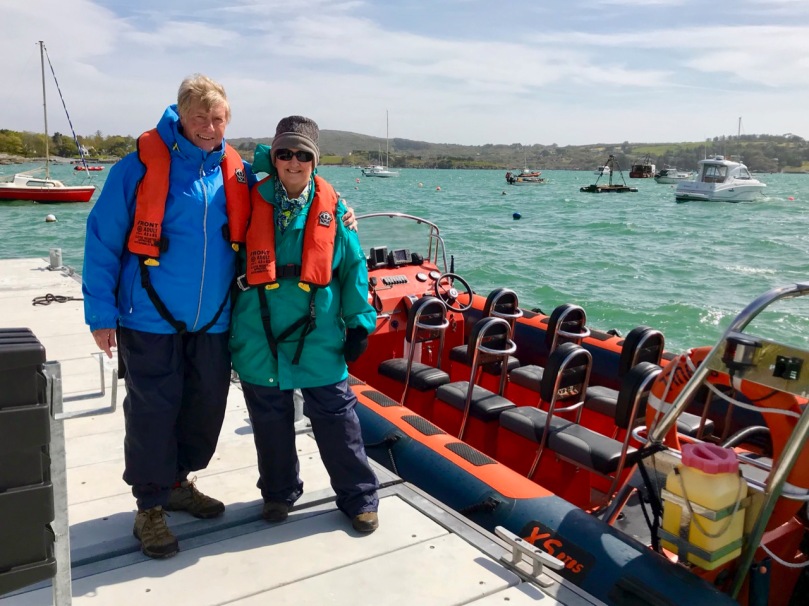 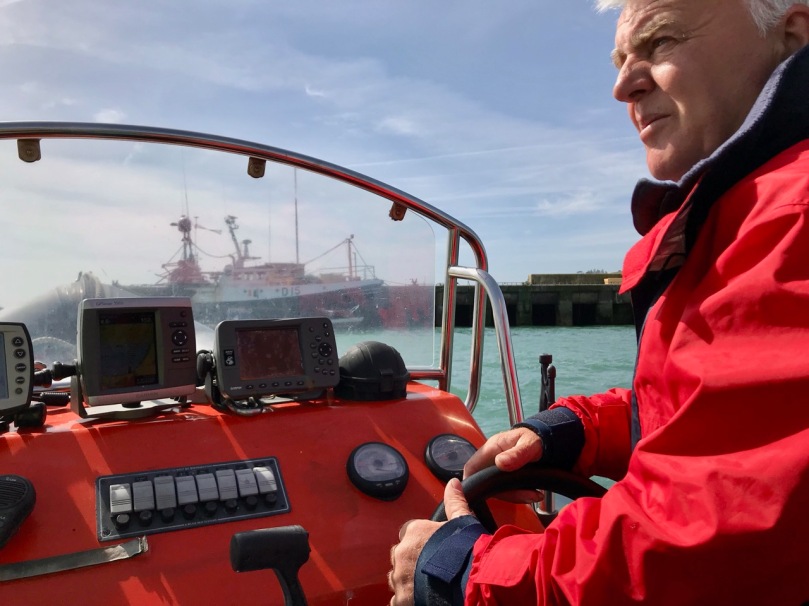 Upper – intrepid travellers kitted out for a choppy crossing on the Kealtra! Lower – skipper Donie taking the RIB out of Schull Harbour

After the heady excitement of a blustery crossing, stepping on to the tranquil world of Long Island is a magical experience. You are immediately aware that the place holds memories – and ghosts – but is still a community in the modern world thriving against the odds. 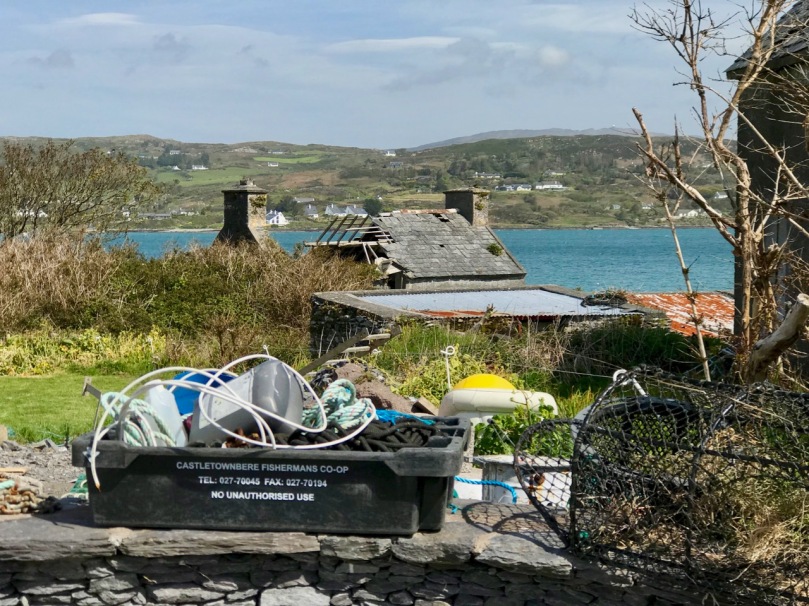 Everywhere there are signs of the past: abandonment, fading history, but also livings still being forged from the environment. The sadness is the obvious population decline. Looking through the available census records, a melancholic picture emerges: 1841 – population 305; 1911 – population 143; 1951 – population 74; 1991 – population 11; today – population 7 (and that’s an increase of 1 from 2 years ago). There was once a school: the decaying building is now a lonely waymark at the centre of the island’s single boreen.

Peter Somerville-Large in conversation with the local residents during his visit half a  century ago:

I talked to Mr McCarthy, who had lived here all his life and could remember when the place had been full of fishermen all speaking a mixture of Irish and English. One by one he had watched them leave. A dozen families still remained, comprising perhaps forty people altogether. The school had shrunk year by year, to four pupils, then two – it closed after that. There was neither electricity, nor any shop – nothing to keep the young from making the short crossing over to the mainland. It would take them fifteen minutes, according to wind and weather. There they disappeared for ever. When the old ones like himself died out the place would become empty.

Contrasts at the west end of Long Island

Although there are many houses that are intact and well looked-after (a number are holiday homes), you would think that the odds were ultimately stacked against the survival of this island. Yet those who do live here full-time have tenacity – and there is fresh energy. Helen and Maurice have built their own new house and run businesses which allow them to be island based, while Castaway East is a ‘Place of New Beginnings’, a venture offering B & B or full board and – if you want – retreat packages to recharge your batteries. Peter and Tracy are also experts in garden landscaping as can be seen from the works they have carried out for themselves. 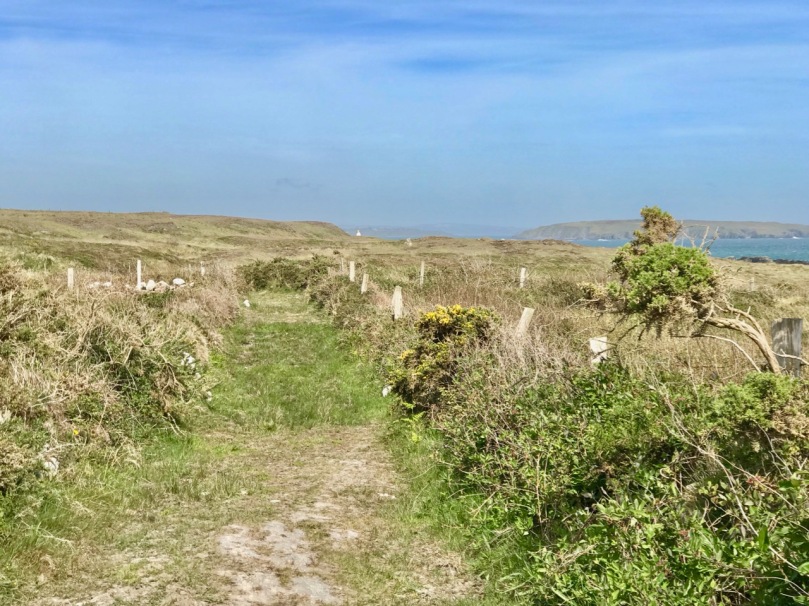 The East end of the Island: you can walk past Peter and Tracy’s ‘Island Retreat’ to the old copper mine and navigation beacon

We were pleased to find that the island’s well has been maintained and presented in excellent order – mainly by Joe, one of the Islanders. It’s a little haven, not to be missed. The day’s adventure gave us so much photogenic material – I will be returning to this magical place in a future post. 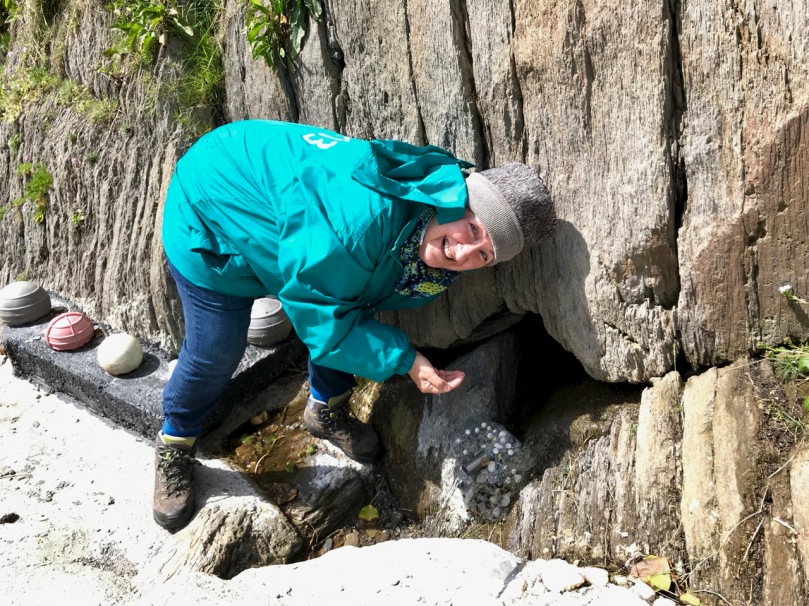 THE SUMMER sun is falling soft on Carbery’s hundred isles,

The summer sun is gleaming still through Gabriel’s rough defiles;

The little red boat that spends most of its days plying the ten minute crossing between the mainland and Sherkin island is occasionally let off its leash to go further afield and explore the Islands of Roaringwater Bay – ‘Carbery’s Hundred Isles’. We signed up for yesterday’s voyage: every day we look down over these waters from our nest up on the hill, and we welcomed the opportunity to explore our view from within it. This event was organised as part of the Taste of West Cork Food Festival, and we had the bonus of enjoying trays of good food and drink as we savoured the scenery.

The late summer sun was certainly ‘falling soft’ as Mystic Waters pulled away from Baltimore. Perhaps it was the last of the summer sun as our view from Nead an Iolair today has gone! There’s not one island to be seen through the driving rain, and the Atlantic storm is sending our weather-vane spinning…

Some of the ‘Hundred Isles’ are little more than perches for gulls and cormorants, but a few are still inhabited – Clear, Sherkin, Hare and Long Island – while ruined evidence remains to show that many more have once supported small farmsteads – The Skeams, The Carthys, Calf Islands and Castle. Horse Island is the residence of one family – with plans to establish a distillery there. 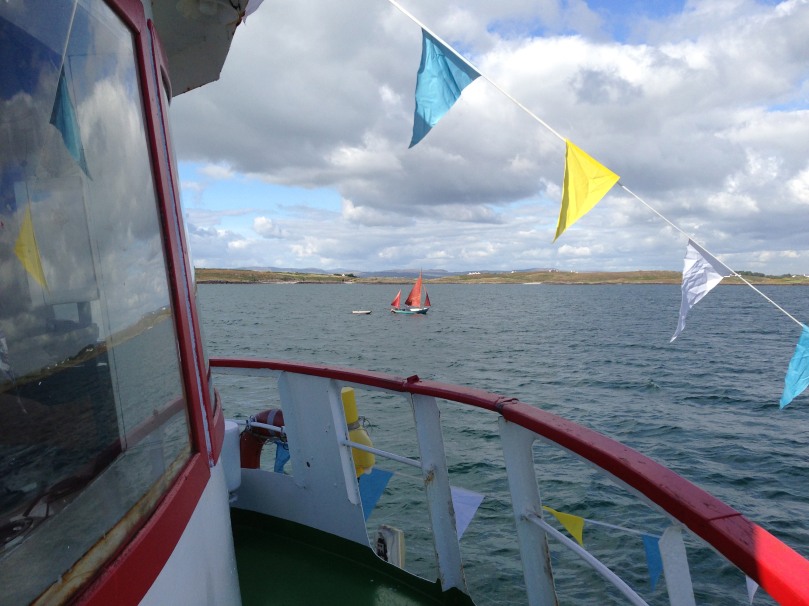 We didn’t land on any of the islands yesterday: we hope to visit some in the future. My first goal is the Middle Calf – a Hare Haven! But we do need to catch up on some Rock Art. There are marked stones on Horse Island while Clear (an Irish speaking community – part of the Gealtacht) supports a Neolithic chambered tomb which once contained a remarkable artefact: a carved stone with spirals, lines and zigzags, much more akin to the decorated boulders of the Boyne Valley Culture than the cups and rings of West Cork and Kerry. The stone (now – sadly – removed to the Cork City Museum) was part of a passage grave sited on the highest point of the island. Like the huge Newgrange monuments, the passage here is aligned on a solstice sunrise. As we look out through the mist today it’s a sobering thought that a sophisticated, scientifically aware society resided on these remote islands over 5,000 years ago.

* This poem was written by Thomas Osbourne Davis (1814 – 1845) and records the Sack of Baltimore of 1631 when Barbary pirates raided the town and took over 100 residents into slavery.