Since we started this blog, back in 2012, I have regularly written posts on the many bird varieties which we have around us on the coast of Roaringwater Bay. There are lots to add! Watch out for more entries in the future which will include some of our new arrivals. In the garden of Nead an Iolair the other day we were surprised by a male Sparrowhawk perched on the wall: the small birds all kept well away! Recently we’ve been visited by Jays, too – someone else the smaller birds shun, as it is partial to stealing eggs and young.

Today I’m going to recap on our feathered companions up here. Remember – if you see something printed in blue on these posts you can click on it and it will link you to a new page on the subject mentioned. 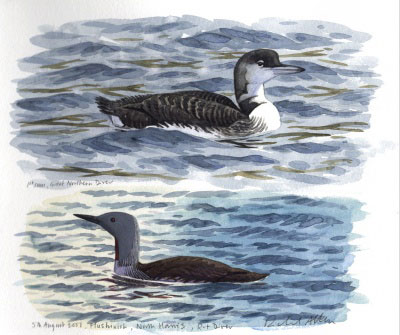 Almost a year ago I talked about the Great Northern Diver – or The Loon, as it is called in Canada. It’s only one of the many wading and shore birds which visit the unspoilt coastline in these parts. Watch out for future posts on Oystercatchers (which have already received a brief mention), Curlews, Gulls and Ducks, to name but a few. 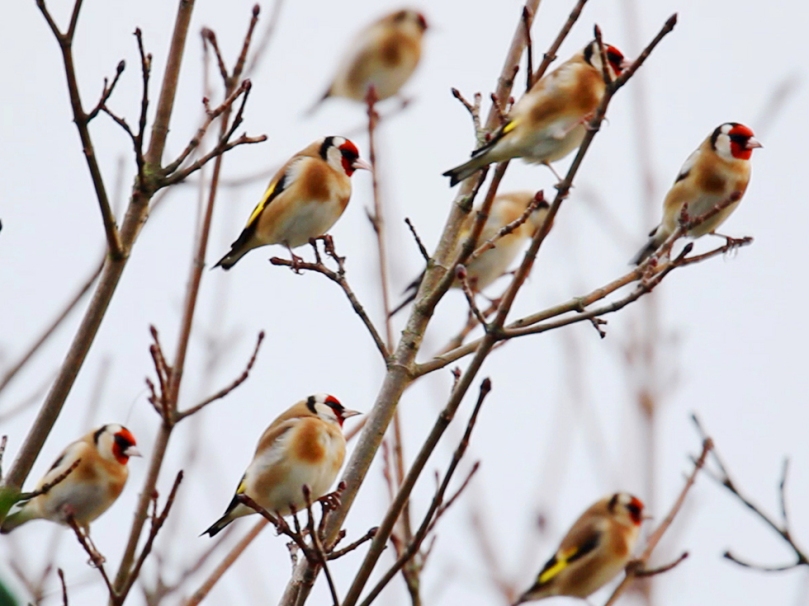 In November of last year I discussed the Charm of Goldfinches which visited the bird feeders in our garden. We saw nothing of them through the summer – in fact they were absent until this November, when a whole flock suddenly descended upon us in one day: now they are regular attenders again.

The very first bird post that I put on the blog was Aviation – and this was when we were renting Ard Glas. That was a general review of the birds that came to our luxurious new bird table which Danny made for us – now sadly demolished by Ferdia the Fox who is as fond of peanuts as the birds are…

Since then I have introduced you to Old Nog the Heron – who flies over us quite frequently, made a passing reference to the Swans who live below us in the Cove (but see more below), and set out a whole lot of fact and folklore about the wonderful Barnacle Goose. 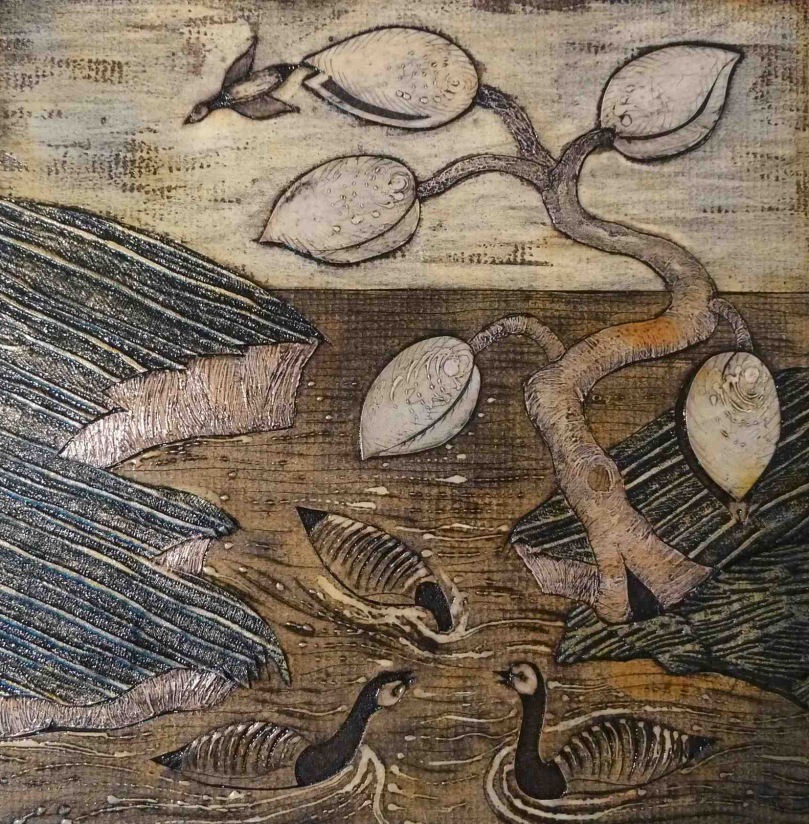 Legend of the Barnacle Goose

My favourite birds of all here are the Choughs. This is because they had died out in my home county of Cornwall (where they appeared on the coat-of-arms) when I lived there, although a programme to reintroduce them was started a few years ago and I was delighted to see a pair foraging on the coastline there just before I left. Imagine how pleased I was to discover that Choughs are resident all around Nead an Iolair! They perch on our roof, forage on our rocks and generally make themselves known to us through their distinctive cry of Cheeeeough…

Choughs over Nead an Iolair

The seasonal bird of the moment is the little Wren. On St Stephen’s Day (26 December) this – the King of all the birds – has to take cover, because he is being hunted!

Wren Boys in Cork (Maclise 1843) and drawing by Jack Yeats

Amongst many other creatures, Swans are depicted in the Honan Chapel – that gloriously effusive celebration of stained glass and mosaic art.

They are also well represented in Irish folklore – most prominently in the saga of The Children of Lir. Here the enchanted children are destined to live out one of their fates – 300 years in the cold, inhospitable Sea of Moyle: