November – a time for Fire Festivals

Hallowe’en is big in Ireland. It has always been celebrated and is, of course, an opportunity for children in wonderful spooky disguises to go out collecting sweets and treats. But this – the ‘Day of the Dead’, and traditionally the beginning of the winter – has generated far more elaborate customs than any I have encountered before. Have a look at this parade which takes place in Shandon, Co Cork. 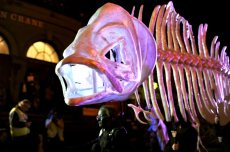 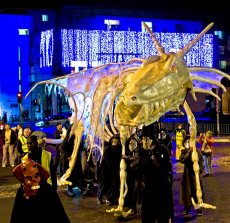 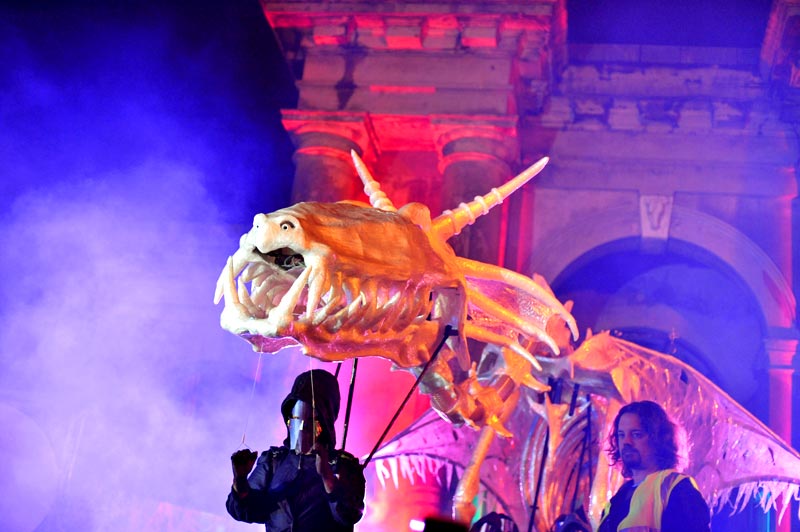 The origins of Samhain (Oiche Shamhna in Irish) seem to be an old Irish festival marking the first day of winter and the ending of the farming year. All crops had to be in and safely stored – hay, potatoes, turnips, apples – and cattle and sheep were moved from mountain and moorland pastures and brought closer to the farmstead; milking cows were brought inside for the winter and feeding with stored fodder began. Turf and wood for the winter fires must have been gathered and dried. If fires were lit year-round – for cooking – they had to be allowed to go out for the one night and were then lighted again in the morning: this custom still survives in some Irish households. 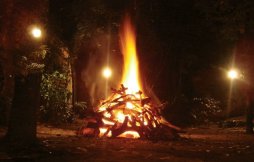 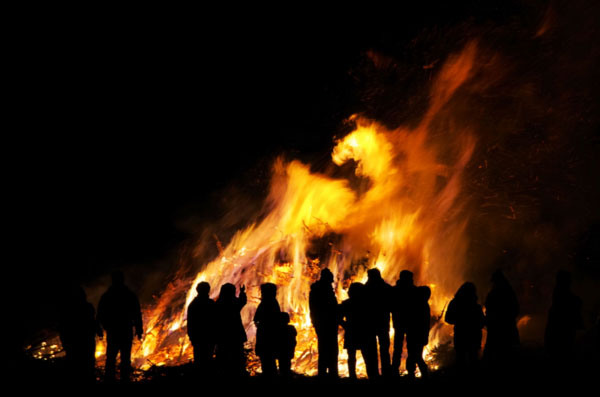 Fire is an essential element in the festival. The word ‘bonfire’ is supposed to be derived from ‘bone fire’ – the burning of the bones of the animals slaughtered before the onset of winter once the meat had been prepared and preserved to keep the larder full through the cold bleak months to come. It’s no coincidence that in England bonfires are lit in early November to ‘remember’ Guy Fawkes and his plot to blow up the House of Lords in 1605: this was just a continuation of fire festivals that already happened then – and are still happening now. When I lived in Devon I came across (and took part in) traditions of pulling burning barrels through the streets (Hatherleigh) or carrying burning barrels through crowds of spectators (Ottery St Mary). West Country carnivals were common at this time of the year, and many were accompanied by flaming torches and fireworks. It has always seemed necessary to ‘lighten’ and warm the darkening year with fire.

November, from Northside of the Mizen by Patrick McCarthy and Richard Hawkes 1999:

‘…The Month opened with Snap-Apple Night and tales of púcas and little folk. From the rising of the moon on November Dark the mackerel would make their way to deeper water; it was the end of the seine season. With the crops all in and hill grazing finished, fires were set on the hills and preparations made for the winter. There was little employment for the months ahead…’ 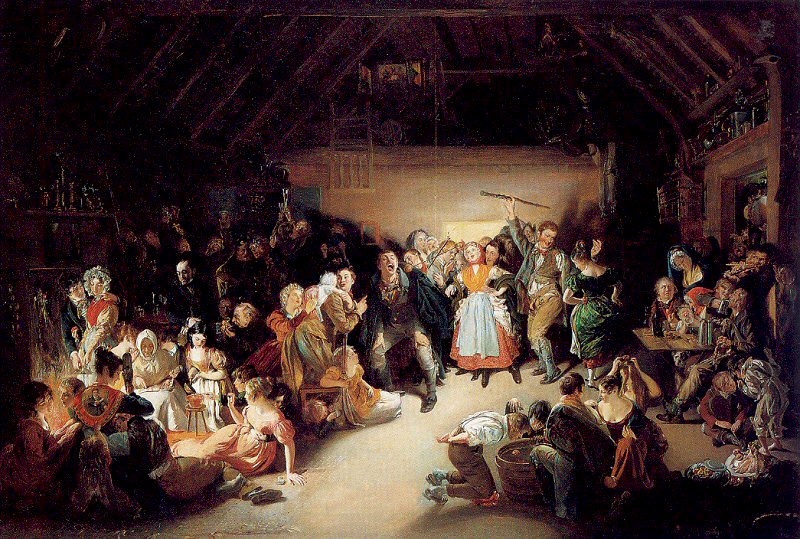 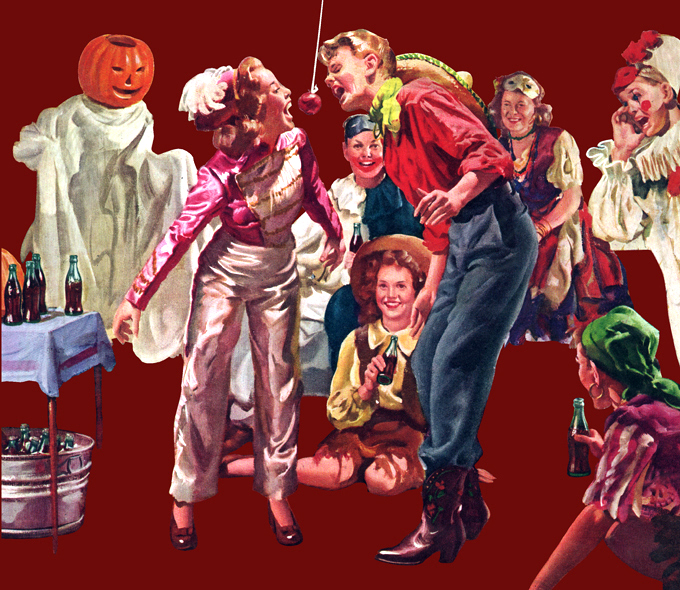 ‘…The first game of the night was always ‘Snap-apple’ when an apple was hung from a beam in the kitchen and all the children took turns to ‘snap’ the apple. Sometimes the apples were put in a half barrel of water and you had to take one out with just your teeth, with your hands behind your back…’ 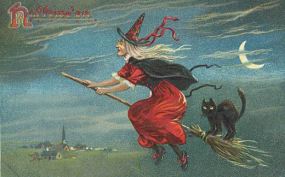 Two Hallowe’en tales from Northside of the Mizen:

…One fine Halloween, Neddy Hodnett (Gurthdove) was crossing the land on the way back from scoriachting (visiting friends and neighbours), when he came across a Narry the Bog (a heron) at Hodnett’s Sleabh. He caught it and put it under his coat. Neddy knew that Dan Thade Coughlan was out scoriachting and he also knew what route across the fields Dan would take, so he hid in a beillic. It wasn’t long before Dan came from the east, and as he passed the beillic, Neddy knocked a screech out of the Narry. Dan leapt out of his skin with fright and with a roar he leapt over the ditch and away out of sight. Dan didn’t take long to arrive home and he told everyone he had met the devil himself, coming agin him! Dan did not leave the house, day or night, for a week… 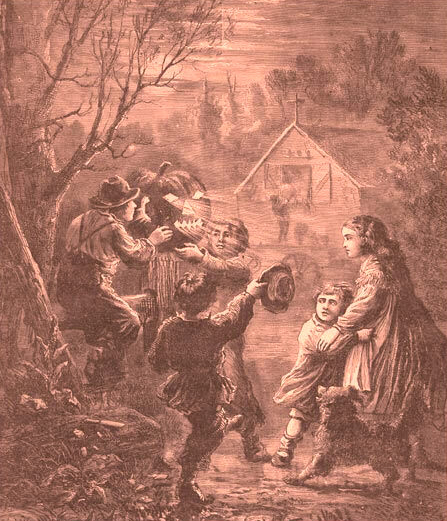 The Púca of Knocnaphuca was half horse and half human. One late Snap-apple night there was a young lad out walking the road when he heard a strange, sweet music coming from the hill. He went up and saw the Púca playing on a whistle. As soon as the lad had put eyes on it, it stopped playing and caught him. Away the Púca went to the top of the hill, where a crack opened up in the rock. In they went. They went twisting and turning down through tunnels until the entered a chamber full of gold. “Now,” said the Púca, “you are mine!”…

The next morning the boy was found on the road by the Long Bog. His hair had turned white and he could not speak a word ever after…

I like Finola’s tradition for Samhain: making (and tasting) a Hallowe’en barm brack… Delicious!