This was a feast for the eyes – a few thousand years younger than Rock Art and far less enigmatic! Our travels took us to County Meath where we explored the monastic city of Kells (where the famed book was written and illustrated), Kells Augustinian Priory – a different Kells but in County Kilkenny (and which Finola has written about in her post) – and Jerpoint Abbey – a Cistercian monastery rife with carved figures – some up to 900 years old.

Firstly, the Book of Kells is worth more than a passing mention, especially as some commentators have likened the medieval carvings at Jerpoint and other contemporary monastic foundations in Ireland to ‘illuminated manuscripts cast in stone’ – because of the richness of the characters, the decoration and the detail. The Book of Kells probably dates from the 8th or 9th centuries and may either have been written in its entirety in Kells, or started by St Columba’s community in Iona and completed in the Scriptorium in Kells. That building still exists! In fact it (or something very like it) is illustrated in the book. It’s known as St Colmcille’s House – we went to have a look at it, and were fortunate to have a tour by its guardian. 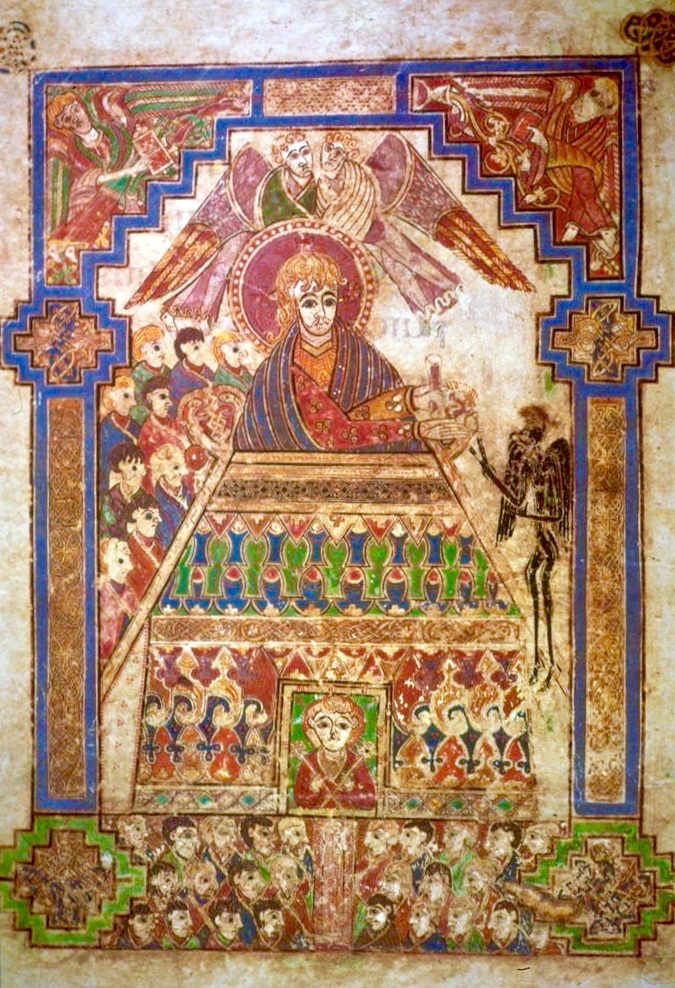 A page from the Book of Kells which may be an illustration of the Scriptorium at Kells – and, perhaps, a self-portrait of the writer: see him sitting in the doorway to the house working away with his quill pens… 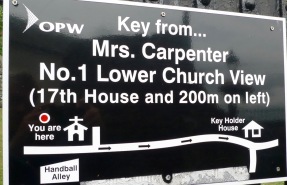 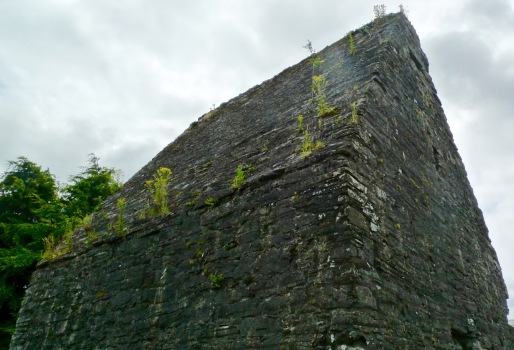 St Colmcille’s House – in its 21st century context (top left), the keeper of the key (bottom), and the ancient stone roofed oratory (main picture) which is supposedly where the Book of Kells was written – or, perhaps, completed. The upper floor of the building has a small window oriented to focus sunlight on the writing table. St Colmcille’s bed was also kept here – a large and heavy stone slab – until it was stolen in the 1950s! A few hundred years earlier (in 1007)  the Book itself was stolen from Kells and eventually found in a nearby bog. It stayed in Kells until 1654, when it was sent to Dublin for safekeeping: it is now on permanent display in Trinity College.

So – back to the feast, and this was centred on Jerpoint (Kilkenny), which has spectacular examples of medieval carving, including at the tomb of Felix O’Dulany, Bishop of Ossory between 1178 and 1202. Adornments on later tombs include ‘Weepers’ – those who might be in mourning for the departed souls. These figures were carved by members of the O’Tunney family – sculptors from Callan who worked in the 15th and 16th centuries. Some of them can be readily identified: St Peter, for example (another keeper of the key), while the trio below are St Catherine – with her wheel, Michael the Archangel and St Margaret of Antioch – who is conquering a Dragon.

The Weepers at the top of this post show how they were martyred: St Thomas with a lance, St Simon with a saw, St Bartholomew holds a skin (he was flayed to death) and St Paul with a sword.

Another trio of Weepers: none of the guidebooks identify these, but I’m sure that among our readership there is an expert hagiographer who can help out… 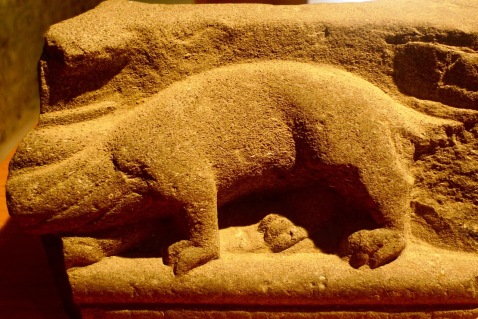 It’s not easy to do justice to all the carvings at Jerpoint: I could fill many more pages. There are also cross slabs, roof bosses, decorative friezes and capitals… 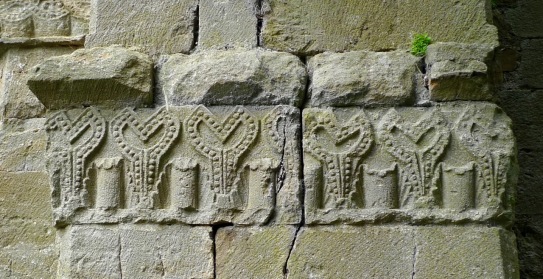 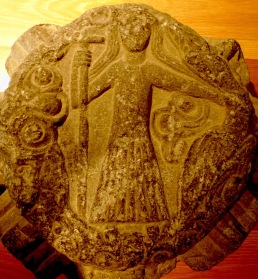 I can’t leave Jerpoint without recounting one story which I was delighted to discover. You may remember my excitement when I found out that the real St Valentine is interred in the Carmelite Church in Dublin. Here at Jerpoint, Co Kilkenny, is another marvel: the bones of St Nicholas are reputed to be buried here… Yes – the Santa Claus St Nicholas! Tradition has it that a band of Irish Norman knights from Kilkenny went to the Holy Land to take part in the Crusades. As they headed home to Ireland, they ‘seized’ St Nicholas’ remains, bringing them back to Jerpoint, where the bones were buried – some say – under the floor of the Abbey (others say they repose nearby at the old church of St Nicholas).

Cross-slabs commemorating knights at Jerpoint: did they bring back Saint Nicholas from the Holy Land?

(from The Bones of Santa Claus by Bill Watkins)

Well, we may or may not have seen – or walked over – the tomb of St Nicholas, but we saw his Reindeer during our medieval feast tour. Or perhaps they were somebody else’s Reindeer… They are carved on to the base of the Market Cross in Kells (Meath), the town which boasts so much history and which has no less than five high crosses and a round tower. 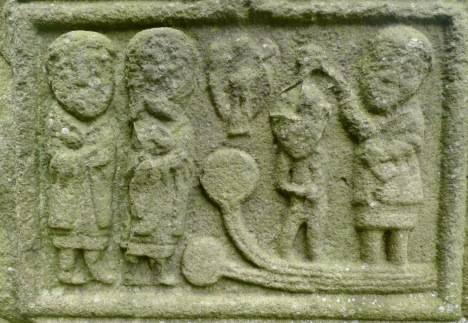 Medieval illustrations on the high crosses at Kells, including some enigmatic Reindeer

Finola and I between us have treated you to a horn of plenty this week with our tours of medieval hotspots in Ireland. We know it’s not West Cork! However, these posts demonstrate, again, how easy it is to find history (and legend) wherever you go in this special land. In fact, it’s very difficult to travel far here without tripping over the past. It’s always fairly low-key. Most sites are protected as scheduled monuments; some are in the good care of the Office of Public Works and have guides and visitor centres. Many are remote, open to the wind, rain and sunshine and free for us all to visit: very often you will have the history all to yourself.