The man standing on the platform in the picture is Holger Lönze. You might remember him from Umha Aois, a post I put up last year about a group of artists and ‘experimental archaeologists’ who use Bronze Age metal working techniques to produce replicas of ancient tools, weapons and musical instruments. Holger – a sculptor – is a key member of that group: his workshop is in Schull and he has just completed a commission to make an enormous bell. You can see the project in progress on the right of the picture. On the left is Donagh Carey, another West Cork artist who worked on the casting. 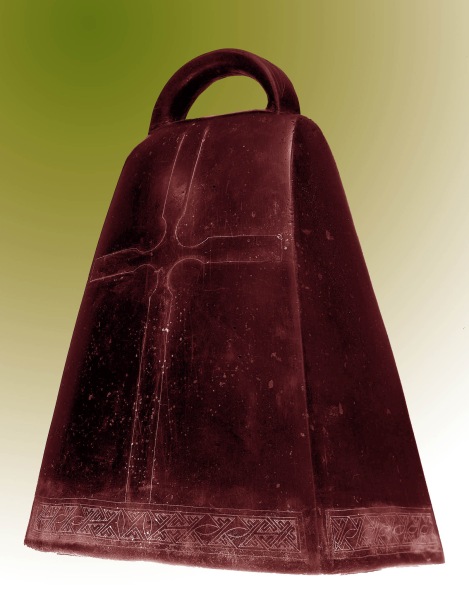 Left: the original Bangor Bell – the inspiration for the new work – and, right: an early sketch design by Holger of the proposed bell sculpture

The story begins in the sixth century when Columbanus (the Latinised form of Columbán, meaning White Dove) was born in the Kingdom of Meath, now part of Leinster, Ireland, in 543. That’s about 50 years after the death (aged 120) of St Patrick. Patrick, of course, is the best known of the missionaries building up Christianity in Ireland, but he wasn’t Irish himself, having been born a Roman Briton. Columbanus was Irish, and he saw his mission as spreading Christianity from Ireland throughout the Continent of Europe. His mission was successful and St Columbanus is recognised in Europe as a founder of many monastic settlements during his travels in Gaul, Burgundy, the Alps and finally Italy where he established the great monastery at Bobbio, beside the River Trebbia. Columbanus died at Bobbio in 615 and his remains are buried in the crypt there.

There are great stories told about the life of Columbanus. When he walked in the woods, birds would land on his shoulders to be caressed, and squirrels ran down from the trees and nestled in the folds of his cowl. He is also said to have tamed a bear and trained it to pull the plough. Wolves would not harm him. He is usually depicted with a book and an Irish satchel, sometimes with sunbeams over his head. I’m not sure why but Columbanus is known as the patron saint of motorcyclists.

Saint Columbanus – left: depicted on a medieval fresco with book and sunbeams (note he is carrying a bell) and, right: sailing off to Europe with his companions

Getting back to West Cork and the bell: Columbanus travelled to Bangor, County Down – in the far north east of the island of Ireland – where he studied in the  Abbey until he was 40. A beautifully decorated bronze handbell was found near the Abbey by gravediggers in the 18th century; it is assumed to have been buried to keep it safe from Viking invaders in the 9th century. The Abbey is seen as the starting point for Columbanus’s missionary work in Europe and the bell (now in the North Down Museum) is associated with him, although unlikely to have been contemporary with his time there. Holger Lönze has always been fascinated by medieval bronze bells and has made replicas of many surviving examples. He cast a copy of the Bangor Abbey handbell using Medieval metalworking techniques in 2012, and the process is recorded in this video. 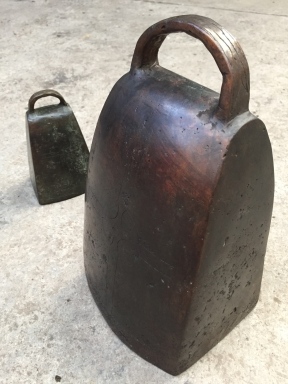 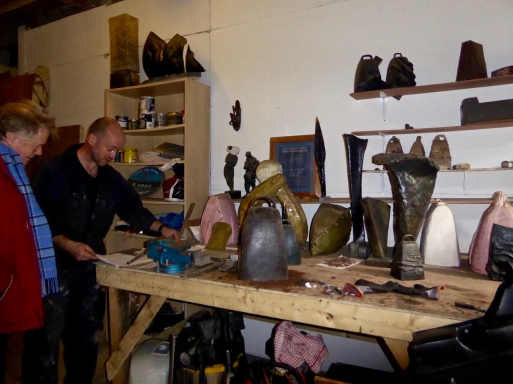 The new sculpture – titled Fluctus Angelorum (Wave of Angels) was commissioned by Ards and North Down Borough Council for Bangor Abbey  as one of a series of works inspired by the extraordinary achievements of Columbanus and his companions. Based on the proportions of the original bell, the surface of the sculpture is shaped like the surface of the ocean. The sea-blue patina and breaking waves are a metaphor for Columbanus’ remarkable sea voyage. The 4m high bell was fabricated in bronze plate in West Cork using the ancient repoussé process – by alternating annealing and hammering and finally welding. It took no less than 400,000 hammer blows to transform flat sheets of bronze into this piece of sculpture!

In the workshop: the surface of the 4m high bell reflects the surface of the ocean and (right) the inside of the great bell: it is mounted on a stone plinth and lit at night. Both bells and waves are striking metaphors to mark the Saint’s 1400 miles journey from Bangor to Bobbio – 1400 years ago

The medieval Bangor Bell didn’t have a clapper: it was carried around and hit with a hammer. Taking me back to my days as a percussionist, Holger allowed me to hit the giant bell… It made a mighty sound! From West Cork the bell travelled the whole length of Ireland, passing its 8th Century sister bells in Cashel, Co Meath and Bangor. It is now installed in the Abbey grounds and was formally unveiled on 13th June. The sculpture is not yet complete – Holger is making a number of smaller ‘satellite’ bells which will be set around it, but even on its own it is a most impressive sight: the largest bell ever made in Ireland. 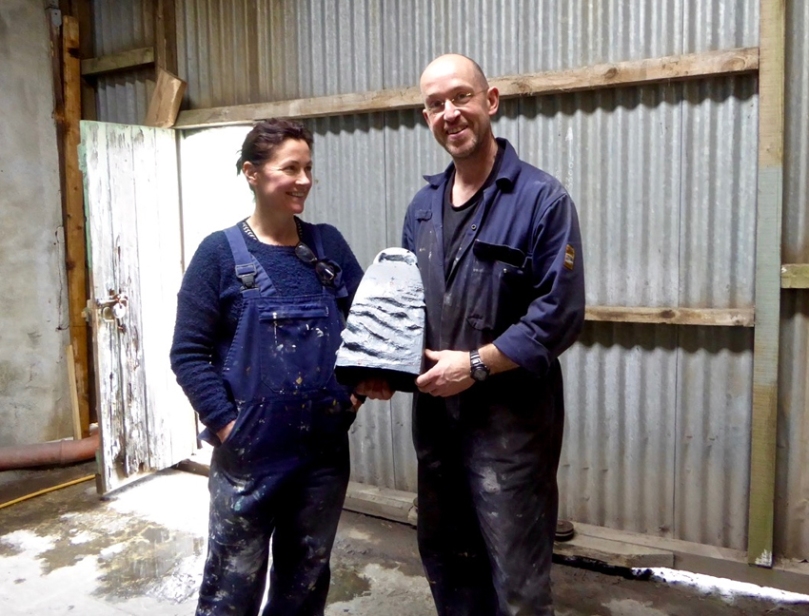 Artist Karen Hendy and Holger Lönze showing the maquette for the bell project in Schull and, below, the bell in its setting at Bangor Abbey

I’m often repeating the message but there is no doubt that West Cork is the most creative place I have ever lived! All manner of culture flourishes here and we are privileged to live in a community where we can readily meet and appreciate the work of so many artists; and we have excellent galleries to showcase this work – The Blue House Gallery in Schull (next door to Holger’s workshop), Uillinn in Skibbereen, Catherine Hammond‘s excellent gallery, now also in Skibbereen and The Aisling Gallery in Ballydehob. We are spoiled! 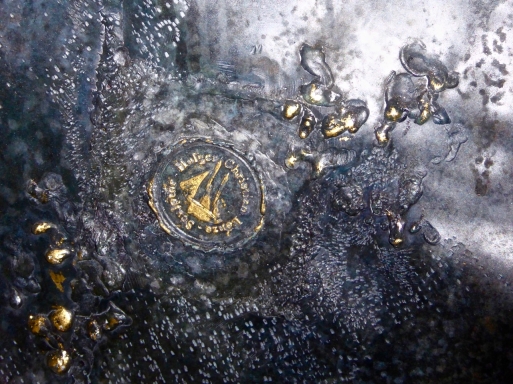