You will often find us visiting the inhabited islands of Roaringwater Bay. They are, after all, in full view of the panorama we see from our perch up here in Nead an Iolair (Eagle’s Nest), and easily accessible by regular ferry services. We like them because – who doesn’t enjoy a boat trip? Also, that little step from the mainland removes you to another world: places where life is lived a little differently, where you can feel slightly remote from the the most pressing issues of life, a little bit ‘on the edge’. Cape Clear, Sherkin, Long island – we have written about them all. And, today’s subject, Hare, or Heir: we have been there before but last week Finola was leading a wildflower walk on the island, and I went along for the ride, and a further exploration. 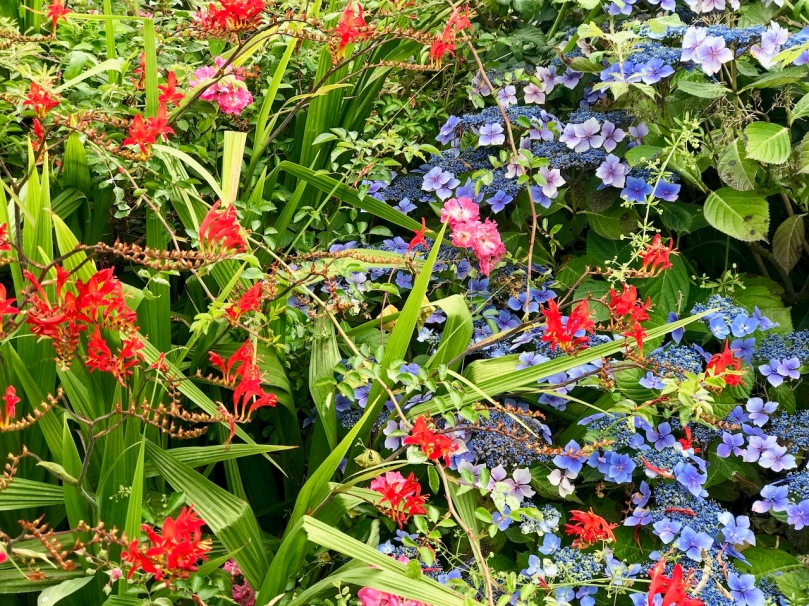 Colour on Heir: upper – Heir hedgerow, where wildflowers and garden escapees mix happily together; lower – Finola’s band of wildflower enthusiasts get caught up on the minutiae of the beach flora

It was a mixed, breezy day on the island, but dry for the group – two ferry loads and some furry four-footed minders to keep us all in order. Much time was spent poring over a myriad of plant species, some of which flourish on the West Cork islands more prolifically than on the mainland. I was interested in the land- and sea-scapes which changed quite dramatically with the movements of the tides.

Tides in and out: these two pictures near the wester end of Heir Island were taken within four minutes of each other!

A word about the island’s name: often seen on maps and signposts as ‘Hare Island’ (which of course makes my own long ears prick up!) it is supposed to have nothing to do with the animal. Today, the islanders will tell you that it derives from the past ownership of the lands by the O’Driscoll clan, and should be called Inis Uí Drisceoil (O’Driscoll Island) or Inis an Oidhre (Island of the inheritance – ie, of the O’Driscolls – or heir), hence the more usual modern name. 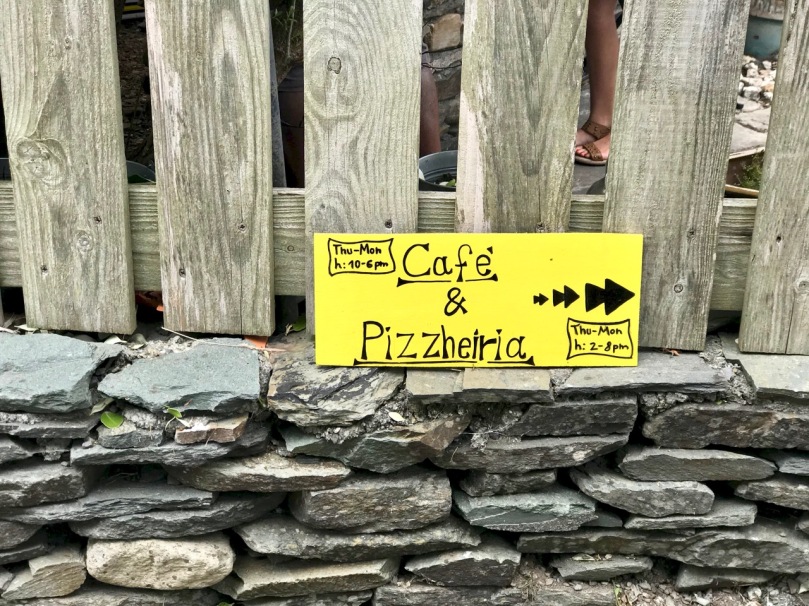 Yes, you can get pizzas and coffee on the island in the summer!

So is this island really a ‘Paradise’, as Finola called it in her earliest post? Undoubtedly! Away from the busy harbour it’s profoundly peaceful: bees, butterflies and wild birds are abundant. But it’s also haunted – as are the other islands of Roaringwater Bay. The past is always around you: reminders of a time when the population was far greater. The first official Irish census of 1841 showed a population of 358. The famine years caused fluctuations but in 1901 there were still 317 people living permanently on the island. Today this number has reduced to around 30 full-time residents, although there are many holiday homes on the island, and the summer population in present times can approach 150. This helps to support a cafe (above) and a restaurant (Island Cottage).

Island history: upper – Field of the Graveyard commemorates the burial of unbaptised children; lower – the Island School closed in 1976, when the resident population was around 50

Artist Christine Thery has been a full-time resident on the island for many years; her husband Gubby Williams helps with the ferry and has designed and built ‘Heir Island Sloops’. Christine is an active environmentalist and keenly involved in ensuring that Heir is sustainable and responsible in caring for its natural habitats; she was instrumental in organising Finola’s Wildflower Walk. Here is some of her work in her studio: 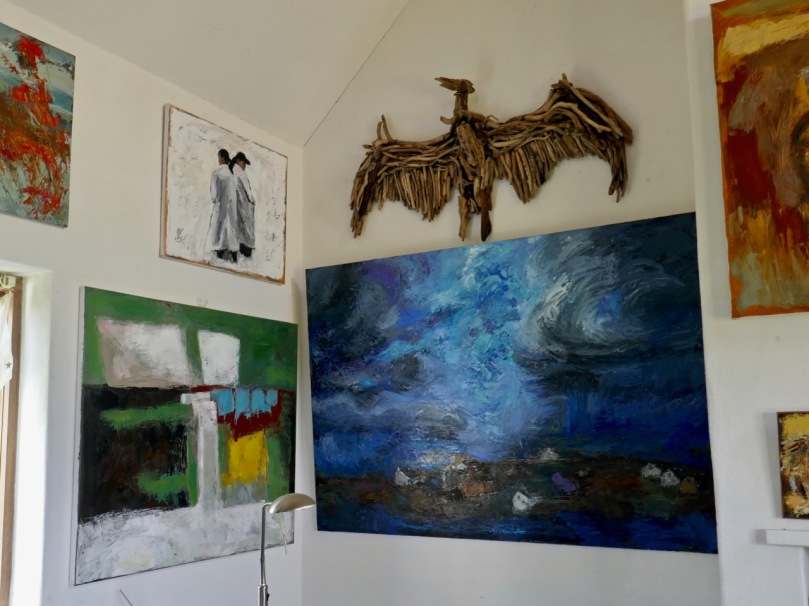 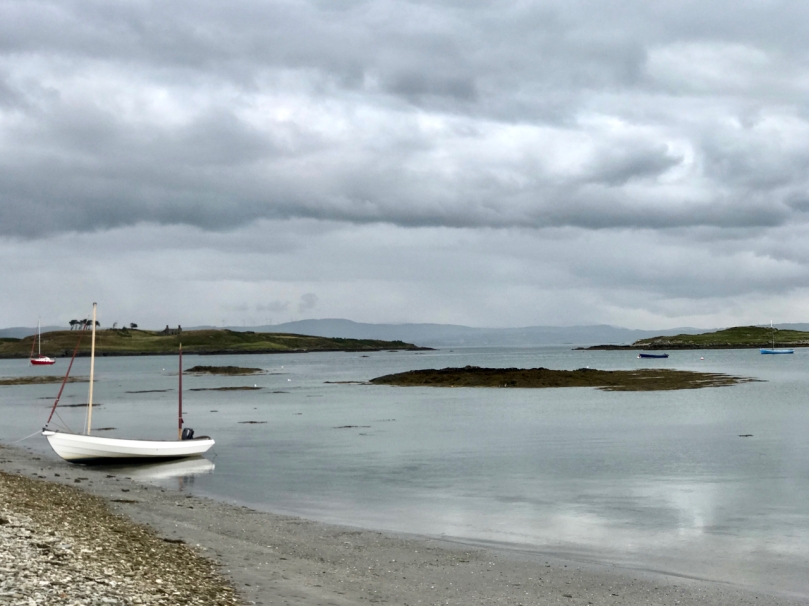 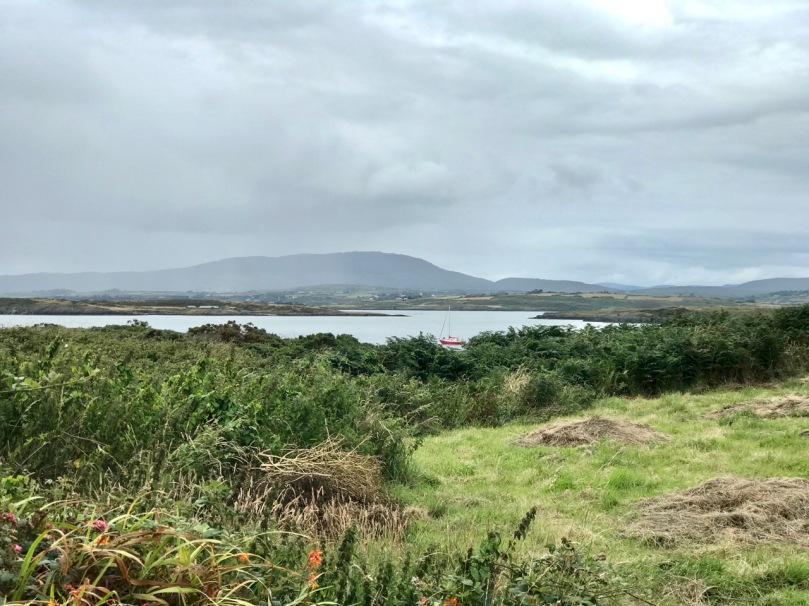 Heir is only a five minute ferry ride from Cunnamore Pier, yet the mainland seems a distant place once you are imbued with the innate atmosphere of island existence. The views from the north side of the island are dominated by Mount Gabriel, (pictures above). Five minutes – yet it seems such a step away from everyday life: long may beautiful Heir continue to support its fragile but tenacious resident population.