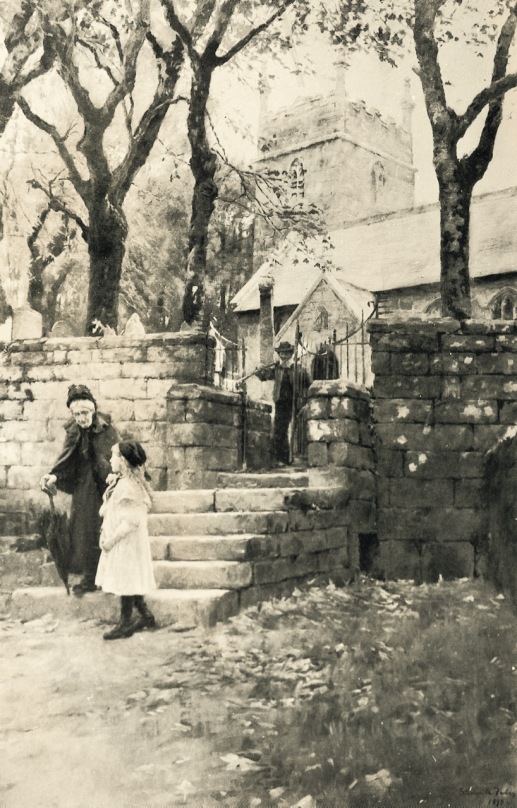 This is the last in the series of West meets West posts, which have been running alongside the exhibition of Cornish artists at the West Cork Arts Centre’s gallery in Skibbereen – Uillinn.

The painting (above left) by Cornish artist Alex Smirnoff (courtesy of Bryony Harris) wonderfully illustrates the story of Saint Credan who, like Saint Piran before him, travelled from Ireland to convert the heathens in Cornwall to Christianity in the 7th century. Our Saint Credan is looking a little melancholy. That’s because he accidentally killed his own father and therefore spent the rest of his life as a swineherd in penance. As a compensation it has to be said that he raises very fine pigs! Behind him is the ancient parish Church of Sancreed, very accurately portrayed with its huge colony of rooks in the trees behind. In the same picture is one of the five ancient crosses in the churchyard. The church itself dates from the 14th century: the crosses may be much older than that.

Above right is from a fine study of the entrance to Sancreed churchyard – by the Irish-born ‘Father’ of the Newlyn School, Stanhope Alexander Forbes. It is titled ‘October’ and was painted in 1898. Sancreed was the church attended by many of the Newlyn School artists, and the churchyard contains the graves of some of them, including Forbes and his wife Elizabeth Armstrong. In the church is a memorial designed by Forbes to commemorate their only son, Alec, who was killed in the Battle of the Somme in 1916. Close by is a holy well, described by Amanda.

The crowning glories of this church, however, are the unusual carvings on the rood screen inside, which date from the 16th century. Last week I showed you the carving of the Chough – a bird closely linked with Cornwall and Ireland. Today I am illustrating some more of these carvings, and these show very strange beasts indeed! Some of them can be recognised as heraldic; no doubt they all would have carried symbolism when they were placed here five hundred years ago. 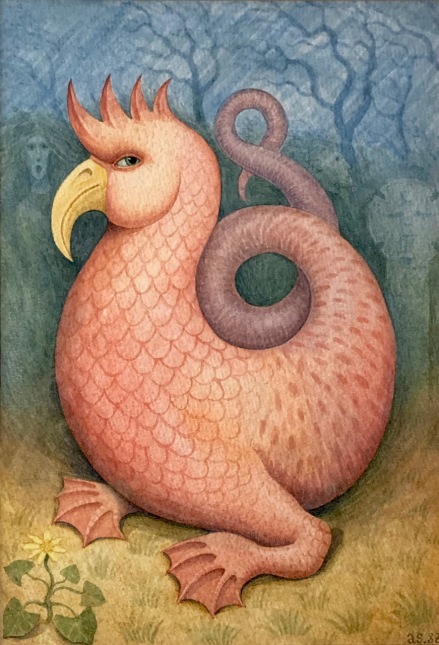 A basilisk is hatched by a cockerel from the egg of a toad. Be careful, because it has a lethal glare and poisonous breath. The basilisk carved in Sancreed church (above left) looks fairly personable, while Alex Smirnoff’s version of it (above right – inspired by the Sancreed carving) should be given a wide berth. Look at the shadowy figures – and the ancient cross – hiding in the background of Alex’s painting: typical of his work. 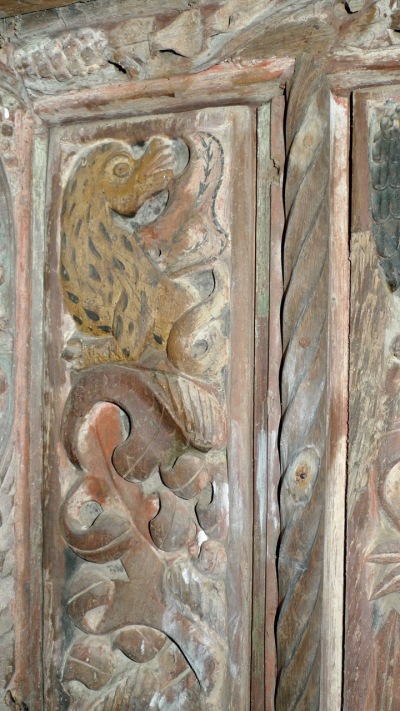 It’s not just strange creatures that are depicted at Sancreed (and there are many more of them) – there are figures as well:

Above are two panels with ‘Janus’ figures, male and female and – on the right – is a most curious character who seems to be a musician playing, perhaps, a serpent or a cornett. But he seems to be part bird, or wearing a feathered cloak. Below is a three-headed figure and a representation of an angel, perhaps: could this actually be Saint Credan hiding in his own church? 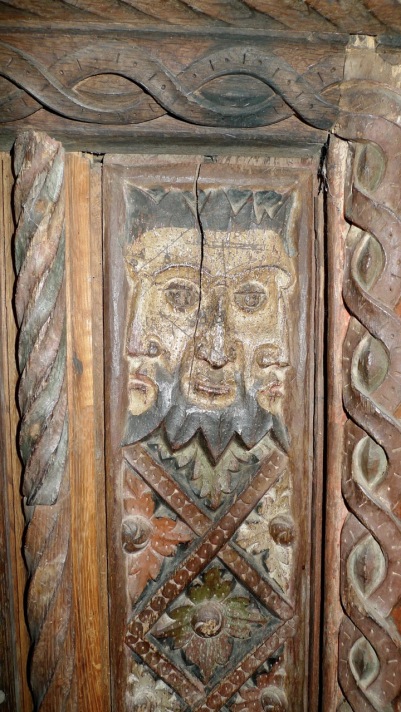 All this might seem a far cry from the exhibition in Skibbereen, which features three contemporary artists from Cornwall… But it certainly is art from Cornwall – and in a church which was founded by an Irish Saint; and a church, moreover, which had a special meaning for many of the Newlyn School artists, including Irish-born Stanhope Forbes, founding ‘Father’ of that school.

This series consist of twelve posts (including this one). You can link to them individually through this list:

A Saint’s Day – Ciarán and Piran

Artists of the Western Coasts

Forbes – An Irish Artists in Cornwall

Choughs – and their travels

There’s still time to visit Skibbereen to see the exhibition of the Cornish artists’ work: West meets West is on until July 8 at Uillinn. Enjoy it!