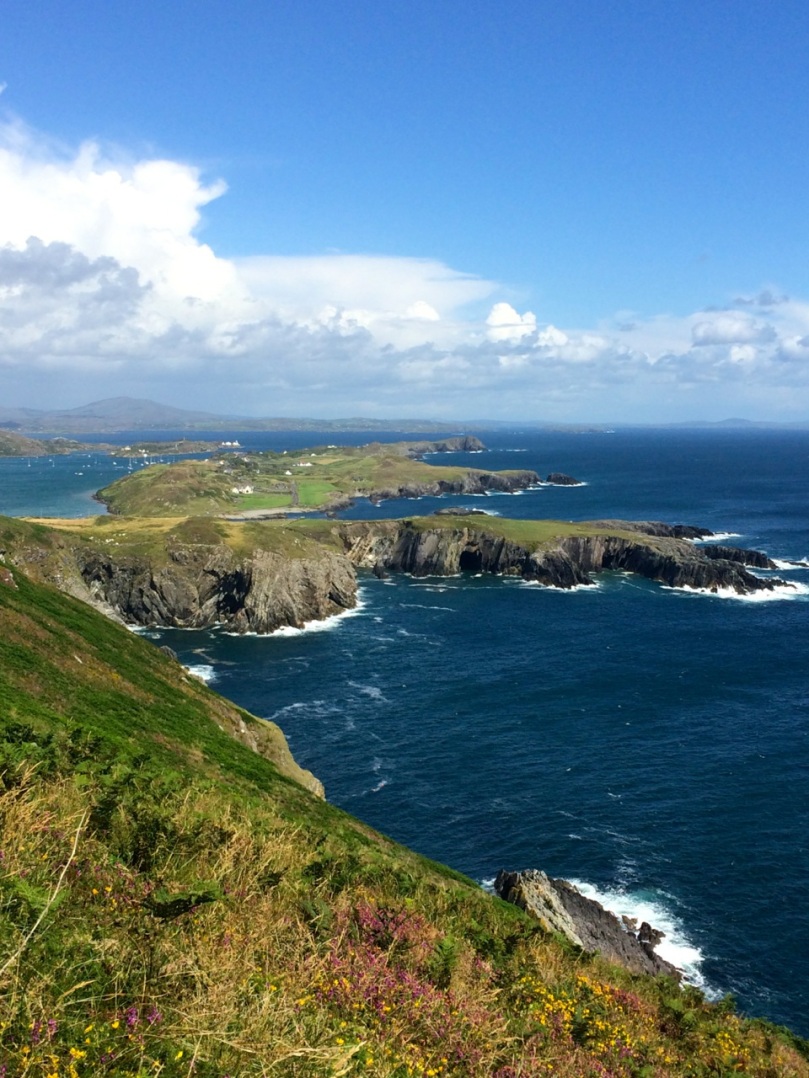 On Brow Head, looking back up the Mizen Peninsula

Contrary to popular belief, Mizen Head is not the most southerly point on the Irish mainland – that distinction actually belongs to Brow Head, just to the east. Brow Head doesn’t have the same profile as Mizen Head: many people have never heard of it. But it’s magnificent, steeped in history, wonderfully scenic and best of all, totally walkable.

You arrive at Brow Head by driving west from Schull out towards Crookhaven. If the water is low in the Haven you may spy the remains of ancient field boundaries, covered at high tide.

The starting point is Galley Cove – a smaller and quieter beach than the popular Barley Cove a little further west, but featuring the same white sand and inviting Caribbean-blue water. You can leave the car here and proceed on foot uphill if you’re feeling in the need of an aerobic workout. Or you can drive up the narrow road, but be warned: if you meet a car coming down you may have to reverse a considerable distance. There is parking for three or four cars at the top of the hill.

The first thing you’ll notice, in front of the lone house at the top of the hill, is an impressive row of standing stones, aligned to point back down the Mizen Peninsula. These are recent additions to the landscape, testament to the enduring tradition of erecting such stones in this part of the world. 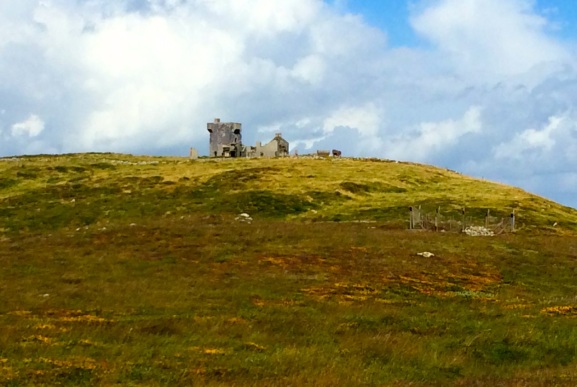 All around the blooming heather 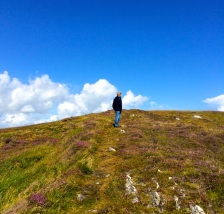 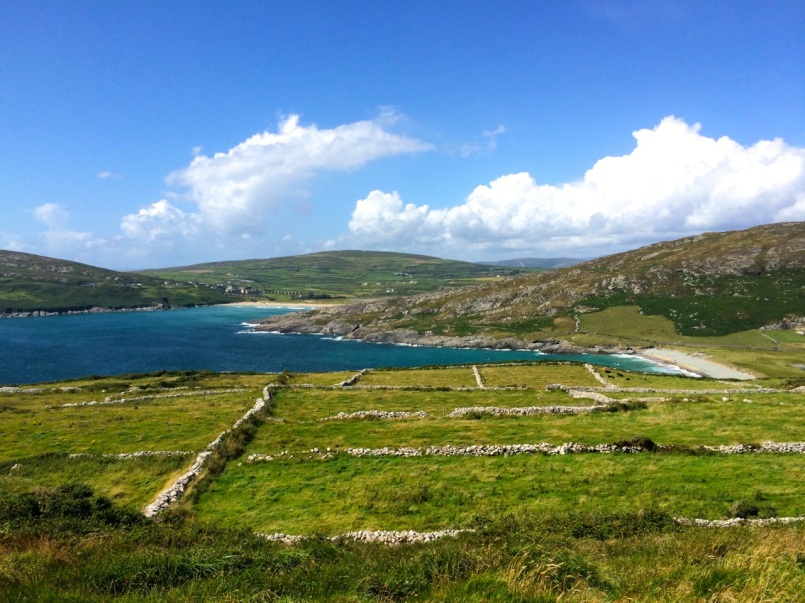 Scramble up through the heather to the remains of the Napoleonic-era signal tower and the Marconi Telegraph Station – see Robert’s post for more about Marconi and early wireless telegraph in West Cork. From here there are panoramic views east to Crookhaven and down the Mizen Peninsula, west to Mizen Head, North to Barley Cove and southeast to the Fastnet Rock. 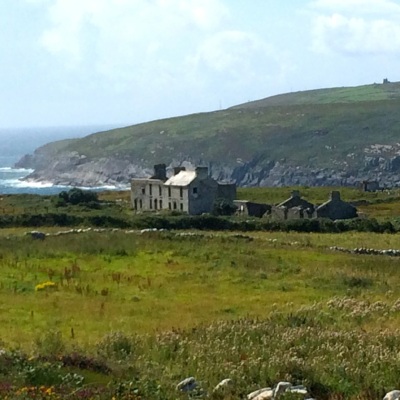 Follow the path now south west to the tip of the Head. This was a copper mining area in the nineteenth Century and you can still see the ruins of the Mine Captain’s house, miners’ dwellings and fenced off mine shafts. Abandoned cottages litter the north-facing slopes, with small overgrown fields defined by stone walls. 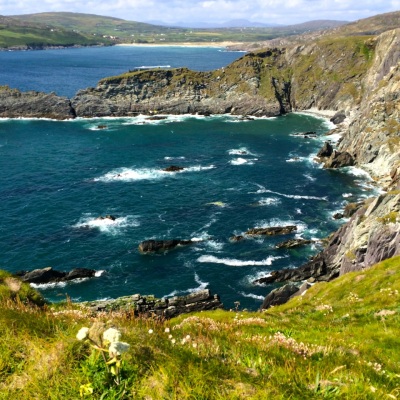 Near the tip of the Head you must cross a narrow causeway with steep cliffs on either side. This part is not for the faint of heart (or small children, perhaps) especially on a windy day. Find a sheltered spot at the end and sit a while. You may see gannets diving here, or dolphins in the waters below, and you will certainly be aware of the power of the pounding waves. 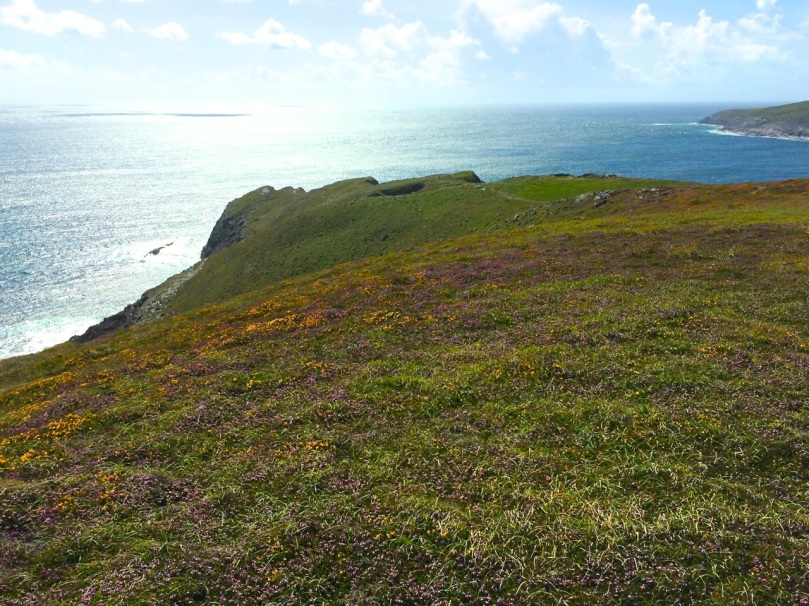 Before you leave, make sure that you make a wish – after all, this is a special place, and special places in Ireland have their own magic.

Robert has written about our field trip to Cape Clear Island and I can now reveal that the journey also included a thrilling sail around An Charraig Aonair (Karrig Ane-er, The Lone Rock) better known as the Fastnet Rock; or to thousands of emigrants for whom it was the last sight of their home country, Ireland’s Teardrop.

The Fastnet from Cape Clear

We had been looking forward with great anticipation to visiting the rock close up. We can see it from our home, a craggy point on the horizon –  a far away mystical tor abounding with lore and legend. We have been awestruck by the waves crashing over the lighthouse in winter storms and wondered at the lives of the lightkeepers who once manned that treacherous outpost. We watched through our telescope as enormous yachts rounded the rock in the biennial Fastnet Race last summer, following the progress of the race on a special iPhone app. I have written elsewhere about the awful tragedy of the 1979 race, in which Gerard Butler and his fellow lightkeepers on the Fastnet played a crucial role in monitoring the participating yachts in the mountainous sea conditions.

The original Cape Clear Lighthouse beside the signal tower

The Fastnet was built to avoid such tragedies. Its first iteration was in 1818 as a lighthouse tower on a high point on nearby Cape Clear Island, beside the Napoleonic-era signal tower. However, the light was frequently obscured by fog and after the wreck of the Stephen Whitney in 1847 with 92 souls lost, it became clear that the best place for a lighthouse was on the Fastnet Rock. 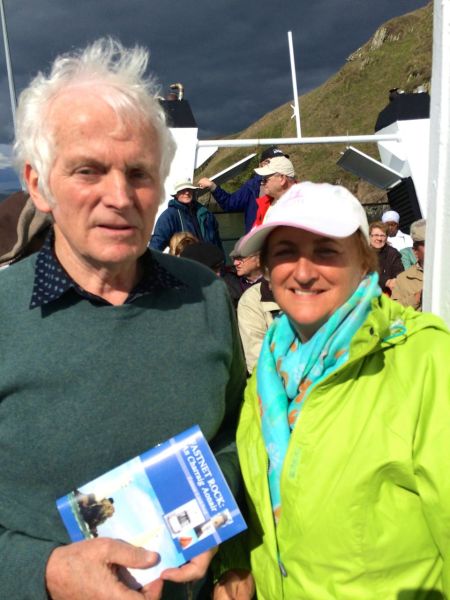 The great era of lighthouse building in Ireland got underway in the mid-nineteenth century. The engineering, design and construction expertise necessary to build lighthouses are impressive enough. Add to this the logistics of building on a tiny and inhospitable rock in a heaving sea on the edge of the Atlantic, and the sheer accomplishment of the objective is  staggering. The first attempt, started in 1849, was of steel and needed constant repair. It was decided to replace it with a structure of Cornish granite and the current lighthouse first cast its beam over the waters in 1904. Eamon Lankford in his book Fastnet Rock: An Charraig Aonair describes the building process and provides old photographs illustrating how the granite blocks were ‘floated’ and hoisted on to the islet, having been first assembled and tested in Cornwall. According to the Irish Lights website, Fastnet is the tallest and widest rock lighthouse tower in Ireland and Great Britain and was a monumental achievement when completed in 1904. Each of the granite stones of the tower is dovetailed into those around it, bonding the structure into a virtual monolith. This webpage also has several excellent photographs of the lighthouse from the air. What photographs reveal is what is not said by irish Lights – the lighthouse is also a thing of beauty. Tall, slender and elegant and boasting two balconies, it personifies form and function in the most admirable fashion possible.

Today the Fastnet is fully automated but in The Lightkeeper Gerard Butler describes what it was like to live on the rock in fair weather, when he fished and swam from the steps, and foul, when the seas crashed and roared over the lighthouse as it quivered and shook all night. 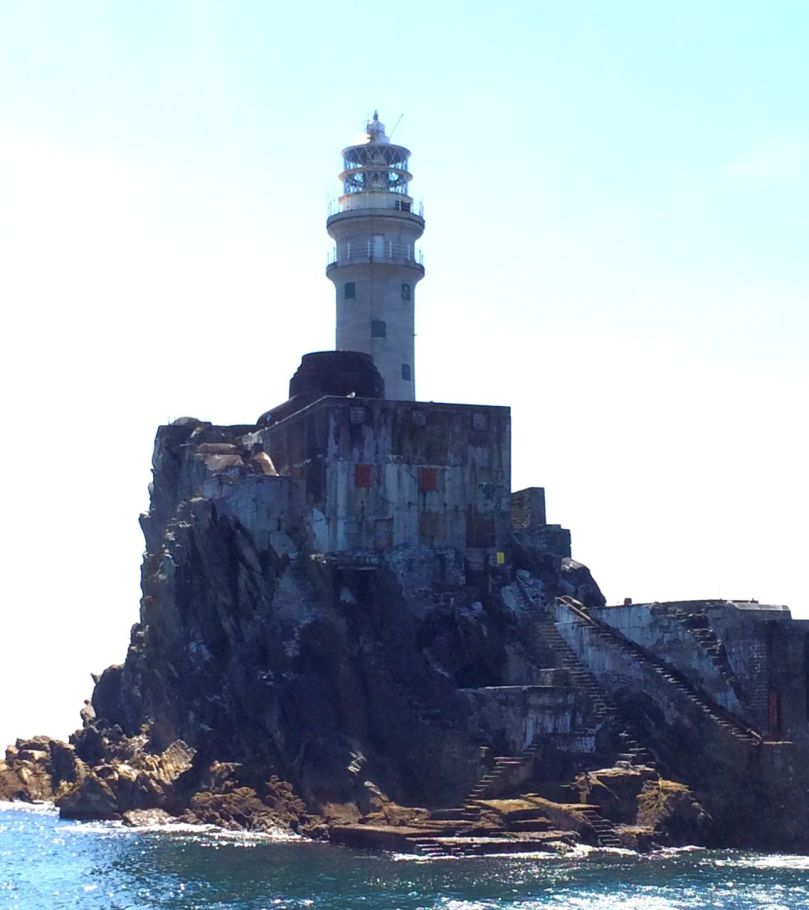 Fastnet, showing the steps and stores

One of the stories we heard from Eamon concerned  a daring midnight raid on the lighthouse carried out by an IRA ‘Flying Column’ (experts in guerilla warfare) in 1921 during the Irish War of Independence. They were after the explosives used on the Fastnet to power the foghorn. In researching this story further, I found an article in the 1999 Mizen Journal (no longer in print) by Frank Lannin, based on the eyewitness statement of Sean O’Driscoll.* Here is part of Lannin’s account:

The breeze had freshened and caused the usual swell around the Rock and there was a rise and fall of several feet. The anchor was let out and the boat moved slowly to the landing place. Positioned on the bow was John O’Regan, a rope tied around his waist, a revolver in his pocket and balancing himself with the rise and fall of the boat. He would have to select the right moment to jump on the Rock and catch the iron ring which was fixed to the Rock. He knew where the ring was fixed, but to grasp it in total darkness was a feat that few would attempt. His vast experience as a seaman was now to be put to the test. As a wave was rising he jumped. It was a tense moment. As the wave covered him he grasped the ring with both hands. (It was an occasion for handclapping, but not tonight.) In seconds he had made the boat fast and the rest of the raiding party were landing on the platform. The huge steel door of the lighthouse was not locked. John was first up the spiral stairway leading to the room where the Lightkeeper was on duty. He put up no resistance and as a precaution the wireless was dismantled. Seventeen boxes of gun cotton and three boxes of detonators and primers were loaded on to the “Maire Cait” by means of the lighthouse derrick. in all, the spoils weighed but one ton. The daring mission was accomplished.

The fog signal, together with the light, was an important aid to navigation for ocean going vessels. It was only in 2011 that the Fastnet foghorn was permanently discontinued, as modern navigation equipment rendered it unnecessary. All around the world people are missing the haunting sound of foghorns now, a sound so many of us grew up with. But at least we can see the light from Carraig Aonair every night and count its ‘character’ – one two three four five FLASH…one two three four five FLASH – and know that it’s doing its part to keep our mariners safe on the seas that roll outside Roaringwater Bay. 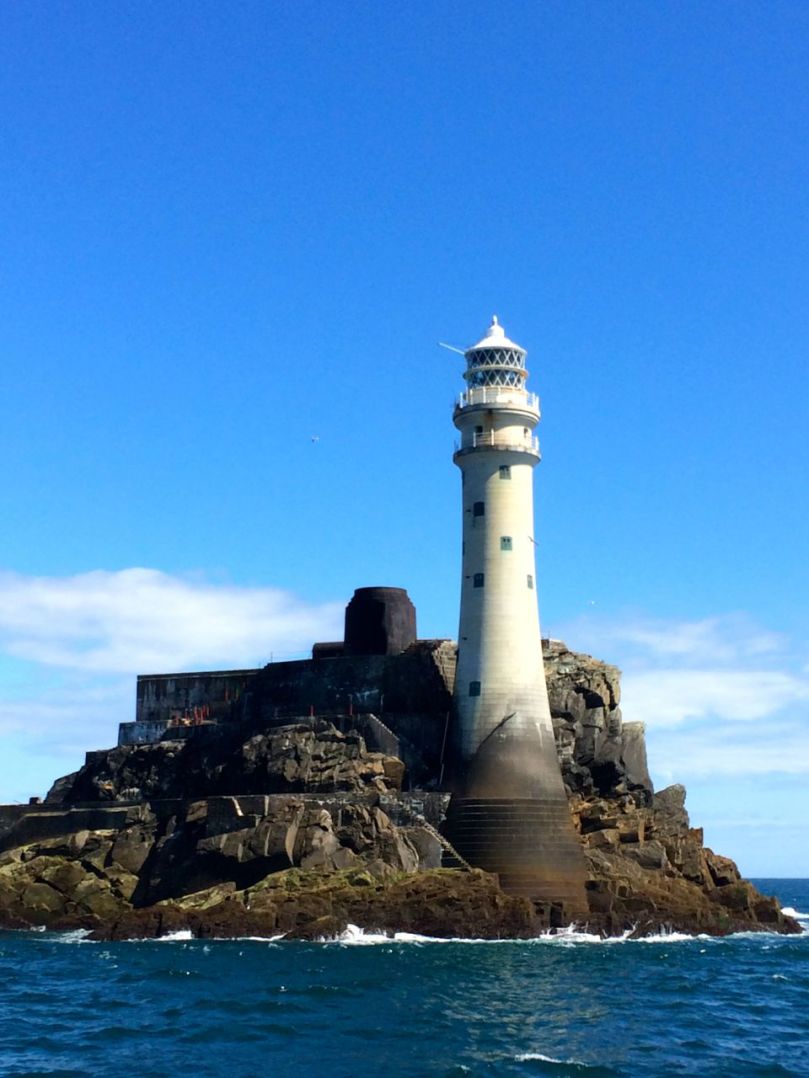 The full extent of the column of Cornish granite and the stub of the original steel tower.

*See pages 18 to 20 of Sean O’Driscoll’s statement for his dramatic story of the raid.