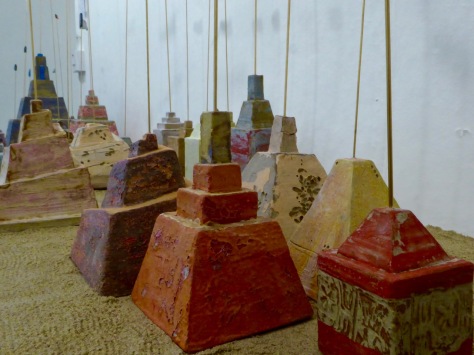 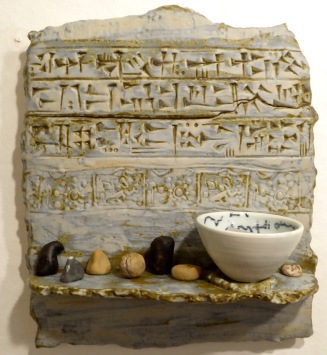 Just about a year ago I reviewed a most stimulating exhibition which was running in Skibbereen: West Cork Creates. It featured collaborations between local craftspeople, visual artists, photographers and designers – combining their skills and expertise to produce exciting, original work. In my review I asked if there was a difference between an artist and a craftsperson, and this sparked off a lengthy online debate. My favourite sentence from this exchange was penned by Colin Murray, an artist printmaker who had taken part in the Skibbereen exhibition:

All the work in the Skibbereen exhibition was outstanding, but I was drawn more than anything else to the collaboration of artist and writer Brian Lalor and ceramicist Jim Turner. They have continued to collaborate, and the current exhibition at the Blue House Gallery, Schull is an extraordinary display of their combined talents.

The exhibition has the title The Fertile Crescent, a phrase that might seem strange, at first, encountered on the small main street of a village in the far west of rural Ireland. It conjures up, of course, the images we had in our school text books of the beginnings of human society, including the development of writing, the invention of the wheel, the use of glass – and irrigation which enabled settled agriculture to develop. This led gradually to the exploration of metalworking – some of the earliest figurative bronze work is from the area: 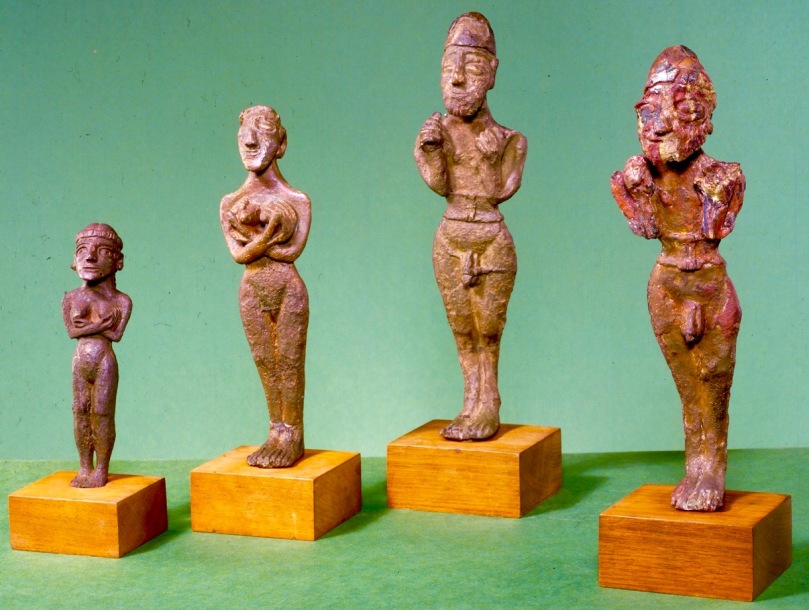 Not in the Schull exhibition – but original bronze figurines from Tell Judaidah, Turkey. These are the oldest examples of true bronze (combination of copper and tin) known. They are dated to around 3000 BC (photo – University of Chicago)

At school we learnt about this land and its features and I remember the romance of the names that were conjured up: Mesopotamia, Assyria, Egypt, Tigris, Euphrates… geographically far away but important enough to be titled The Cradle of Civilisation. That’s where our ancestors came from, we were told: that’s where our religions began.

Minaret of the Great Mosque of Samarra, an etching by Brian Lalor

That geography today is at the forefront of our news. We now think of Iraq, Syria, Lebanon, Jordan, Israel and Palestine as well as the older names. We now think of idealogical war zones, we think of suffering, of displaced people; we think of bombs, human carnage, ruined ancient sites – and refugees. The mission statement for the exhibition begins:

…In this exhibition Jim Turner and Brian Lalor have devoted their attention to the current tragedy unfolding in the Middle East where the ruins of the civilisations of the past are being destroyed, and the present-day populations forced to flee their homes in fear of their lives, to become refugees in adjoining countries and in Europe. Our world heritage is under threat of total destruction as the cycles of violence recorded by history continue to occur…

It’s this modern view of what is going on in The Fertile Crescent that occupies this exhibition, and for that alone this work is as important on the main street of Schull as it would be in any major world capital. 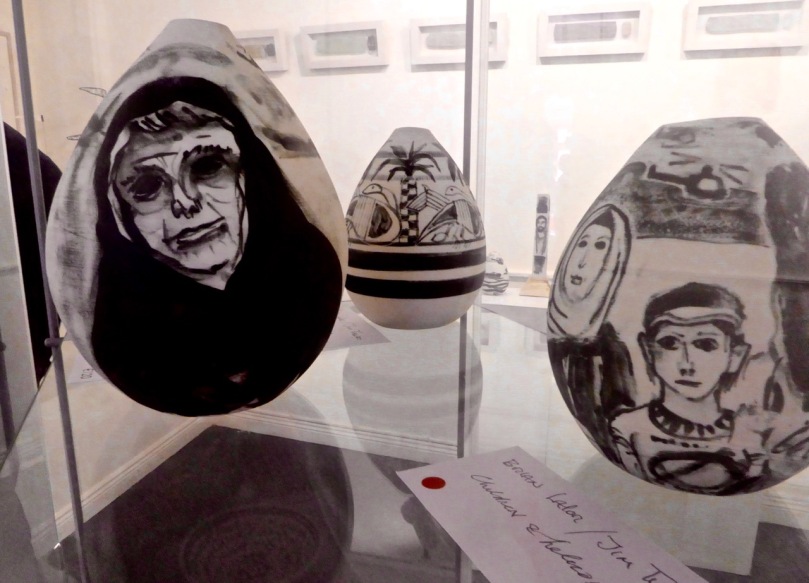 The ceramics – pots and bowls: the decorations on these utilitarian objects portray urgent messages for our society today. Jim Turner is the potter and Brian Lalor provides the illustrations

In the exhibition there are references everywhere to the cultural history of the Fertile Crescent. Jim Turner has made a series of cylinder seals, which involve inscribing a clay roller which is used to impress calligraphy on to a clay tablet; the same techniques have been used to decorate ceramic plaques. 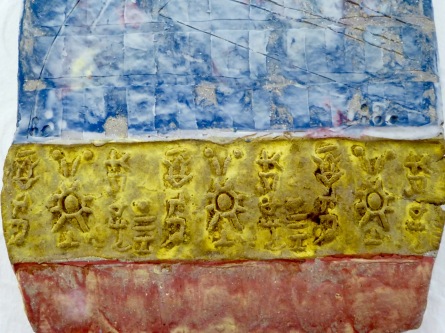 (Top) one of many ‘cylinder seals’ by Jim Turner on display in the gallery; (above) two of the ceramic plaques with impressed patterns

Obelisks and ziggurats are architectural features which we associate with the history of the Middle East. The two artists have produced a huge array of artefacts using these distinctive forms. Some stand in serried rows like an army (top picture), while other are decorated by Brian with motifs ancient and contemporary. The juxtaposition perhaps sometimes perplexes the viewer but the overall effect within the galleries is arresting and we are left in no doubt that these artists are giving us – Europeans – clear and deep messages, not only about our endangered world heritage, but our own responsibilities towards the chaos that is engulfing The Fertile Crescent in our own time. 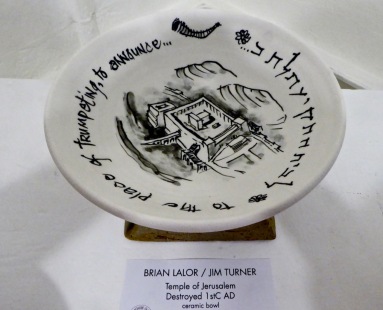 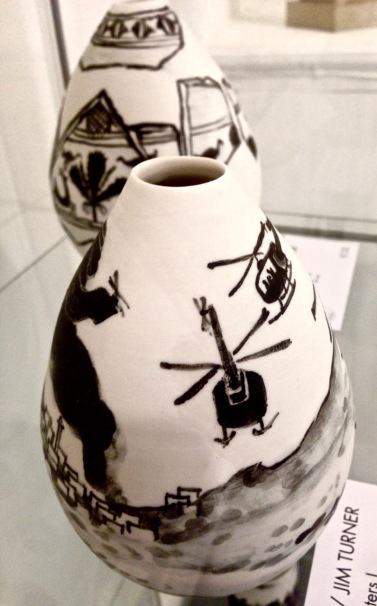 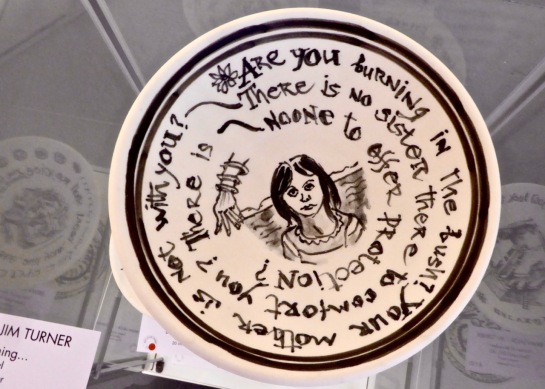 Try to catch this exhibition: it deserves a wide audience. Perhaps West Cork is a long way for some of you to come? I hope there will be chances for this work to be seen elsewhere. I know the artists are collaborating on a further venture later on this summer: doubtless that may well reach the pages of this Journal. Congratulations to The Blue House Gallery for providing us with this most thought-provoking and dynamic work. 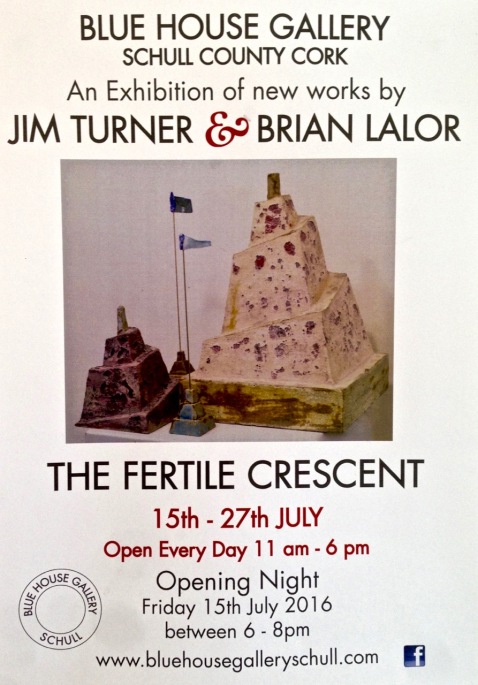