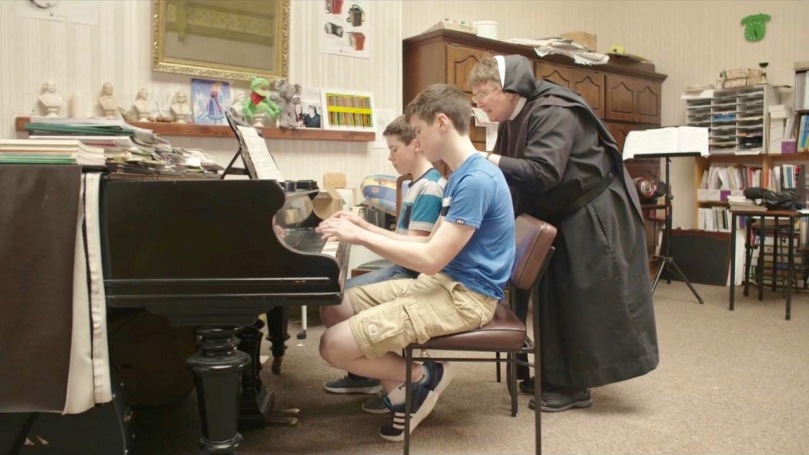 How do you run a film festival in a town with no cinema? You use technology! The festival’s motto is Our Village is Our Screen, and it’s totally apt. For the duration of the Festival, you can drop into any venue (pub, cafe, village hall, mobile cinema), order up a coffee or a pint, and enjoy one of the many free short film programs on offer. This distributed intranet is all organised locally (kudos to Digital Forge!).

It’s all run now from the new Film Centre: the old Schull bank building is being converted, thanks to generous endowments from William and Judith Bollinger and others. It will be a tremendous asset for the town and there are Big Plans for the building in the future.

Pauline Cotter – the Chair, and beating heart of the Festival

The marvellous Blue House Gallery organised a show with the theme of “Tribal” that included a series of films along with the art works. 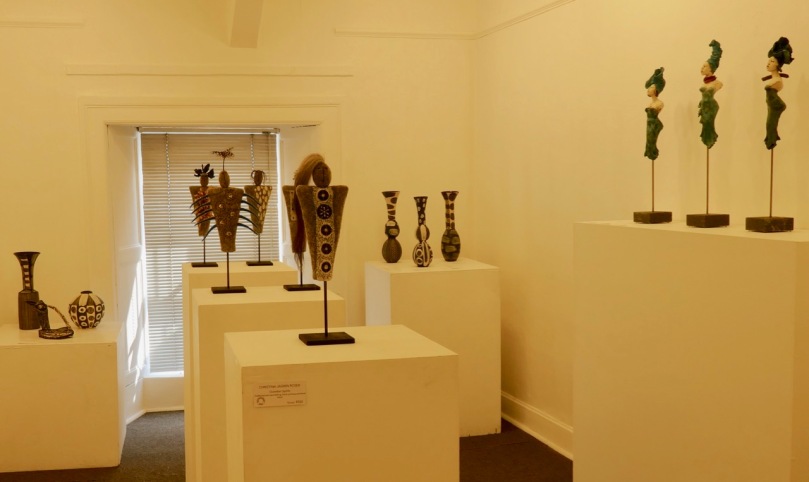 One of the gallery rooms in the Tribal Exhibition: felt idols by Christina Jasmin Roser, ceramics by Etain Hickey and Jim Turner, and sculptures by Eyelet Lalor

Each short film lasts anything from two to eighteen minutes. We are so used to long movies that it comes as a revelation that a complete story can be told in such a format. If you’re not sure that this is actually possible, watch Happy Birthday Timmy. We watched in in the world’s tiniest cinema – only room for three. 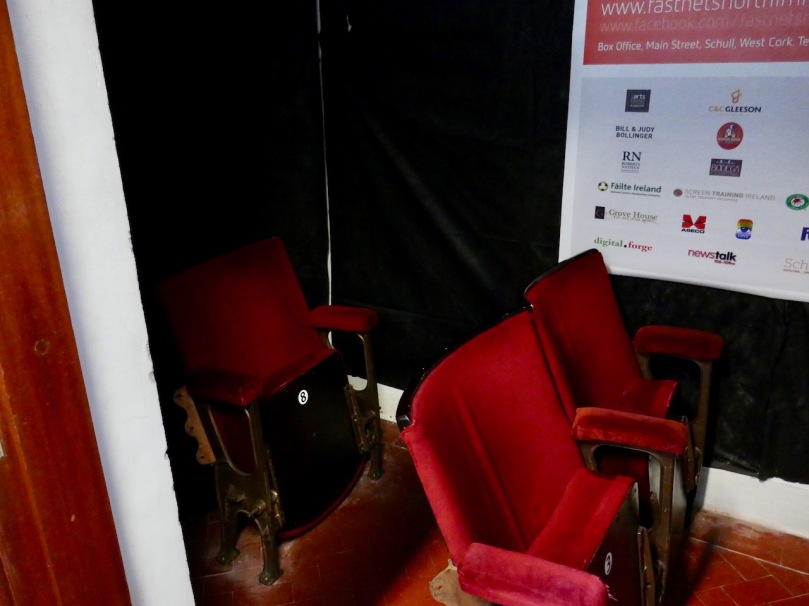 One of the shorts that really hit a chord with us was from Cartoon Saloon, Late Afternoon – here’s the trailer, but it doesn’t really give a complete sense of the colour palette that made this such a special experience. It’s from the celebrated Cartoon Saloon studio and it’s already won awards. We also howled through The Fountain, a fabulous conceit built around the re-disovery of DuChamp’s iconic work of art. The Festival Image this year was from a powerful short called Little Shit, with a moving performance by the young actor, Badger Skelton.

DuChamp’s Fountain, said to have ushered in a new era in modern art

Besides the short films from all over the world, there are feature length movies, along with question and answer sessions with producers, directors, actors, casting specialists, composers, set designers… Aspiring film makers can take a stunt workshop, or have their script critiqued by a laser-sharp expert, or learn how to make a movie using only an iPhone. We had the young star of Song of Granite (an Oscar contender) who gave us an example of his sean nós (old style) singing. Here’s the trailer of that film, which we saw in general release earlier this year and which made a powerful impact on us.

We attended a screening of The War of the Buttons, with the producer, Lord David Puttnam (beloved local), the Casting Director and several of the (not so young any more) actors. It was a joyful occasion. Not only is it a classic and thoroughly enjoyable movie, but it was shot around West Cork, and apparently was one of those movies where everyone felt like family afterwards.

The best movie we saw all weekend, hands down, was the Irish documentary Making the Grade, which believe it or not was all about piano lessons. The header photo for this post is from that movie. The Director, Ken Wardrop, was there to receive our standing ovation and to tell us a little about his technique. Here’s an Irish Times Review that perfectly sums up how we all felt about it.

More difficult to watch was Black 47, a film of the Great Hunger, shot as a kind of Western, with a Connaught Ranger returning from the British Army’s Afghanistan Campaign to find his family dead and the land devastated. It raised complex issues for us and lead to some pretty intense discussions afterwards. Interestingly, it seems to have divided the critics down the middle, earning a 50/50 rating on Rotten Tomatoes. But the Irish Times had a thoughtful review of it that also contains a link to the trailer. 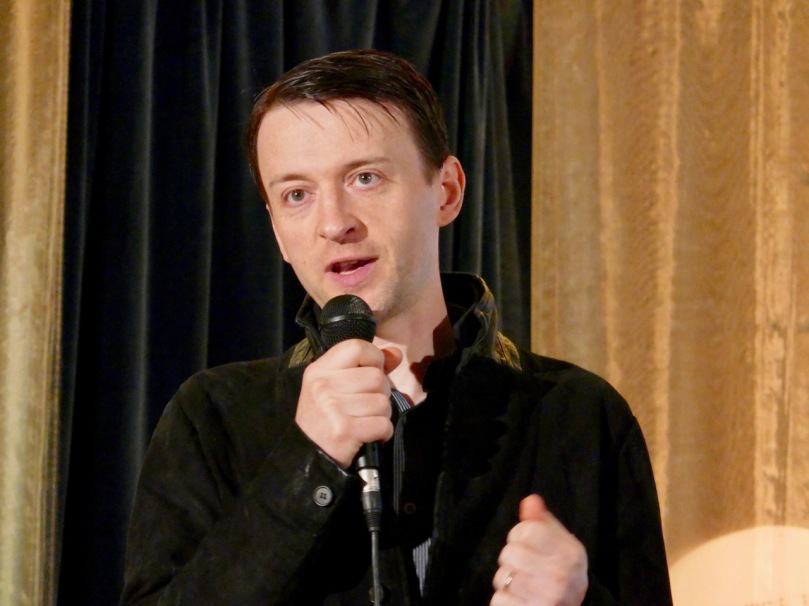 And in between the shorts and the big screen events the star of the show was Schull, buzzing with lively interchanges on the streets and in the pubs and cafes, conversations spilling out onto the streets, speedy young volunteers dashing around the venues, banners waving gaily above the crowds. Celebrities, actors, producers, directors, casting experts, script writers happily mixed it up with the locals.

And the locals themselves featured in several movies, including one (The Wheel) about our friend Sheena’s superbly restored mill-wheel. The hilarious duo of Eileen and Marilyn (aka Terri Lieber and Karen Minihan) played us out tonight with their own take on a local film, made with the help of a great local crew. 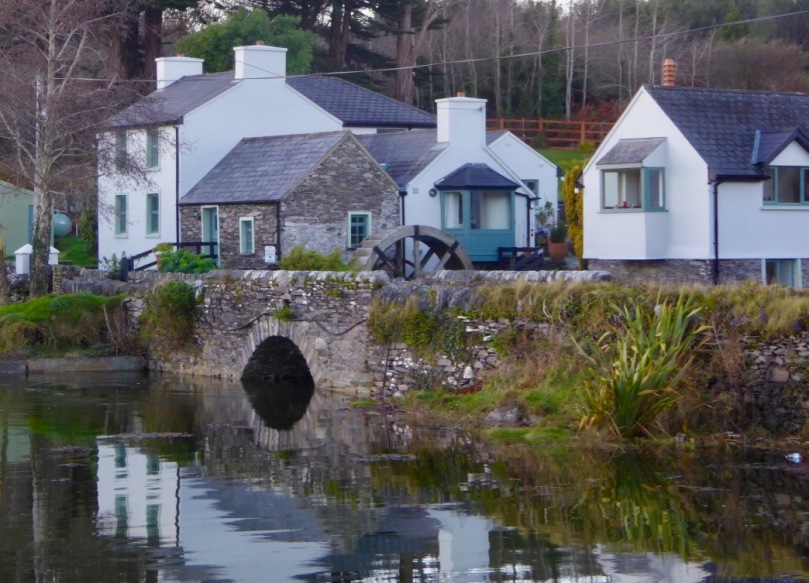 Coosheen Mill, home of Sheena Jolley the esteemed wildlife photographer, and the subject of one of the short movies

We didn’t attend the awards ceremony, but it doesn’t matter to us really who won – except for one thing. Over and over we heard people urging us to see The Swimmer, about local resident and marathon swimmer, Steve Redmond. We didn’t get to see it – but we do hope it won a prize as it seems to have riveted everyone who saw it.

THANK YOU to the incredible committee that puts this Festival together every year – what an amazing job you have done, again! 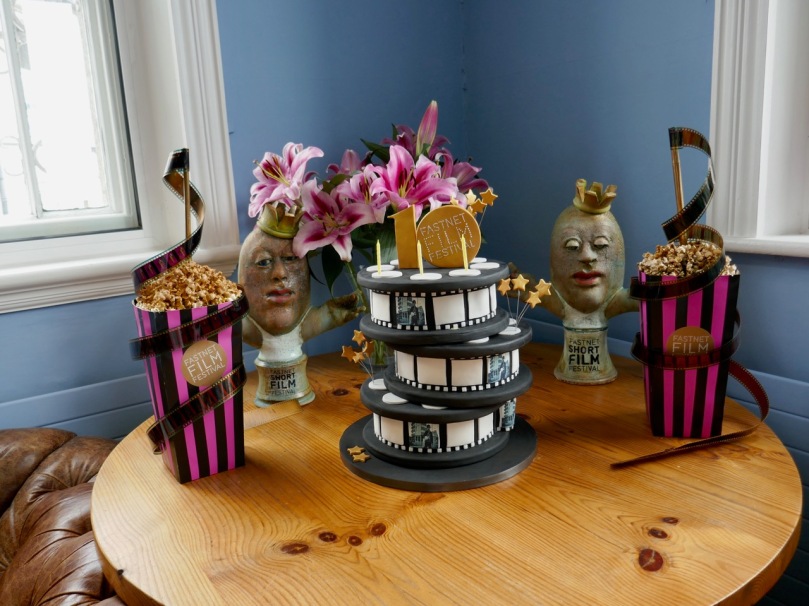 It’s a cake, locally made by a VERY talented baker