It’s May, and time for the Baltimore Fiddle Fair, still in progress as I write this, and keeping us up well into the nights with world class concerts: music from so many cultures that involves the ubiquitous violin. My post today has been sparked off by the opening event held in the restored Dún na Séad – the name means fort of the jewels, which may be a reference to the building’s role in the collection of taxes levied on foreign vessels entering the harbour. The Anglo-Norman castle was built in the early 13th century, was besieged and sacked many times, became a garrison for Oliver Cromwell in 1649 and fell into ruin until it was rescued and underwent a superb full restoration only completed in 2005. Friday’s candlelit opening concert featured a fiddle master from the Shetlands, Aly Bain, and his long term musical collaborator Ale Möller, a multi instrumentalist from Sweden.

One piece in their programme immediately caught my attention: Hjaltadans – literally translated as ‘lame’ or ‘limping’ dance. It’s also the name of a Bronze Age stone circle near Houbie in the Shetlands. It’s said that the two central stones of that circle are a fiddler and his wife who were entertaining a group of Trowies (trolls) and were interrupted in their music making by the rising sun which turned them all to stone. Trolls are undoubtedly related to The Other Crowd in Ireland, and also inhabit the shadows in Scandinavia.

Here is an extract from the latest album from Bain, Möller and Molsky – Troll Tuning: King Karl’s March –

The Shetland troll dance was followed by a Swedish ‘Troll Tuning Set’. Aly and Ale explained that Troll Tuning is a particular way of setting up a fiddle where the strings are tuned AEAC♯, rather than the more usual GDAE. This tuning is sometimes used in Scandinavia, Shetland and in American old-time music (this probably because there were so many settlers from Sweden in North America). The tuning produces very distinctive, haunting music: ‘…Once you’ve heard a trowie tune you can never forget it…’ Even more interesting is the legend that playing such tunes connects the musicians with magical powers. 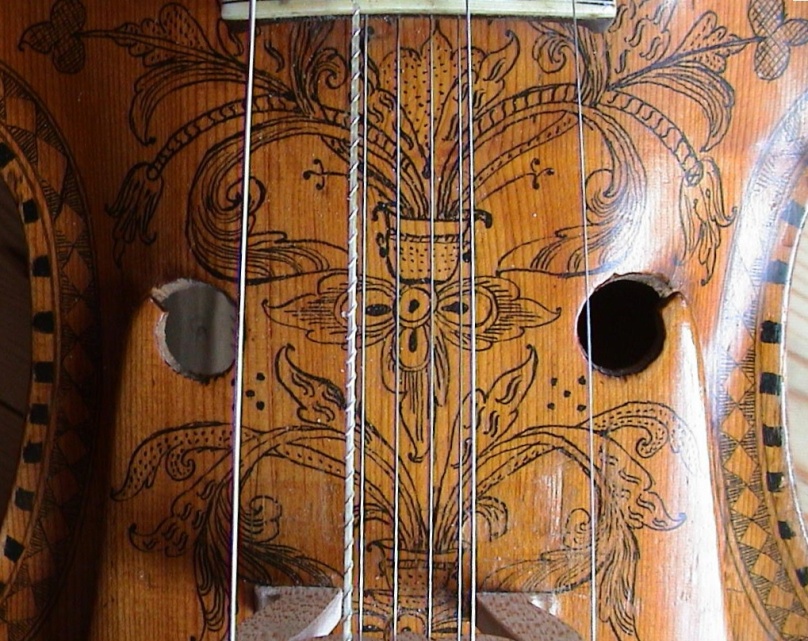 All this reminded me of traditional stories involving musicians and characters from the Otherworlds: they are pretty universal over many cultures. I also thought about a particular type of fiddle from Norway (regularly seen and heard at the Fiddle Fair) which has ‘magical’ associations: the Hardanger Fiddle or Hardingfele in Norwegian. This traditional instrument is usually magnificently carved and inlaid, and has understrings which are not actually bowed, but are tuned to vibrate when other notes are sounded. The tone and ambience of the instrument is unique and compelling: it is easy to imagine the Trowies or Sióg (pronouced Sheeogue: Irish Fairies) requiring such striking sounds for their festivities. But some have thought the Hardingfele has diabolic connections, and in fact many good players were reputed to have been taught to play by the Devil himself. During the 1800s many fiddles were destroyed or hidden both by fiddlers and laypeople who thought ‘…that it would be best for the soul that the fiddle be burned…’ as it was viewed as ‘… a sinful instrument that encouraged wild dances, drinking and fighting…’

In rural Ireland, boys were sometimes dressed as girls so the Sióg would not steal them away

At this time of the year it’s not just the instruments and the music we have to be wary of: throughout the month of May the Sióg are active. Yeats tells how an old man saw them fight once: ‘…they tore the thatch off a house in the midst of it all. Had anyone else been near they would merely have seen a great wind whirling everything into the air as it passed. When the wind makes the straws and leaves whirl, that is the Fairies, and the peasantry take off their hats and say, God bless them…’

The wind is certainly whirling and tearing at the trees outside as I write this: May has seen the return of strong gales – the trees are bending again and Roaringwater Bay is alive with white breakers. Looking out to the islands I bring to mind a tune from the Blaskets, over on the coast of Kerry. Port na pBucai (Music of the Fairies) is a haunted song if ever there was one. It’s said that the islanders were out fishing in their currachs when a storm broke out. It turned into a gale and they feared for their lives as the canvas hulled craft became swamped. Then, the wind suddenly died and they became aware of music playing somewhere around them – an unearthly music. The island fiddler was amongst the crew; when they got safely back to land he found he could remember the tune they had heard. It has passed into the traditional repertoire and has been played ever since.

My own rendition of Port na bPucai on the concertina –

To close, a verse by Seamus Heaney which was inspired by this story of the Fairy music:

On the most westerly Blasket
In a dry-stone hut
He got this air out of the night.

Strange noises were heard
By others who followed, bits of a tune
Coming in on loud weather

Though nothing like melody.
He blamed their fingers and ear
As unpractised, their fiddling easy

For he had gone alone into the island
And brought back the whole thing.
The house throbbed like his full violin.

So whether he calls it spirit music
Or not, I don’t care. He took it
Out of wind off mid-Atlantic.

Still he maintains, from nowhere.
It comes off the bow gravely,
Rephrases itself into the air.