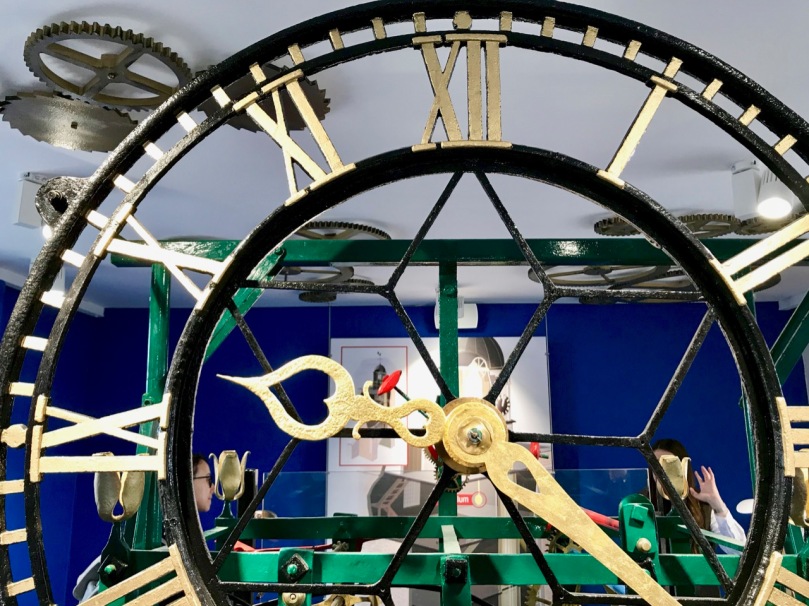 I had time to pass in East Cork on Saturday, so I went off to Youghal (pronounce it ‘yawl’), a substantial town with a great deal of history. I had a purpose in mind: to check out a recently opened museum, dedicated to the way that the time of day was chronicled here over a number of centuries. 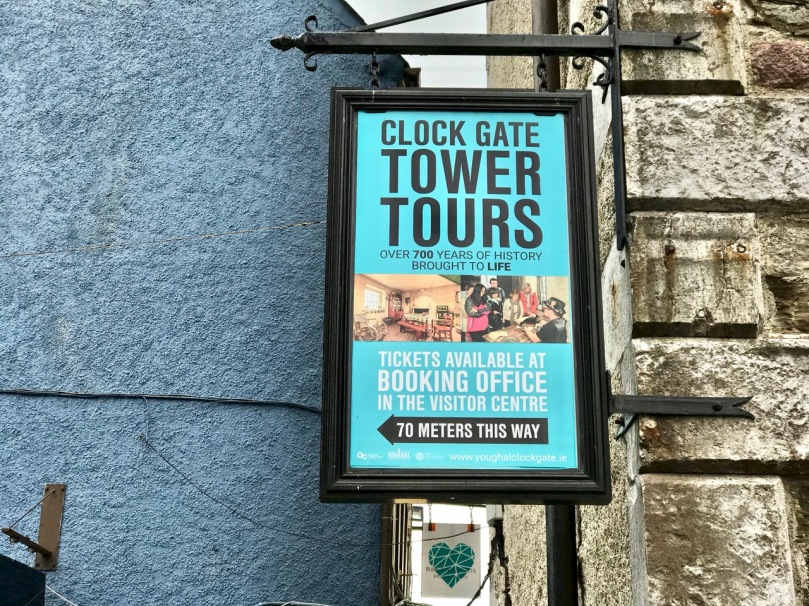 The museum is housed in an iconic building that has spanned the main street of the town for 250 years: the Clock Gate Tower. That’s it bottom centre in the aerial view below, and underneath that is the more usual view of it, from the road. It’s the most visible building in Youghal town, and you can see one of its three clock faces (which all show exactly the same time) in this photograph. 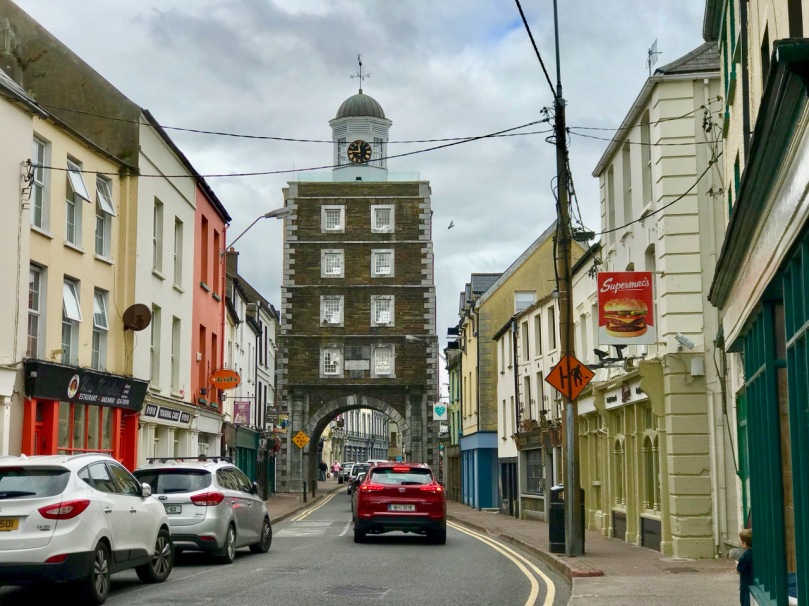 In medieval times Youghal was a walled town, and the site of the Clock Gate Tower was one of the defended entrance points at the south end of the enclosed settlement; Finola has written about the walls here. Masonry walls were fine in the days of bows and arrows but became obsolete when heavy artillery took over: by the late 1700s the town had expanded beyond the walls and the southern gate was redundant: before the Clock Gate Tower was completed in 1777 a medieval gateway known as the Iron Gate stood on the site. 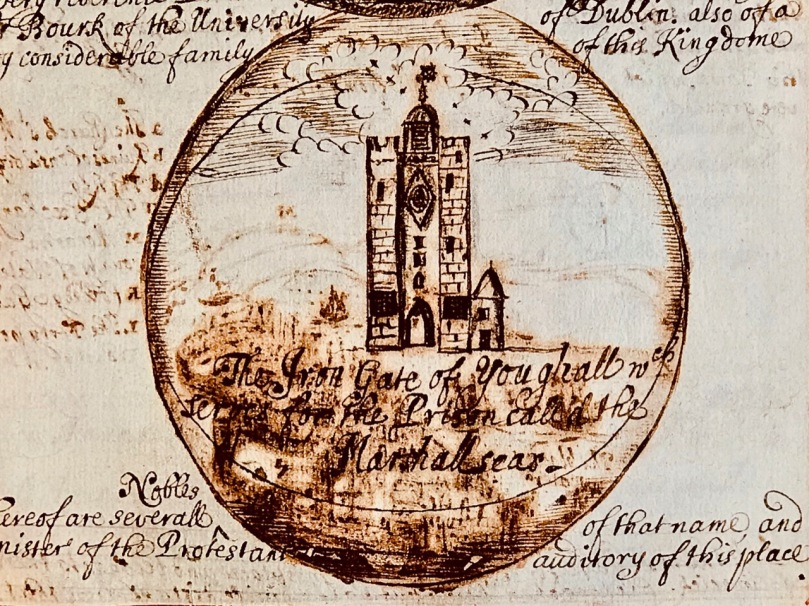 Upper – a map from the Pacata Hibernia showing Youghal – first published in 1633: we are looking at the town from the east. The Iron gate is highlighted: even then the town had expanded beyond the original walls. Lower – the Iron Gate in 1681: by that time the original defensive towers had been embellished with a clock and bell tower

It was perhaps whimsical – in the 18th century – to replace the earlier gate with a building which could be seen as a pastiche of what was there before, but it has certainly succeeded in creating a distinctive landmark which has lasted to the present day, and continues to fulfil the function of a clock and bell tower central to the town.

I took the Clock Gate Tower Tour and can assure you that a great time was had by all who were on it. Before you go, however, make sure you are able for climbing the six flights of steps from street level to the very top: there were no lifts in the 1770s, and no way that any mechanical assistance could now be fitted into the restricted spaces in the building. However, the staircases are safe and easy, and there is plenty of time to pause on each floor to see the fascinating displays that have been installed. I’m not going to reveal everything that the tour includes, or you might think you don’t need to take part! Just a few tasters will suffice.

I will disclose that you will get a feeling for what prison life was like two or three hundred years ago, as this was then one of the main functions of the tower, and one of the floors has been set out as a cell. Our enthusiastic ‘storyteller’ guide, Katy (above) pointed out that the restricted space could have held a large number of inmates, unsegregated and crowded together with no sanitation (other than a window). Prisoners had to pay for their own food, which was hauled up through the same window from friends outside. Even in 1841 the conditions that prevailed here were considered appalling – and Youghal was specifically mentioned in the Report of Inspectors General on the General State of the Prisons of Ireland of that year: 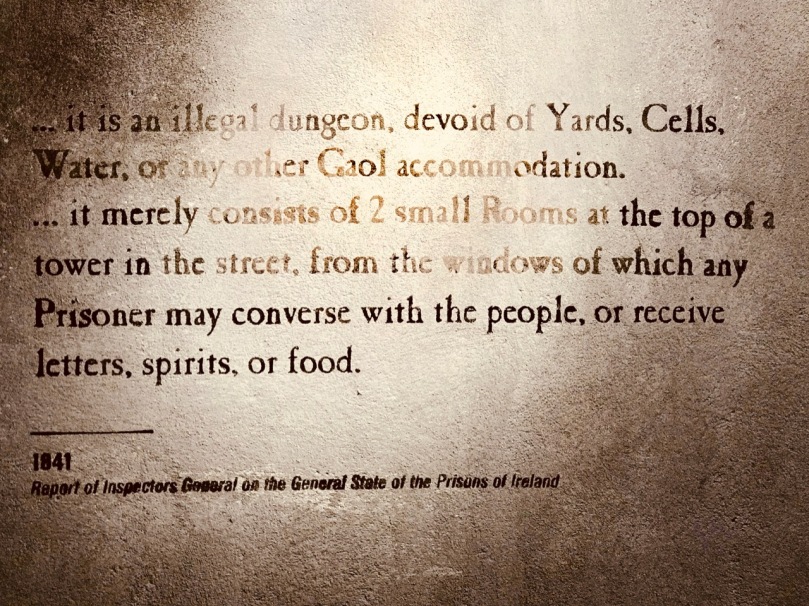 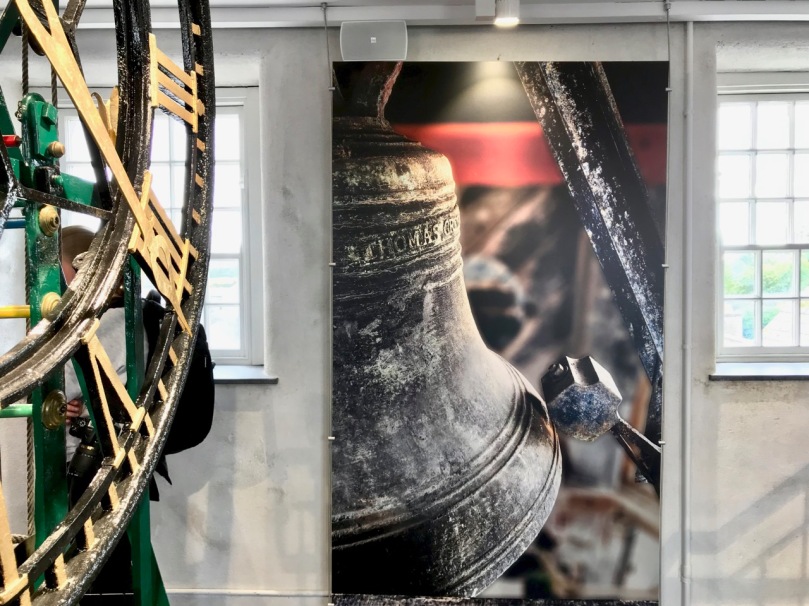 My favourite room was one dedicated to the workings of the clock (header picture and above). From the earliest days the Clock Keeper was also responsible for ringing the town bell:

In more modern times the bell was also employed to summon the fire brigade. Following complaints from some outlying residents of the town that it could not be heard, the original bell was replaced with a larger version, still in use today and connected to the clock mechanism for striking the hours.

From 1915 to 1955 three generations of the McGrath family lived as tenants in the tower: they had responsibility for winding its clock and announcing a death by ringing the town bell. John McGrath, now 80, was born in the Clock Gate and has great memories of his childhood there: he provided a lot of the information to help fit out the fourth floor of the museum as a 1950s interior, and he can be heard talking about his youthful experiences on one of the audio-visual screens: 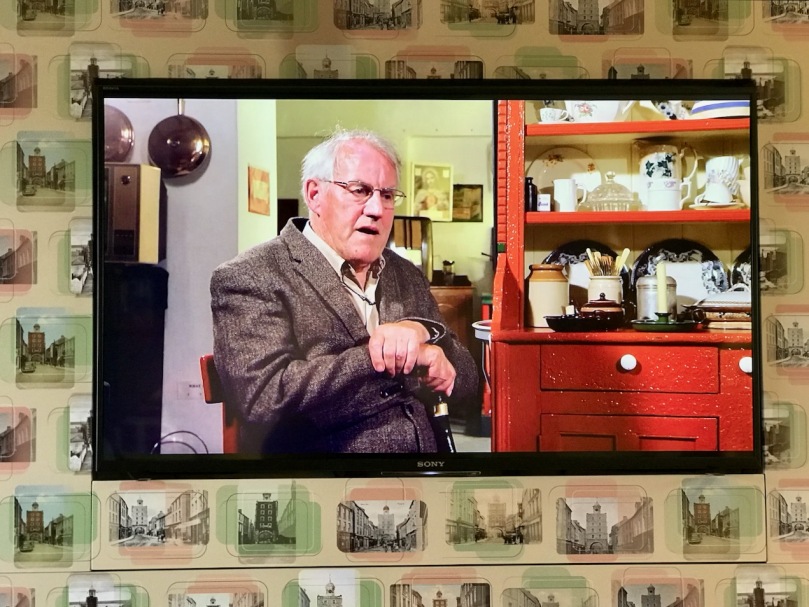 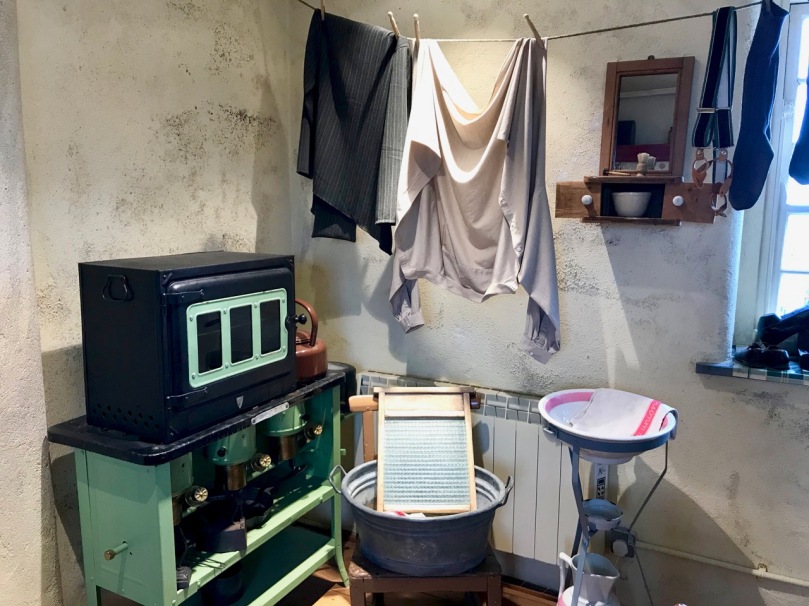 As someone who also grew up in the 1950s (but not in a clock tower!) I can confirm the authenticity of some of the exhibits in the highest room of the museum

Probably the most exciting part of Youghal’s Clock Gate Tower Tour is the culmination: being allowed to ascend to the viewing platform at the very top. It’s a small area, but safely enclosed with unobtrusive glass balustrades. From it you get a panoramic vista in all directions over the whole town and the sea beyond. And, knowing how much history you are standing above, it’s well worth the modest tour fee. It will be time well spent!

This museum experience is proving justly popular: if you plan a visit check in advance with the Clock Gate website. In the summer tours are run seven days a week – I believe winter opening hours are being assessed; there is a phone number on the website. Have a great time . . .