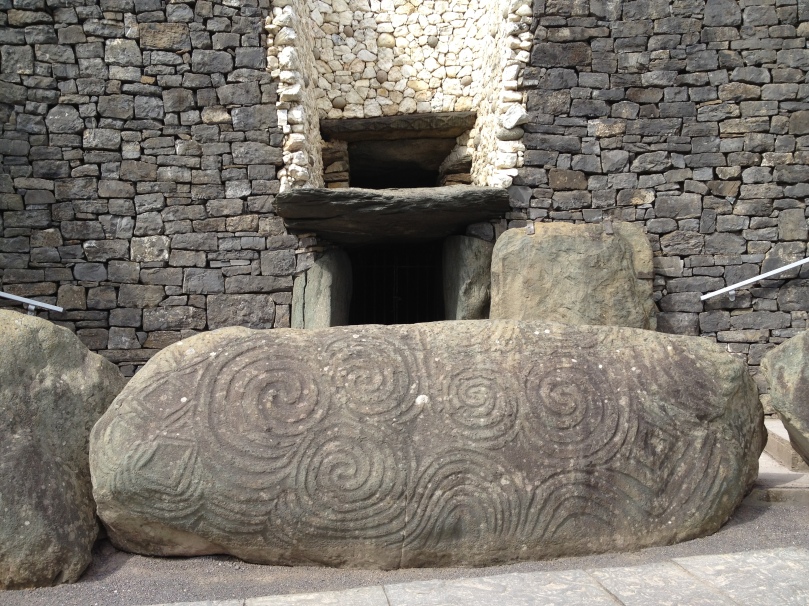 The Entrance Stone at Newgrange.

That’s what solstice means – the sun’s apparent ability to stand still at the mid-winter point. It rises no further south, hangs around that area for a few days, and then starts on its trek back to the eastern sky. For early farmers, like the ones who built Newgrange in the Boyne Valley in Ireland (and Stonehenge and the Pyramids) and like the ones who carved our rock art, such seasonal markings were critical. At Newgrange, an enormous passage tomb built 5000 years ago, the rising sun illuminates the passage and chamber only during the winter solstice. In West Cork, near here, the Drombeg Stone Circle is designed so that the winter solstice sun sets over the recumbent stone, through the two tall portal stones. Drombeg probably dates to the Bronze Age.

There is a good argument that open air rock art may also relate in some way to equinoxes and solstices and days of seasonal change, such as those that were celebrated in the ancient Celtic festivals. So far, the only rock art that has been putatively identified as having a significant solar orientation is the Boheh Stone in Mayo. We decided to visit our favourite rock art site, Ballybane West, on the evening of the 20th December and again on the morning of December 21, to see if anything interesting showed up at sunset or sunrise. We were rewarded in the evening by the rock art glowing beautifully in the slanting sunlight, although we could observe no particular significance about where the sun was setting.

The next morning, although the dawn colours were spectacular when we left the house, the clouds rolled in and obscured the sunrise. Still, it was wonderful to be out on the rock at dawn, listening to the birdsong and feeling in communion with the ancient spirits of this special place.

Happy Solstice to all our Family and Friends!