A damp, grey, Sunday afternoon seemed as good a time as any to find out about a strong West Cork tradition – Road Bowling – the title of this post is the Irish for that. I had come across this ancient sport on a previous visit to Ireland and was intrigued. Friends enlightened me that it was a traditional local pastime which has spread to Armagh and, through emigration, to London and the United States – while other versions of the game exist in Holland and Germany. But the county of Cork – and particularly our western part of the county – is its true home. 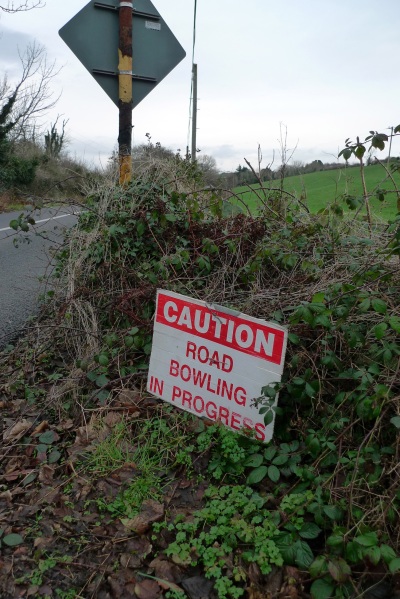 A notable merit of the sport is that it requires absolutely minimal equipment and facilities: an iron ball (or ‘bullet’) weighing 800 grams and 18cm in circumference (note: Ireland is fully up to date with its metrification – miles and ounces have vanished along with the old Irish punt or pound) and about 4 kilometeres of public road. That’s all, apart from a stick of chalk. The road can be anywhere: it’s good if there are some hills and bends. Today I watched a game on the Road out of Durrus going towards Schull. It’s fairly well used (although, as this is Ireland and a Sunday, there’s probably one car passing through every five minutes), but the traffic always gives way to the bowlers.

The object is to throw the iron ball along the road. There are two players – or two teams – in each match, and the match involves one journey along the road in one direction, each player having his own ball. There’s usually another match when the crowd returns along the same route. The winning player or team is the one that reaches the end of the course with the fewest ‘throws’. To throw a player runs up to a chalk mark and, using an underarm swing, propels the ball as far as possible. Regardless of whether or not the ball has hit a wall or drain or whatever, the next chalk mark is made at the point that the ball has stopped moving. There are all sorts of techniques, but nothing – it seems – breaks any rules, unless the player’s foot steps over the chalk mark before the ball has left his hand. And I’m not sure whether anyone is actually watching out for that, as the whole crowd, including the players, spend the entire time engaged in conversation; although this is interspersed at times with shouts of encouragement – or perhaps discouragement, and loud comments on how poor that particular throw was. I was guided through the process by friendly members of the gathering (many of whom suggested that I should have a go myself) and they also assured me that an essential part of the fun was ‘money changing hands’ – a gamble on the match, or on individual throws. Everything seemed so chaotic and informal that I couldn’t work out how this all went on. 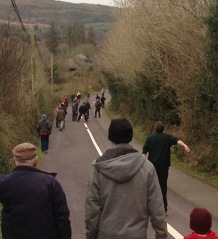 I was interested to see a tuft of grass (a ‘sot’) pulled out of the hedgerow and placed on the road at the point which the thrower should aim for in order to get the best ‘line’. And I was told that a helper known as a ‘road shower’ advises the thrower as to the best trajectory. ‘Shower’ here rhymes with ‘blower’. And – I should have said at the outset – ‘bowl’ actually rhymes with ‘howl’. But the West Cork accents I heard this afternoon were so strong that I only picked up every third or fourth word…

I returned a little wiser about another ingredient of life in West Cork.