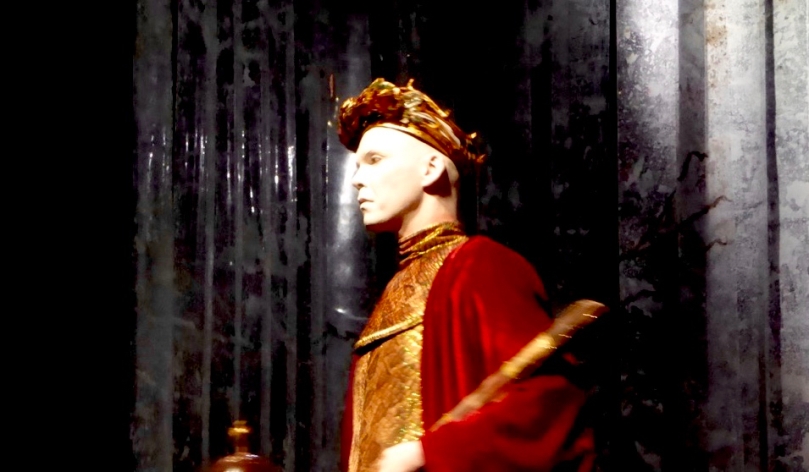 This week we commemorate the 400th anniversary of Shakespeare’s death which occurred on his birthday, 23rd April, in 1616. He was 52. At least, that’s the received wisdom. It’s quite convenient that the two most important events in his life have the same date – we only have the one to remember – and it’s very apposite that this date should also be St George’s Day: St George is thought of as patron saint of England, and Shakespeare is thought of as the greatest writer in the English language – and partly responsible for the flowering of the Elizabethan Age of Enlightenment.

Queen of England and Ireland – the ‘Armada Portrait’ 1588. This painting of Elizabeth I, sometimes attributed to George Gower, is full of symbolism which Shakespeare would have recognised: pearls imply purity, the pomegranate prosperity, the mermaid  ‘the potential destructive nature of females’, and the ruff is shown as a sun halo to depict the ‘Sun Queen’. The paintings show the power of the Navy and its defeat of the Spanish Armada

But isn’t all this a little too convenient? If we believe the history books Shakespeare was a simple soul who was born in rural Warwickshire, the son of a glover who had fallen on hard times. Shakespeare attended the local grammar school, where he would have had a limited classical education. At 18 he married Anne Hathaway, 8 years his senior, and their daughter Susanna was born shortly afterwards. Then he disappeared from the records, re-emerging in London in 1592 where he was described in a pamphlet by Robert Greene as an ‘upstart crow’ flapping his poetic wings. Thereafter he was known as an actor, playwright and theatre promoter, returning to his birthplace to retire and leaving us with the legacy of 38 plays and 154 sonnets. His will bequeathed his ‘second best bed’ to his wife and his estate to his children.

Was William Shakespeare a real person? Probably – there are quite a few records of his professional life: but the rumour mill is full of suggestions that he was not the author of his plays! As Ireland is a renowned land of poets and bards, I felt sure that, somewhere, I would find a notion that this particular ‘bard’ had Irish connections… I was right! 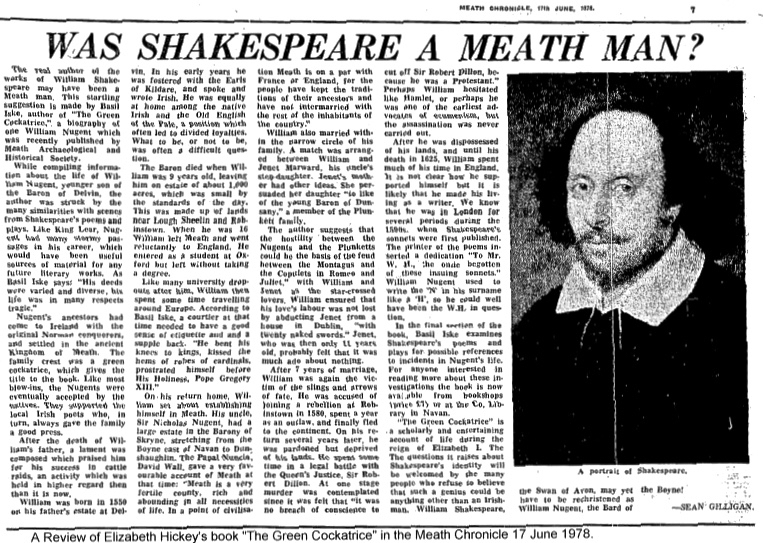 Elizabeth Hickey (1917 – 1999) was a well-known Meath historian and author who lived at Skryne Castle near Tara. Her most famous work is The Green Cockatrice, originally published in 1978 under the pseudonym Basil Iske. In this she traces the career of William Nugent, Baron of Skryne, who lived from 1550 to 1625. According to Hickey Nugent is a very likely candidate for the authorship of Shakespeare’s plays as he ‘…led a life which gave him insights into the kind of political, religious, military, legal and international diplomatic intrigues that populate Shakespeare’s works. For example, he was imprisoned by the state for opposing the cess in Ireland in the 1570s, and he rebelled in 1581, losing a number of supporters to the hangman’s noose and causing him to flee into exile, first into Scotland, then France and Italy – locations which are prominent in Shakespeare’s works. During his exile he met most of the great European leaders, including the Pope, the kings of Spain, France and Scotland, and was involved in Europe-wide planning for an invasion of England…’

Other scholars have suggested that the language use by Shakespeare is, at times, more akin to the English spoken in Ireland in Elizabethan times. One quotes Shakespeare’s character Puck as deriving from the Irish Púca, although the name is also said to have an old English origin. Similarly, Queen Mab  (fairy queen in Romeo and Juliet) is said to derive from Queen Maeve, spelt in Old Irish script as ‘Mab’.

I was intrigued to come across a tradition that Shakespeare composed Hamlet while visiting his friend John Dowland at Dalkey near Dublin, and that the account of the shore of Elsinore is actually based on Coliemore Harbour in Dalkey. There is even a house called ‘Elsinore’ in Dalkey: it dates from 1840. There is also in Dalkey a mosaic plaque to Dowland designed by Sarah Purser.

Coliemore Harbour in Dalkey – does it look like Elsinore?

If you have an hour or so to spare you might have a go at reading Shakespeare was Irish – I kid you not… in Indymedia Ireland – it’s tongue in cheek but very comprehensive. Tempting though it is to pursue the idea that the man himself might have been Irish, it may be best to move on to consider Shakespeare’s influence today in Ireland. There can’t be a professional theatre company here that hasn’t put on some of the plays at various times. Many productions have received international acclaim: we were fortunate to attend the marathon staging of the ‘History Plays’ by the Druid Company from Galway in Skibbereen last year – four plays in seven hours, including a break for supper. After Skibbereen the tour went to New York where it received rave reviews. We were pleased to hear that the production ‘stole the show’ in the Irish Times Theatre Awards this year, wining in five categories. Later, we chanced to meet Thomas Conway, the dramaturg for the production: he told us it had taken eight years to craft the performance!