How fortunate are we? We are free to spend our days wandering the world’s most beautiful landscapes, here in Ireland: landscapes which have changed relatively little over the last five thousand years. They have changed, of course, but the human hand has had less impact in this country than in many other developed nations, especially in these wilder parts. That is why we relish our explorations: we are walking the past.

Top picture: Robert taking in the setting of the monuments at the Kealkill complex. Above: the view towards Kealkill village from Breeny More

Every expedition requires a little pre-planning. This week we were keen to catch up with a group of monuments known as ‘boulder burials’. Finola tells me that, when she was first studying archaeology, they were known as ‘boulder dolmens’: I prefer that term – perhaps because it has a touch of the antiquarian about it – and, in any case, the use of the word burials implies a definitive function which has not been universally borne out with the examples that have been excavated. But I will leave Finola to delve into the specifics of that subject in her post Boulder Burials: a Misnamed Monument? 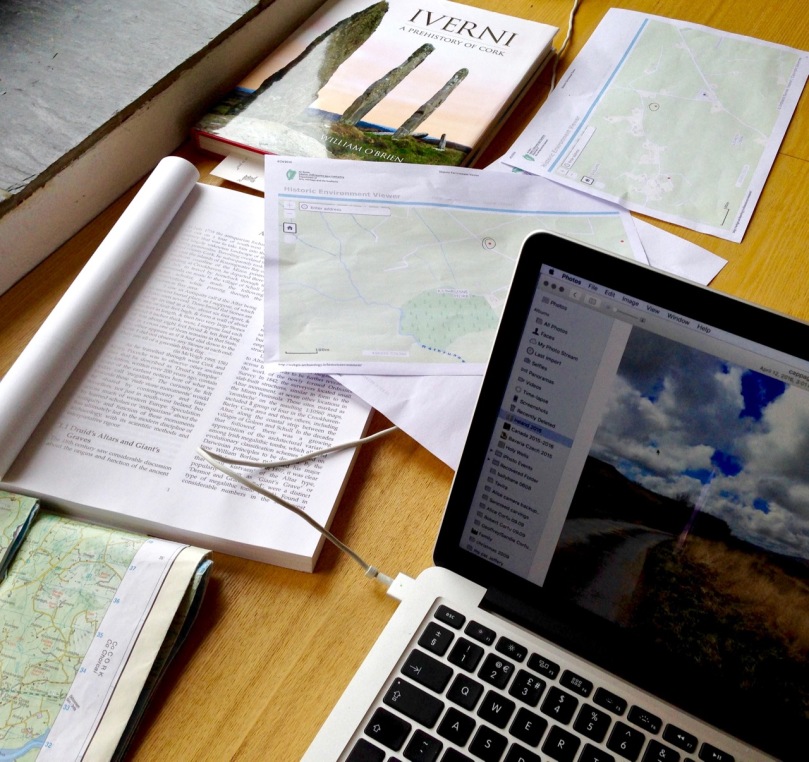 Blogging in progress: prequel to an expedition…

First, we look to the available information: William O’Brien’s Iverni – A Prehistory of Cork (The Collins Press 2012) is an essential primer on the pre-Christian era in this corner of Ireland since the first human foot was set on its shores. Then there are maps to be consulted: the Ordnance Survey Office was created in 1824 to carry out a survey of the whole island for land taxation purposes. The original survey at a scale of 6 inches to 1 mile was completed in 1846 and Ireland thus became the first country in the world to be entirely mapped at such a detailed scale. From the outset, known historic sites and monuments were recorded and the present Discovery Series at 1:50,000 scale provides a wealth of information to the fingertips of historians and adventurers.

One of our bibles: the Discovery Series of the 1:50,000 Ordnance Survey maps – well used and well worn! The monument sites are marked in red

Before setting out we usually consult with the Archaeological Survey Database of the National Monuments Service: this gives us the fine detail on where to find recorded historic sites. Yet in the end the most valuable information often comes from knocking on doors. Farming families here often go back through many generations and local knowledge is always passed down through them. It’s here that you sometimes pick up the ‘stories’ that are associated with ancient sites – for me, these are just as interesting as any formal records.

View to Bantry Bay across the Breeny More archaeological site

This week our travels brought us to the Breeny More and Kealkill complexes, high up in the hills above Bantry, heading towards the wonderfully named Cnoic na Seithe – the Mountains of the Spirits. This was on a perfect spring day: the views all the way down the bay with the Beara on one side and the Sheep’s Head on the other can only be described as spectacular. 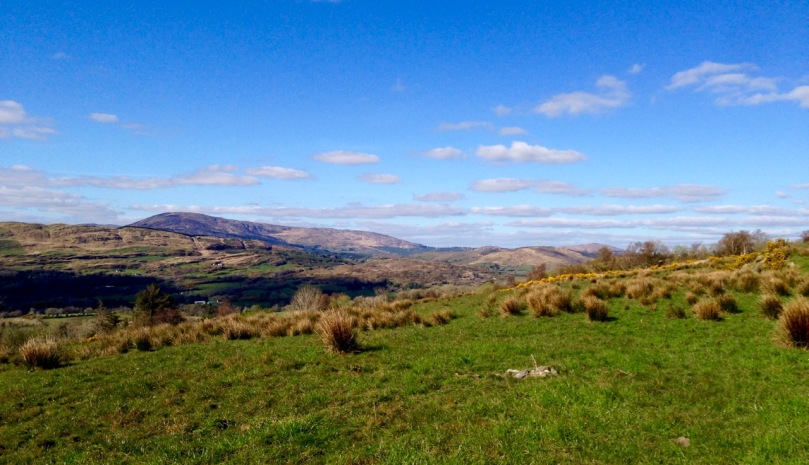 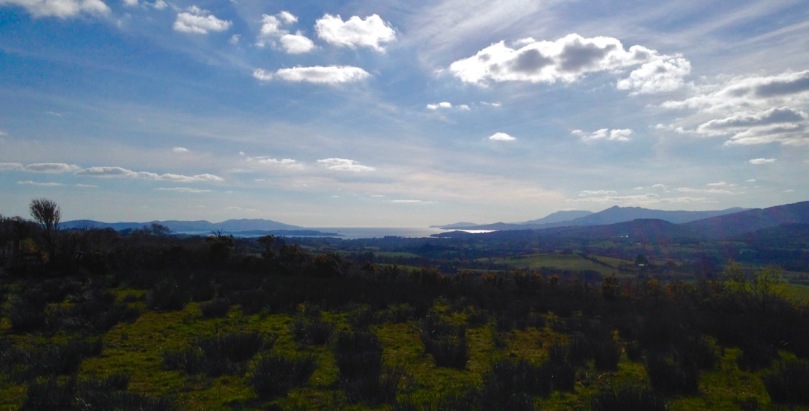 Two views from the Kealkill complex

It can’t be accidental, surely, that these ancient sites occur in places like this, that make the senses reel? In many cases there are long views in all directions, often taking in prominent horizons, hilltops, the sea, inlets and islands. ‘As far as the eye can see’ is an expression that truly comes into its own: these vistas must have had special meanings to the ancestors who were here in the Neolithic and Bronze ages. Were they trying to define it in some way by building such impressive large-scale structures, most likely for some ceremonial purpose? It was certainly not construction work which could have been undertaken lightly or frivolously. Here’s O’Brien in Sacred Ground, Megalithic Tombs in Coastal South-West Ireland (NUI Galway 1999):

…Antiquarian interest in Ireland dates from the visit of Edward Lhuyd at the end of the 17th century and was encouraged by the discovery of great megalithic centres like the Boyne Valley in Co Meath and Carrowmore in Co Sligo. The early antiquarians were to link these ‘Giants Graves’ to invaders or colonists from the East, to Scandinavian incursions and eventually to the events and characters of early Irish literature… 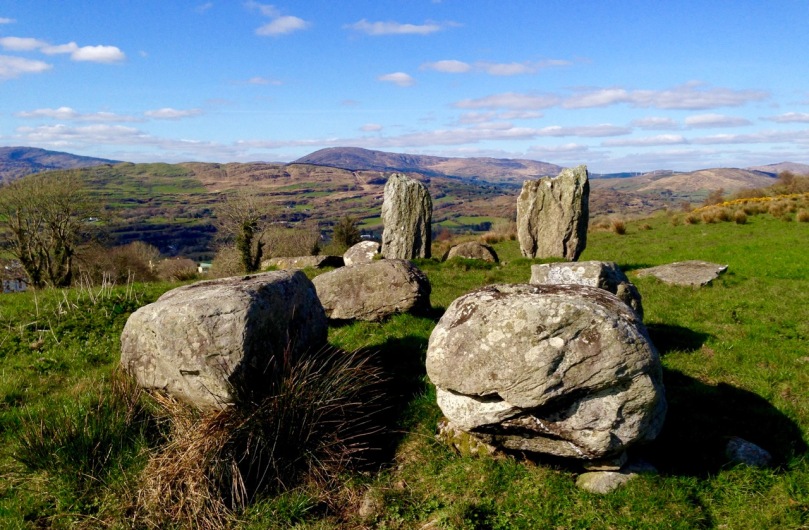 The Breeny More complex:  no less than four boulder burials, a multiple stone circle and a (much later) ring fort, all on one superbly located site

A cause for wonder: the tall standing stone at the Kealkill complex. A stone circle lies to the west while a radial cairn is behind (to the south of) the stone pair

So, it’s Finn McCool and the Tuatha de Danaan that we have to look to, perhaps, for explanations as to why we find these incursions on our natural landscape standing as solidly and unchangingly as they did a few millennia ago. Perhaps not quite unchangingly, in fact: archaeologists have had a hand in the present day appearance of some of them. In the photo above you can see me wondering at the 4.6 metre high megalith which is part of the Kealkill complex. When the site was explored by Sean P O’Ríordáin in 1938 that stone had broken off and had fallen: O’Ríordáin re-erected the remaining part of the menhir. The original would have been at least a metre higher than what we see today. 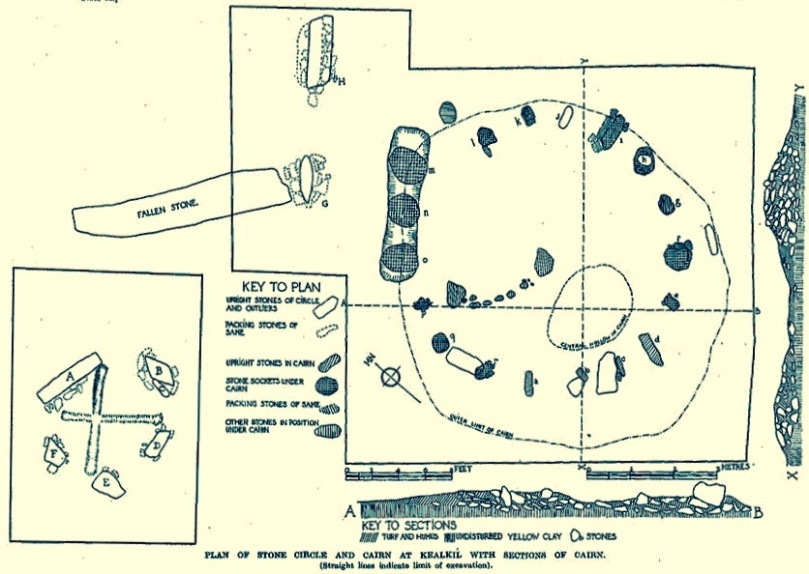 From O’Ríordáin’s published report of the excavation of the Kealkill complex: top, the taller standing stone being re-erected and, below, a survey diagram of the findings. From the Journal of The Cork Historical Archaeological Society, Volume XLIV ,1939

The Breeny More site and the Kealkill complex are near neighbours. Both contain various artefacts: standing stones, stone circles and boulder burials. Kealkill also has a radial cairn. Both are set against a background of moorland, mountain and bay. Kealkill is easily accessible although boggy.

Most sites are on private land and permission should always be sought to visit, unless it is obvious that access is welcomed, as here at Kealkill

Our second archaeological adventure this week was also boulder burial orientated. This was close to home in the townlands of Rathruane, Lisheen Lower and Bawngare. Again, Finola has detailed the findings in her post, but I was struck at each of these sites that the their settings, too, were on high ground with excellent distant views. In each case, mountains were prominent. I couldn’t help thinking that the boulders could have been placed where they are specifically because of the visibility to the various peaks. Might it even be that territories were marked out by these huge stones? Boundaries have always been important to human strategies: we have been identifying and ‘naming’ the land before records began to be written. Field names, townland names, parishes, baronies… A whole lot more to be researched, visited and recorded. Our long walk through Ireland’s past has barely begun!