If you travel by water on the Shannon, you can still take your boat up to the bridge at Drumsna, Co Lietrim (above). Just below the bridge is a stone wharf which is the present limit of navigation on that part of the river, a great loop which was bypassed in 1848 by a 2.6km canal. The towns of Drumsna and Jamestown were once thriving river ports but went to sleep once the canal was built. When Tom and Angela Rolt arrived in Drumsna in 1946 the quay there was in ruins, and they had to anchor their boat Le Coq in the shallows and row their small dinghy into the village. 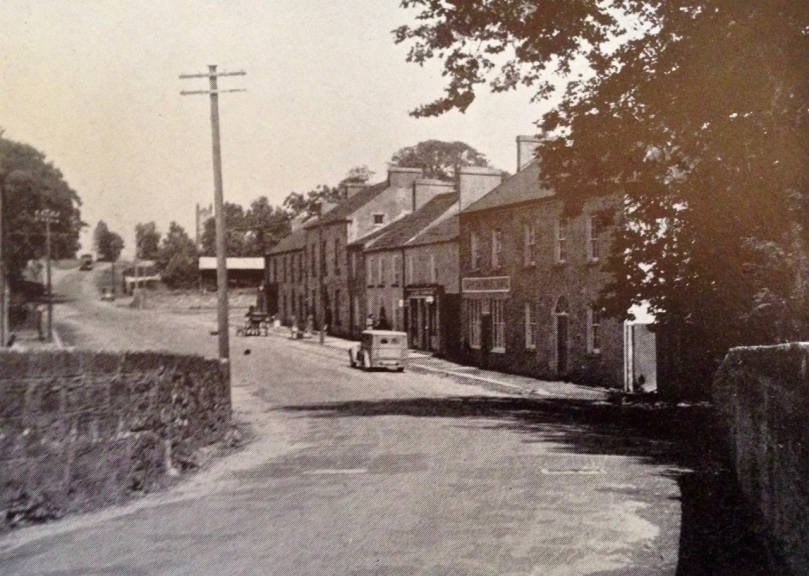 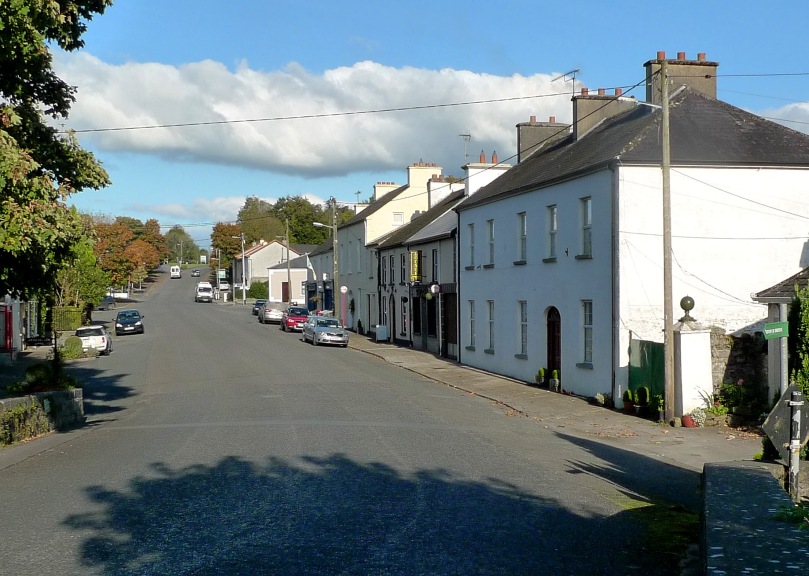 Upper picture – Drumsna in 1946, a photograph taken by Angela Rolt. Lower picture – the same scene in 2016; 70 years have passed but there have been few changes in the fabric of the village

The Rolts were interested in Drumsna because of its associations with Anthony Trollope, who readers will remember for his introduction of post boxes into Ireland. While working as a Post Office Surveyor he was stationed in Drumsna during the 1840s, before the Great Famine, and began his writing career with the novel The Macdermots of Ballycloran (published in 1847). It was not a success but he persevered and became one of the most prolific writers of all time, publishing no less than 47 novels and many more short stories and works of non-fiction during his lifetime. He died in London in 1882, aged 67.

Drumsna was historically important as one of the crossing points of the Shannon: it was the site of a ford until the stone bridge was built, probably in the 18th century. This bridge, one of the oldest on the river, once had a blind eye arch where prisoners were jailed and, reportedly, a handball alley on the side where many a  famous championship was held. The plaque on the bridge today (above) remembers an uprising from 1795

Trollope was living in Ireland at the time when the canal system was thriving. He was certainly familiar with travelling by water on the canals, as we can see through this excerpt from his second novel, The Kellys and the O’Kellys (also inspired by his experience of life in Ireland and a success – it was published in 1848 and sold 140 copies). Trollope was 33 when he wrote this book and he must have had direct personal experience of the passenger boat services running out of Dublin on the Grand Canal:

We will now return to Martin Kelly…. He started for home, by the Ballinasloe canal-boat, and reached that famous depot of the fleecy tribe without adventure. I will not attempt to describe the tedium of that horrid voyage, for it has been often described before; and to Martin, who was in no ways fastidious, it was not so unendurable as it must always be to those who have been accustomed to more rapid movement. Nor yet will I attempt to put on record the miserable resources of those, who, doomed to a twenty hours’ sojourn in one of these floating prisons, vainly endeavour to occupy or amuse their minds. But I will advise any who from ill-contrived arrangements, or unforeseen misfortune, may find themselves on board the Ballinasloe canal-boat, to entertain no such vain dream. The ‘vis inertiae’ of patient endurance, is the only weapon of any use in attempting to overcome the lengthened ennui of this most tedious transit. Reading is out of the question. I have tried it myself, and seen others try it, but in vain. The sense of the motion, almost imperceptible, but still perceptible; the noises above you; the smells around you; the diversified crowd, of which you are a part; at one moment the heat this crowd creates; at the next, the draught which a window just opened behind your ears lets in on you; the fumes of punch; the snores of the man under the table; the noisy anger of his neighbour, who reviles the attendant sylph; the would-be witticisms of a third, who makes continual amorous overtures to the same overtasked damsel, notwithstanding the publicity of his situation; the loud complaints of the old lady near the door, who cannot obtain the gratuitous kindness of a glass of water; and the baby-soothing lullabies of the young one, who is suckling her infant under your elbow. These things alike prevent one from reading, sleeping, or thinking. All one can do is to wait till the long night gradually wears itself away, and reflect that, Time and the Hour Run through the Longest Day.

I hardly know why a journey in one of these boats should be much more intolerable than travelling either outside or inside a coach; for, either in or on the coach, one has less room for motion, and less opportunity of employment. I believe the misery of the canal-boat chiefly consists in a pre-conceived and erroneous idea of its capabilities. One prepares oneself for occupation–an attempt is made to achieve actual comfort–and both end in disappointment; the limbs become weary with endeavouring to fix themselves in a position of repose, and the mind is fatigued more by the search after, than the want of, occupation.

Martin, however, made no complaints, and felt no misery. He made great play at the eternal half-boiled leg of mutton, floating in a bloody sea of grease and gravy, which always comes on the table three hours after the departure from Porto Bello. He, and others equally gifted with the ‘dura ilia messorum’, swallowed huge collops of the raw animal, and vast heaps of yellow turnips, till the pity with which a stranger would at first be inclined to contemplate the consumer of such unsavoury food, is transferred to the victim who has to provide the meal at two shillings a head. Neither love nor drink – and Martin had, on the previous day, been much troubled with both – had affected his appetite; and he ate out his money with the true persevering prudence of a Connaught man, who firmly determines not to be done.

He was equally diligent at breakfast; and, at last, reached Ballinasloe, at ten o’clock the morning after he had left Dublin, in a flourishing condition. From thence he travelled, by Bianconi’s car, as far as Tuam, and when there he went at once to the hotel, to get a hack car to take him home to Dunmore…

Long distance travel within Ireland by inland waterways was the preferred form of transport in the first half of the 19th century. The alternative was the stage coach: this was no faster than canal travel because of the sometimes tortuous routes which roads took, and the conditions of the roads themselves, particularly in the winter. It must be significant that in the early years of stage coach travel only departure times were advertised: the journey would take as long as conditions permitted. Coaches were notoriously uncomfortable. At least the canal packet boats were relatively smooth and passengers had the opportunity to stretch their legs on deck. Everything changed, of course, with the coming of the railways as the century progressed. 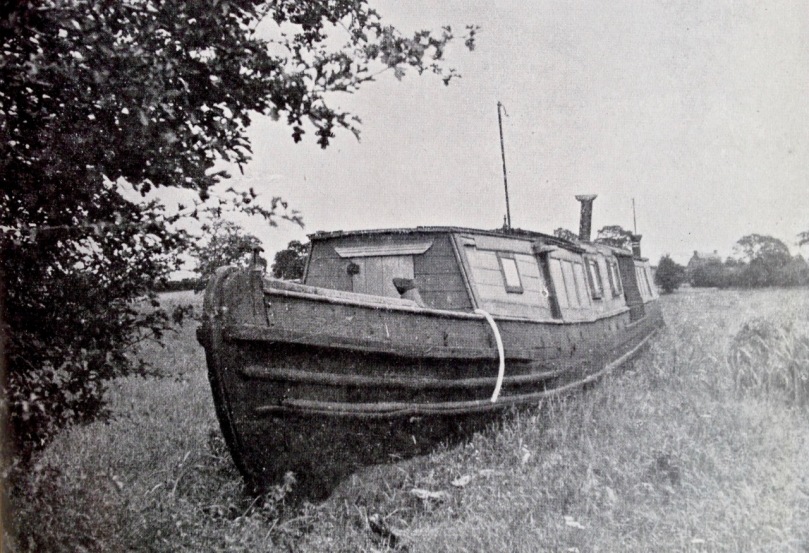 The last days of the former express passenger boat Duchess Countess, photographed by Angela Rolt in the late 1940s. The Rolts initiated attempts to have the boat preserved, but these were unsuccessful

Rolt mentions passenger packet boats or ‘fly boats’ in England in his later book which was published in 1950. In The Inland Waterways of England, George Allen and Unwin, he describes:

…the miraculous preservation by sinking of the Bridgewater Canal passage boat Duchess Countess (a name recalling the titles of the Bridgewater family). This old boat was eventually raised and, still in substantially original condition even to her cabinwork, began a new lease of life as a houseboat. She was moved on to the Welsh section of the Shropshire Union Canal near Frankton Junction where she is still occupied at the time of writing although, owing to the deterioration of her hull, she has now been drawn out of the water. The Duchess Countess was the last packet boat in regular service. In the heyday of her career as a packet boat she proudly mounted a great curved knife-blade on her bow. This was of much more than symbolic significance, for it was so contrived that it would sever the towline of any boatman who failed to give way to her… …Very soon the Duchess Countess must inevitably disintegrate, and with her passing the last tangible link with these once extensive but little known canal passenger services will be irretrievably lost…

Upper picture – a rare photograph of the Duchess Countess still in use  on the canals (courtesy British Waterways Archive – date unknown) and , lower picture – a modern line drawing of the boat. Both images show the blade on the prow which could slice through the towlines of any unfortunate boat which did not get out of the way in time!

Angela Rolt photographed the Duchess Countess on the canal bank and, fortunately, an early photograph of the boat in its working days is preserved. This shows the scythe-like blade on the prow and confirms that the express boat service had priority over all other traffic on the canals. I am not aware that any of the Irish passenger boats were so equipped but, using teams of horses which were frequently changed along the route, they were evidently able to keep up a continuous speed of around 10 miles per hour, which was no mean feat at the time. 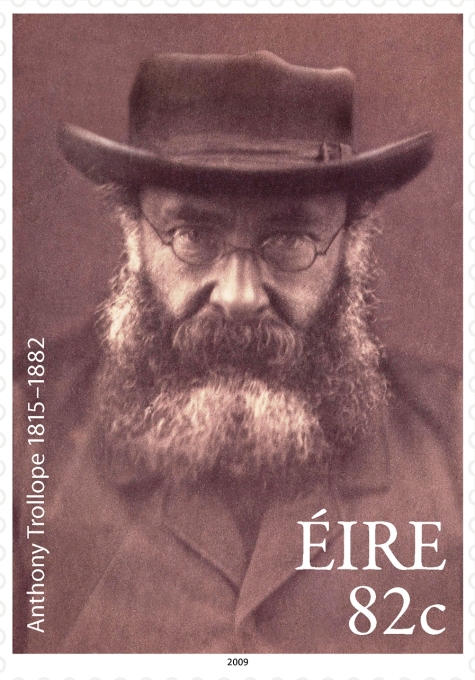