In Ireland February 1st – St Brigid’s Day – is thought of as the first day of Spring: we begin to look out for snowdrops and daffodils, and expect to see a ‘real stretch’ in the evenings. Of course, we also make our St Brigid’s Cross to ensure good luck and fertility to the household. It’s no coincidence, I’m sure, that the church festival of Candlemas (St Blaise’s Day) falls on the following day: February 2nd. Traditionally, people took candles into the church to be blessed that day, and these were used for the rest of the year.  Surely this is something else connected with the turning of the year and the coming of the light?

Header – a tantalizing glimpse of Barley Lake seen from the N71 road north of Glengarriff. Above – the winding boreen that heads up towards Crossterry Mountain

To make our own celebration of the arrival of Spring we set out on February 2nd on a trip to Crossterry Mountain in County Cork, just north of the road running west to the Beara Peninsula from Glengarriff. This was unexplored territory for us, but we had long planned to visit Barley Lake: if you travel on the spectacular N71 road from Bantry over to Kenmare you get tantalising glimpses of this corrie or tarn away to the west, just before you pass through the first of the tunnels. 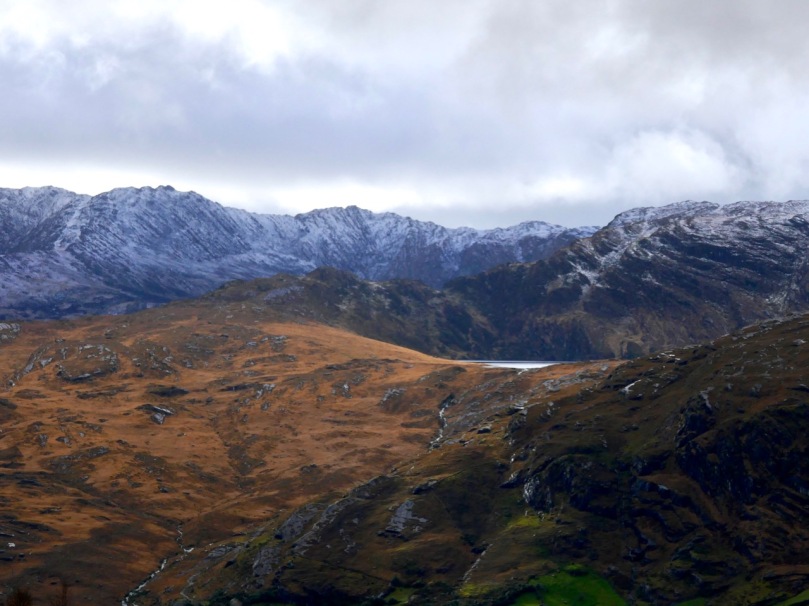 If you are into geology, Barley Lake is a classic demonstration of how Ireland’s land mass was moulded by the movement of the great glacier sheets towards the end of the last Ice Age, some 10,000 years ago. As the melting glacial ice moved south, it carved out and dragged huge boulders, which ‘plucked’ or excavated the land surface, leaving craters which filled with water after the ice melted. These are known as ‘corrie lakes’, ‘ribbon lakes’ or ‘tarns’. Barley Lake is one such crater; another is the lake at Gougane Barra in the Shehy Mountains, also in West Cork. 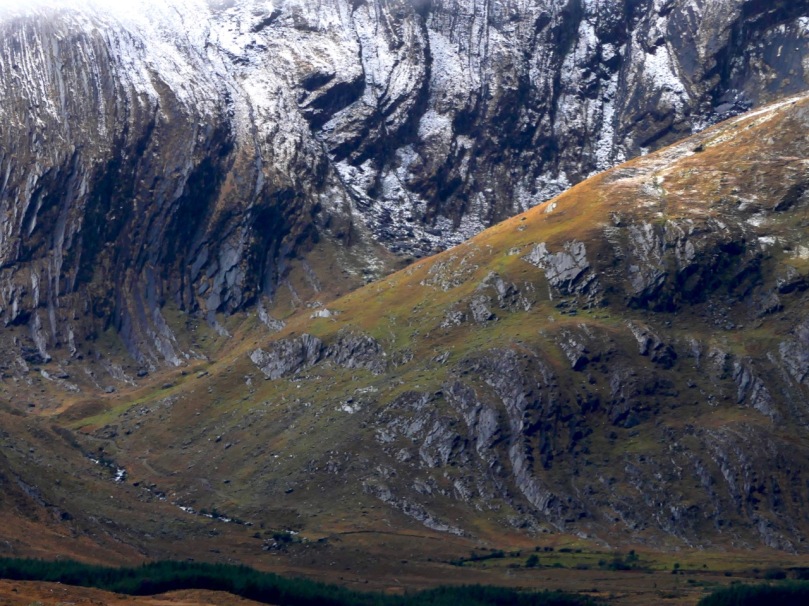 Upper – how ‘corrie lakes’ or ‘tarns’ are formed (DooFi  via Wikipedia). Above – glacial geology clearly delineated by fresh snow on the way to Crossterry Mountain

The road to the lake is remote and picturesque, but we were surprised to find quite a sizeable settlement high up on the mountainy road. We were not quite sure what it is called, but the townland is Crostera West. We enjoyed some of the names we found on the map: Lake Derreenadavodia, Magannagan Stream . . . 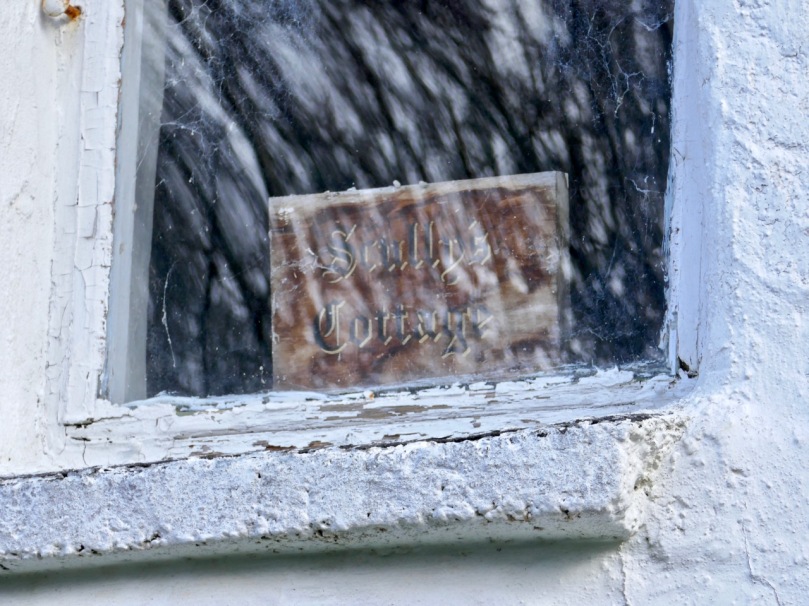 Driving, you approach Barley Lake from the north side. On the extract from OS Map 85, below, you can see the narrow way that winds up to a high point – the 300 metre contour, where there is a place to park, and then proceed on foot. Look carefully at the way the road is drawn here – it’s no exaggeration: there really is a series of hard S bends that have to be negotiated to get up the mountain. We should have photographed them, but I was hanging on tight to the steering wheel, while Finola was hanging on to anything she could – and we found ourselves driving into a blizzard!

Middle photo – a relatively straightforward part of the drive up the mountain, before we reached the S bends! Lower photo – snow coming in as we reached the summit

It was a day of weather contrasts: some of the journey was made in that beautiful low sunlight that we have been experiencing at the start of this year, while at other times the wind whipped suddenly in and threw sleet and ice at us. On the top we found a good covering of snow on the rock-strewn path that we had to take to reach the shores of the lake. We braved the elements, and passed by peat workings that looked to be still in use. 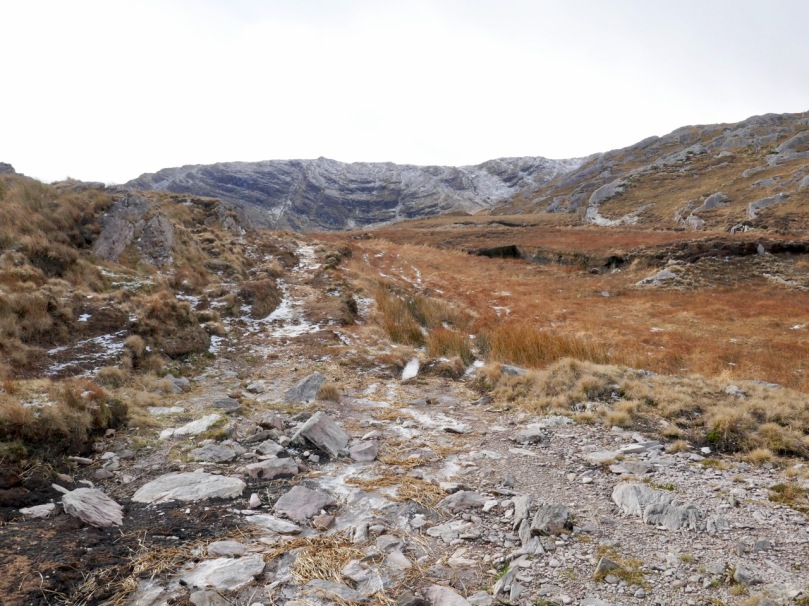 Top – the path to the lake. Above – peat workings

The lake itself felt remote and lonely – and unvisited on our winter day, although I gather many hikers aim to circumnavigate the shores. We didn’t: it takes several hours and the light was beginning to fade with the incoming snow. It would be fair to say that it’s bleak up there, but – as always in Ireland – beautiful. Our only companions were sheep, who seemed to space themselves out neatly on every available ledge.

Robert – finding his own ledge! Thank you to Finola, who took all the photographs on this journey

In spite of some challenging conditions, it was a grand day out. As we wended our way carefully back down the bends, we admired the wonderful distant views, and – as we approached the glens of Glengarriff, fortuitously back in sunlight – paused to examine more geological formations.

We never tire of exploring West Cork, and we will never run out of destinations: as always, our delight is the out-of-the-way side roads – Ireland’s speciality. 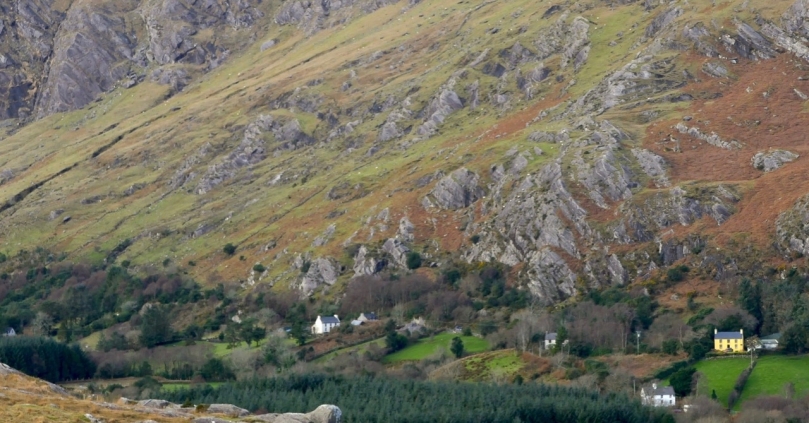