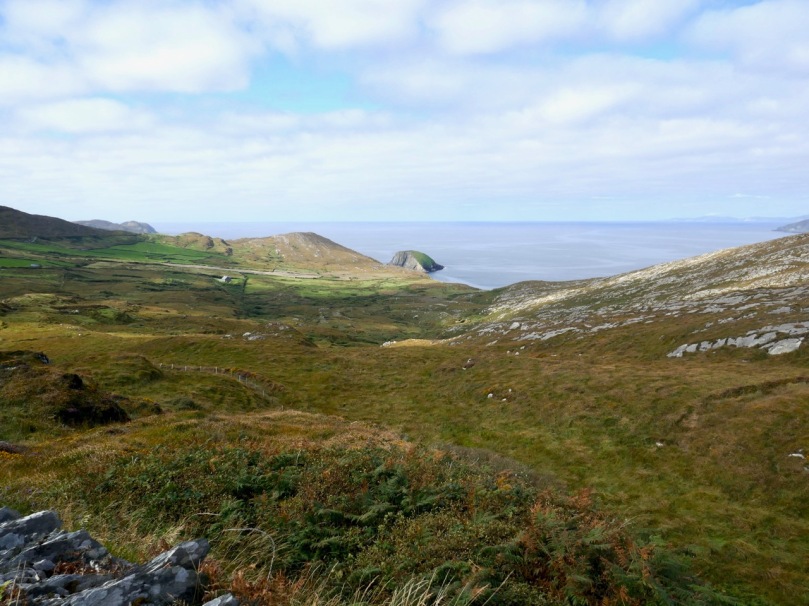 Dhurode mine on the far north shore of the Mizen Peninsula was established by the Rev Robert Traill (above) in 1843. I’ve written about Traill in my series on Saints and Soupers. He featured largely in the episode on tithes, and again for his heroism at the height of the Famine. He deserves a post of his own and that will come. Besides everything else, he was obviously an entrepreneur. He joined forces with a navy man, Captain Forster, to establish in 1843 the Consolidated and West Carbery Company. 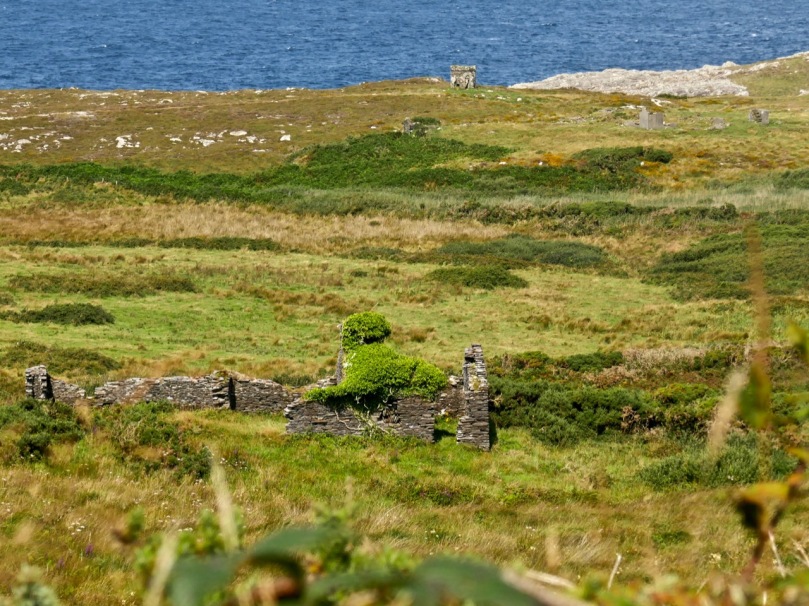 This is what you can see from the road: the powder house is silhouetted on the horizon. The ruined building in the foregound may relate to the water wheel and stamps

The Metal Mines of West Cork by Diane Hodnett is my chief source of information for a lot of what follows about the mine. It’s an outstanding book of scholarship and a, er, mine of information (sorry). She writes : In June of that year [1843], an adit had been started on the course of the lode, and driven over 180 feet, with a whim shaft sunk down to it. By June the following year, Dhurode Mine had sold 97 tons of copper ore at Swansea, and received £331 4s in payment.

There’s a great description of the mine from April 1846 in Diane Hodnett’s book. The potato blight had first hit the previous autumn, but most people had managed to make it through the winter and the full horror of Famine in the Mizen had still to dawn. A man called St Pierre Foley had visited the mine and this is what he saw:

Dhurode is about four miles NW of Crookhaven. It is situated on Dunmanus Bay, placed amphitheatrically like, and is now well studded with neat slated cottages, built for the use of miners employed in the works. The Manager is Henry Thomas. Ore: yellow copper pyrites and is variable in its assay. There is a good horse whim erected for drawing, water wheel and stamp heads with sufficient water power for crushing etc., the ores, and all the necessary offices, working shops and sheds, built around the mine in a very convenient and picturesque manner. 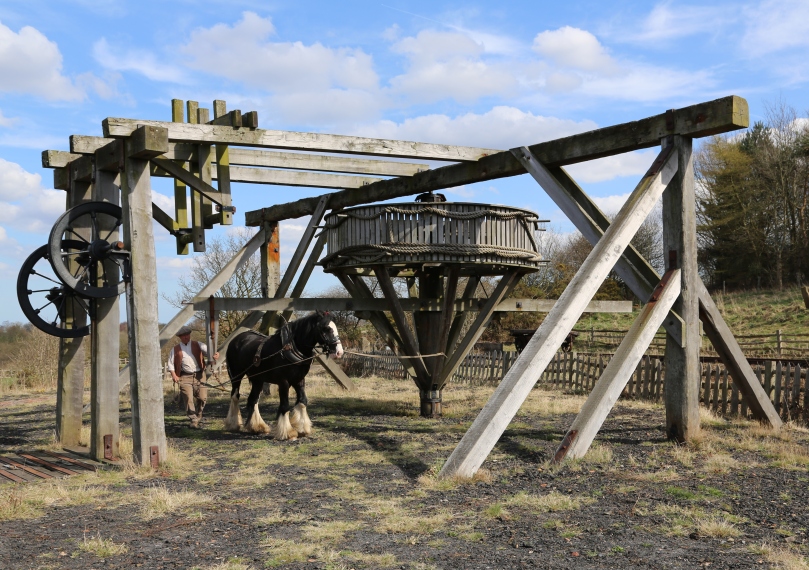 This is a photograph of a horse-powered whim, used for drawing up materials to the surface. This photo is from the Beamish Museum, County Durham, England, and used under the Creative Commons license

Some cargoes of ore have been shipped from this mine. New roads are being built through the mountainous district, which will assist considerably in facilitating the carriage of the ores to the safe and commodious harbours at and along the Crookhaven coast, beside expediting and ensuring regularity of shipment – a matter depending too much on certain states of weather, as regards the Dunmanus coasts.

The restored 19th century waterwheel and tin stamps at Geevor Tin Mine, Cornwall, England, used under the Creative Commons license

S0 – a promising start to this enterprise but by the autumn of 1846 it was becoming clear that the potato harvest had failed again and that West Cork was heading into a full-blown disaster. Robert Traill, as principal shareholder, could not invest time or money in the mine, being fully occupied with the calamity on his doorstep and his duties to the Schull Relief Committee and his own flock. The manager, Captain Henry Thomas (one of the famous Thomas brothers, Mine Captains all, who managed several mines in Ireland – see Robert’s post, Irish Poldarks) carried on until 1850, but admitted that very little was being done, given the state of the countryside. 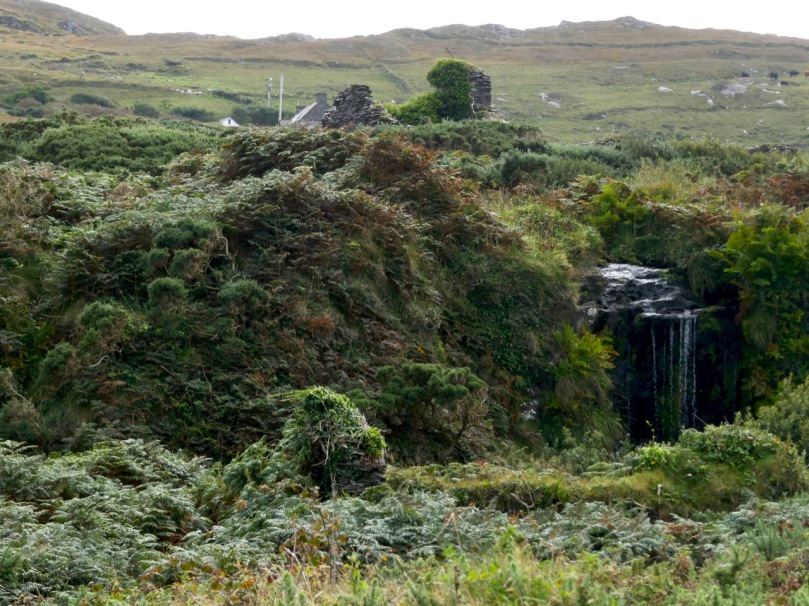 The waterfall and the remains of the stamp house below it

There is little indication now of the ‘neat slate cottages’ not even as much as at the Gortavallig Mine about which Robert is writing today. At Gortavallig, they are known as the Cornish Miners’ Cottages, and it is likely that Cornish men were imported to work the Dhurode Mine too, although local people would have filled many of the positions, as they did at Gortavallig, including women and children.

This may have provided sufficient employment for some to enable them to survive the worst of the Great Hunger. It’s interesting to speculate here about those who worked at the Mine – Robert Traill was famously anti-Papist and until 1847 had, by his own confession, never been inside a Catholic house. There was a large population of poor Protestants on the Mizen – Traill had over 2,000 of them within his parish – many descended from linen weavers and flax growers brought in to service an industry that no longer flourished in West Cork. He may have seen a venture like this as not only having the potential to enrich him but also as a way of providing a living for many of his indigent parishioners. 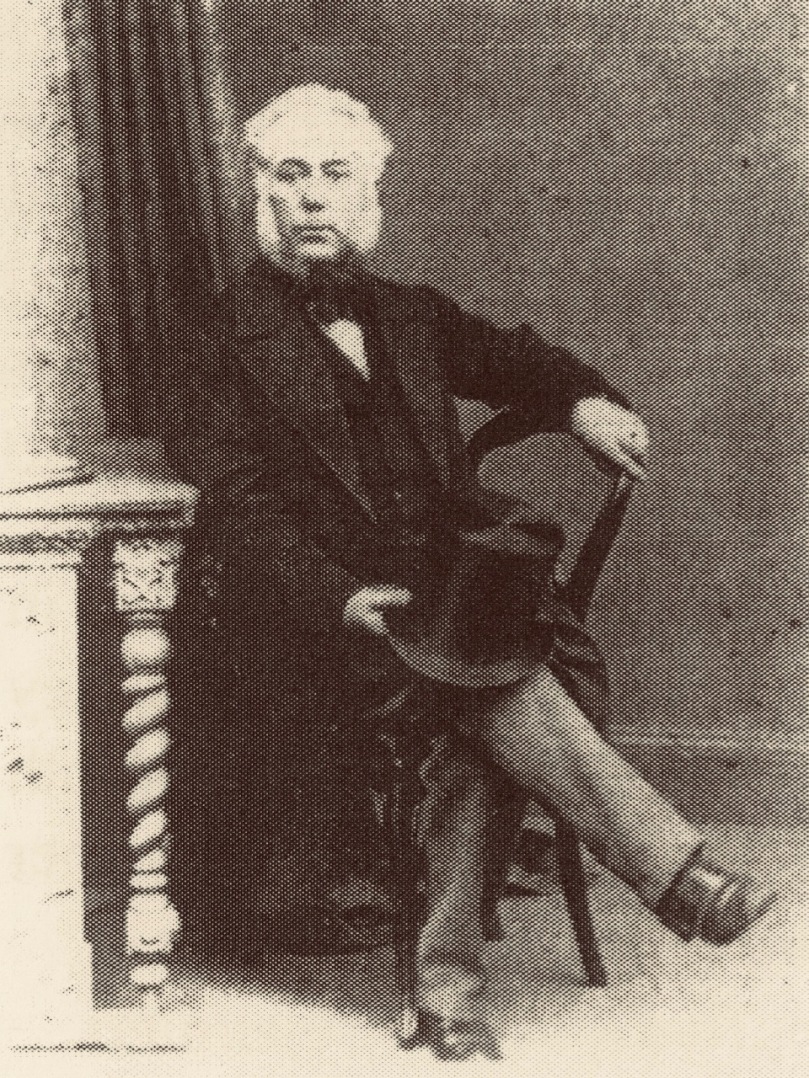 The mine revived in the 1850s under the management of yet another Thomas brother, Charles. For a while it seemed to be producing well, but letters flew back and forth (all faithfully recorded in Hodnett’s book) with accusations and counter-accusations of mismanagement and overspending on useless equipment. Things staggered on until 1863. As late as 1862 a report noted that gold had been found as well as copper and that there was on site a water wheel measuring 24 feet in diameter, and 4 feet wide, which was attached to stamps. There were dressing floors, a smith’s forge, a carpenter’s shop and a good residence for the agent, with 10 acres of ground for the mining work. 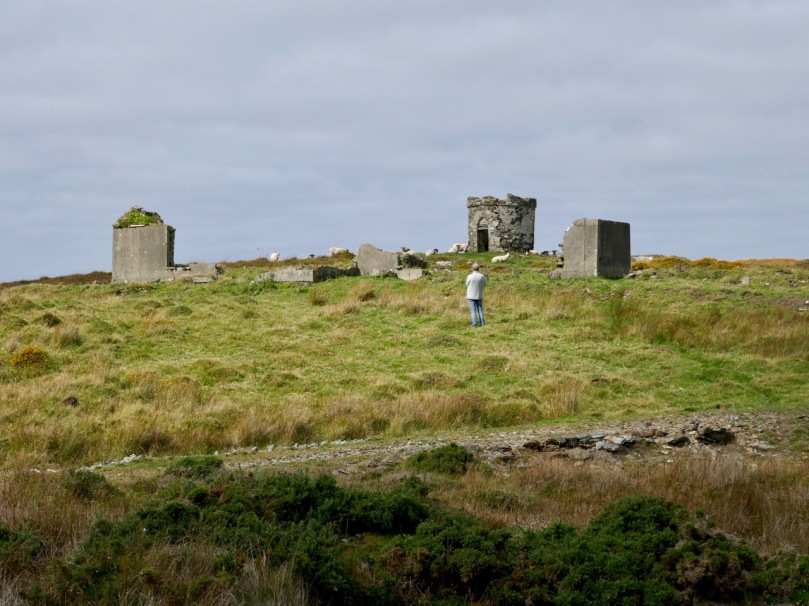 Upper: The ruins of a substantial house – perhaps the agent’s? Lower: The building remains in the foreground may date from the 1900-1906 phase

One final phase of mining came in 1900 and lasted until 1906. Some of the buildings may date from then, but there are no real records of the activity there during this period. Today, the place is home to a flock of placid sheep. If it was not for the abundant evidence of ruined buildings and cement-capped mine shafts it would be hard to imagine that such a remote, wild and beautiful place could have been the centre of a busy industrial complex.

Upper: one of the cement-capped shafts. Lower: The powder house

The most obvious structure is the round gunpowder magazine. Diane Hodnett reckons it was built to support the initial blasting of the lodes in the original adit, and that it bears a strong resemblance to the powder house at Crookhaven which dates from the 1830s. It was originally castellated, and is square inside, although round outside.

The waterwheel and stamps were powered by a quarried-out waterfall (above), which still provides a burbling backdrop to the walk down to the mine site. Partial walls of the stamp house still stand, covered with ivy. Pushing through the bracken to get to the waterfall was like entering an overgrown fairy glen. 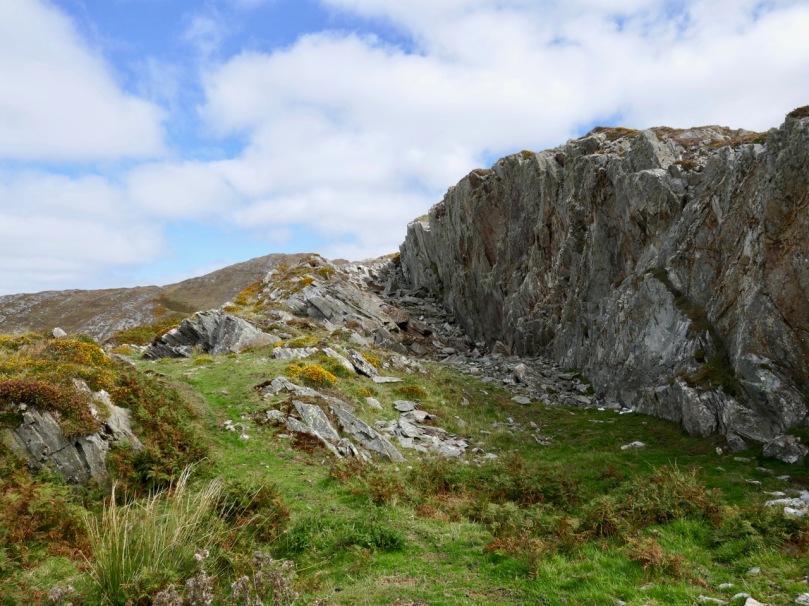 From there we wandered down to the main site and the powder house, and then to the opencast workings. I’m not quite sure which period this belongs to or what they were looking for in this working. The rock face is heavily grained with quartz but also now with lichen, after so many years.

The real surprise for us came when we walked east from the mine site, along the side of a valley running up from the sea. We hadn’t expected the ruggedness, the colour and the contours of what turned out to be a very special, and quite hidden, part of our Mizen Peninsula.

With astounding views across to the Sheep’s Head and beyond to the Beara, and west to the inaccessible Bird Island, this was a very rewarding discovery indeed.

Just when you think you’re getting to know this incredibly peninsula, the Mizen, it will throw up another hidden wonder!