We’re well into November, yet clear, dry days abound and we are drawn out into the lanes of West Cork. There are so many to choose from, and all are quiet, although we will always find someone to share a chat along the way. Yesterday we donned our boots and followed another of the Fastnet Trails – the Ilen River Loop. In fact, the boots were unnecessary as the whole route is on virtually deserted paved roads. If that sounds unexciting, let me tell you it isn’t: wherever you go in West Cork you won’t be short of sweeping green landscapes, broad views – mostly over mountain or water – and fragments of engrossing history jumping out to meet you.

We started at the Lisheen trail head and covered the 8 kilometers in a bit over two hours. This did include some dawdling and chatting: in Ireland the latter is unavoidable, and applies to everyone you meet. With us were friends Amanda and Peter, and you’ll find Peter’s Hikelines account of the expedition here: his watercolour illustrations can only be described as ‘exquisite’.

Look carefully (above) at the line of sea on the horizon: just visible is the unmistakeable silhouette of the Fastnet Lighthouse, justifying this route as a part of the Fastnet Trails network. It’s a wonderful asset for locals and visitors. You could simply drive along these routes, of course, but you just won’t get to see the details and appreciate the beauty. On foot you can pause at every turn and on every brow to properly take in the delectable countryside. And the network of trails is expanding – new routes are being developed at the west end of the Mizen: here’s another of Peter’s posts. 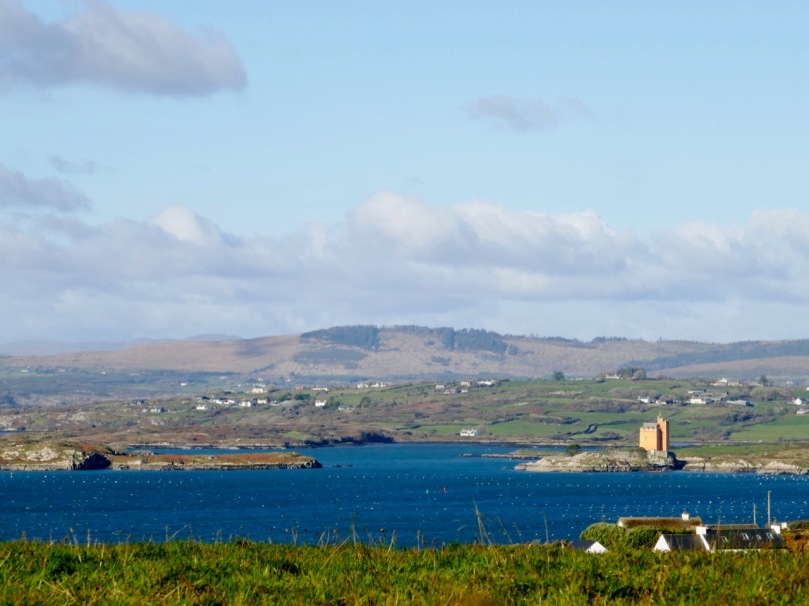 There are views to the north as well, looking into Ballydehob Bay which Jeremy Irons’ ochre coloured Kilcoe Castle dominates. Above the water can be seen the islands of Roaringwater Bay and the ridges of the Mizen and Sheep’s Head, and even the high peaks of the Beara Peninsula beyond. But we must focus on the subject of this trail, which is the broad estuary of the Ilen River as it winds inland, feeding into the woods and pastures of West Cork, narrowing but remaining tidal right up to Skibbereen: schooners used once to berth on the five quays serving that town. 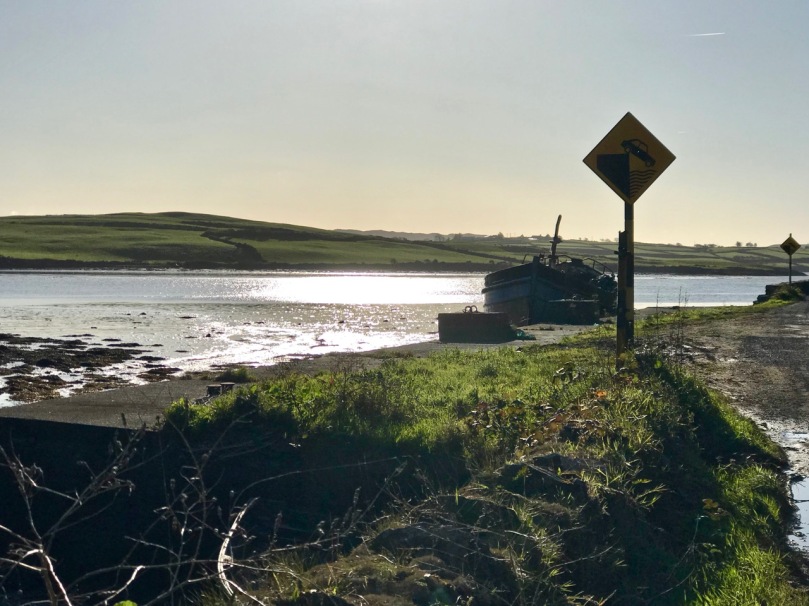 All along the coastline and river estuaries in West Cork are reminders of how important transport by water once was. Dozens of quays are still here, in good working order – there was a drive to revive and restore the more significant ones some years back. Also there are traces of more ancient ones which are slowly decaying into nature. All were put there to serve the isolated rural communities in the days when boreens were only narrow tracks, often impassable in the winter months. But on these western peninsulas no-one is more than a few miles from navigable water – and those quays were an invaluable asset. 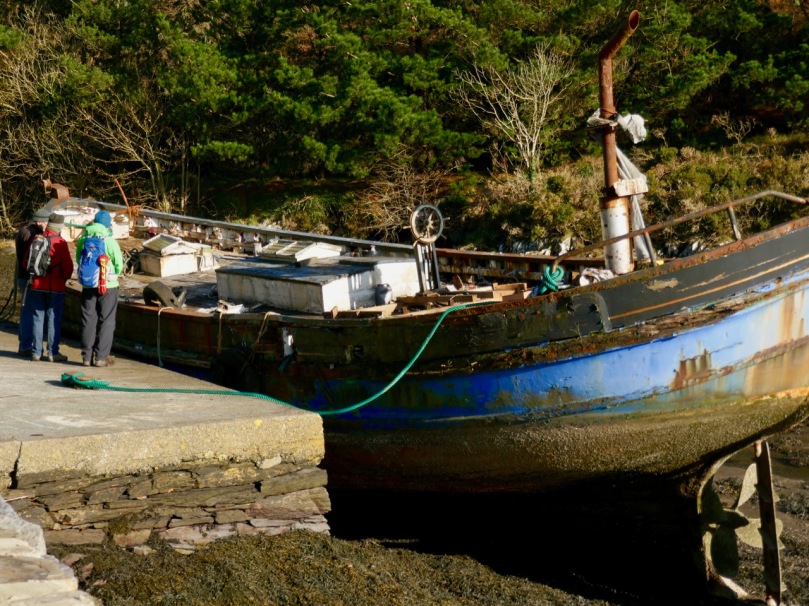 Our route passed right beside the Glebe Quay, where we came across the hull of an old fishing boat and – by chance – one of its former owners! Here we are, ‘at the chat’, above. This became a long ‘chat’ – as I was most intrigued to find out why this large vessel was sitting here in a deteriorating state – but we had to cut it short in the end as we were getting cold standing still! Our informant was Mike Williams, who Finola and I have met before: he lives on the shore of the Ilen River and has been involved in boats and boatbuilding for much of his life. He bought this former herring ring-netter some years ago with the intention of restoring her, but sold the vessel on to another enthusiast. The project did not succeed, however, and now the boat is on its way to the marine scrap yard – a sad but inevitable fate for many retired wooden craft.

I did a bit of internet delving and was pleased to turn up some historical information on this boat, which Mike told us was named Ribhinn Bhan. Ribhinn comes from the old Irish word rhigan meaning ‘maiden’, while bhan in Irish means ‘white’. This vessel started life with the name Ribhinn Donn – ‘brown-haired maiden’, and was built in Scotland by Nobles of Girvan in 1966. She was first registered in Scalpay Isle – Sgalpaigh na Hearadh in Gaelic, one of the Outer Hebrides, close to Harris – and carried the number SY 371. She was renamed in 1973 and reregistered as B23 in 1989. She arrived in Tarbert, Co Kerry, Ireland in 2004, and Mike bought her in 2006. I’m including these two not-so-good quality photos of Ribhinn Bhan, which I traced, for historical interest: the first is the vessel in Tarbert, and the second  follows her to West Cork; she is on the right, here, in the boatyard at Oldcourt, on the Ilen River, in 2007.

Moving on from the Ribhinn Bhan our path followed the line of the estuary, rising up to higher ground before turning back towards the trail head at Lisheen. There were many more sweeping views to be enjoyed, and the delight of being immersed in the simple ambience of rural life in West Cork, with all its unremarkable yet irresistibly attractive details. 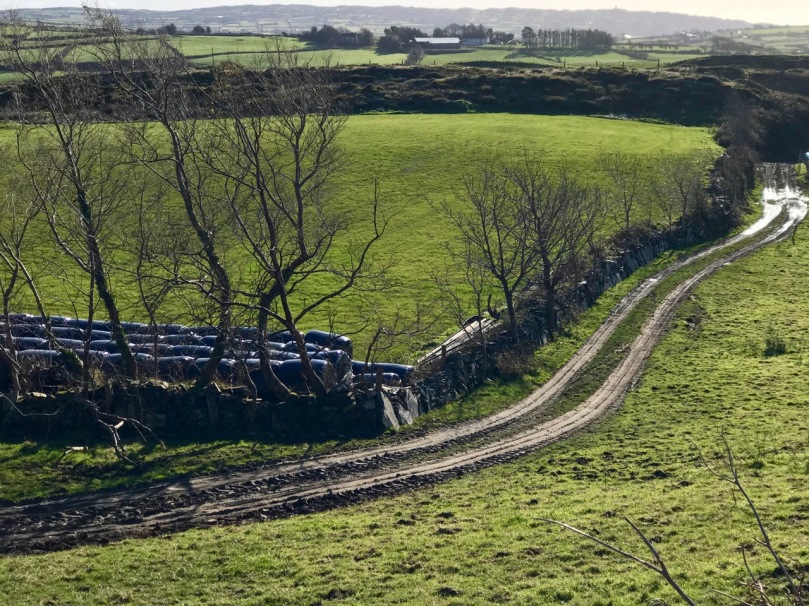 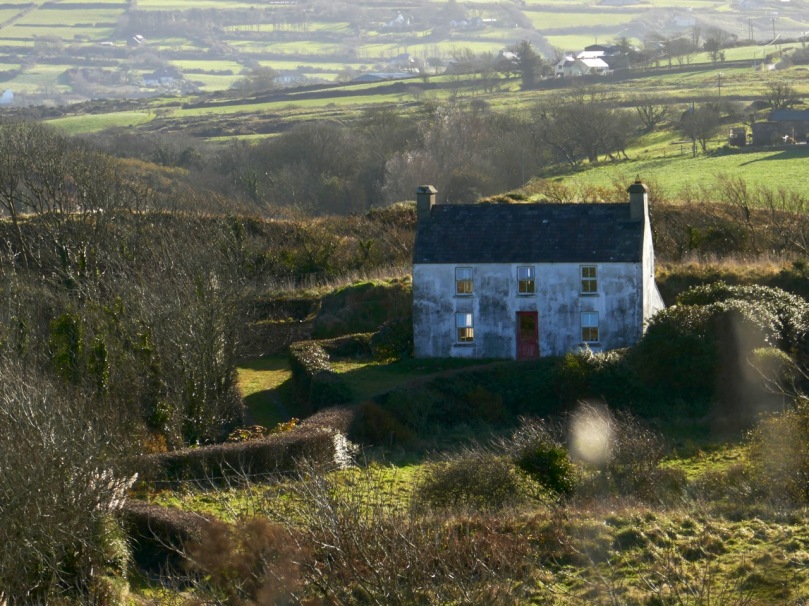 We passed the quite remote but still running Minihan’s Bar – an ideal refreshment point on summer evenings – but not open for us on this November afternoon. The also remote seeming Saint Comghall’s Church, built in 1832, marked the return to the trail head and the end of our walk. It was a most satisfying expedition on a remarkably golden late autumnal day. 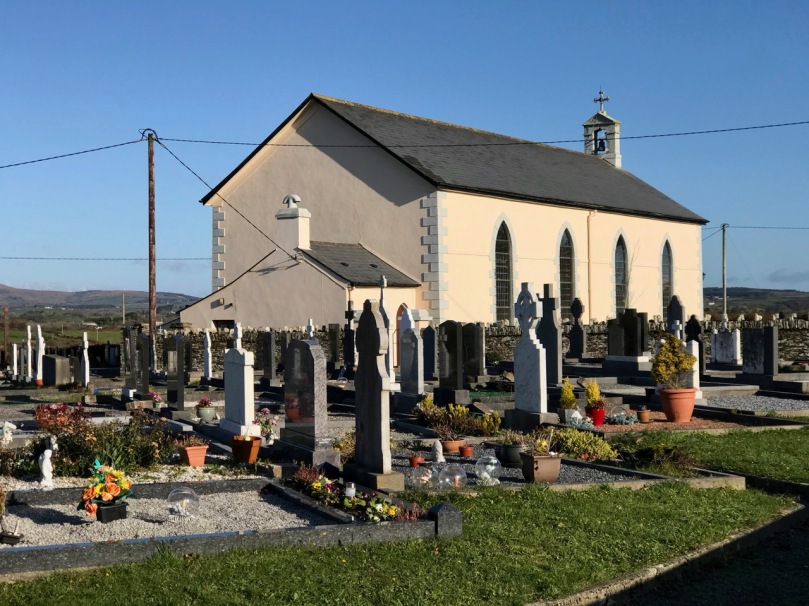 Up-to-date information on all the Fastnet Trails – including this one – can be found on this website. Our Roaringwater Journal has also written up a few more of them. Give them a try, if you haven’t already done so . . . Enjoy!