West Cork is home to a great concentration of prehistoric stone circles. While all of them share certain characteristics, there is a clear division between those containing only five stones and the multiples stone circles that contain seven or more, such as the Derreenataggart stone circle on the Beara, sketched by Peter Clarke, above. This post is about the multiple stone circles – I am leaving the five stone circles until next time. If you haven’t yet read The Stone Circles of West Cork: An Introduction, you might like to do that now before reading further.

Although we love getting out in the field and visiting ancient monuments, such as this stone circle at Maughnaclea, we have to confess that the sun doesn’t always shine

Although this post covers some of the same ground as the Introduction, my aim here is to concentrate on the larger circles and show you what they actually look like on the ground*. An online search for ‘West Cork Stone Circles’ will bring you to many pages of information about Drombeg but precious little else. Drombeg is a marvellous site and its excavation yielded much-needed information about stone circles, but it’s only one site – the one with the signposts and car park. 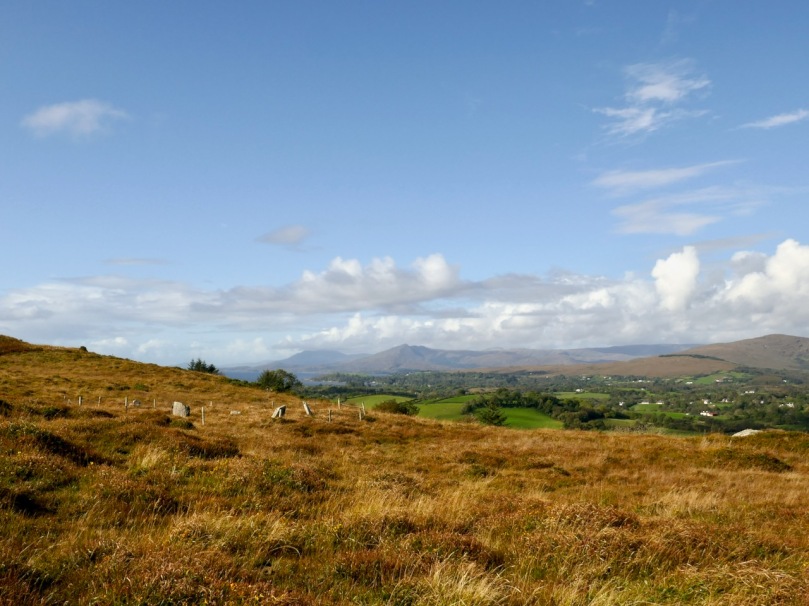 How about this one, for example, at Cappanaboule – it’s a bit of a hike and there’s no car park – but what a place!

Multiple stone circles in West Cork all fall under the heading of recumbent or axial circles, in which two portal stones (usually the tallest in the circle) stand opposite a recumbent and the line that passes through the portals and over the recumbent is considered to be the axis of the circles. However, within this predominant design, there are variations in how the builders decided to construct their circles.

A closer look at the Cappanaboule stone circle: ten of the original thirteen stones are still there and there’s a boulder burial in the middle

The most noticeable variation, of course, is the size of the circle and the number of stones it contains, from seven to an estimated nineteen. We don’t know why the builders made these choices, although as with most construction, size can be equated with wealth: building a stone circle was an arduous undertaking necessitating the ability to commandeer a significant labour force. Perhaps also a larger circle with more stones permitted finer gradations of alignments, if this was the purpose of the circle, or more expansive ceremonials within the boundary of the circle.

This is Gorteanish stone circle on the Sheep’s Head, only discovered in the 1990s when the Sheep’s Head Way trail was being cut. It’s hard to see what’s here because it’s so overgrown but it probably included 11 stones, four of which are still standing and two possible boulder burials, one inside and one outside the circle

The portals are normally the tallest stones in the circle but occasionally they are also set radially, or edge-on, to give the impression of a natural entrance.

This is one of the two stone circles in the townland of Knocks. It illustrates well the portal stones being radially set and being the tallest stones in the circle. In my photograph you are looking across the recumbent to the portals and in Peter’s sketch you are doing the opposite

In only three cases an extra pair of stones helps to emphasise the entry point by creating a short passage. One example of this is Carrigagrenane, which is also one of the largest circles at nineteen stones.

Carrigagrenane stone circle has double portals, creating a funnel or passage into the circle. This site is very overgrown and hard to locate so a lot of bracken-bashing was necessary to get this shot. Amanda is standing between the two outer portals

Conversely, the recumbent or axial stone is normally the lowest stone in the circle and the broadest (since it is set with its long axis parallel to the ground) but even here variation occurs. The axial stone at Ardgroom Outward, for example, is a pillar stone. Indeed, it can sometimes be difficult to decide where the axis line of the circle runs, if stones have fallen or are missing. 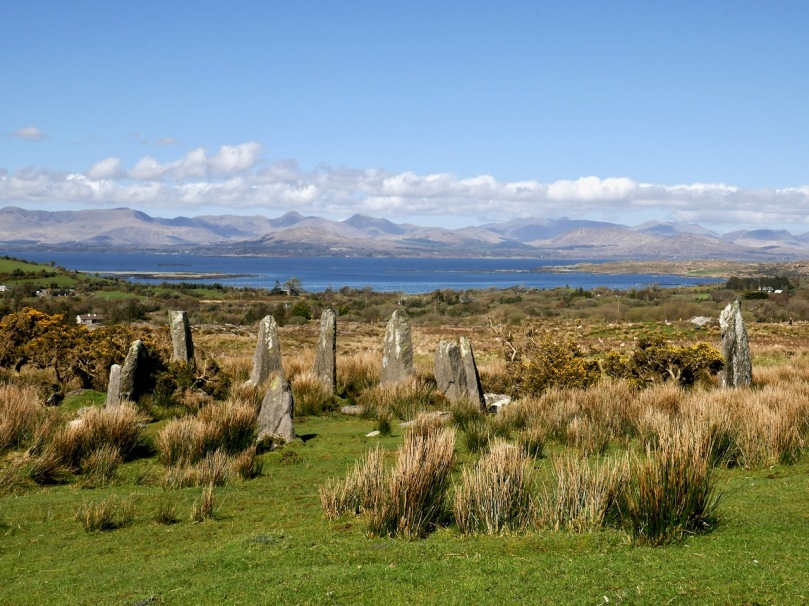 Ardgroom Outward stone circle, on the Beara is spectacularly sited. The axial stone, along with all the others in the circle, is a pillar stone rather than a recumbent. Note also the large monolith outside the circle to the right. The natural view-lines are to the north

Monoliths (single standing stones or blocks set on the ground) are present at some sites, either inside or outside the circle (as at Ardgroom Outward, above). Where they are inside they are placed off-centre. Where they are outside, they can be close to the circle or some way off but visible from it. These are usually called outliers.

This is the second stone circle in the townland of Knocks, the more southerly of the two. My photograph illustrates the line of sight over the recumbent, across a slightly off-centre monolith, to a radially set portal. Peter’s sketch illustrates the whole circle

Quartz is a stone of choice for some of these monoliths but it is interesting that quartz is never in use as a circle orthostat. 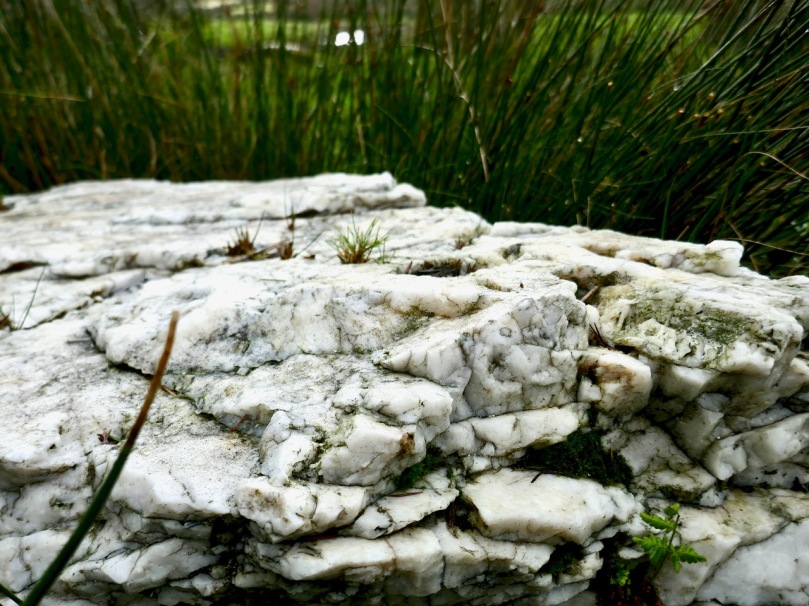 The stone circle at Maulatanvally includes a large quartz conglomerate block within the circle. I was struck by how it was gleaming on a dull day

Standing stone pairs can also function as outliers to a multiple stone circle. At Dunbeacon this outlier pair is almost half a kilometre from the circle across the valley, but each is clearly visible from the other. Originally a third standing stone also stood within 50 metres of the standing stone pair, but it has now disappeared. 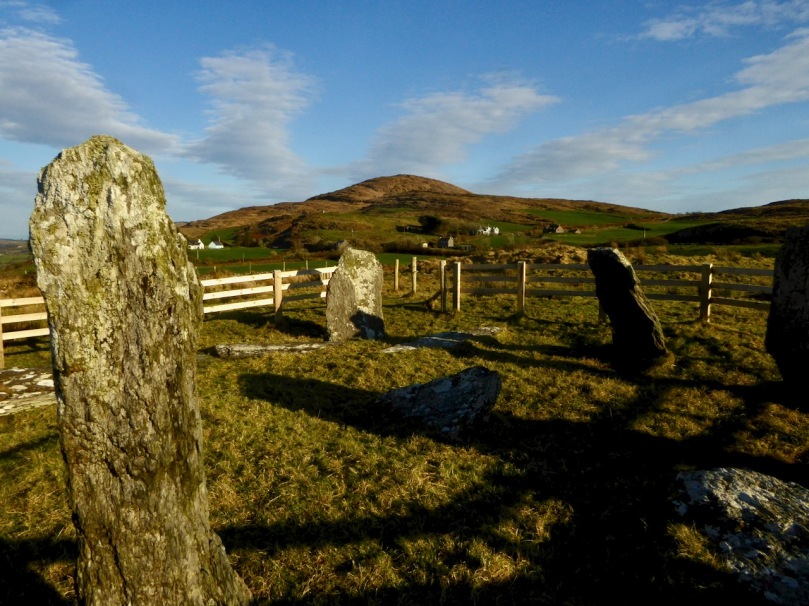 Dunbeacon stone circle, recently corralled inside a wooden fence. The natural view-line from this circle is to Mount Corrin to the east, rather than the south or west. The standing stone pair in Coolcoulaghta are located in front of the furthest house to the left in the photograph.

Another association is with boulder burials, sometimes found outside the circle, as in Bohonagh (see An Introduction) where the boulder burial capstone is quartz and contains cupmarks. At Ballyvacky (below) a boulder burial stands about 50 metres from the circle and a standing stone once stood beside it. 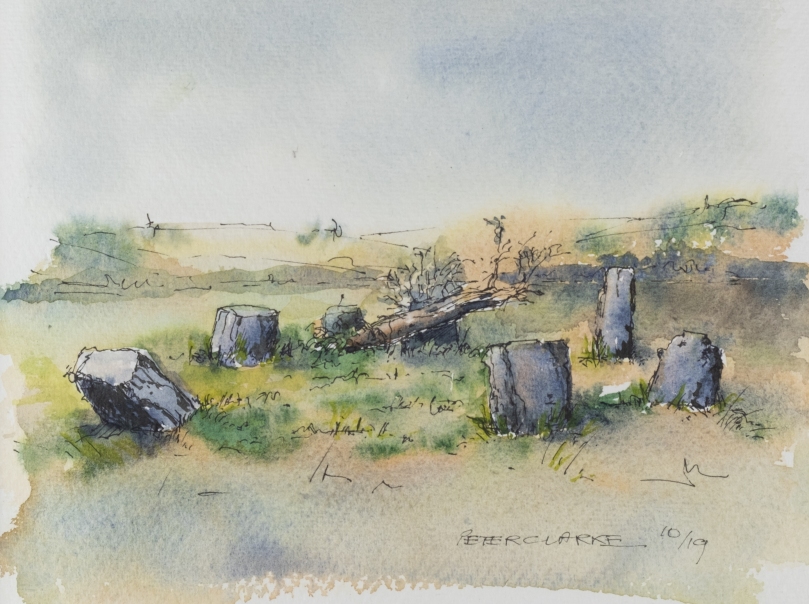 My photograph is taken from the Ballyvacky boulder burial, looking across to the stone circle. Peter’s sketch shows what is still standing – seven of the original nine stones. You can see that the remaining portal is radially set and that the recumbent is the largest stone in the circle

Boulder burials, as we have seen, are also found inside the circle: one of the most spectacular examples of this is at Breeny More (below) where a group of four boulder burial are set in a square within a large circle from which most of the stones are missing. 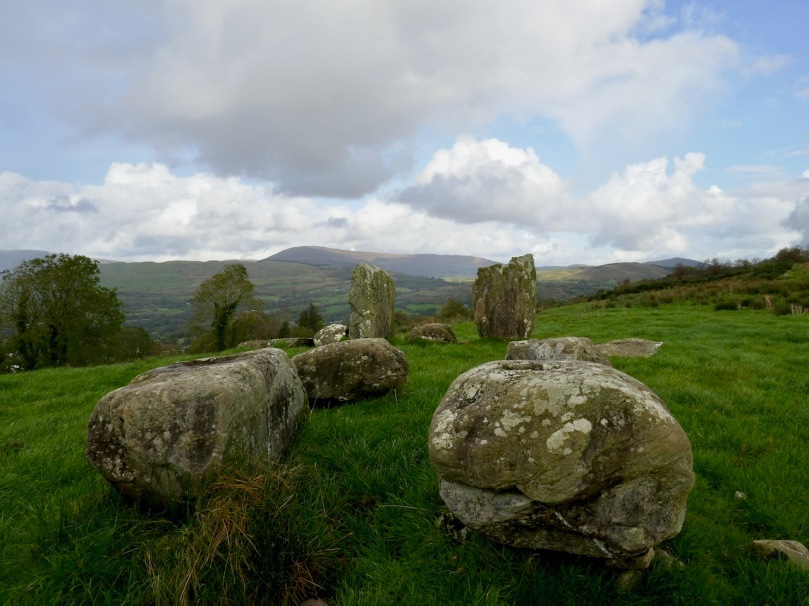 Finally, occasional stone circles will be surrounded by a fosse or shallow ditch. The most striking example is at Reenascreena, below.

Visiting stone circles, I am struck by features which appear to be similar at all or most of the sites. Many are situated on elevated sites with expansive views to the south and west. While this has been well documented by archaeologists, it’s one thing to read about it and yet another to visit several circles on one day and find yourself expecting a certain set of circumstances as you tune in to patterns in the sites themselves. What the orientation descriptions don’t mention, for example, is that the choice of location often features rising ground behind the circles which obscures the horizon to the north. 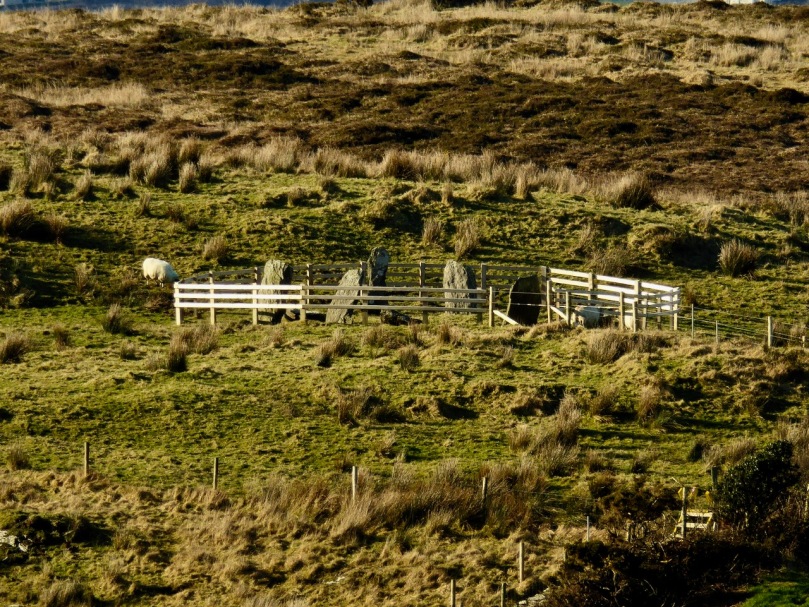 Occasionally the higher ground obscuring the horizon is not to the north at all, but to the south or south-west – confounding our expectations that the obvious view-lines will be to the south and west. Cappanaboule is strikingly situated thus, as is Ardgroom Outward. 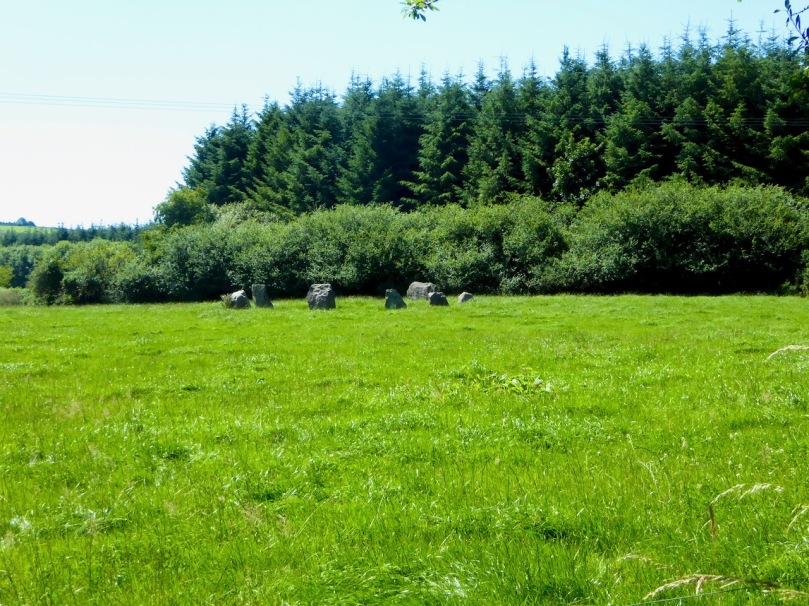 And then we have examples in fairly flat country with no really obvious view-lines. This can be complicated by surrounding forestry, as at Knockaneirk (above) where, if there was an obvious orientation over the recumbent it has long been hidden by tall tree.

Next time I will write about the five stone circles – there are as many of them as there are the multiple stone circles and while they share most of the same features they have their own special character.

*Most of these photographs (like the one of Breeny More, above) were taken last year or in previous year, and many of them in the company of Amanda (Holy Wells of Cork and Kerry) and Peter (Hikelines) Clarke. I am indebted to Peter for the sketches. Not being able to get out into the field to visit and photograph more circles has been frustrated this year by Covid19 travel restrictions, so I have decided to go ahead and use what I have, rather than wait to add to my collection.