A personal perspective – by Robert – to celebrate St Cecilia, the Patron Saint of music, on her day: 22nd November 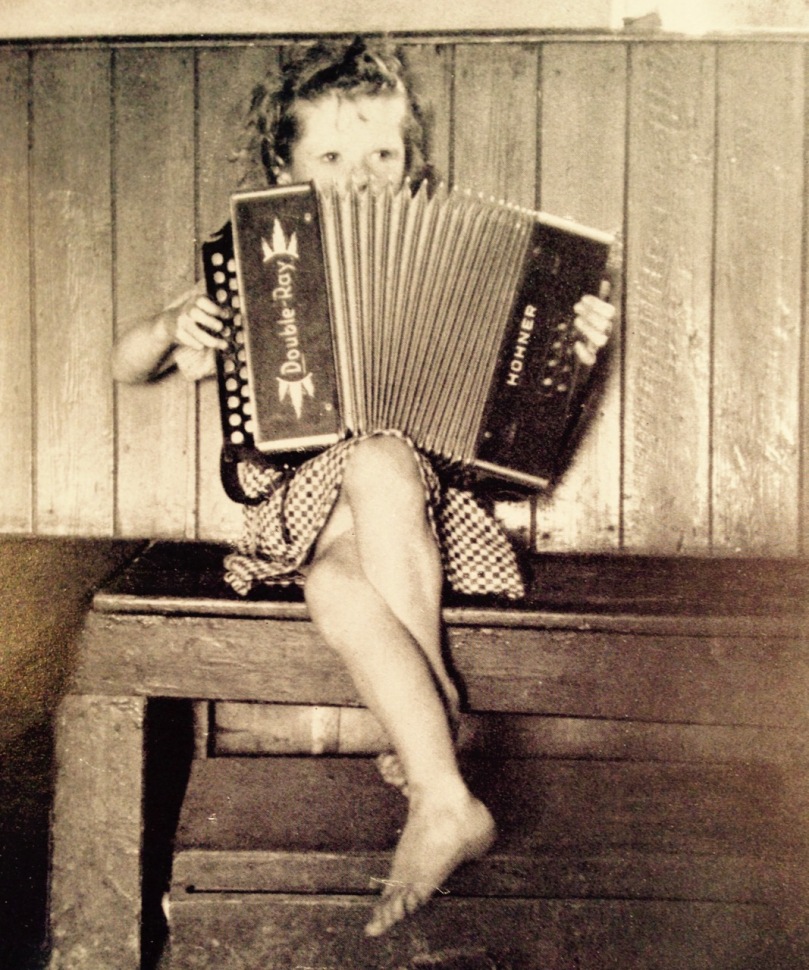 …My father played the melodeon
Outside at our gate;
There were stars in the morning east
And they danced to his music.

Across the wild bogs his melodeon called
To Lennons and Callans.
As I pulled on my trousers in a hurry
I knew some strange thing had happened.

Outside the cow‑house my mother
Made the music of milking;
The light of her stable‑lamp was a star
And the frost of Bethlehem made it twinkle.

A water‑hen screeched in the bog,
Mass‑going feet
Crunched the wafer‑ice on the pot‑holes,
Somebody wistfully twisted the bellows wheel.

My child poet picked out the letters
On the grey stone,
In silver the wonder of a Christmas townland,
The winking glitter of a frosty dawn.

Cassiopeia was over
Cassidy’s hanging hill,
I looked and three whin bushes rode across
The horizon — The Three Wise Kings.

An old man passing said:
“Can’t he make it talk” —
The melodeon. I hid in the doorway
And tightened the belt of my box‑pleated coat.

I nicked six nicks on the door’post
With my penknife’s big blade—
There was a little one for cutting tobacco,
And I was six Christmases of age.

My father played the melodeon,
My mother milked the cows,
And I had a prayer like a white rose pinned
On the Virgin Mary’s blouse.

from A Childhood Christmas by Patrick Kavanagh 1943; the photo of the girl is from the collection of Tomás Ó Muircheartaigh, who documented life in rural Ireland between the 1930s and the 1950s 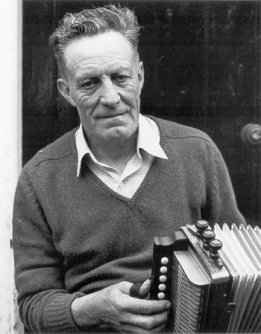 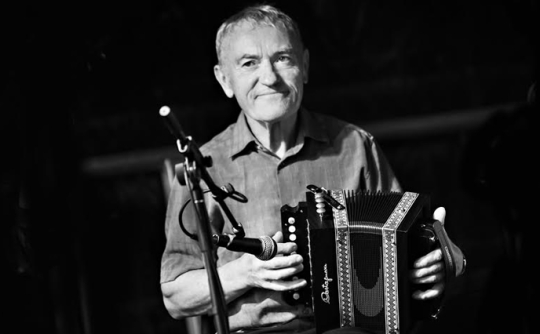 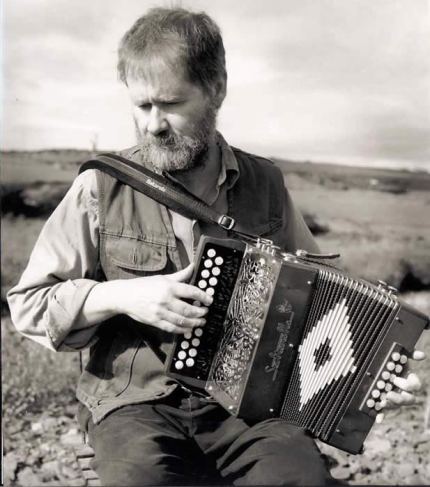 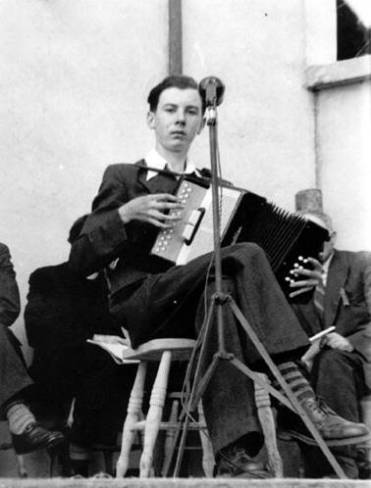 I have been playing the melodeon for well over 50 years: I should be a lot better at it than I am… My father didn’t play it: I didn’t even know that melodeons existed until I saw a secondhand one on sale in my local music shop when I was a teenager. I was fascinated by the look of it – it beckoned me; it was ten pounds, and in those days I earned seven shillings and sixpence a week from my paper round. Eventually I had saved enough to buy it, took it home and scratched my head over it. 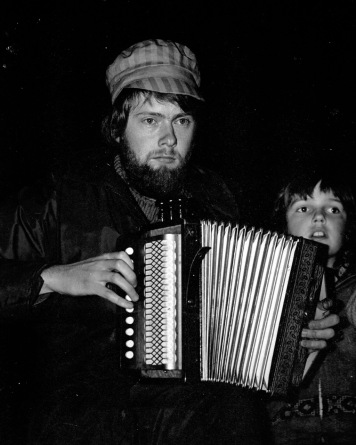 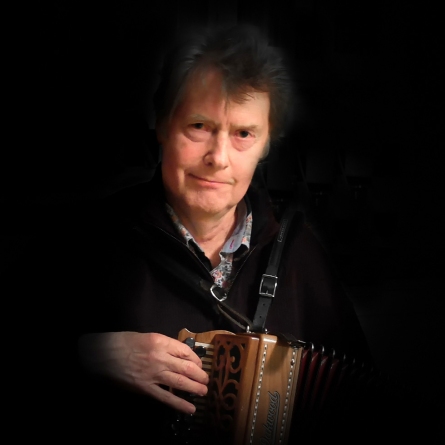 Spot the difference: Robert then (playing a one-row melodeon) and now (playing a two-row button accordion – photo by Peter Clarke)

There’s a logic to playing a melodeon, but it’s not an immediately obvious one. Perhaps I’d better explain that a melodeon is one sort of accordion, and the definition varies depending what country you are in. I was in England then, and the term ‘melodeon’ there covers pretty well everything that has a button keyboard, bellows, and produces different notes when you move the bellows in or out; it doesn’t refer to a ‘piano accordion’ where the keyboard has – well – piano keys, and the movement of the bellows in either direction doesn’t make any difference to the notes. 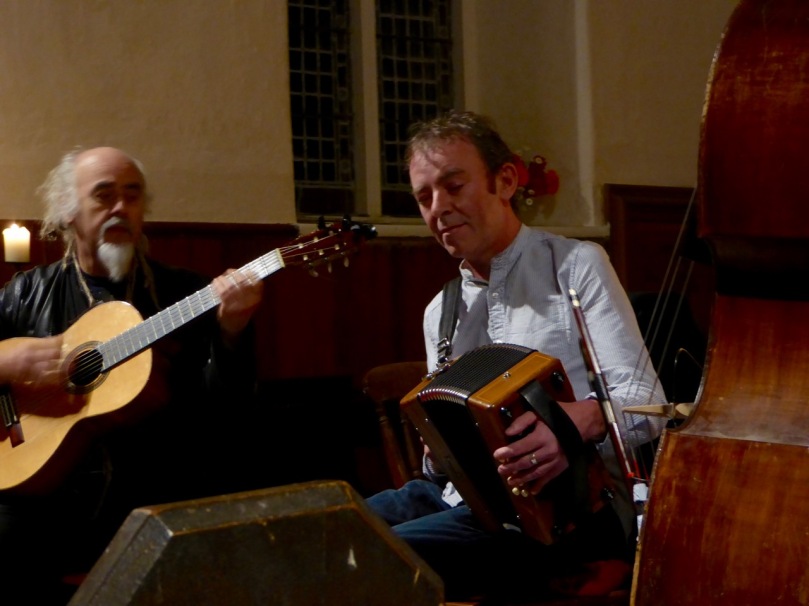 Now I am in Ireland and the term ‘melodeon’ only refers to an instrument with a single row of buttons on the keyboard; anything with more than one row is known as a ‘diatonic button accordion’, and you will probably most often come across the latter when listening to traditional music here, although nothing is ever simple, and there are a number of Irish players (including many really good ones) who play instruments with a single row of buttons. 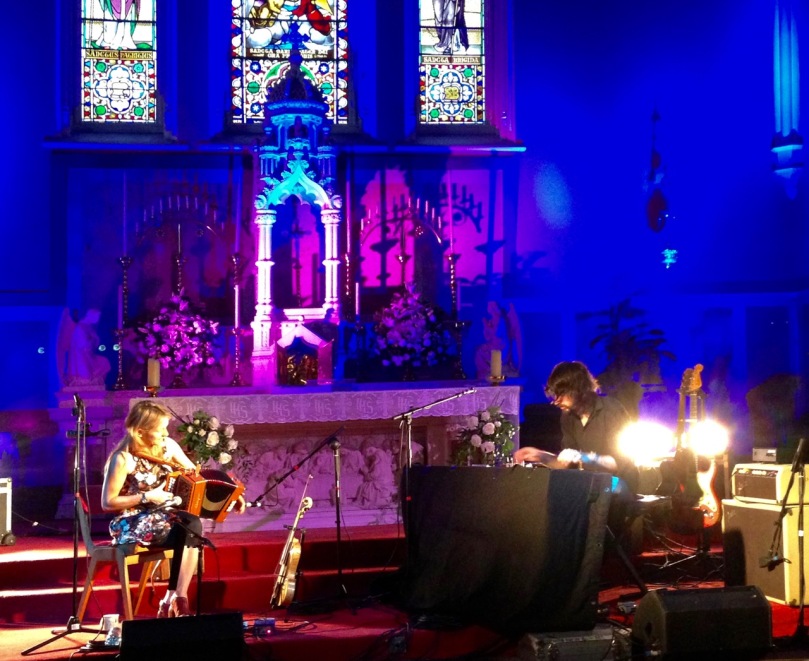 By chance, that first instrument that I saved up for had only one row, so it would be a ‘melodeon’ in both England and Ireland. I now tend to play mainly instruments with two rows, and I can’t stop calling them ‘melodeons’ even though that’s incongruous to players here. 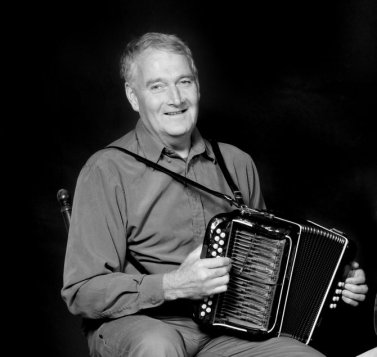 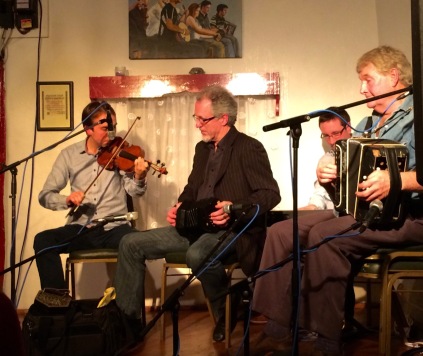 In an earlier post – The Clare Trumpet – I talked about concertinas, and the invention of those instruments by Charles Wheatstone in England, getting on for two hundred years ago. He took out a patent in 1829. In the same year Cyrill Demian – an Armenian organ and piano maker – filed a patent in Vienna for an ‘accordion’ which was exactly the same as today’s melodeon:

…In a box 7 to 9 inches long, 3½ inches wide and 2 inches high, feathers of metal plates are fixed… with bellows… even an amateur of music can play the loveliest and most moving chords of 3, 4 and 5 voices with very little practice… Each claves or key of this instrument allows two different chords to be heard, as many keys are fixed to it, double as many chords can be heard, pulling the bellows a key gives one chord, while pushing the bellows gives the same key a second chord…  many well known arias, melodies and marches, etc. may be performed similar to the harmony of 3, 4 and 5 voices, with satisfaction of all anticipations of delicacy and vastly amazing comfort in increasing and decreasing sound volume… it is easy and comfortable to carry and should be a welcome invention for travellers and parties visiting individuals of both sexes, especially as it can be played without the help of anybody… 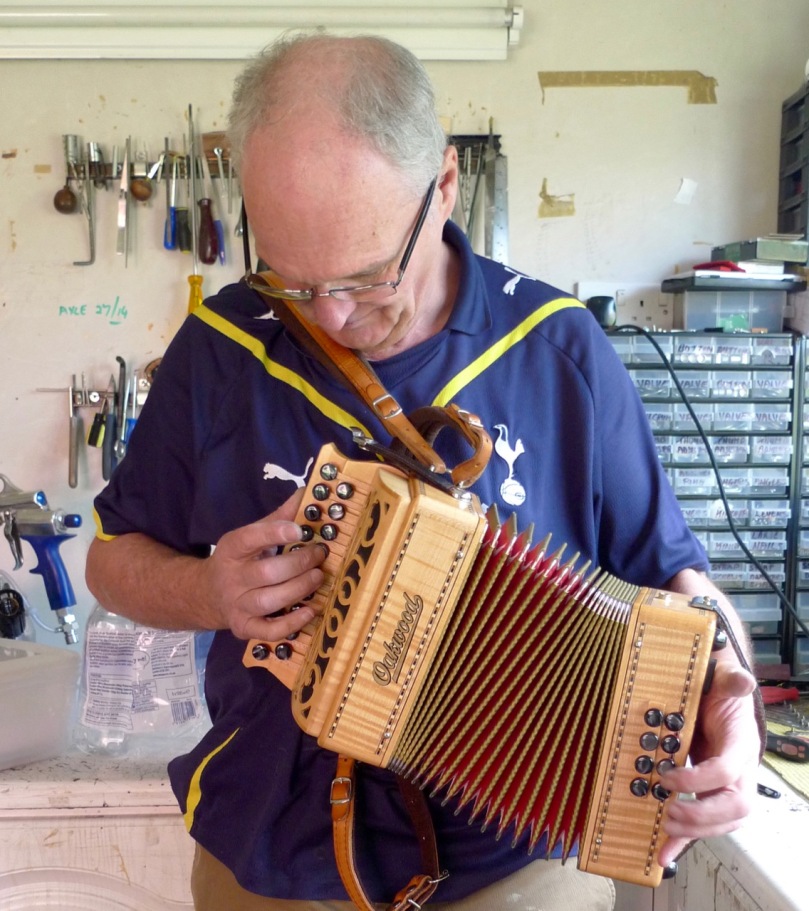 That’s true: the ‘squeeze box’ is one of those instruments which you have to learn to play just by doing it. Of course, you can get books of instructions – and you can get experienced players to help you get started – but in the end it comes down to instinct – and a lot of practice, preferably out of earshot of anyone else. You can pick up the diatonic system inexpensively by picking out tunes on a mouth-organ – which is a melodeon without the buttons or bellows! 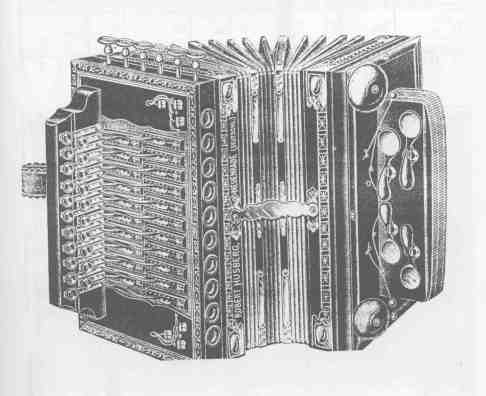 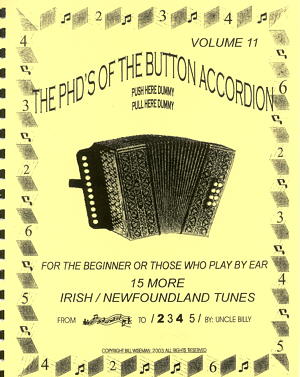 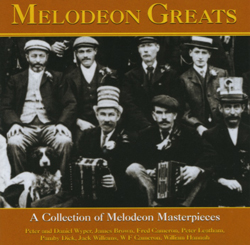 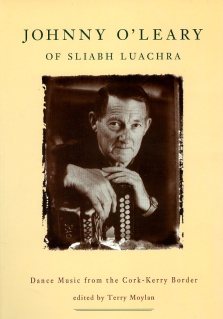 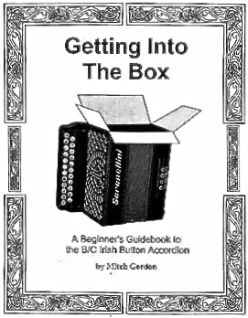 Concertinas / melodeons / button and piano accordions are different instruments but all share certain characteristics including the means of producing a note through a vibrating ‘free reed’ – a small metal leaf held at one end in a frame. A bellows pushes or pulls air through the frame and the reed vibrates, producing a musical note. The size and weight of the frame and leaf governs the pitch of the note. The quality of metal used for the vibrating reed – its density, flexibility  and tempering – determines the overall sound quality of the instrument. The best instruments use hand made reeds. 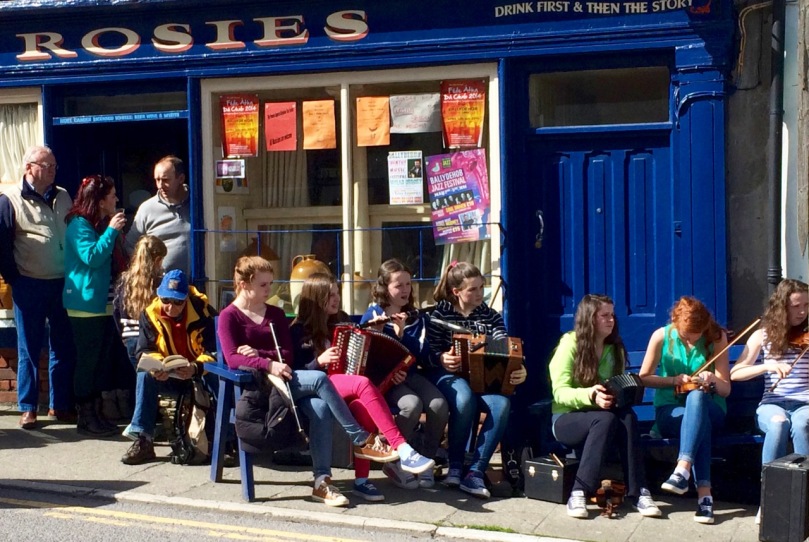 Squeeze boxes in evidence in this recital from young members of Comhaltas Ceoltóirí Éireann outside Rosie’s, Ballydehob, during the Trad Festival

Enough of the technicalities! What matters is the music that can be got out of an instrument. I like the push-pull (bisonoric) squeeze boxes because you have to move the bellows so much to get the changing notes. This adds dynamics to the music: movement and rhythm. As so much of traditional music is used for dancing, this is a definite advantage – there is already ‘dancing’ in the music itself. 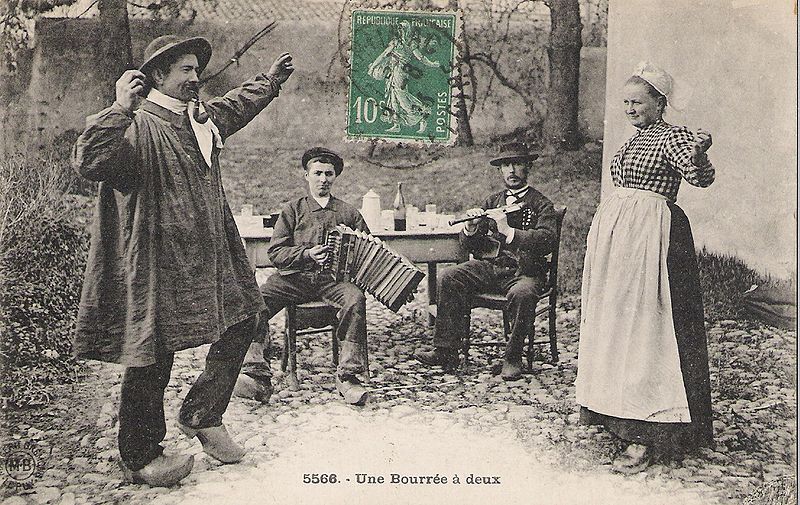 There are so many really good traditional music players in Ireland: you will know that because of our reports on the festivals we go to. Who are the best players today of melodeons and diatonic accordions? You have to decide that yourself by going out and listening to as many as you can. Or, second best, you can stay at home and use the internet – Youtube is a seemingly endless resource. There’s also The Session, which is a very good site for finding tunes and discussions on music and musicians. I also recommend ITMA – the Irish Traditional Music Archive – an invaluable free resource of information including thousands of sound recordings, videos, images and manuscript collections all related to the music tradition here in Ireland. 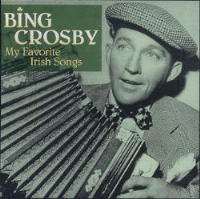 If you’re twisting my arm as to who are my melodeon ‘heroes’, I’ll reel off a list of players I would (and do) go out of my way to listen to: Johnny Connolly, Bobby Gardiner, Jackie Daly, Joe Burke, Seamus Begley, Dermot Byrne, Sharon Shannon… However, I seldom have to go far because they all seem to come, sooner or later (and often frequently) to our little corner of the world here in West Cork. 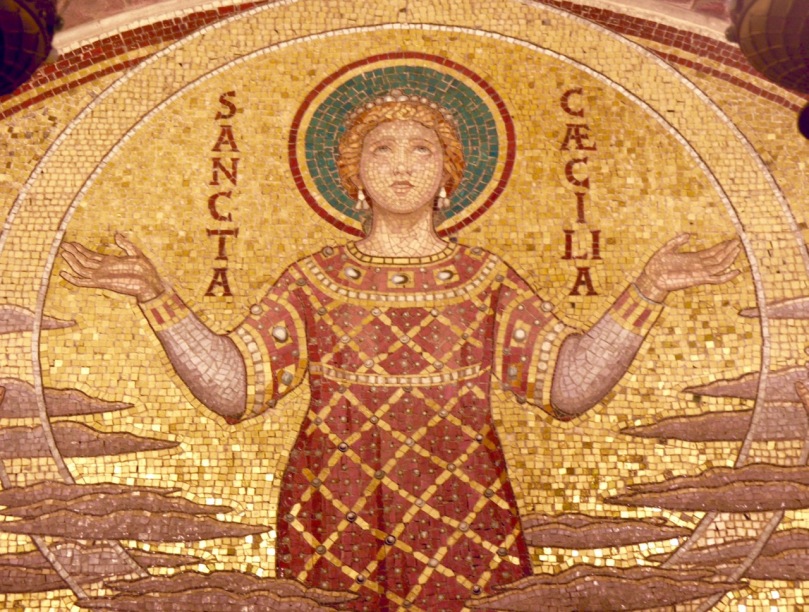