As we often do, we set out on a sparkling day last month to explore a part of the Mizen we aren’t familiar enough with yet. Our plan consisted of pouring over the OS Number 88 map and having an AHA! moment of realising that we haven’t been to a particular spot. This time, the dart landed on an area just northeast of Dunmanus Castle (seen above from Mount Gabriel), where it looked like there was a trail running along the water that would afford magnificent views of Dunmanus Bay and the Sheep’s Head. Things didn’t go quite as planned. . . 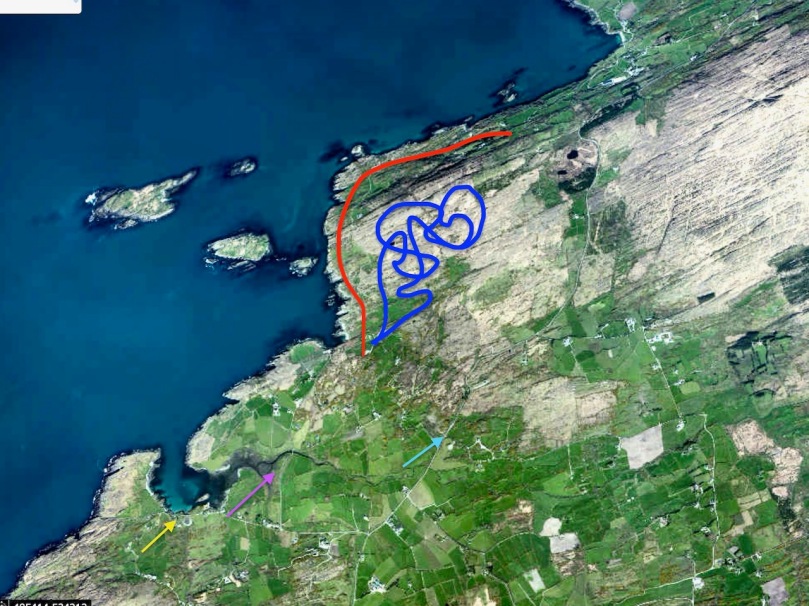 We’ve written about this area before – specifically, in Mizen Magic 13 Robert described the promontory immediately to the northwest of the castle, with its ancient stone walls and its spectacular sea arches. This area has recently been re-fenced and isn’t as easy to access as it was.

The Castle and bridge from the promontory

The Castle, of course, is the most prominent landmark in this area. Built by the O’Mahony’s in the 15th century, it is a classic early ‘raised entry’ type of tower house, with complicated internal architecture that allows restricted access to different parts of the building at different levels – including to an oubliette. My post When is a Castle..? has a good description of these kinds of castles, typical of West Cork.

But today we were heading away from the Castle, towards the townland of Knockeens, where, on the map, we could see this promising trail. But you can’t just go right there – a little meandering is always in order when you’re in countryside this beautiful and this interesting.

So we stopped to admire the Dunmanus boulder burial (it’s the rock in the lower left of the photograph above). Boulder burials are Bronze Age monuments, although they may have been used for purposes other than to mark burials. See my post Boulder Burials: a Misnamed Monument? for more about this intriguing group of archaeological sites, more widespread in West Cork than other parts of the country, and often associated with stone circles or standing stones. This one is unusual in that it is low-lying (most are in more commanding positions) and the base gets covered at high tides.

Crossing over an unnamed stream that rises on Mount Gabriel and empties into the sea here, we arrive at the point where we can leave the car and proceed on foot.

A short walk up an old boreen leads us to a clachán – a tiny settlement of houses, now all in ruins. The residents had magnificent views back down to the bay in their day, but as people say around here, you can’t eat scenery and the families who lived here are long gone to a better life elsewhere.

Just beyond the clachán we ran into our roadblock – an enormous puddle extended over the path. It was too deep to walk through and the boreen was fringed with thick gorse bushes we couldn’t push past. Stymied, we decided to climb up above the path and look for a way around. Easier said than done – between stands of gorse, boggy patches to go around (or sink into), sheep paths that went nowhere, we spent an hour or so wandering around the hillside and finally admitted defeat.

It wasn’t wasted time though – it was wonderful to be out in the crisp air, surrounded by all the magnificence of the Mizen, thinking about the generations who had wrested a subsistence out of that unpromising land. When we finally got back to the car we decided to see if we could approach the trail from the other side, and set off in that direction. 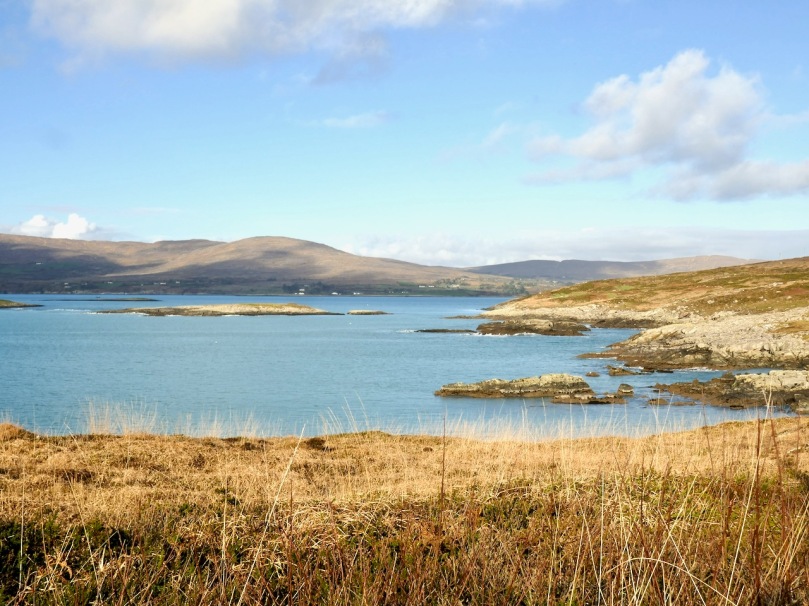 Looking across to the Sheep’s Head

Along the way we had a quick stop at the ruined late-medieval Kilheangul Church (Church of the Angels). It’s a special little spot that deserves a post of its own someday, so I won’t say much about it now. This photograph of it was taken in the summer.

By the time we arrived at the other end of the trail, beside a small pier, it was starting to get dark, as befits a January afternoon, so discretion dictated that we leave the rest of the adventure to another day.

The day started out to be about walking the trail – it ended up being about everything around it. That’s the thing about the Mizen – the journey is the destination.