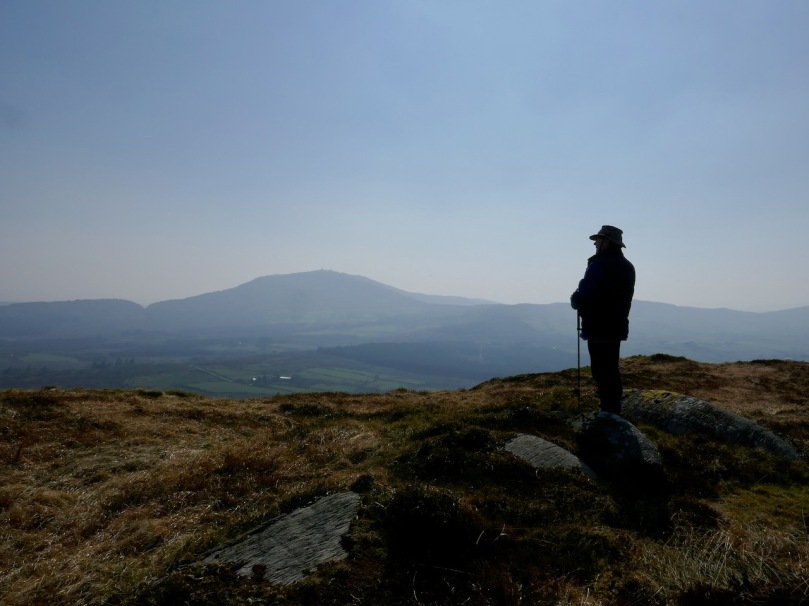 The world is in trouble – but in our tiny corner of it we find ourselves taking the time to get out into the open air, lapping up any chance of sunlight, and bracing ourselves against the bitter east winds that seem to prevail at the moment. Following last week’s escapades, when we discovered new territory just beyond the boundaries of the Mizen, we decided to take up the challenge of one of the most significant Mizen peaks – Mount Corrin. 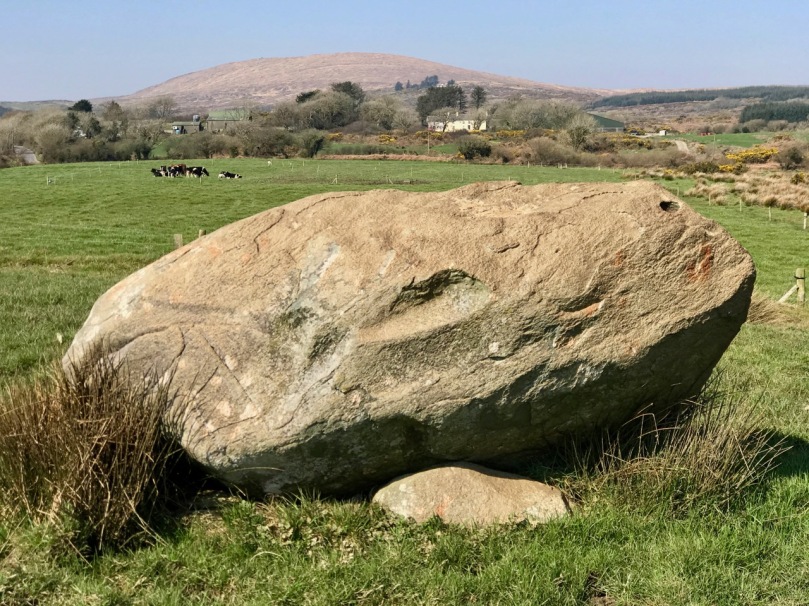 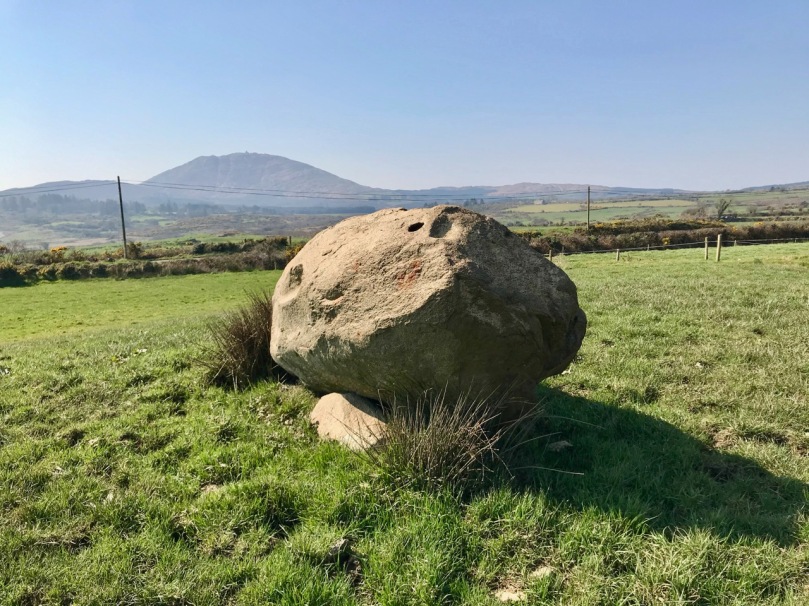 Upper – the elevated boulder burial at Rathruane – probably Bronze Age – seems to echo the profile of Mount Corrin – a perfect peak – away to the west, while – lower – the same monument also stands in context with Mizen’s highest mountain – Gabriel – to the south

We have passed the spring equinox, and days are now longer than nights. It’s a good time to consider seriously exploring the high ridges again. Corrin – 284 metres – is not the highest summit on the Mizen, but its profile is one of the most distinctive as it rises from lower ground on all sides – a ‘proper’ mountain! in this respect it is  surpassed only by the Mizen giant – Mount Gabriel. We’ll tackle that one later on. We notice that Gabriel is always visible to us, from whatever elevated ground we traverse.

Last time we tackled Letterlicky, which is at the furthest edge of the eastern Mizen Ridge: today’s summit is on the west side of the same ridge  We have, of course, been to the top of Corrin before: Finola’s post of October 2015 describes previous expeditions. Then, the light was magnificent and the skies were clear blue – such a contrast to the beginning of this week, when the landscape has been pallid – all washed-out browns and yellows: spring  still hiding its face in West Cork.

Upper – approaching Corrin on a challenging day. Lower – on the ascent, good distant views can be got to Ballydehob Bay, in spite of poor weather

We were the only souls on the mountain: it’s a good way of being self-isolated. But any walk in a natural environment in these strange times is exhilarating. In fact, we made two journeys to Corrin in the week: the first had to be abandoned in haste when halfway up due to waterlogged footwear and a biting cold easterly. 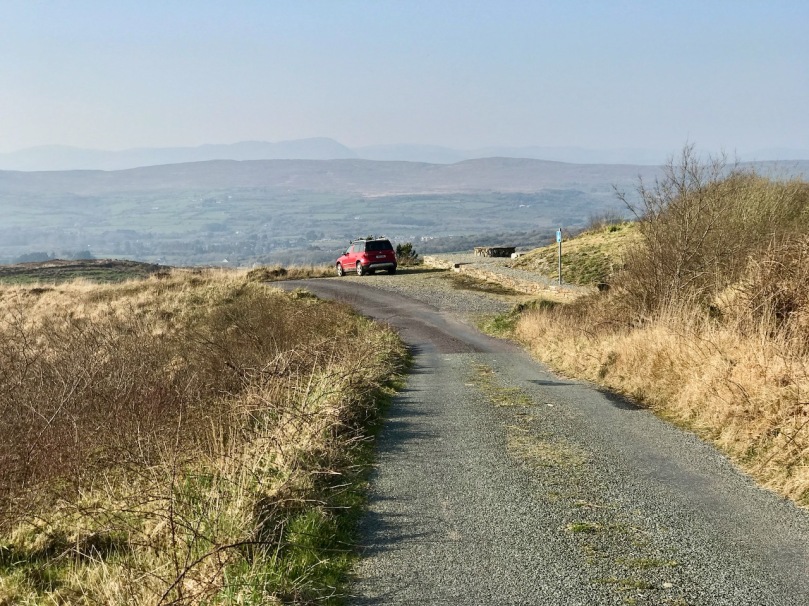 Upper – on our first attempt on Corrin we got as far as this wilderness before turning back. Centre – park here for the Corrin trail! It’s well marked and accessible from the east side. Lower – a convenient seat for donning the right footwear! This is on our second attempt, in much improved conditions

Suddenly – on Friday – everything changed. Out of nowhere came a bright, clear and windless day. We hurried out to complete our journey to the summit, revelling in the light. It was as though, for the first time in the year, there was a sense of expectant renewal. When we arrived home, it was to discover that Ireland had been plunged into lockdown: we (the ‘elderly and vulnerable’) have to stay in our homes unless needs are urgent (food and medicine) although we are permitted to exercise close to home, always keeping a safe distance from others. 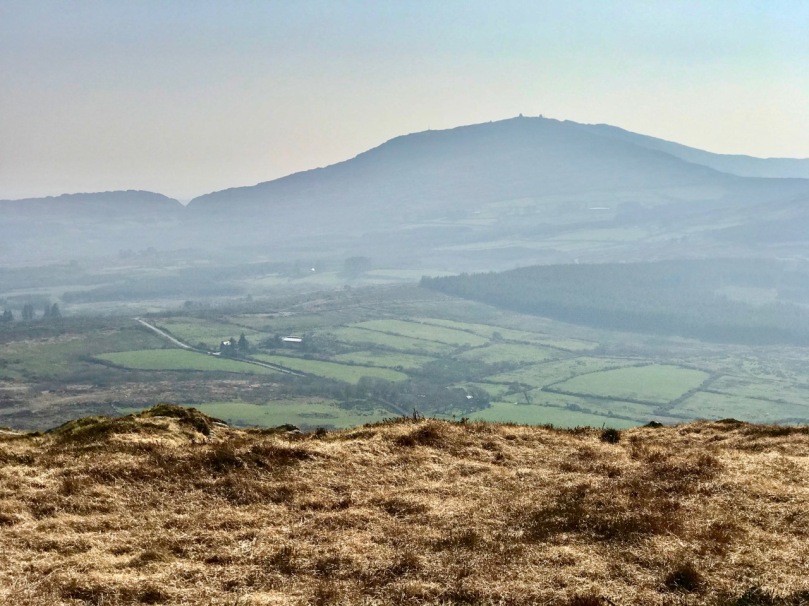 Upper – Finola looks back along the ridge towards our previous goals (Lisheennacreagh and Letterlicky). Centre – spectacular views of Gabriel and the Barnaclleeve Gap are had from Corrin. Lower – the track is well marked: we are approaching the summit cairn

There is history on this mountain. The summit is crowned by a significant cairn. If the peak is named from the cairn – which seems likely (West Cork folk would pronounce ‘cairn’ corrin), it must have had ancient roots going back through many generations. The National Monuments Record makes brief mention of it: Class: Cairn – unclassified – Townland: Coolcoulaghta, Derreennalomane – On top of  Mount Corrin, commanding view. Sub-circular cairn (H 0.7m; 13.6m E-W; 15m N-S); modern cairn built in centre (H 2.7m; circ. 10.9m). On the way up from the east side, the path passes directly over some large prostrate slabs which look very much like a broken wedge tomb. The NMR says only this: Megalithic structure. There are also, near the summit, three substantial stones in an alignment. The NMR is silent on these.

Upper and centre – a possible broken wedge tomb on the slopes of the mountain. Lower – a convincing three-stone alignment which doesn’t get a mention in the Scheduled Monuments Record

Duchas has a far more exciting mention of Mount Corrin, with this ‘True Old Story’ recorded in 1936 from Dreenlomane School:

. . . About eighty years ago where there was no talk of anyone being able to fly there lived in Screathan Uí Laoghaire [Scrathanleary] a very clever man named Julian Camier. He had a house built, and quarried slate on the other side of Cnoc an Chairn at a place called Leaca Dhubh, and then he made a pair of wings. He told all the people that he would fly if each one of them brought a couple of slates home for him. When the day came crowds of people ascended on Mount Corrin to see him fly. He went on top of a high cliff and put on his wings but they failed to work when he spread them out and he jumped into the air and he fell off the cliff and hurt his leg. All the people took pity on him and each one brought a couple of slates down to his house so he got the slate brought home easy, and after that he was known as “Fly away Julian” . . .

It is said that there is a chieftain buried under a heap of stones in Mount Corrin and there are other chieftains buried in Coolcoulachta . . .  There is a cairn on the top of ‘Corrin’ hill and it is said that a giant Mc Gun and his horse were buried there . . .

Upper – view from Corrin’s summit across the Sheeps Head Peninsula. Lower – descending from the peak

It would be wonderful to think that folk tales about ancient burials on the mountain top is a memory carried down through countless generations. Clearly this Mizen summit holds histories and mysteries. but, regardless of any lore that we might find in our researches, it’s one of the finest walks that you can take in this part of West Cork, with rewarding views over the whole peninsula. 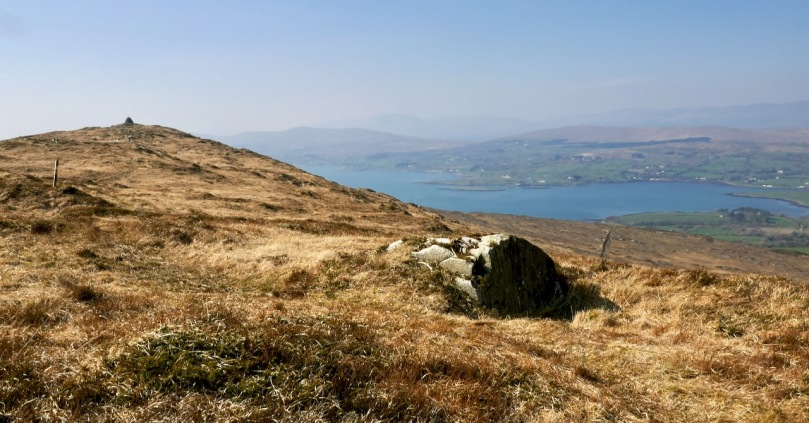