Ireland: ‘land of Saints and Scholars’ – and poetry, as we found on our travels. In just a few days we have discovered how three pre-eminent Irish poets – whose passing has spanned a century – are being celebrated and commemorated in their own townlands. 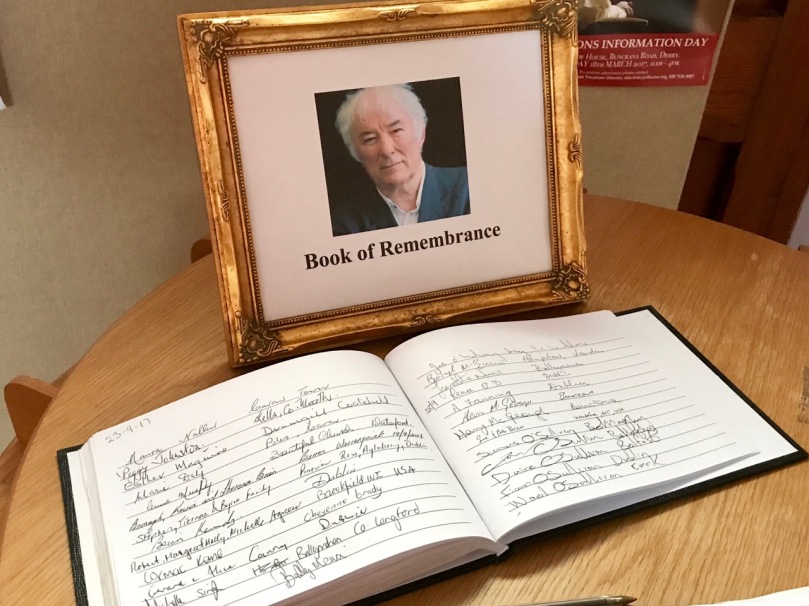 Bellaghy, County Londonderry, in Northern Ireland was the childhood home of Seamus Heaney  who was born at nearby Mossbawn on 13 April 1939, the eldest of nine children. Heaney passed away on 30 August 2013 and, in accordance with his own wishes, he is buried in the Cemetery of St Mary’s Church, Bellaghy. A Book of Remembrance is kept in the church, and on his headstone is a line: Walk on air against your better judgement, from one of his poems – The Gravel Walks. 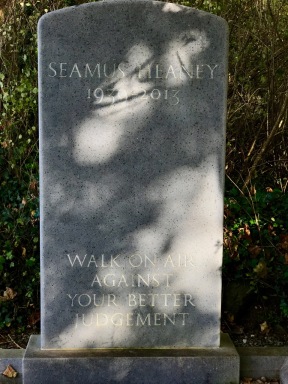 Exactly a year ago – October 2016 – a new building was opened to commemorate Heaney, the Nobel Prize winner, who has been described as ‘…the most important Irish poet since Yeats…’, ‘…the greatest poet of our age…’ and ‘…probably the best-known poet in the world…’ The quality of the HomePlace centre reflects this reputation and provides excellent facilities for the sheer exploration of words as well as performance, lectures and research.

This year sees the 50th anniversary of the death of another of Ireland’s country-born poets: Patrick Kavanagh. We visited Inniskeen, County Monaghan, to search out the old St Mary’s Church, which has been transformed to a Centre – open to the public – which displays information on the poet born and raised on a nearby farm in 1904, the fourth of ten children. The Centre also carries out research into the poet’s life and work, and organises an annual event to celebrate him. I am grateful to the staff of the Centre for allowing me to photograph the interior of the former church.

Appropriately, the grave of the poet can be found in the churchyard. Strangely, an elegant memorial to the poet and his wife (below left) vanished in 1989 and was replaced with a simple wooden cross (below right), said to have been carved by his brother, Peter. I could not get to the bottom of this matter: there are various reports to be found on the internet, including this one from RTE. 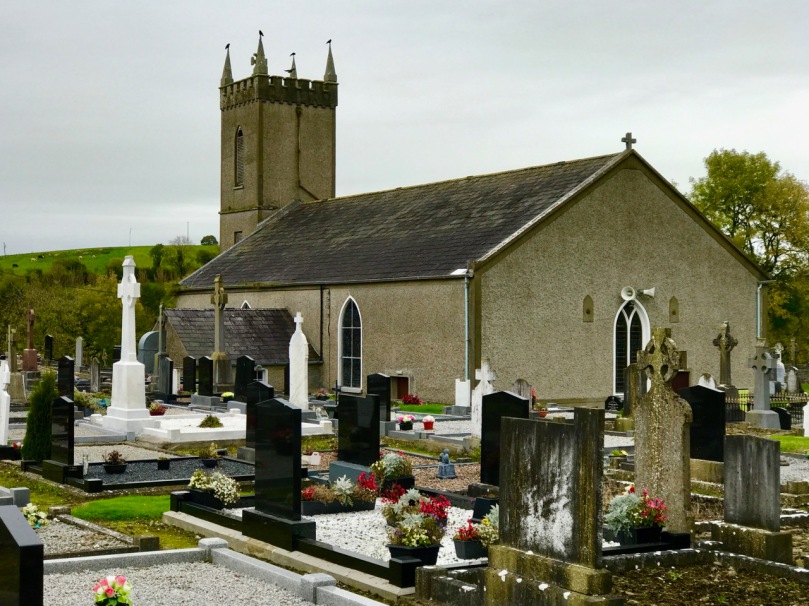 Like Heaney, Kavanagh’s strong influences came from his rural background. Some of his best-loved works portray country life, but without sentimentality. He remained on the farm in Monaghan until 1931, when he walked the 80 kilometres to Dublin. At first rejected by the literary establishment, his work eventually received appreciation. Seamus Heaney acknowledged that he had been influenced by Kavanagh.

When Kavanagh died on 30 November 1967, at the age of 62, he was recognised as …Ireland’s leading poet in English…

For our third commemoration we travelled to Slane, County Meath, to find the Francis Ledwidge Museum. This poet died exactly a hundred years ago, a victim of the Great War.

The Museum has been created in the cottage where Francis was born on 19 August 1887, the eighth of nine children. Again, he came from a rural background. His father died when he was only five, and he spent much of his life as farm hand, road builder, and copper miner. He was an active campaigner for better working conditions, became an early Trade Unionist, and attempted to organise strikes.

The Ledwidge cottage in Janeville, Slane, around the end of the nineteenth century (top), and the cottage – now the Francis Ledwidge Museum – today (lower)

Francis had written poetry all his life, and some was published in local newspapers when he was 14 years old. He attracted the patronage of Lord Dunsany, who introduced him to W B Yeats. Like many other artists, writers and poets, Ledwidge’s life was tragically cut short by the war. In the Third Battle of Ypres he and five companions were hit by an exploding shell. Father Devas, a Chaplain who was a family friend, recorded ‘…Ledwidge killed, blown to bits…’ A memorial was raised to him on the place of his death in Belgium, and a replica of this memorial can be found in the garden of the Janeville cottage.

Seamus Heaney also acknowledged Ledwidge as one of his influences

During our travels we have seen that poets in Ireland have respected the work of their compatriots. Wordsmithing is a time-honoured profession: there’s a common thread running from the Bards of old, who carried traditions, myths and genealogies through generations and over centuries.

Below – a portrait of Seamus Heaney by the Welsh artist Jeffrey Morgan hangs in the HomePlace Centre, Bellaghy