This drawing is a true scale representation of Rock Art on the horizontal surface of a large, earth-bound slab of sandstone in the townland of Derreennaclogh, Co Cork, Ireland. Archaeologists believe that carvings on this stone – and on very many others in Ireland and across the Atlantic coastline of Europe – were made by early farmers during the Neolithic or Early Bronze Age period, anywhere from 5,000 to 3,000 years ago. The carvings shown here were only discovered in the recent past: they had lain under a covering of peaty soil for hundreds or, perhaps, thousands of years and had therefore not suffered the natural weathering that many other examples of Rock Art exhibit. In one section – shown as ‘weathered rock’ on the drawing, the surface had previously been partly visible, and the curved lines which could be seen on this area led the finder of this piece to carefully pull back the overgrowth to reveal a remarkable Rock Art panel – perhaps one of the most complex and best preserved in Ireland.

The rock at Derreennaclogh: Mount Gabriel is prominent on the western horizon

I have been working on this scaled drawing for nearly a year. This long period is partly because my life has been filled with other things (such as moving permanently to West Cork and buying a house which has needed some upgrading), but also because I have been devising a method to measure and record in fine detail the carvings on the stone without any adverse intervention to the rock surface. When my partner Finola was writing her thesis for UCC in 1973 – The Rock Art of Cork and Kerry – it was normal practice to chalk in the carvings and trace over them using a wrapping film, these tracings then being transferred to high quality mylar and photographed for reproduction. Now the codes for archaeological work have changed and it is no longer acceptable to use chalk or any ‘rubbing’ technique: the thinking is that this could damage the surface. There is a whole debate here on how to best preserve our prehistoric heritage – and no doubt there are those who would say that the Derreennaclogh stone – with its carvings in such a remarkable state of preservation – should never have been uncovered at all, or should perhaps be covered over again in a way that will ensure the retention of its markings in a pristine state, while hopefully allowing occasional access for viewing. These matters are being considered in other areas where Rock Art occurs, particularly in Portugal – where some examples are much visited and provided with interpretation centres – and Scandinavia, where many petroglyphs are protected by toughened glass.

Motifs picked on the rock surface

I call my recording method, illustrated here, ‘visual rubbing’. It is not entirely without intervention, as I had to walk across the carved face of the rock, and place a camera tripod on the surface. I suppose this is a lesser evil when compared to some examples on open farmland where cattle walk freely across Rock Art panels or where – in places – rocks are being broken up to create new pastures: we have seen alarming signs of large excavator tracks passing right beside some good recorded pieces here in West Cork. Where the carved stones are listed in the Archaeological Record the landowner is always made aware that the monument is sacrosanct, but this does not guarantee practical conservation. Also, it may be argued that the topographical context of Rock Art is important (another debate) and that there should be restrictions in destructive activities to landscape in the vicinity of prime examples. Fortunately, the Derreennaclogh panels (there are two) are in bogland which is not currently grazed or used agriculturally.

The rock measures about 3m by 4.5m at its extremities, and it was fairly easy to establish a 50cm grid using tapes. Fortuitously, one relatively straight side of the rock lies on a north – south line (magnetic north), and it was convenient to set my grid to compass orientation. The stone fills 55 of these grid squares and – using a Leica camera with a Vario-Summicron 2.8 lens – I took 55 high resolution photographs, each one centred on a grid square, and with the camera held a constant 1.5m above the flat rock surface. Back at the work station I stitched together all these photos using Photoshop, and this has given me a very accurate scaled base which is the bottom layer of the drawing I have subsequently created. My training as an architect has included using CAD techniques (Computer Aided Design), and I can trace very accurately the outlines of picked markings which show up on the photograph. The drawing is made as a digital file which can be reproduced physically to any size or scale, depending on the properties of the printer used. A CAD drawing can have any number of layers which can be switched on or off (or made transparent) to provide a matrix of information. My layers so far in ascending order are:

4   Perimeter tracing of the rock

6   Tracings of the natural rock fissures

7   Tracings of the rock carvings 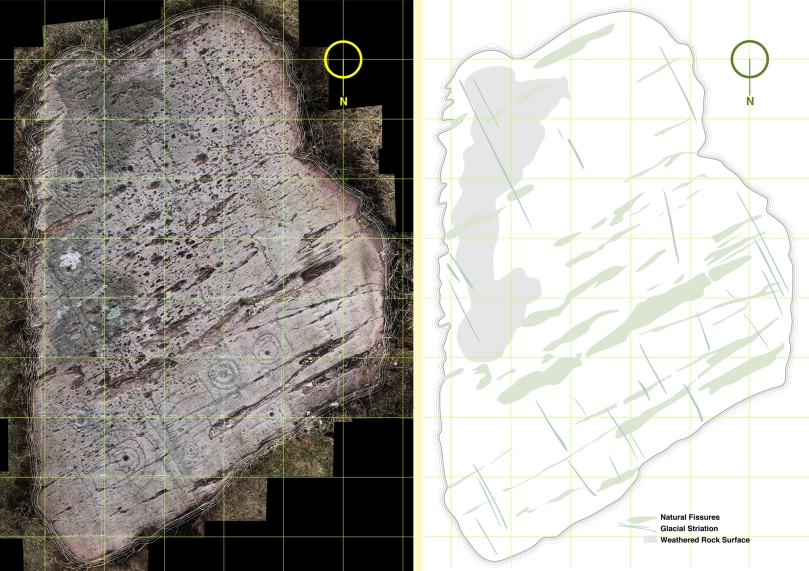 I have added layers (5a, 6a and 7a) so that I have the outline tracings of carvings etc, but also ‘fills’ to these outlines. All these layers can be given different colourings. I have the intention also to separate out motifs depending on ‘motif type’: for example, the Archaeological records for West Cork distinguish between ‘Rock Art’ and ‘Cupmarked Stones’. Cupmarks are the simplest form of motif, and the most prolifically spread. The Cupmark is a concave depression, often surrounded by one or more concentric rings, and sometimes with a radial groove from the ring to the outermost circle or beyond. ‘Rock Art’ can include any other motifs – rings, squares, figures of eight, dumb-bells: the rock at Dereennaclogh provides examples of all these and more. A drawing layer devoted just to cupmarks would be useful. 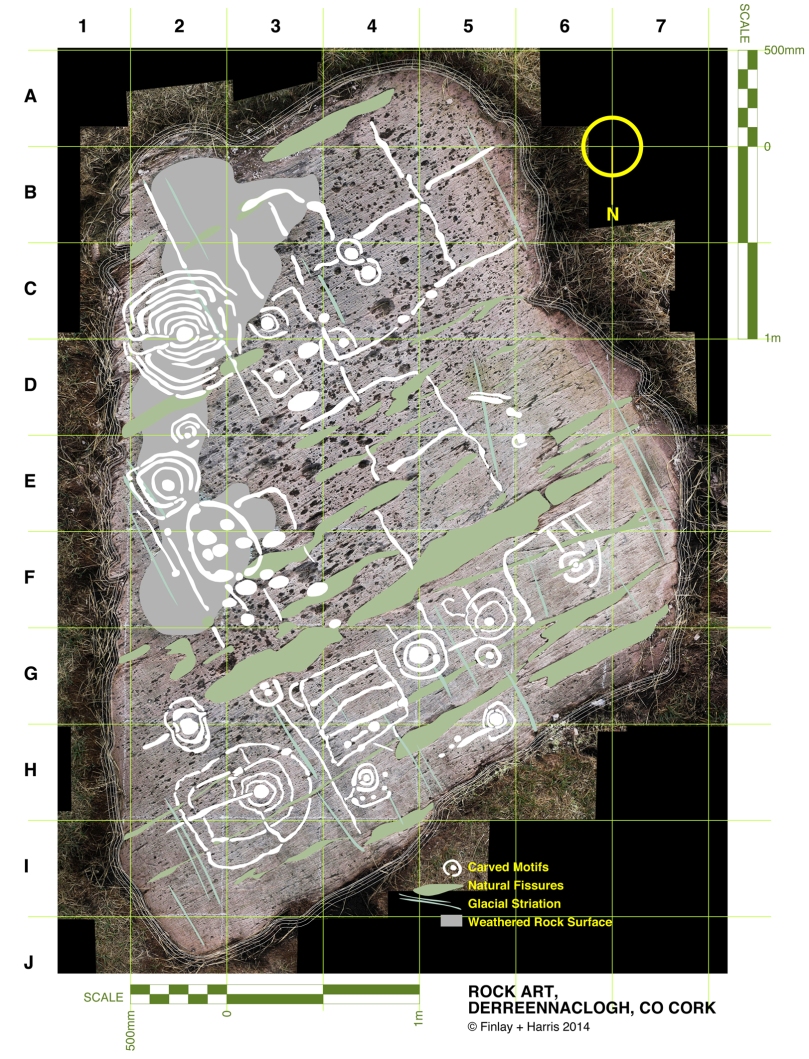 Motifs traced over the photograph

The motifs are ideally traced on a large screen, which enables the picking to be clearly seen: ‘picking’ means the hammer-on-stone technique of carving out the shapes. So far I don’t have a layer which includes information on the depths of the carved motifs. This would in any case be subjective and could only be done by taking a large copy of the drawing to the rock, measuring the depths of each mark and recording this ready for transfer to the file back at the workstation. This is a future job, and will involve a more selective coding to show the extent of picking graphically, It would in any case be academic and not necessarily a true record of what was carved, because of erosion and wear factors. Derreennaclogh is a valuable trial for developing these techniques as the carvings are on the whole in very good condition. It is not so easy on other examples: there is a further debate waiting on how it might be possible to retrieve information from a more heavily worn rock surface. Laser scanning surveys are showing up some interesting possibilities but better still would be an ability to analyse the body of the rock in a way that would show up the ‘attack marks’ from the original picking which would have altered the molecular structure of the surface. Laser scanning and this ‘attack’ recording technique (if it were possible) could both require the hauling of relatively expensive and relatively unwieldly equipment out into the field. My ‘visual rubbing’ technique is tabled as a method to be applied anywhere that is humanly accessible, and is within the capability of a retired CAD-adept draughtsperson with time on his or her hands.

There are drawbacks to the ‘visual rubbing’. One is the subjectivity of it. No rock surface is completely flat or smooth. There are striations, faults, pits and holes. Some of these resemble the carved motifs (particularly when the rock has been severely weathered), so I have to make decisions at all times as to what is natural and what isn’t, and also on where the actual edge of the carving is. Often it seems possible that the natural features of a rock influenced or informed any ‘design’ intentions. I’m sure many of my decisions are arguable. I can only say that my guesses are ‘educated’ by experience.

But this dilemma has led me to consider a further layer: intentions. I know this requires a leap of imagination and will seem bizarre – if not anathema – to trained academics, but when I am finely tracing some of the images I find myself asking what the carver originally set out to do in each individual case. So many of the marks are nearly geometric – concentric circles and parallel lines for example – but just don’t make it. Obviously there are limitations in the carving technique and you can’t rub out mistakes. Also it is interesting that some of the motifs seem to relate to natural striations and fissures – which is why I have shown the most prominent of these on separate layers. So here I am daring to have a ‘top’ layer which shows my interpretation of what the Rock Artist might have set out to do if he or she didn’t have the limitations of crud(ish) tools and materials. Please ignore this layer if you are not whimsically inclined – or a romantic. I am incurably romantic, and always still waiting for that moment when I am pensively standing on the rock and will be startled by the appearance beside me of a stray artist carver from 5,000 years ago. Miraculously we will be able to communicate – and, after that encounter, I will be able to provide the answer to the question that is always asked by voyeurs of prehistoric Rock Art: what does it all mean? 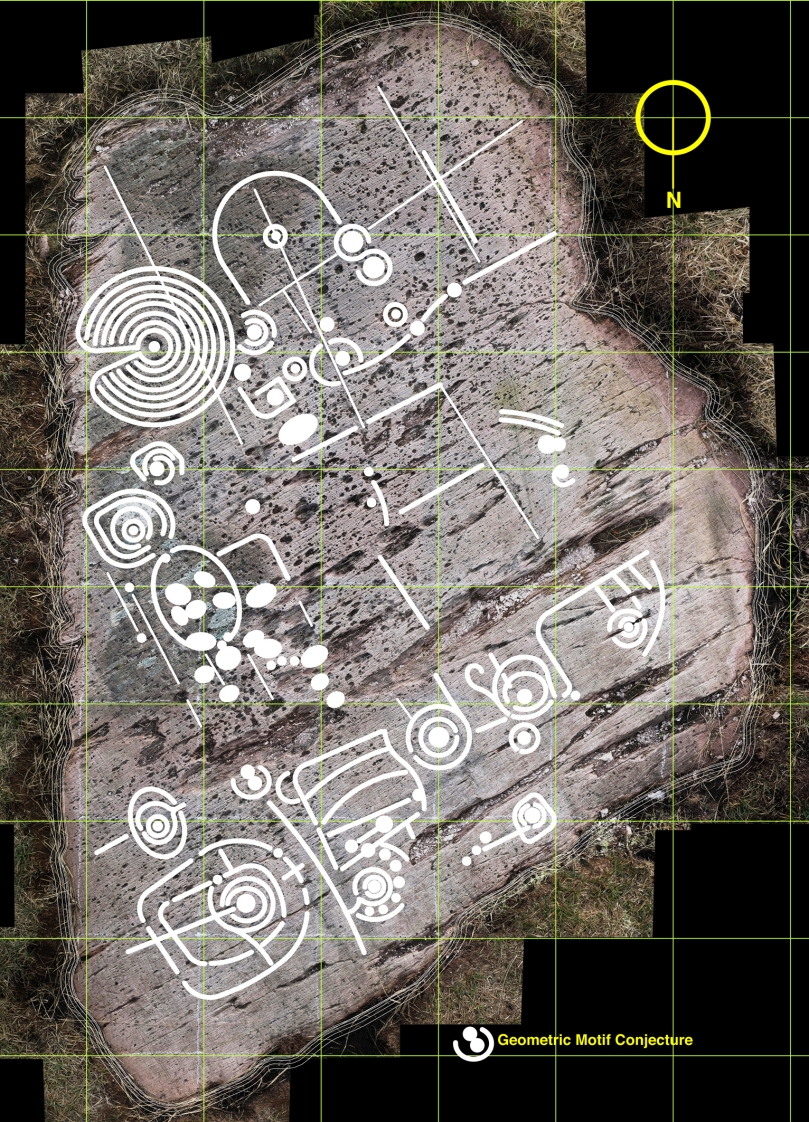 Whimsy – a conjectural geometric redrawing of the motifs at Derreennaclogh