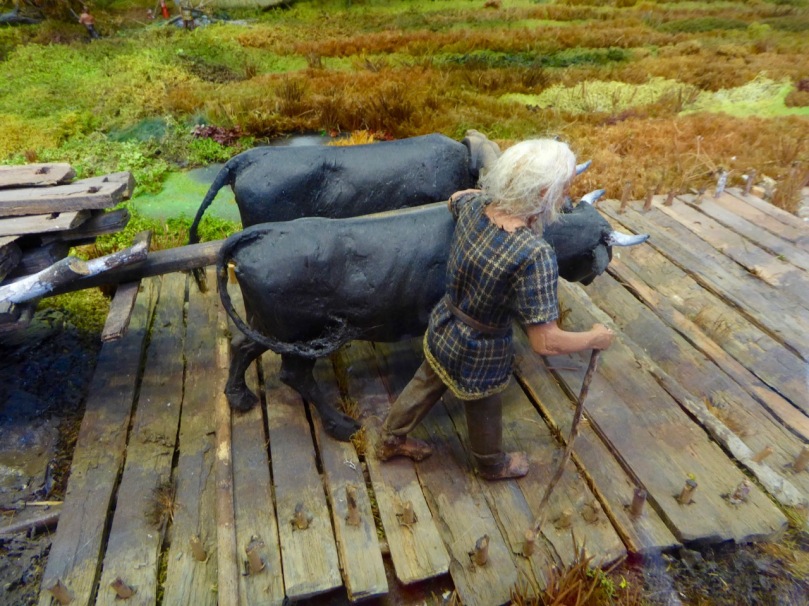 Bogs are mysterious and dangerous places now, and they were even more so for our ancestors. The raised bogs of the midlands were laid down after the ice age and covered vast areas of land, creating difficulties and opportunities for prehistoric peoples. 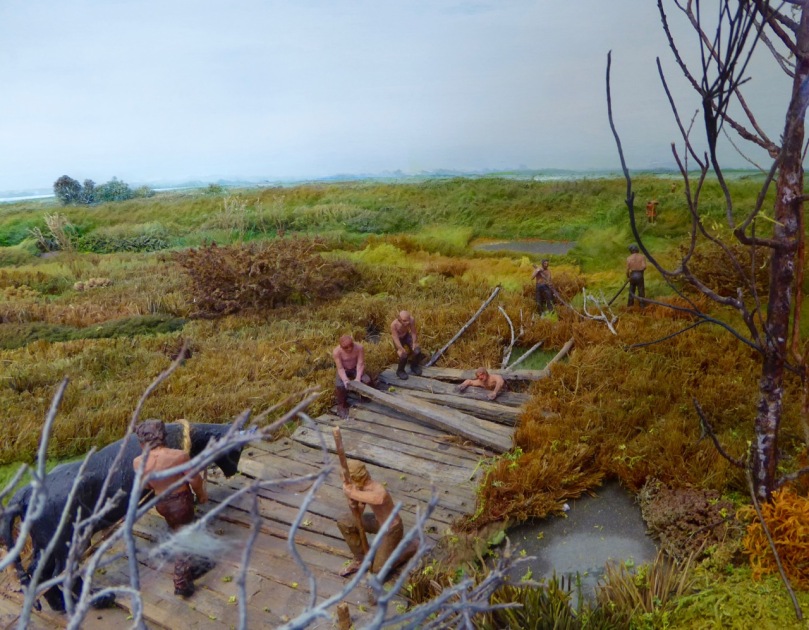 Turf cutters find things in bogs all the time – last year we wrote about the extensive field systems under the blanket bogs of the Ceide Fields of Mayo. Bog bodies are the most fascinating finds no doubt, but all kinds of organic materials can be preserved in the acidic and anaerobic environment of the bog. 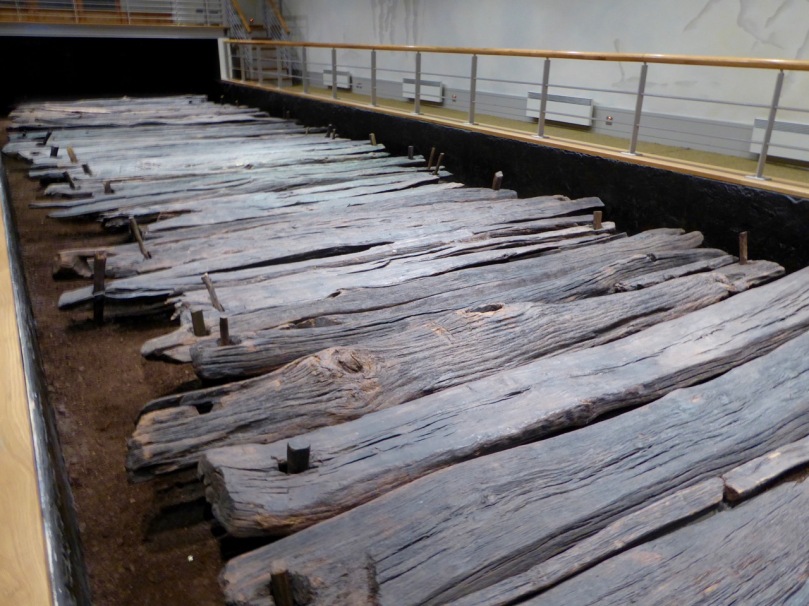 In  Corlea, County Longford, what was found turned out to be the longest and largest Iron Age trackway ever discovered. It was excavated by Dr Barry Raftery in the late 80s/early 90s and a whole section of it is conserved and on display in an attractive visitor’s centre in Corlea, which is located exactly where the trackway was found. Noel Carbery was our guide on a recent visit and we couldn’t have asked for a more enthusiastic and knowledgeable person to answer our questions and show us around. 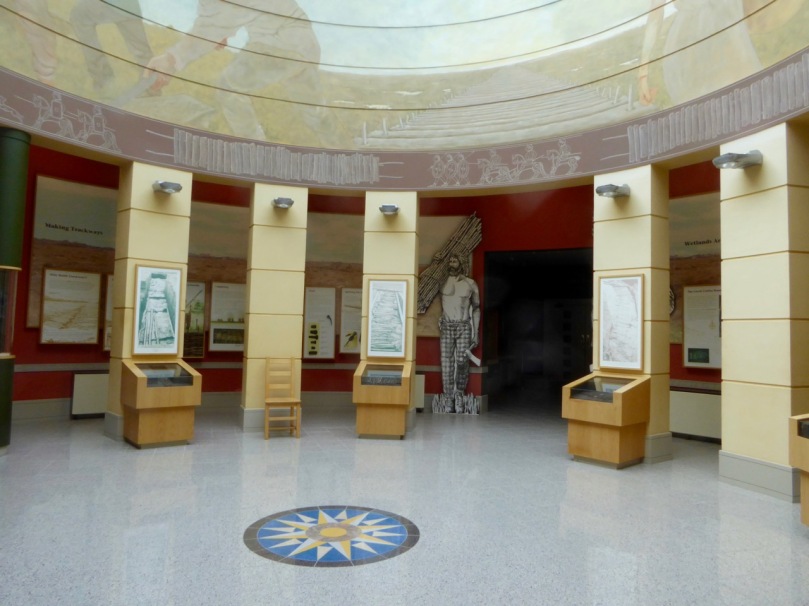 Building the road was a massive undertaking and must have taken hundreds of people working together. Using dendrochronology to date the oak, archaeologists determined that the trackway was constructed in 148BC, placing it in the Iron Age. It is speculated that it provided a routeway from the Shannon to the royal inauguration site of Rathcroghan in Co Roscommon, allowing wheeled vehicles to cross the bog. We can picture warriors in their chariots and full regalia following a ceremonial way to some great feast at Cruachain. 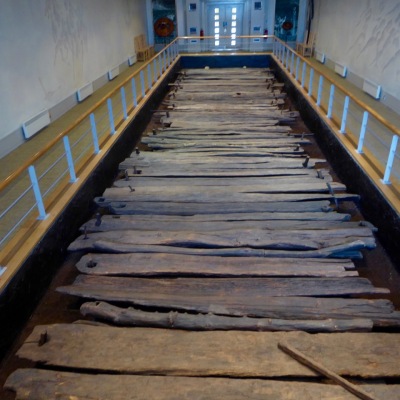 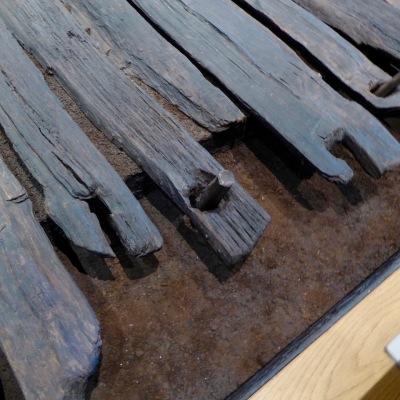 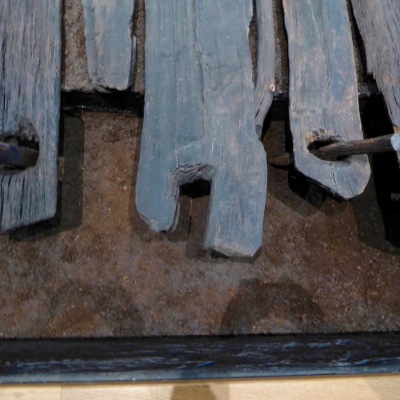 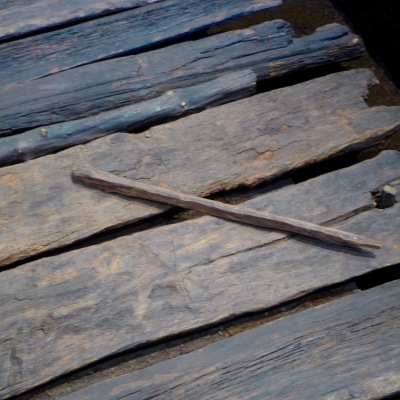 The trackway was held in place by means of wooden stakes

Ironically, its very magnitude proved its undoing – it was so heavy it sank into the bog within ten years of being built. Oak planks were laid on runners, occasionally supported by additional brushwood, and fixed in place with stakes which served to peg the boards to the underlying peat and keep them from moving around. A layer of peat on top may have helped to even out the surface. 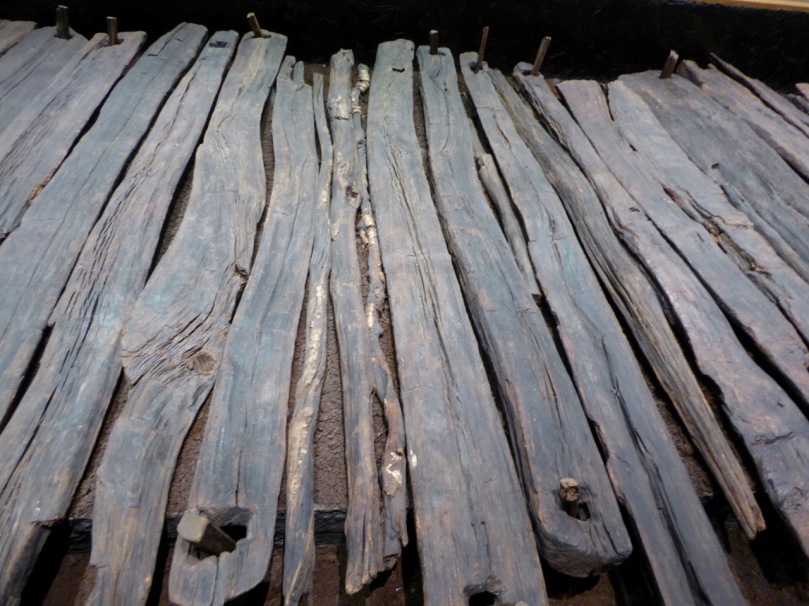 Gaps are filled in with branches and saplings of oak, ash or birch

The builders showed considerable skill in splitting the logs to form planks and in whittling the stakes and boring the sockets, using metal axes and adzes. Gaps were filled in with round saplings  and brushwood. 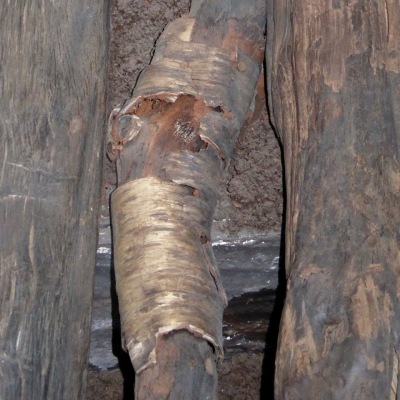 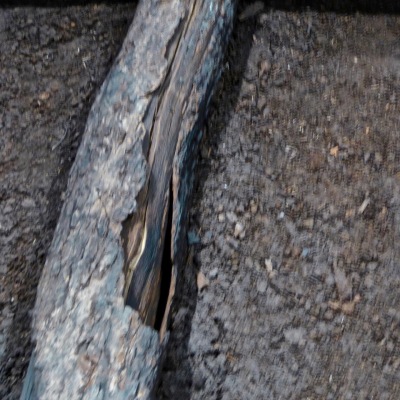 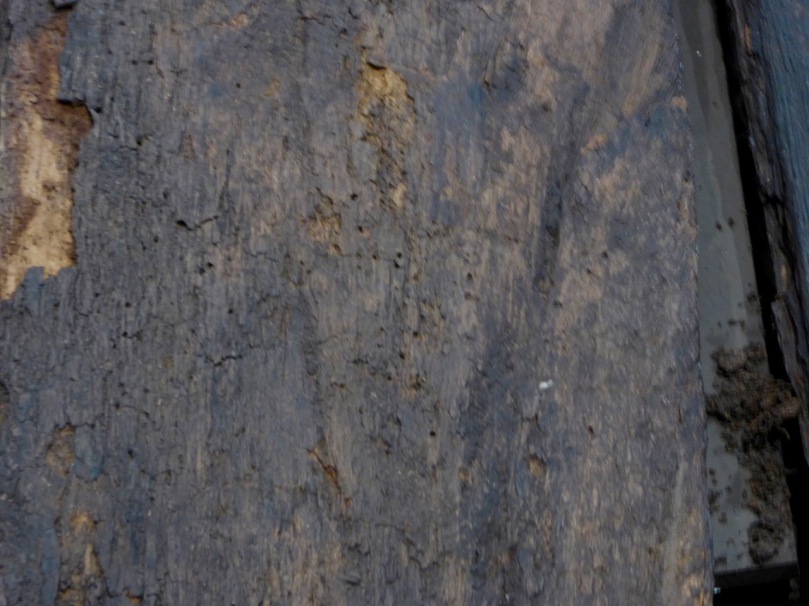 Top left – 2000 year old silver birch bark, beautifully preserved. Top right – some shrinkage of the interior wood is visible. Below – is this woodworm?

The excavation and conservation was as large an effort as building the road. Once the planks were revealed they had to be kept dry, then immersed in special substances and freeze dried. Finally, they were returned to Corlea, to the new visitor centre where they are kept in climate-controlled conditions. Nevertheless, some deterioration is inevitable and on our visit we observed shrinkage of one runner away from its bark, and some signs of what looked like woodworm in one of the planks, indicating the difficult task of conserving two thousand year old timbers. 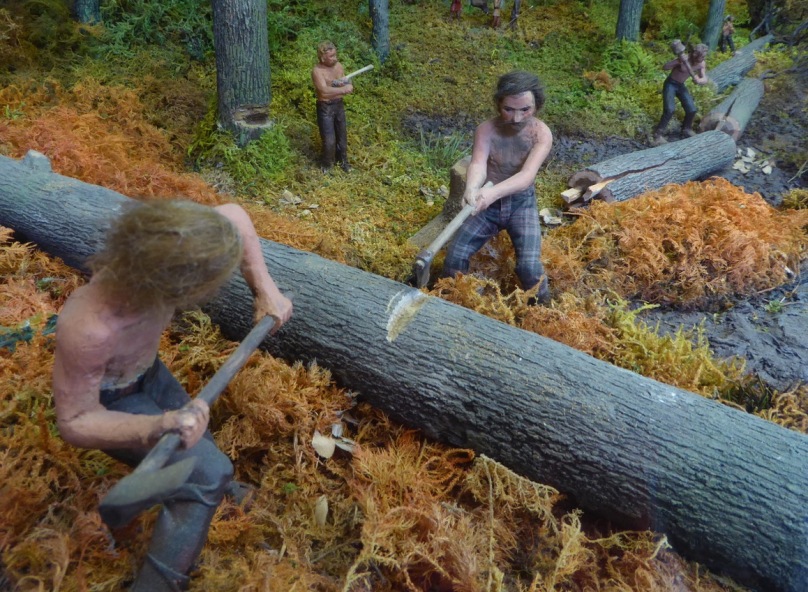 There is lots of fascinating information at the Visitor Centre about other trackways (including some from much earlier) and about building methods. I particularly loved the little diorama that an artist had made showing the trackway under construction. We also learned a lot about the bog itself, which surrounds the Visitor Centre on all sides. 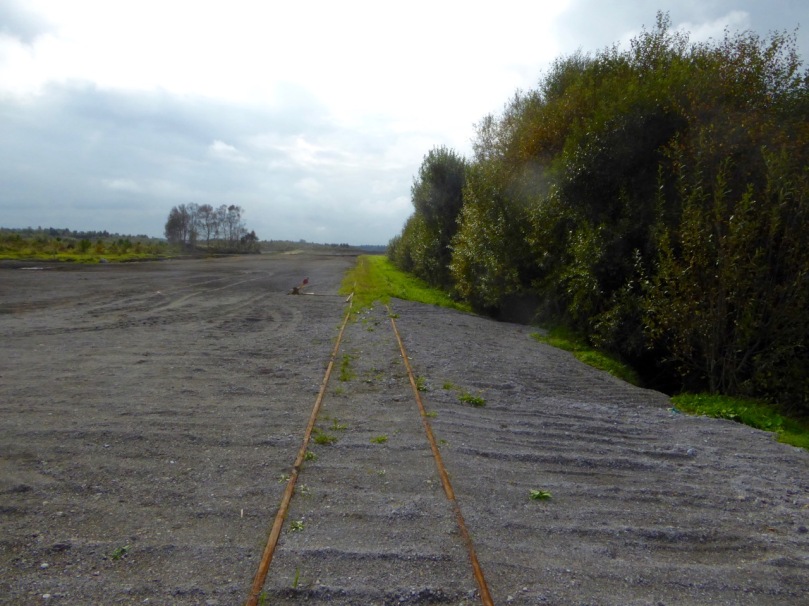 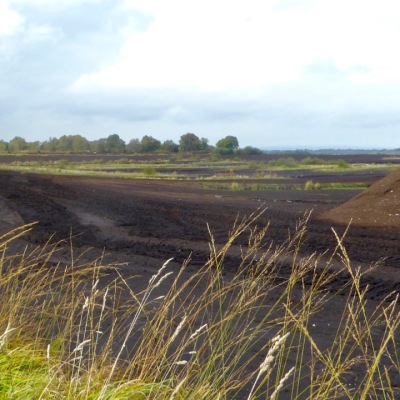 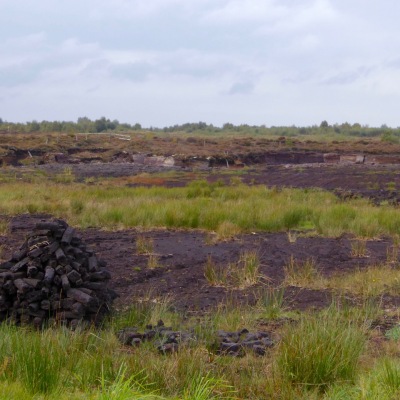 Top – a modern bog trackway, in the form of narrow-gauge railway tracks. Below left – this bog is being ‘milled’ to provide fuel for a power station. Below right – a more traditional cutting to provide domestic fuel

The Corlea Trackway deserves to be much better known than it is. I highly recommend a visit if you’re anywhere close by – it’s not everyday you get to walk beside a 2000 year old royal road! 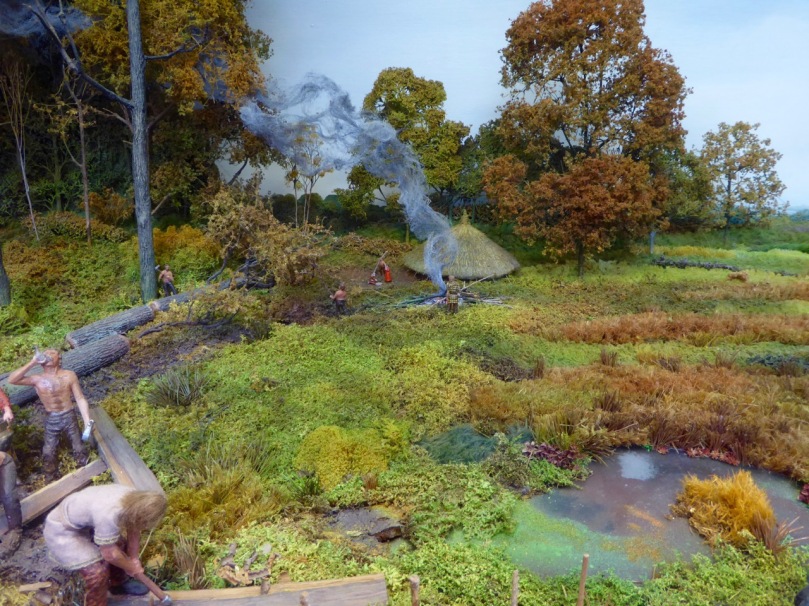