Fortified houses are a distinctly Irish phenomenon. The Tudor period in Britain ushered in a great era of manor house building with many distinctive features. But England was a peaceful place – the owners of these great houses did not expect to be attacked. Tudor Ireland was a very different environment: life was still dangerous and conflict between the native Irish and the planter class, or between Irish clans, was common. 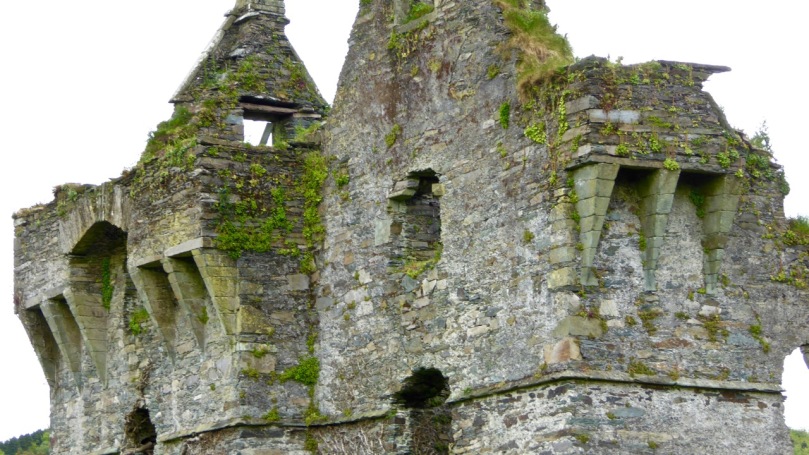 Up to the end of the 16th century the castle/tower house was the residence of choice of the powerful – a tall stone keep mainly focused on defensive features and horribly uncomfortable to live in. (See Illustrating the Tower House for a complete run-down on tower houses.) The new manor houses emphasised the horizontal rather than the vertical, and were built with comfort in mind. However, they incorporated some of the defensive features of the tower houses – they were “fashionable but defendable.”

While tower house windows were notoriously tiny, they became much larger in the new manor houses

In Ireland they represented

a public display of power and wealth…[and] a long-term investment in their owner’s regional future and were monuments to an aspiration for an English and Continental house style suited to local Irish conditions. On a basic level the construction of a fortified house represented the owners’ desire to modernise and Anglicize.

This quote and much of the information that follows are taken from The Fortified Houses of County Cork: Origin, Fabric, Form, Function and Social Use of Space, by Joe Nunan, who has generously made it and related material available on his website.

At Coppinger’s Court, a small gun loop in the wall among the large windows

Fortified houses were built of stone but unlike tower houses all internal floors, stairs and partitions were of wood. Defensive features included machicolations, bartizans, wall walks, gun loops, corner towers or wings to provide for flanking fire. They were built starting about 1580 up to about 1650, in a style generally known as Elizabethan.

Coppinger’s Court marooned among the fields and modern houses, near Rosscarbery. Walter Coppinger had a vision of a large settlement along the Roury River here, but it never came to fruition

There are four surviving fortified houses in West Cork (although Joe Nunan would include Baltimore Castle as well). The most impressive is Coppinger’s Court, in Ballyvireen townland near Roscarbery: indeed it is one of the most magnificent examples of this type of dwelling in Ireland. Some of the mullions remain in upper windows, and a sharp eye will spot gun loops in the outer walls. The machicolations are particularly fine, with impressive cut stone supports. This was the home of the infamous Sir Walter Coppinger, whose plan was to build a complete settlement around him in this lovely spot on the banks of the Roury River. He was a despot who got rich through clever manipulations of mortgage documents and he was said to hang his enemies from one of his windows.

The house was so awe-inspiring in its time that the legend developed that it had a window for every day of the year, a chimney for every week and a door for every month. The house was eventually attacked and ransacked in 1641 and has sat in ruins ever since. Sadly, one of the magnificent chimneys fell down in the storms of early 2014. Evidence of a bawn wall remains, with possible outdoor cooking areas.

The fortified house at Gearhameen near Durrus, built by the MacCarthy Muclaghs, provides evidence of the comfort that these new ‘castles’ provided. The household work was done on the ground floor – large kitchens contained huge fireplaces, and in this house we can see the main kitchen fireplace had a bread oven to one side and a slop hole for sweeping out leftovers to the pigs (see below), who must have been in an attached pen (the smell!). 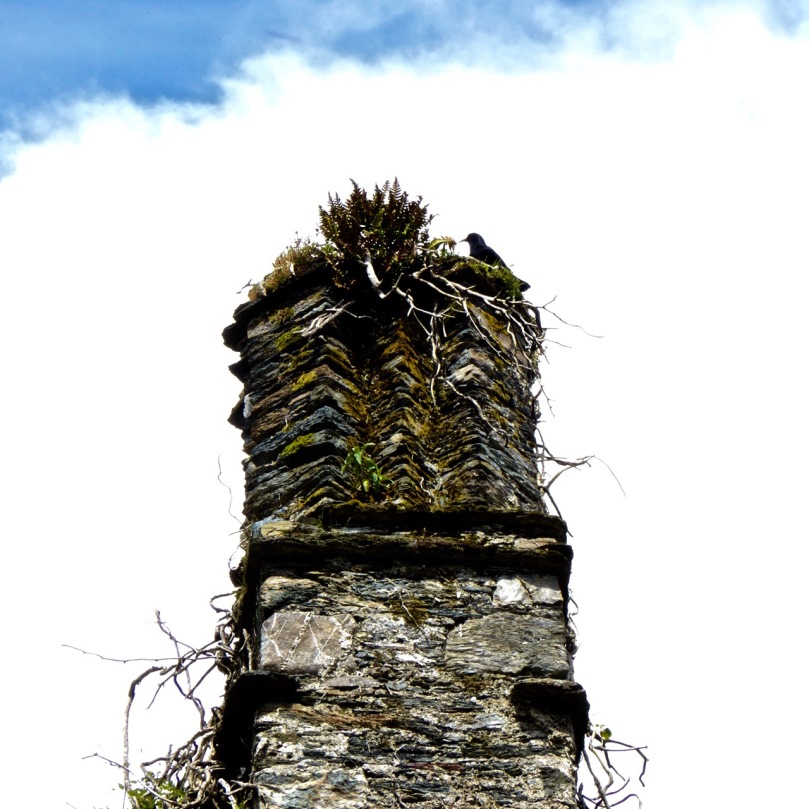 Rather than the machicolations we see at Coppinger’s Court, corbels on the outside walls probably supported wooden or stone platforms. 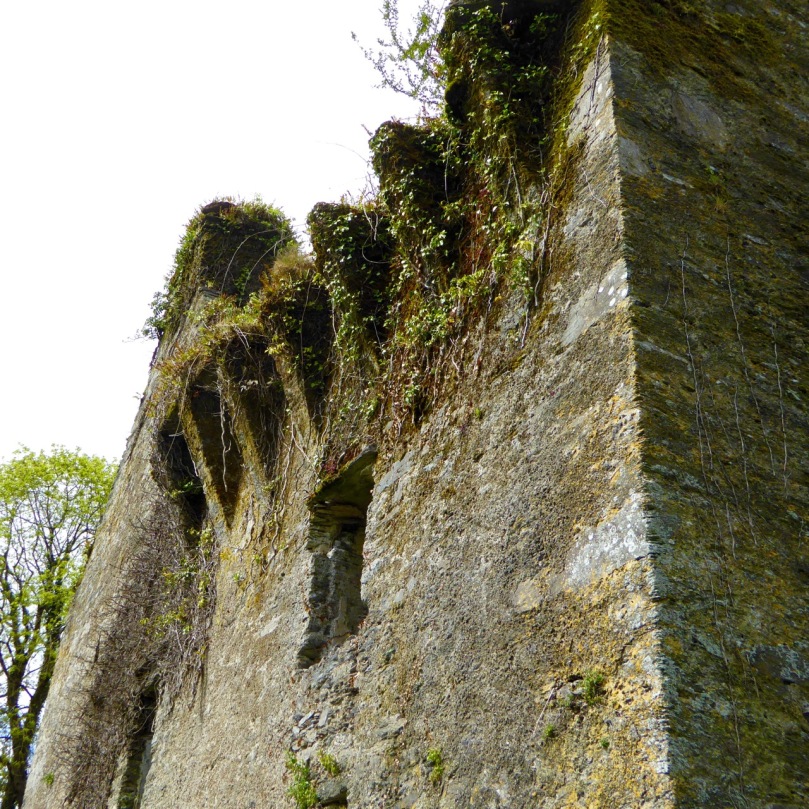 Like Coppinger’s Court, the outer walls still stand to their full height, but the loss of a keystone above one arch, and the consequent development of a large crack above it (below), bodes ill for that section of the wall.

The house at Reenadisert, near Ballylickey, (below) has been built onto and within over the centuries, serving as a modified dwelling place and as farm buildings. It was the stronghold of an O’Sullivan.

It is in a very ruinous state inside – the eeriness is enhanced by an enormous crows’ nest that has fallen from inside one of the chimneys to rest on the ground. There is evidence of a basement but this cannot be accessed.

That this house is still standing is something of a miracle. It is on the same land as a ruined hotel and Celtic Tiger-era abandoned housing project and I cannot find out any information about its ownership or future.

The final house (below) is at Aghadown, once home to the Becher family, and consists only of one wall with attached towers. Ivy has threatened to take over most of it – I love Leask’s description of ivy – “destructive green mantle beloved of the sentimentalist.” The house occupies high ground and once had a commanding view. Nearby are the remains of a belvedere and pleasure garden that once formed part of the demesne. Have a look at Capturing the View: Belvederes in West Cork for more on this feature of Aughadown House

Through all that ivy one can make out traces of the slate that once hung on the wall above the ground floor, the outline of corbels at roof level, and a string course between the ground and first floor.

One of the Fastnet Trails goes past Aughadown House now, and there is a neat little plaque giving more information about the house and the Bechers. 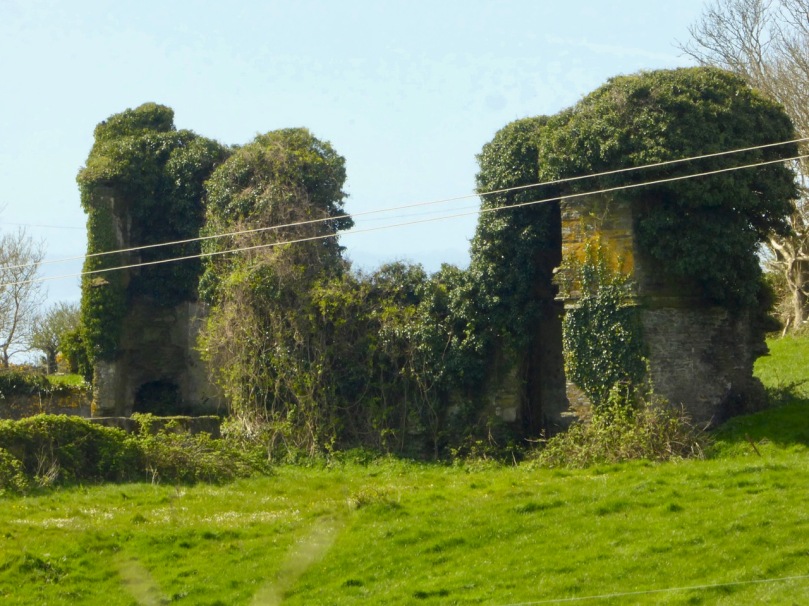 Joe Nunan provides useful summations of Irish fortified houses. Among other points, he says the following:

The fortified houses built in Co. Cork had a unique Irish architectural quality and a distinct southern English look and feel; the result of contacts built up between both regions, politically through plantation-immigration and economically, through trade with the port and fishing towns of Waterford, Cork, Kinsale, Youghal and Baltimore. The social changes that took place in Tudor England were reflected in architectural form by the elites in that society and it was the latter who spearheaded the Munster plantations. They were noblemen who viewed Munster as another region within a larger England and it was through these individuals that the initial architectural influence of the many gabled, oblong country manors with circular, square, rectangular and hexagonal corner-towers was introduced into Co. Cork. 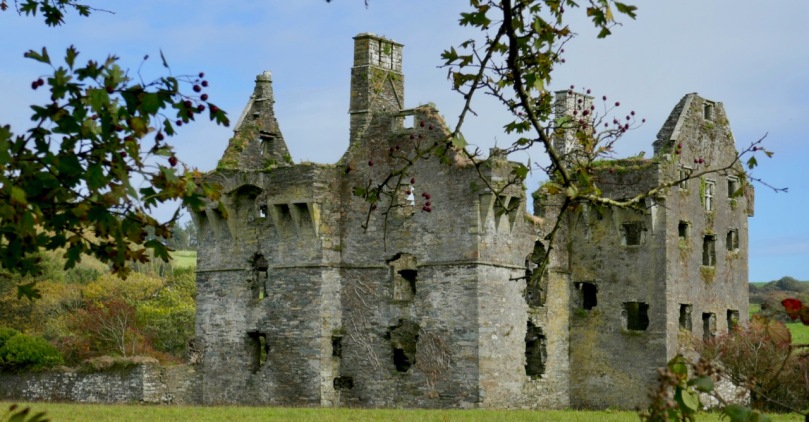 We are lucky to have these fine examples of  fortified houses in West Cork still. However, all of them  are in a perilous state of dereliction. Gearhameen’s owner has tried to stabilise the building and stave off collapse but all of them may eventually succumb to the natural ravages of time. That’s a sad thought.

An earlier version of this post was written in 2015, now edited and updated.