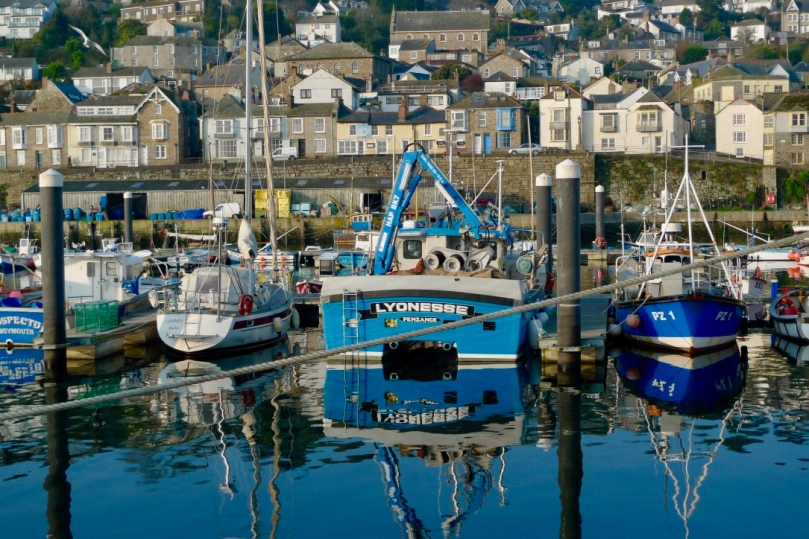 Picturesque Newlyn, Cornwall – the fishing village was the centre of a major art movement in the late 19th and early 20th centuries

I have been working hard with Uillinn – West Cork Arts Centre‘s fantastic new gallery in Skibbereen – to bring over an exhibition of the work of contemporary Cornish artists, which opens in June. West meets West will be the launch of a continuing programme which sees the art and culture of Cork and Cornwall being shared, to the mutual benefit of all working artists and art lovers – and to residents and visitors. 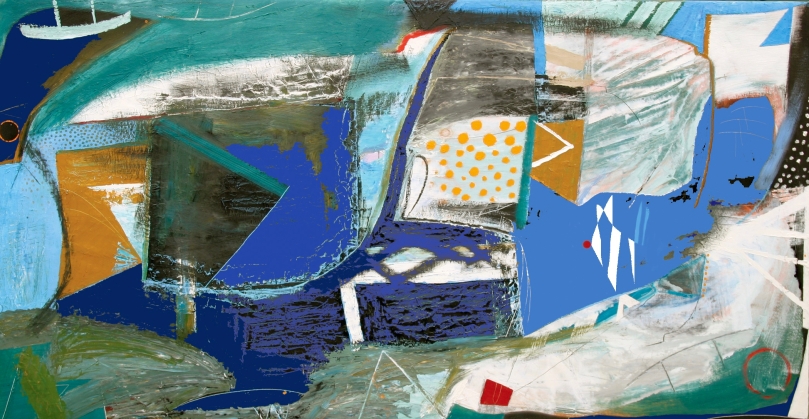 Greenstone – a canvas by the late Matthew Lanyon, one of Cornwall’s important contemporary artists whose work will be shown at Uillinn in June this year

Why Cornwall and Cork? And, particularly, why these westernmost peninsulas of Ireland and England? Well, as you may have noticed from past posts on this Journal, historic links between the two geographical areas go back a very long way. Starting between three and four thousand years ago copper was mined on Mount Gabriel and was mixed with tin from Cornwall to produce a revolutionary new metal – Bronze. This material was hard enough to make tools and weapons – therefore a practical commodity: also it does not rust. It has, too, been used to make bells for centuries, so its properties include sonority. In fact the word bronze probably originates from the Medieval Latin bronzium, in modern Italian bronzo, meaning ‘bell metal’. Regardless of all this, the important thing we know is that relations between the west of England and the west of Ireland were well enough advanced to set up regular trading between the two outposts in those far-off days.

Tony Lattimer, international award winning ceramic artist based near The Land’s End in Cornwall, whose large ceramic sculptures will be shown in West meets West, Skibbereen, June of this year

In a recent post I alluded to the incredible debt that Cornwall owes to us in West Cork because we gave them their patron saint – Saint Piran. The fact that the gift wasn’t intentional shouldn’t delay us too long: we tied Cape Clear’s Saint (whose Irish name was Ciarán) to a millstone and threw him over a cliff. Instead of meeting his doom he miraculously surfed the millstone across to the Cornish coast, where his landing place – Perranzabuloe – is named after him, and where he is royally celebrated on March 5th every year, with all the zeal that we show to our own St Patrick! 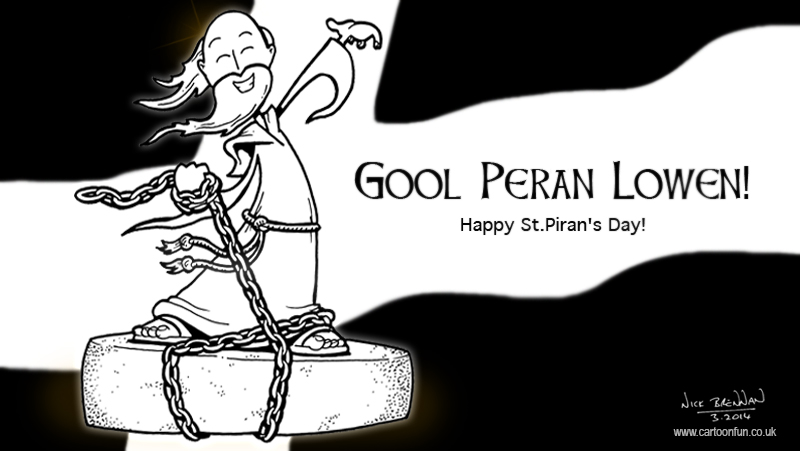 Apart from metal mining and saints, another important connection is shared fishing grounds. From medieval times onwards (and perhaps before) the Cornish fishing fleets put out from Mousehole and Newlyn to follow the pilchard and herring shoals across to Roaringwater Bay. This is really where art comes into our story, as it was the way of life of some of the Cornish fishing communities that attracted artists to that western County of England in the late nineteenth century, once the arrival of the Great Western Railway in Penzance had established the direct connection with London. Newlyn was an early focus, and a young man from Dublin, Stanhope Alexander Forbes, an up and coming young painter in the plein air tradition, made his home there in 1884 and stayed for life. Forbes found in Cornwall a true ‘rural idyll’: an unspoiled countryside where life was simply lived, and a rugged coastline with a magical quality of light. Known as the ‘Father of the Newlyn School’, he gathered around him like-minded artists who recorded (and perhaps romantically idealised) the way of life of the communities there, and that special quality of the light, in canvasses which are highly admired and respected today. 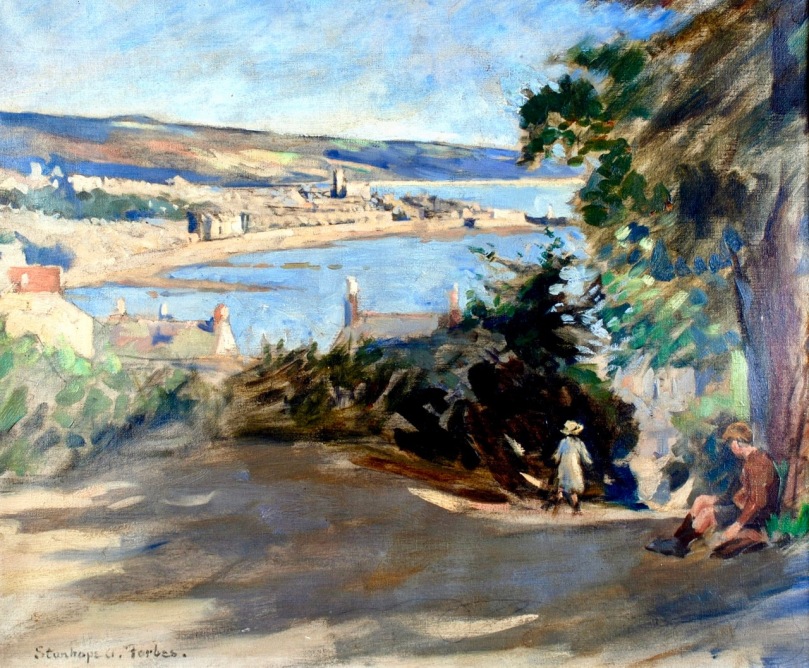 A preliminary sketch by Stanhope Alexander Forbes for a painting known as On Paul Hill (Paul is the name of a village between Newlyn and Mousehole in Cornwall). Forbes painted in the Plein Air style, out of doors and from real life

I made my home in Cornwall for a number of years, before I decided that I hadn’t come far enough to the west, and followed the pilchards and herring myself to Roaringwater Bay, where I now look down on them from my eyrie in Nead an Iolair (although the shoals are today much diminished). During my years in Cornwall I came to know and respect the stories of the artists from Victorian years up to the present day. The ‘Newlyn School’ which Forbes represented was only one piece of the jigsaw there: we will explore others later. Art is probably Cornwall’s biggest asset. Ever since the opening of the Tate Gallery in St Ives – established there because of that town’s historic links with artists and craftspeople of international repute – ‘art tourism’ has grown to become a major year-round driver of the local economy. 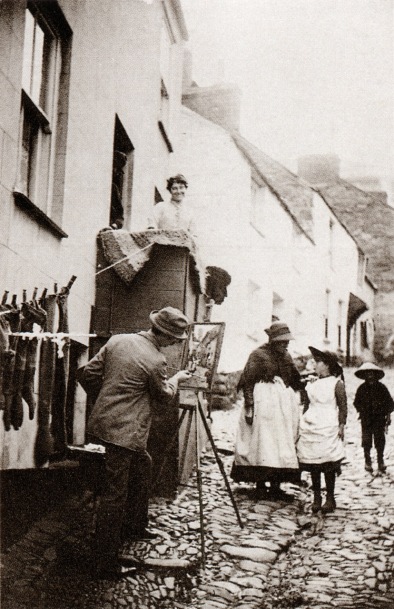 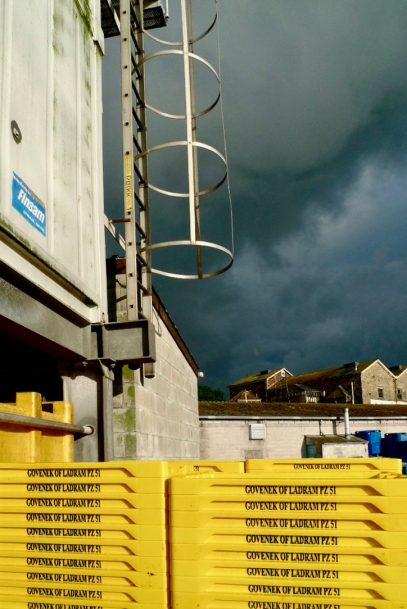 Cornwall is home to a number of artists renowned today in the British Isles. I got to know many of them when I lived in Newlyn. Three of them will be exhibiting in Uillinn from 3 June to 8 July this year: Philip Booth, Matthew Lanyon and Tony Lattimer. Their work is large scale, stimulating and mutually complementary: constructions, canvasses and ceramic sculptures. Please make a note of the dates now: this exhibition is important for West Cork and for Cornwall. Please don’t miss it!

Below: Philip Booth, from Lamorna, Cornwall, will be showing a number of his spectacular relief constructions at West meets West, Uillinn, Skibbereen, in June. This one is titled ‘Formed in Running Water’ 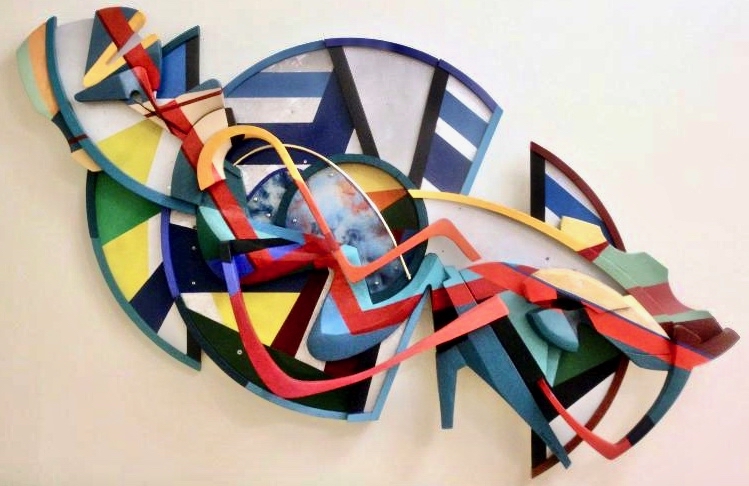