Schools are back; fields are being cut; the shutters are going down on the holiday houses around the Cove. And – the good weather has arrived! Hot days and red sunsets: West Cork is the place to spend autumn…

It was just such a golden autumnal-feeling day when our friend (and Fastnet Trails mastermind) Eugene McSweeney called us to see if we would like a trip out to the old metal mine north of Ballydehob, in the townland of Derrycarhoon. Of course we would! Local farmer William Swanton led the expedition: William’s family had connections with mining – he told us that his grandmother’s father had been a Captain of the mine.

You will know that we live in the townland of Cappaghglass, and this has a mining history, as does the neighbouring townland of Ballycummisk. Also, there are ancient mines on the slopes of Mount Gabriel, not far away, and more mining activity in other parts of the Mizen, Sheep’s Head and Beara Peninsulas.

1957 scene at Allihies Mine, Beara Peninsula 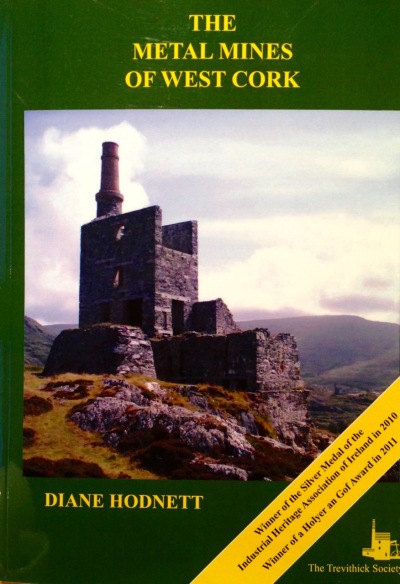 While many aspects of the 19th century history of the old mine at Derrycarhoon have been well recorded (I am indebted to The Metal Mines of West Cork by Diane Hodnett, The Trevithick Society, 2012), the site itself had for some time been difficult to reach and interpret as it was in a dense forestry plantation established in the 1960s and 70s. Now, however, much of the matured forest has been cleared (albeit leaving a devastated landscape) and it is possible to piece together the layout of the workings. Please remember that the mine is on land managed by Coillte and is subject to Coillte’s policies on access – permission must be sought from the landowner before visiting; also, a guide is essential – there is very rough ground and open and unguarded shafts and trenches. 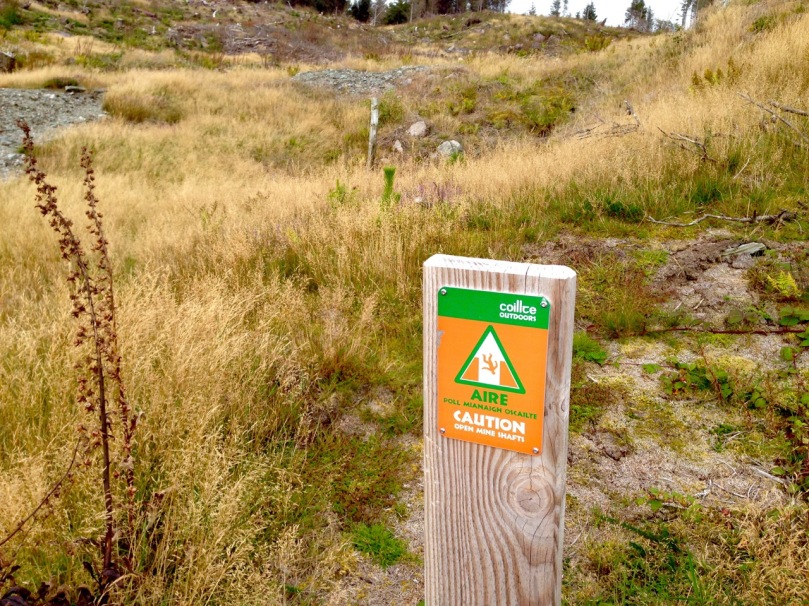 What is so special about this mine is that it has apparently been exploited firstly in prehistoric times, and then again in historic times – prior to its most recent incarnation in the 19th century. Professor William O’Brien of UCC recognises ‘…the recently-adduced evidence for early medieval operations at this site, which is quite unique in the history of Irish metal mining…’ (A Primitive Mining Complex at Derrycarhoon, County Cork – Journal of Cork Historical and Archaeological Society vol 94). While other mines on the Mizen Peninsula have shown evidence of being worked initially in the Bronze Age and then subsequently in modern times, Derrycarhoon is the only one to date which can confidently claim to have also been in use in between those times.

Intrepid Finola inspecting the deep shaft at Derrycarhoon, top, and her photo, below – note the copper staining

We have explored links between West Cork and Cornwall in previous blog posts (here, here, here and here). When it comes to metal mining anywhere in the world there’s usually a Cornishman involved and here is no exception to that rule. The mine agents – whose job it was to prospect and direct operations – were always known as ‘Captains’. A dynasty of Mine Captains was founded by Charles Thomas (1794-1868), a mining agent and share dealer in Camborne, Cornwall – responsible for the very successful development of the Dolcoath Mine in Camborne. Mineral rights here were established in 1588 and copper was being produced in some quantity by 1720. Thomas (who had started work in the seams of Dolcoath at the age of twelve) stepped in as Captain in 1844 after a period of considerable decline in metal production. Charles was a real-life Poldark – insisting that the apparently dwindling seams of copper be followed to the bitter or fruitful end – and his skills saw Dolcoath (known as the Queen of Mines) become the largest, deepest and most productive mine in Cornwall, with its principal shaft eventually reaching a depth of 3,300 feet (1,000 m) below the surface – and incidentally taking the miners between 2 to 3 hours to descend and ascend, significantly reducing their working shifts below ground. Thomas was succeeded at Dolcoath by his son Josiah and then his grandson Arthur, taking the mine well into the twentieth century. (Its successor, the South Crofty Mining Company went into administration in 2013).

The point of this digression into Cornish mining history is simply that three more sons of Charles Thomas, Captain of Dolcoath, came to the west of Ireland in the mid nineteenth century and were instrumental in the development of many of the mining activities here, including those on the Mizen. The brothers, Charles, Henry and William arrived by 1841 with their own families – yet more sons – who proceeded to populate, at one period or another, the Captaincies of most of the West Cork activities, including our own Cappaghglass workings and the Derrycarhoon venture.

West Cork Mine Captains: Henry Thomas (left) with his niece and William Thomas (right) with his daughter

The modern age of mining commenced at Derrycarhoon in 1846, under the management of Captain Charles Thomas. Charles discovered no less than six old mines during his preliminary explorations, and recognised similarities between them and the shallow workings of medieval tinners which he knew from his childhood home on the moors of Bolenowe, near Camborne, where such workings were extensive and visible. That’s how we know that this mine had been active in those times. But also, as his brother Captain William records in an article dated 1853:

…In the Derrycarhoon Mountain some excavations have been found, which no doubt were made at a very remote period, as they are invariably designated by the country people ‘Danes’ or ‘Danish Works’, but whether these ancient works were carried on or not by the Danes is not easy to determine: it is, however, an historical fact that the Danes visited Ireland many hundreds of years ago… 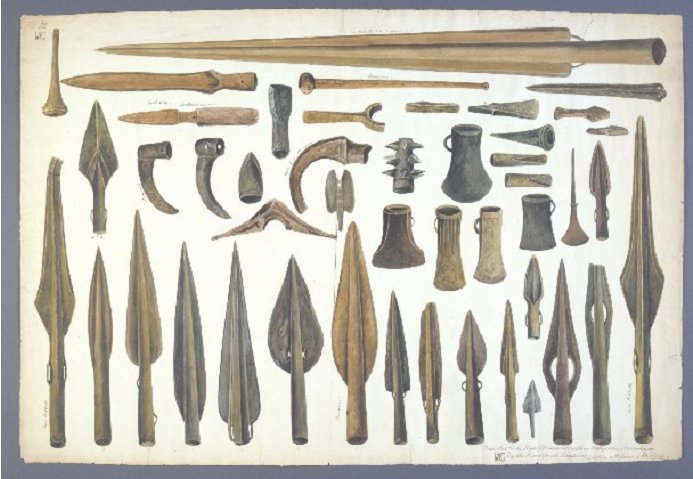 Nineteenth Century Archaeology: Excavated ‘Danish Implements’, 1843 – in fact these finds are likely to be Bronze Age or Iron Age – have a look at  Umha Aois, a Roaringwater Journal post about early metalworking

(Thomas 1853) …One of these singular excavations at Derrycarhoon was a few years ago cleared of water and rubbish; it was found to be 60 feet deep and about 120 feet in length… the lode or vein appears to have been literally pounded away by stone hammers, a great many of which were found in the old works and which were evidently brought from a considerable distance, there being no rock of the same character within some miles… 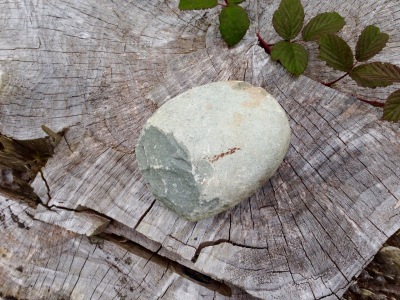 We found evidence at Derrycarhoon of these stone tools, generally known as ‘cobble stone hammers’ and probably originating on the beaches below us: their presence almost certainly confirms that the earliest workings here were Bronze Age, as confirmed by Timberlake and Craddock in a paper of 2013: …The distribution of known occurrences of this type of cobble stone hammer at or near to mining sites in the British Isles correlates with some (but not all) of the areas of near-surface copper deposits, particularly along the west coast of Britain… Recent fieldwork suggests good survival of tools at mine sites, even where these have become dispersed as a result of redeposition by later mining… Hammer stones, or fragments of hammer stones, are more or less indestructible, surviving any amount of later reworking. In most cases the fragments of these tools never disperse far from source, even when redeposited several times. Experience has shown that if a range of these can be found, then the approximate site(s) of prehistoric mining can usually be identified…

Further intriguing finds were made at Derrycarhoon in the nineteenth century, including a ‘notched pole’, a ladder and a trumpet-like wooden tube 75cm in length. Whether these artefacts were medieval or earlier we do not know but, remarkably, the tube still exists and is kept in the spectacular Pitt-Rivers Museum in Oxford (why not here in Ireland?). I could only find a poor quality early photograph of this.

Pitt-Rivers Museum, Oxford – where the Derrycarhoon Trumpet (above) is stored

The topography at Derrycarhoon – which is reappearing now that the forestry plantation has been cleared – is very similar to the Bronze Age mining sites on Mount Gabriel: long, shallow trenches interspersed with pits and shafts. However, the superimposition of medieval and modern interventions clouds the issue. William Swanton pointed out to us a drainage adit driven horizontally for some distance through the bedrock. We assume this is probably the work of the Victorian speculators. 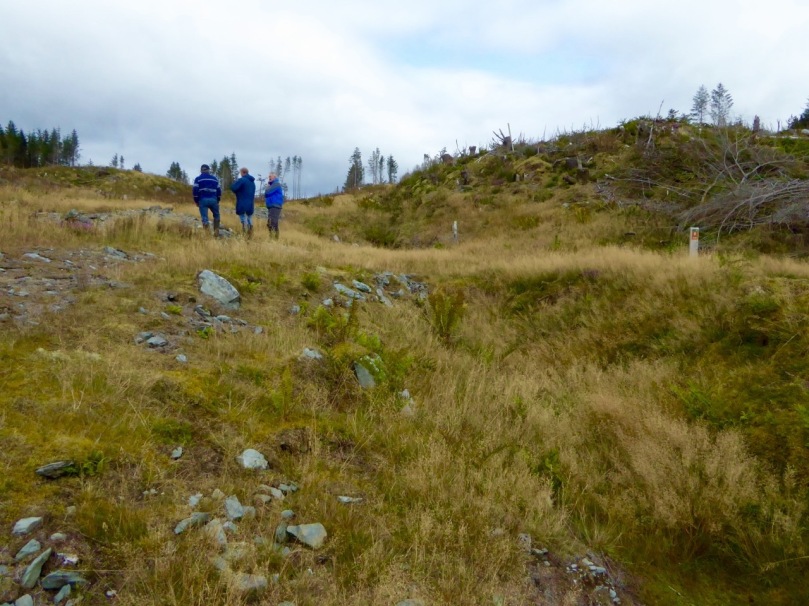 Mine explorers (top) and portal (below)

Captain Charles Thomas evidently raised some 30 to 40 tons of ‘rich grey copper ore’ after the ‘old workings’ had been cleared during the 1850s. Derrycarhoon Mine was listed from 1862 to 1873 under the ownership of Swanton and Company but there is no record of any production at this time nor afterwards, although prospecting trials were made in 1912 by a John McArthur of Glasgow and again in 1965 by the Toronto Mining Company. We found part of a core sample on site, presumably dating from that trial. Then the trees took over… 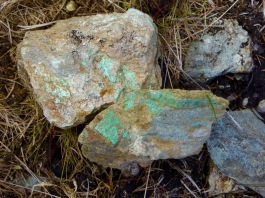 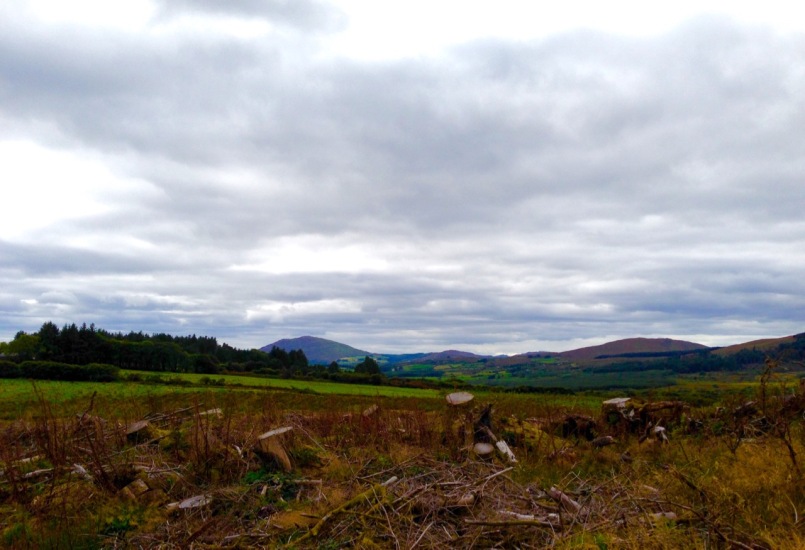 Landscape of spoil: copper traces in the discarded rubble; baryte – and views west to other Mizen mining sites, Mount Gabriel and Mount Corrin

Today, the rough landscape is marked only by green-stained spoil heaps, earthwork undulations and a few recognisable pits and shafts. The litter includes traces of barytes, sometimes a by-product of copper production. If you are not interested in mines or the history of them you will be pretty unimpressed. But, as a microcosm of our own local history, we were fascinated by our exploration of Derrycarhoon and are very grateful to William and his ancestors (were they the Thomases – our own Irish Poldarks?).