After the opening concert… Sunset over Bantry Bay

This year’s Masters of Tradition Festival (which closes tonight) had an unusual headline act – Ricky Skaggs – at its opening gig.. This giant of ‘country’, ‘bluegrass’ or ‘old timey’ music flew over from Nashville at his own expense to join Festival Director Martin Hayes and a host of traditional musicians on stage in the Maritime Hotel, Bantry. Why? Because there are big adventures going on in the world of Irish music today, and this Festival is at the leading edge of all this. Here’s a snatch of Ricky Skaggs: regardless of the film quality it’s well worth watching…

Skaggs, Hayes, Cahill, Schrey and the Brock McGuire Band bring the house down in the opening concert

So, Ricky Skaggs got a good start in life, playing on the stage with the likes of Bill Monroe and the Foggy Mountain Boys (aka guitarist Lester Flatt and banjo player Earl Scruggs) at the age of seven! But at last Wednesday’s concert the biggest chord that was struck for me was Skaggs talking about Ancient Tones – his words for the the common roots of the music that they were all playing together:

“I’ve told people for years Celtic music is the foundation stone for bluegrass, even country music generally — though it is admittedly hard to hear the Irish influence in ‘new’ country today. Certainly, you can detect it in the old country ballads — it’s in the heart of the songs.” Bill Monroe was in agreement, he recalls. Without Irish music, there would never have been a bluegrass movement. “Mr Monroe talked about the old sounds and the ancient tones. He was referring to the sounds from Scotland and Ireland — he believed very much his music was a hybrid of that. He’s right of course — you hear bluegrass and you know the Irish influence is there. It’s in the fiddle and the mandolin, the harmonies and the guitar. In all of it, really.”

That first concert blew us away. We thought that it couldn’t get any better. It probably didn’t, but the energy, enthusiasm and innovation continued through the events of the week. Innovation in Irish Traditional Music? Oh, yes: we didn’t know what was in store for us, but we did know Martin Hayes’ philosophy:

“The main aim of this festival is to expose the unique artistic craft of various musicians. It’s also a kind of response to the fact that the country is full of festivals. I feel it’s important to highlight individual artistry in music rather than putting on a lot of bands that we’re all familiar with. International musicians have been a feature of the festival in the last few years.The festival is called Masters of Tradition rather than masters of Irish music or Irish traditional music because the idea is to have at least one act from abroad to see how other traditions stand in relation to our own. I want to offer something really different. I’m not saying that what I’m doing is better. It’s just a different way of approaching a festival. I certainly don’t see the point in replicating other festivals.There’s only a percentage of the population that gets seriously involved and connected with this festival. I think that’s fine. The festival is about highlighting the uniqueness of each musician’s voice. We try to choose musicians that have found their unique voice. I’m not looking for the latest blazing hot craze. Some of what the musicians express can be quite humble but effective and very touching as well.”

Among the – perhaps – ‘humble, effective and very touching’ performances were Sean Nós singers: carrying the tradition forward from its most ancient roots and presenting it in the simplest form – the unaccompanied human voice, a continuity of cultural expression which has passed through countless generations. We enjoyed the contribution of Máire Ni Cheileachair from West Cork and were impressed, as always, with critically acclaimed Iarla Ó Lionáird who grew up in the musical heartland of Cúil Aodha in the West Cork Gaeltacht. Like Ricky Skaggs, his fame came early: here’s his performance of Aisling Gheal dating from 1978 – when he was 14.

Finola has a link to another of Iarla’s iconic renderings on her post here – The Lament of the Three Marys. Throughout Ireland sacred songs such as this one were felt to function both as prayers and as direct substitutes for the caoineadh (‘keening’, women’s funeral lament) which was suppressed by the Church.

Finola says that I should have called this post ‘Ancient Tones – and Drones’. Iarla Ó Lionáird also heads up The Ghost Trio – which gave us Friday’s late night candlelit concert in Bantry House – Siobhan Long of the Irish Times described her impressions:

…”Drone City” is how Iarla O’Lionaird describes the antics of Ghost Trio, and he isn’t far off. Pipes, Hardanger Fiddle and harmonium coalesce to shape an atmospheric set that speaks more of the space and time inherent in traditional music than it does momentum. And what a welcome alternative take that is.This is a fine reminder of what atmosphere lurks within and without our tunes and songs…

In a sharp swing back to pure tradition we were impressed by The Boruma Trio in Saturday night’s first concert. Straight music played on accordion, fiddle and piano, directly descended from the years when legendary Ceilidh bands such as the Tulla reigned supreme: Martin Hayes himself was reared on this kind of irish music as his own father – P Joe Hayes – led that band for 50 years. Martin wrote of his upbringing in Maghera, County Clare:

…However difficult it is to imagine my own life without music it is impossible for me to even know my father without his music. Music is part of his life in the same way that the land is part of him or in the way that we are Irish. It is inevitable and unalterable, we can never identify ourselves apart from our past as he could never identify himself apart from his music. His music fits comfortably into his life, there has always been balance, he never saw music as being anything other than normal and ordinary, a part of life that fits comfortably with his family, farm, religion and politics. He has a strong passion for music that has been tempered and maintained by equal and loyal devotion to the other interests in his life…

Martin’s earliest memories are of his father getting dressed up and being picked up to go and play somewhere, and in his child’s imagination it was always somewhere far away, exciting and important. On other nights the band practiced in the kitchen and when he had to go to bed Martin would leave the bedroom door open, a little bit, and listen to them play until he fell asleep.

I haven’t room on this post to list all the concerts (the full programme is here) – and we still have one to go! The standard of performances throughout has been consistently high. Perhaps the Harris/Finlay award for the most memorable experience – so far – has to go to Ensemble Ériu. In his introduction of this 7-strong group, Martin Hayes reminded us that we now have generations of young musicians who are very aware of their traditional heritage, but who are also being exposed to mainstream influences such as jazz and minimalism. Degrees, Masters and PhDs are offered in no less than 14 universities and colleges in Ireland at present in traditional music, song, dance, Ethnomusicology and Ethnochoreology. Students with backgrounds or deep interests in the folk traditions are exploring other contemporary voices and this ensemble – or ‘Project’ as its progenitors Jack Talty and Neil O’Loghlen prefer to call it – is a step in the New Directions so keenly being watched by Martin Hayes:

…The septet draws on a wealth of creative sources to perform arrangements of Irish traditional music rooted in the styles of West and North County Clare. This group brings together a chamber ensemble of some of Ireland’s most exciting young musicians from a range of performance backgrounds. The result is a unique combination of the fresh and familiar, a soundscape that is creatively progressive, yet rooted in tradition… (from the group’s website)

It’s hard to describe the musical experience that Ériu gave us last night. You’ll get some impressions from this film.

It brought to my mind the works of Steve Reich and Philip Glass, but was nevertheless unique. Who would have thought that such creative things could happen in this quiet West Cork backwater? It was stimulating, energetic – dynamic. I wonder what Martin has in store for us next year? 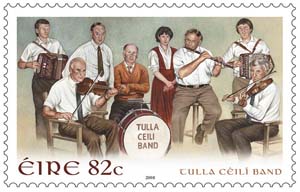