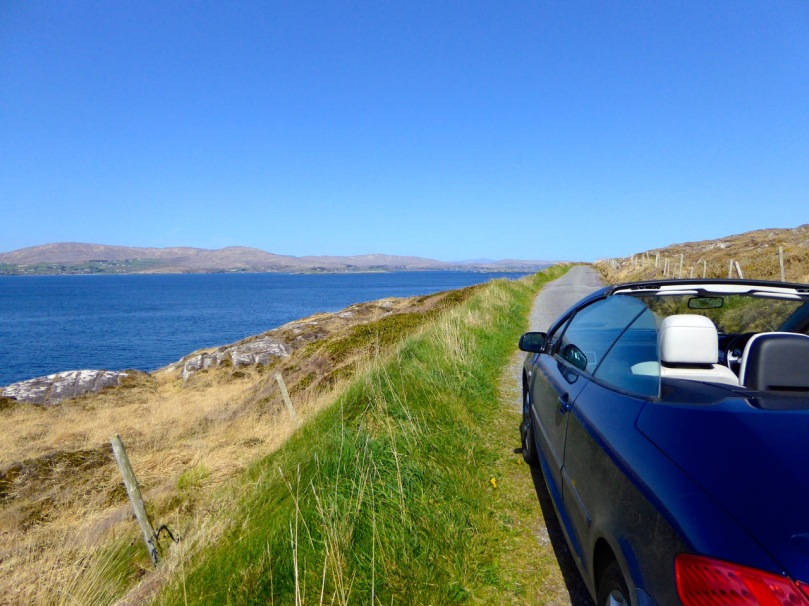 This is how you sightsee in West Cork!

Ladies and Gentlemen, meet Susan Byron! Susan is the face behind Ireland’s Hidden Gems, a custom travel service for visitors to Ireland, and she and I met last year when Robert and I spent a week in Clare. Susan loves nothing better than to hop in her car and take off for a few days to some part of Ireland she wants to explore or re-explore. There are very few places she hasn’t seen, but I soon discovered that the Sheep’s Head was one of them. She has been to the Mizen before but hadn’t seen some our OUR hidden gems. In short order we decided that a visit must be organised, and a couple of weeks ago she arrived, bearing Burren lamb, bottles of wine, and an infectious enthusiasm to see everything.

The 17th century Bardic School on The Farranamagh Loop walk

Now if someone who runs a bespoke travel agency wants to see your piece of paradise, well, you’re going to put your best foot forward. Fortunately, this isn’t a problem in West Cork – it’s pretty well a fail-safe place to show off. Susan spent her first day whale watching (something we promise ourselves to do soon) and exploring the area east of Skibbereen. On day two and three she was all ours and we spent the first day on the Sheep’s Head and the second on the Mizen. 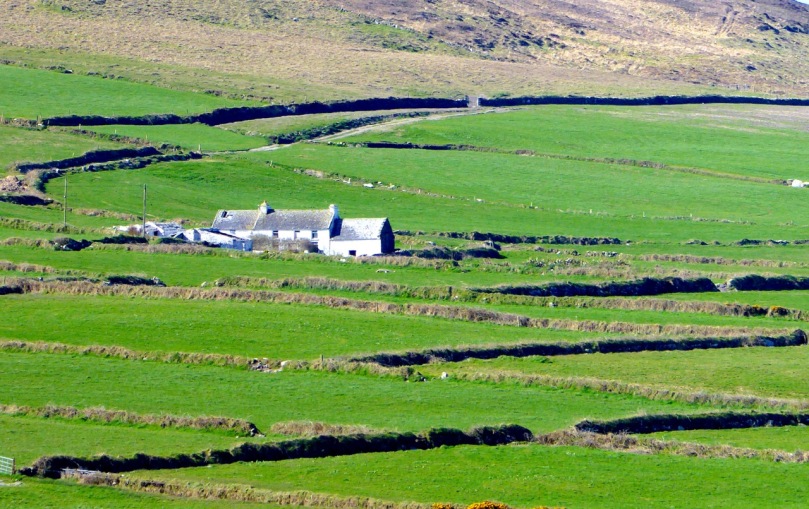 First of all, travelling with Susan is a hoot. She’s got a hot car, a ready laugh, an inexhaustible supply of stories, insatiable curiosity, and a real passion for Ireland. She is amazingly well-read – she knew the dates of the castles before I could tell her and was already familiar with what most tourists want to to see and do in West Cork. So this was a cheerful, companionable time of exploration, chatting, coffee and scones, hiking and sightseeing.

Mist floats in at Tooreen, start of the Lighthouse Loop 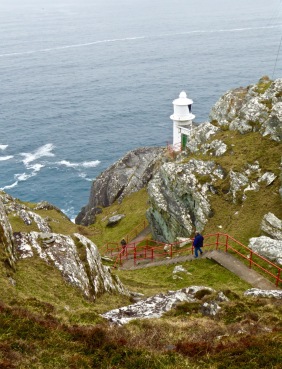 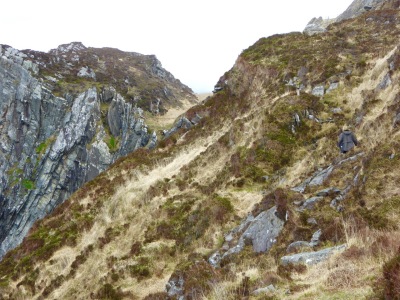 Can you spot a Susan?

Our Sheep’s Head day took in two loop walks – the Farranamanagh loop and the lighthouse loop. We started off in drifting mist but the sun came out in the afternoon and soon we were shedding coats and applying the sunscreen. After a stroll around the lovely Farranamanagh walk (famous for its 17th century Bardic School) we had lunch in The Creamery in Kilcrohane and browsed in the Sheep’s Head Producers Market. We bought eggs from a farmyard, said hello to contented alpacas, and took innumerable photos of the killer views. 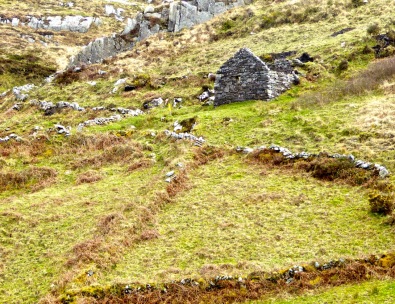 Not for the faint of heart

The Lighthouse Loop offers unparalleled vistas at the end of Sheep’s Head – south to Mizen Head and the sweep of the West Cork coastline, and then, as you round the end, north to the Beara and to the Iveragh Peninsula (Ring of Kerry) beyond it. The trail has some steep sections and clings to a cliff edge for part of the northern stretch. It, and the Farranamanagh Loop are but two of the many waymarked trails that crisscross the Sheep’s Head. Each is as rewarding as the next and you could easily spend several days exploring this one Peninsula.

The Mizen, of course is OUR peninsula and we are always delighted to introduce it to friends. The weather was brilliant so we were able to drive in Susan’s cool car with the top down. (In my next life I want to come back as a blonde with a convertible.) Three Castle Head was at its most spectacular, with the water that deep azure blue that people who don’t live here have a hard time believing is real.

The Three Castles: it’s love at first sight for Susan

The curtain wall and the lake

Spring was bustin’ out all over so the air was heady with wildflowers and the fields full of newborn lambs. The drive on the north side of the Mizen is as jaw-droppingly gorgeous as any stretch of road in Ireland – the only difference is that it’s empty. We met not a single car, which enabled us to stop where we pleased to survey the scenery or take photos.

Susan wound up her time by conducting some retail therapy in Schull. No better place!

She has posted numerous photographs on her Facebook page and even used the phrase “possibly the most beautiful place I have ever been….” about Three Castle Head. That’s how I feel about that magical place – but when someone who has seen everything Ireland has to offer says it, maybe, just maybe, I’m not delusional after all.

Susan at the cairn. Three Castle Head on the Mizen