“And now, Sir Hare, good-day to you. God guide you to a how-d’ye-do with me…” (from the Middle English poem – Names of the Hare – translation by Seamus Heaney)

You may know that I am a Hare fanatic. Every day as I travel along through West Cork – driving, cycling or walking – I am scouring the fields and hedgerows in the hope of seeing one of these shy and elusive animals: very occasionally my watchfulness is rewarded. Last year I kept a Hare Diary… on the last day of December I counted up: I had seen only six, and two of these were in other parts of Ireland. Yet, when I first visited Ballybane West – just over the hill from here – back in the early 1990s I saw them on most days; one early morning then I looked out of the window and there was a whole luck of Hares running around the field beyond the house – at least ten of them.

A luck of Hares by Christina Jasmin Roser, feltmaker

Where have all the Hares gone? I can’t answer that, but I can tell you that there are a whole lot of Hares in the Heron Gallery, Ahakista at the moment: Annabel Langrish and her husband, Klaus have mounted an excellent exhibition of art and craft works based around images of the Hare.

The exhibition brings together the work of several artists from the West of Ireland: paintings, drawings, feltwork, fabrics, papier mache, jewellery and ceramics. The whole makes a really attractive assemblage, but any one of the works on display – all of which are for sale – would be an elegant addition to your own art collection! I would readily bring them all here to Nead an Iolair but – as we already have numerous images of Hares around the house – Finola has put an embargo on further Hare imports (just for the moment).

Yours Truly was asked to say a few words about Hares at the exhibition opening: a wonderful portait of William the Hare by Sylvia Parkinson looks on

All the works in the Heron Gallery show bring out the magical qualities of this special animal. Mostly it is Lepus Timidus Hibernicus which is depicted: the Irish Hare. This belongs to the Mountain Hare species, related to Arctic Hares. Irish Hares don’t turn white in the winter but they do moult to a paler colour, and sometimes they have white patches then. There are also Brown Hares in Ireland: these were imported from Britain to add to the game stock on landlord estates from medieval times onwards.

Three ceramic Hares by Annabel Langrish, from the exhibition

Although the Irish Hare has been ‘legally protected’ since 1930 – and is listed as a protected species under EU legislation – it can be hunted under license, and Hare coursing is still permitted. This seems anomalous to me: those who support Hare coursing claim that the animals do not suffer. They are captured from the wild, caged (usually for several weeks), and released onto a course where they are chased by muzzled Greyhounds. After this they are put back into the wild. As their name would suggest (Lepidus Timidus), Hares are nervous animals and there can be little doubt that they do suffer stress through the ordeal. Many die before being released. Coursing has been banned in the UK since 2005. There have been moves to have Hares fully protected in Ireland.

The Hare’s Revenge: Dean Wolstenholme’s painting of Greyhounds coursing a Hare (right), while in the medieval woodcut (left) a Hare plays a tabor. The tabor is the forerunner of the Irish bodhran: I am reliably informed that the best skin to use for a bodhran is that of the Greyhound!

The Hare is a most ancient animal. Fossils have been found dating from Pleistocene times showing that the Hare has not changed or developed in three million years: presumably it is just so perfectly integrated to its environment. It also occupies a prime place in our own mythology. Hare is the archetypal Trickster figure in many cultures – helping to create the world, to bring fire to humans, generally being mischevious and getting into hopeless scrapes, but always coming out on top: just like Warner Brothers’ Bugs Bunny in fact – who is, of course, a Hare! Bugs (my favourite cartoon character) is loosely based on the Br’er Rabbit stories by ‘Uncle Remus’ – collected in the 1870s by Joel Chandler Harris from the oral tradition of the plantation slaves in the Southern United States. Br’er Rabbit (in America Hares are known as Jackrabbits) has his origin as a Trickster figure in African folk tradition. 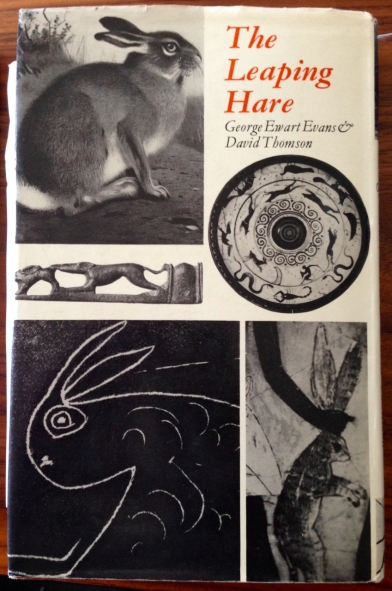 I have gleaned most of my Hare lore from this much thumbed edition of The Leaping Hare by George Ewart Evans and David Thomson – published by Faber – which I acquired when it first came out in 1972. If you have an evening or three to spare I will happily regale you with tales of Hares gathered from far and wide and recorded in these pages. 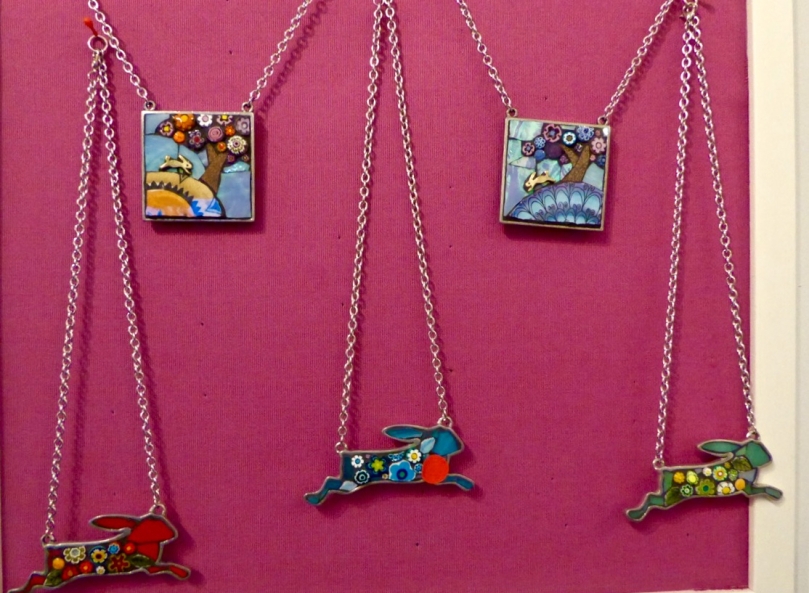 When I lived in Devon, on Dartmoor, I was fortunate to have around me many examples of a symbol known as The Tinners’ Rabbits. Chagford was a Stannary Town – a place where refined tin was assessed, coined, and sold and there was a story that the symbol was a badge of the tin miners. It depicts three Hares (not Rabbits) in a circle: each Hare has two ears, yet there are only three ears in total. A bit of a riddle, perhaps – but one which has been found all over the world, as a project carried out by Chris Chapman reveals. In Chagford’s medieval church (and in several others in Devon and elsewhere) there is a roof boss carved with the image. 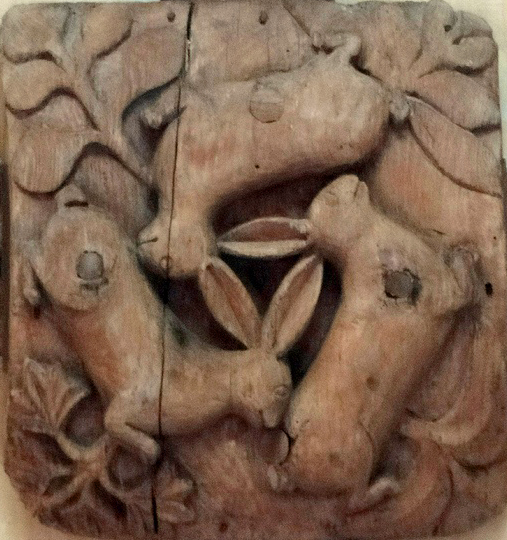 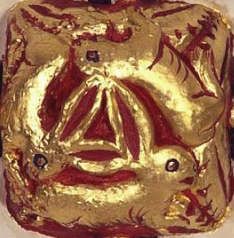 There doesn’t seem to be any real evidence to connect the Tinners’ Rabbits symbol to the tin miners – however, there is a surviving superstition in Cornwall and in Ireland that if you meet a Hare while on your way to the mine (or, in some places, when you are going fishing) you turn around and go home!

Part of the universal folklore of Hares reminds us that it’s the Hare in the Moon we are seeing above us, not the Man in the Moon. And… I know you thought it was an Easter Bunny that brings the chocolate eggs – in fact it’s the Easter Hare! The Saxon spring festival of Ēostre celebrated a hero-Goddess who had a Hare as a companion… Well, that’s one of the many interpretations you will find of this moon-based festival.

It’s not Easter now – it’s July – but you can go and see this exhibition on the Sheep’s Head for the rest of this month, and enjoy the beautiful gardens there as well. If, like me, you are a Hare fan, then don’t miss it! 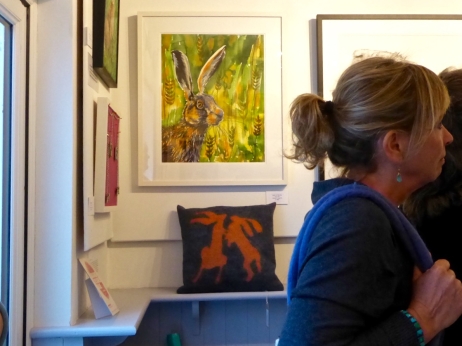