Everywhere I go in West Cork I take pictures of gates.* Most, nowadays, are galvanised metal, rather than, as in the past, forged by a blacksmith taking satisfaction in making each piece unique. Our friend David Ross of the Top of the Rock Pod Páirc & Walking Centre collects and preserves these wrought iron gates where he can. The first two photographs are kindly supplied by him. At the top is an orchard gate he found lying in a ditch and restored – note the blacksmith’s marks of an X and four dots. The gate below is also his, salvaged from the site of an old monastery in Castlemartyr.

Another friend and fellow-blogger, Pat Crowley of the encyclopaedic Durrus History, shared his photographs with us – see below. This kind of gate is called a ‘band iron trinity’ and this one was made in the 1930s. The blacksmith was an O’Donovan from Kilcrohane or Kealties. 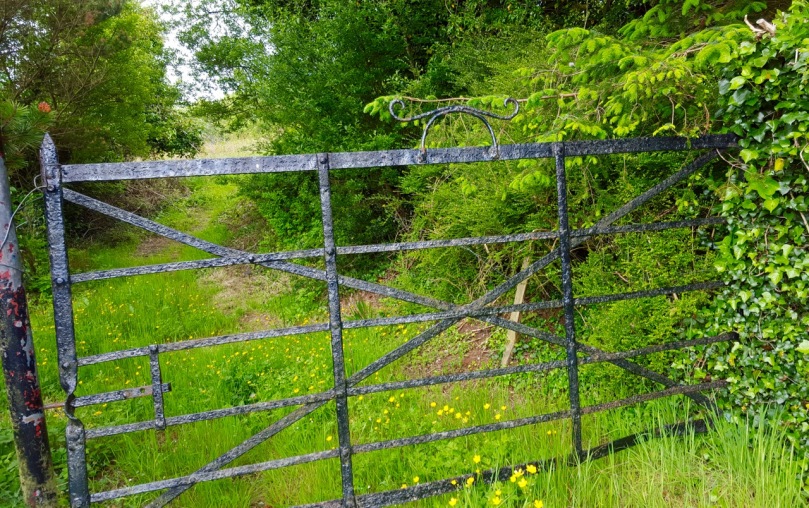 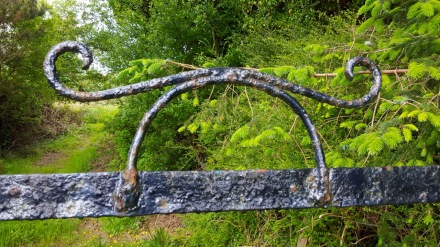 Such gate-dedication is rare: large wrought iron field gates are often left to rust, or cast aside in favour of an easy-care option. But you can still find them, hanging in there, often by a thread, and doing their job. Their days are numbered so we enjoy them while we can. 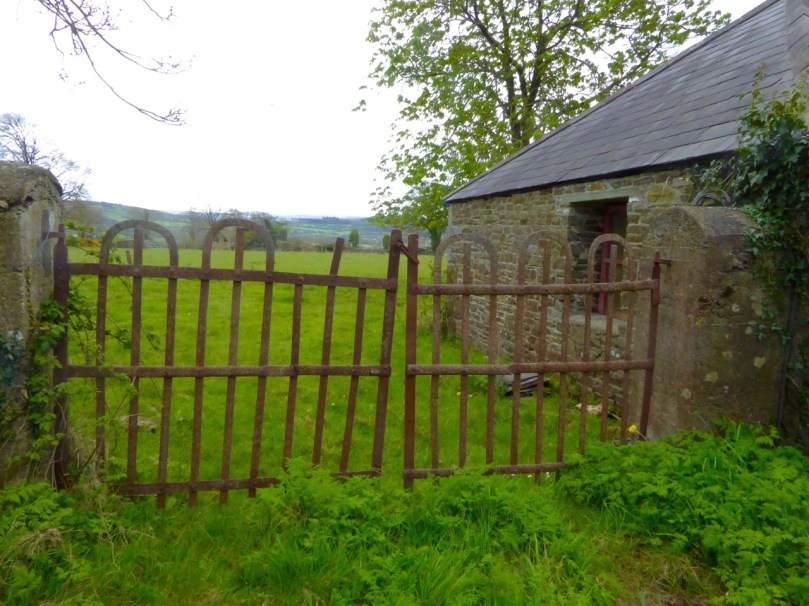 Smaller gates fare better. Perhaps maintaining them isn’t as big a commitment. Garden gates establish the atmosphere the homeowner wishes to evoke – or in the case of abandoned houses, once wished.

Here are details from a pair of matching red gates near us – a large entrance gate and a smaller side gate.

Graveyards are fertile sources of wrought-iron. The entrance gates still stand sentinel, sometimes double gates, but often single, as most coffins were shouldered in. 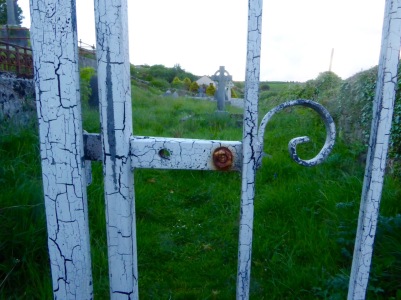 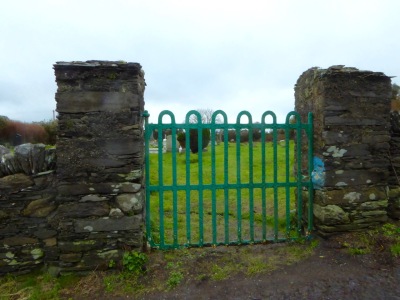 Long-disused church yards with little walls separating off the church precinct from the surrounding cemetery or from the vicarage, feature overgrown gates with fetching designs. 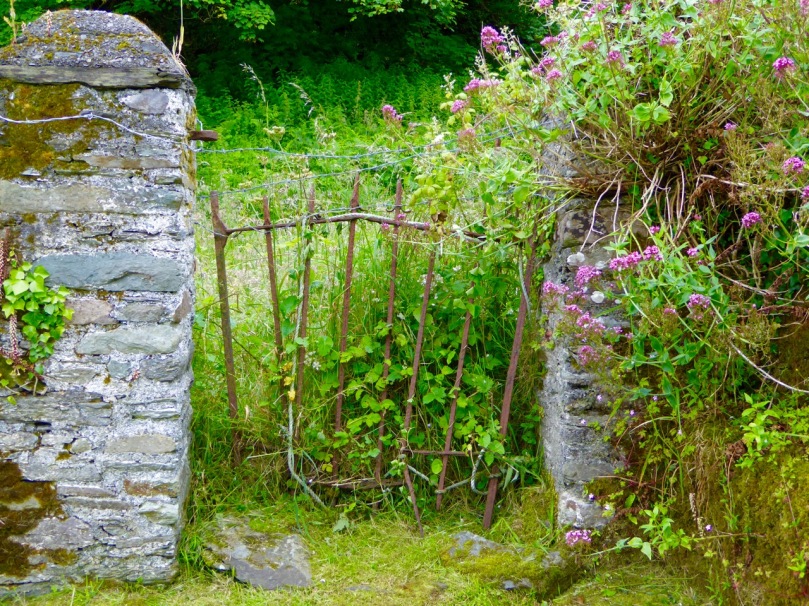 Holy wells are accessed through through special gates, many dating from the mid-20th century, when holy well sites were re-furbished.

The boreens leading to the well can be accessed occasionally by edging through a kissing gate. This one is not wrought iron, but I like the little details on it.

Still, the common field gate manages to establish its own character, and often acts to frame a vista across a valley, or a tantalising glimpse of old stone farm buildings. The vast majority now are galvanised metal, but some have been painted, or hung between substantial stone pillars.

Most are secured using a highly technical local form of lock called the loop-a-bit-of-rope technique. Seems to baffle the cattle, who stay inside, but it’s great for your friendly wandering archaeologist wanting to investigate a pile of rocks in a field.

The ultimate, of course, is to dispense with the gate altogether and simply use the loop-a-bit-of-rope lock on its own. 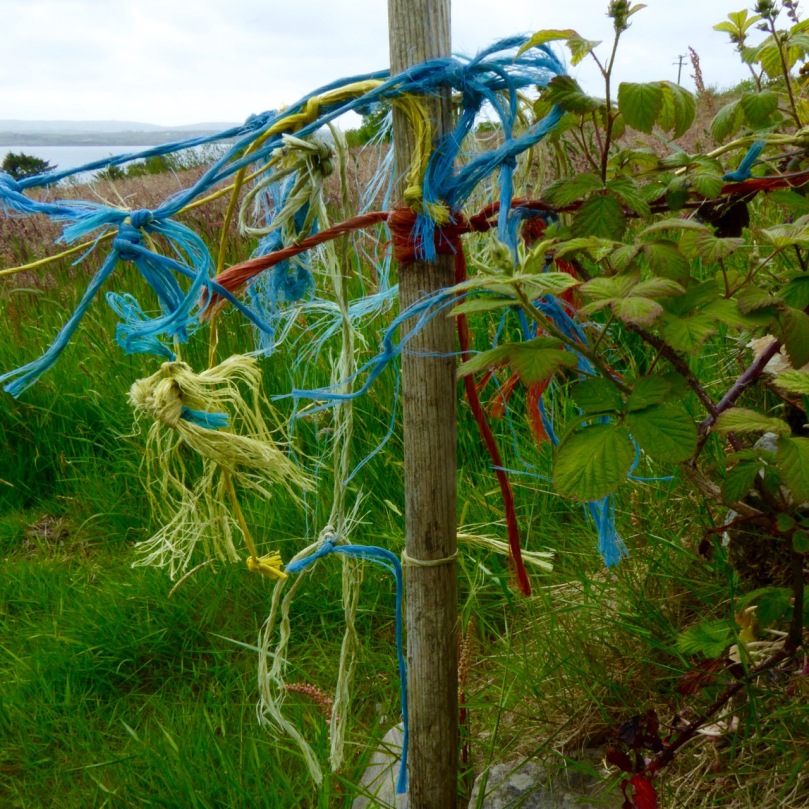 Will this gate, below, sadly neglected, be replaced with a wooden or galvanised model? Perhaps new owners will see what they have and try to salvage it. But it does look like it’s on its last legs.

When we decided we need some wrought iron for our own entrance, we went to Cronin’s Forge near Durrus. Working in time-honoured ways they make gates and signs that will last the course.

Fitting to end with a church gate, as this has been a hymn to the West Cork Gate, in the form of a photo essay. This is one of my favourites, access to and guardian of so many treasures: the gates to St Barrahane’s Church in Castletownshend. Like so many aspects of this place it is elegant and unique. The photograph was taken by my 11-year old niece, Ava. 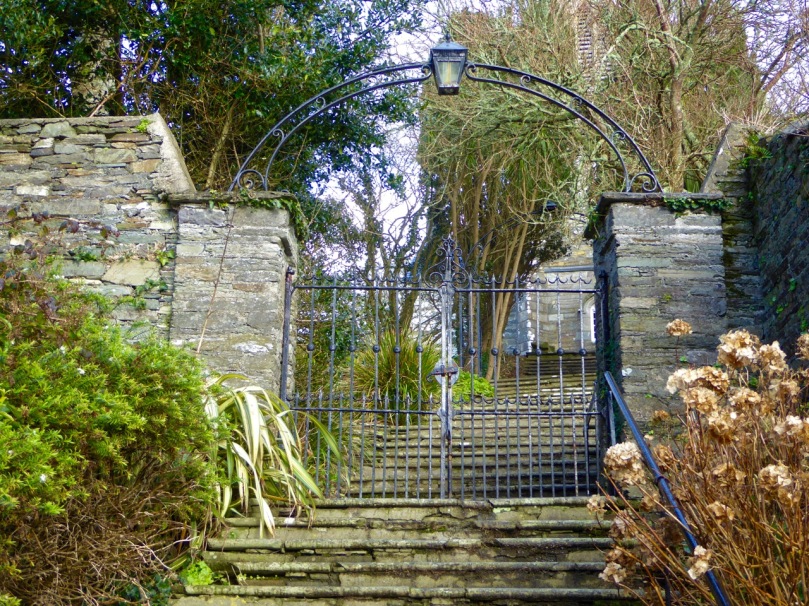 *My apologies to those of you who followed a broken link to this page earlier. At an early stage of writing, I pressed ‘publish’ rather than save (easy to do!) and then had to delete the post. I hope you came back!