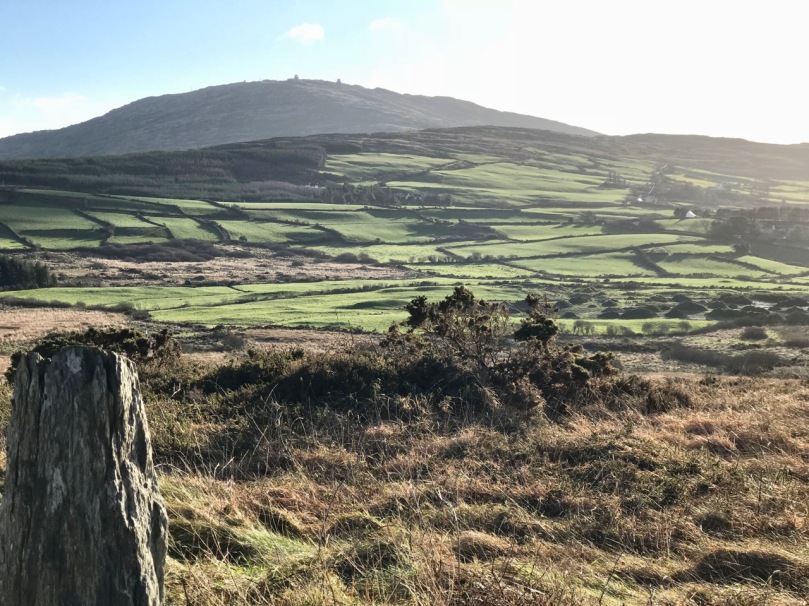 It was a perfect start to the year – a crisp, transparent January day when the whole landscape was set out before us in meticulous sunlit detail. We determined that our own Mizen terrain would begin our 2018 posts. Finola reached for her camera; I took down from the bookshelves an old stalwart: Northside of the Mizen by Patrick McCarthy & Richard Hawkes, 1999, and we headed out for Dunbeacon and all points west!

. . . Welcome to the Northside ‘The Northside’ is tucked away in the remote and most south-westerly point of Ireland. It is a place of wild beauty, with hills to the back, overlooking Dunmanus Bay. In the past it offered a harsh living. where man has protected himself from the elements blown in from the Atlantic and where one person often relied on another for survival. It gave a camaraderie that can rarely be found today.

(all quotations are taken from Northside of the Mizen)

. . . January A new year and the cycle of passing months began again. With the weather at its worst, there was little to do on land or sea. Jobs around the home and haggard, or repairs to ditches and gaps on the farm were carried out. The house provided shelter and it was a time to be by the warmth of the turf fire for the long nights, whether at home or out scoriachting.

The heart of the home – Northside kitchens. Lower picture, Bridget McCarthy 1977. All early photos are taken from Northside of the Mizen

. . . Scoriachting Throughout the year, scoriachting (visiting neighbours) at night was the custom and in the winter the warmth of the open fire was the focus for games, songs and stories… Only Saturday night was not a night for calling to friends, as you would have to get ready for Mass early next morning. Different houses in the townlands would be known for their own form of entertainment; for example, the Coughlan’s (the Kit’s) for talk of people and who was related to whom, the Courcey’s and the Scully’s for cards, the Hodnett’s for games and tricks to test your wits and for a bit of harem scarem. 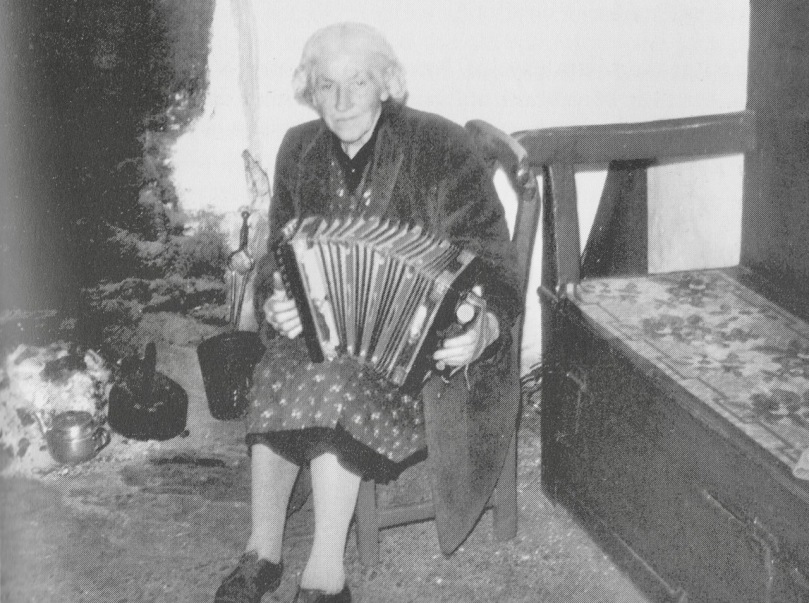 Harem Scarem? Upper – ‘Agnes O’Donovan at her fireside, 1969’ and lower – ‘Michael and Tom McCarthy out scoriachting’

. . . If you were a pipe smoker and you walked into a house where a man was smoking, he would offer you the pipe for a few pulls. When handing the pipe back you’d say, “The Lord have mercy on the dead.” Women would occasionally smoke a pipe but preferred snuff. Often the night’s scoriachting would start with the Rosary and two candles would be lit. One Sunday night in the nineteen-thirties, at the O’Donovans in Dunkelly a lad pegged (threw) a cap at one of the candles and quenched it. Danny O’Donovan said that it was a queer thing to happen in the house of God, to which the reply came, – “There’s a great deal of difference between you and God!” That was the end of the Rosary that night! 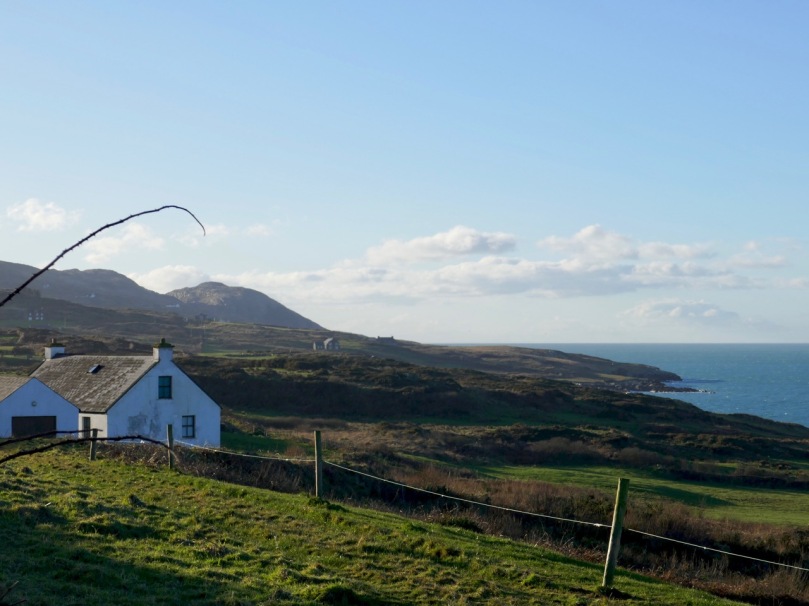 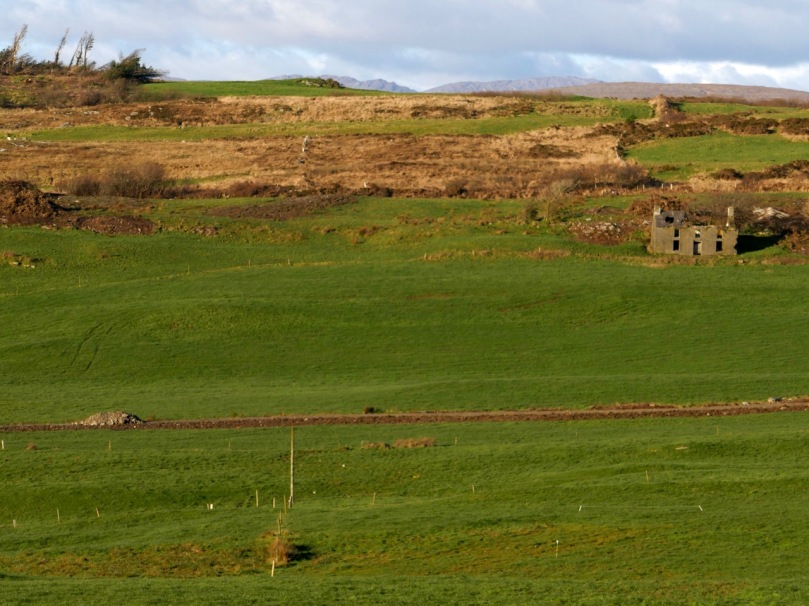 . . . A night would start with games, blackguarding (horseplay) and sometimes dancing, then progress on to songs and poems. Storytelling was the preserve of an evening by the fire. With the flames flickering and the wind and rain howling like the Banshee, the imagination of the storyteller and his forebears was let loose on a delighted and spellbound audience of children and adults alike. this, in turn, would lead to stories of a more superstitious nature, into a world of small folk, púcas (sprites), mermaids and of people’s misfortune when they interfered with the fairy ways. 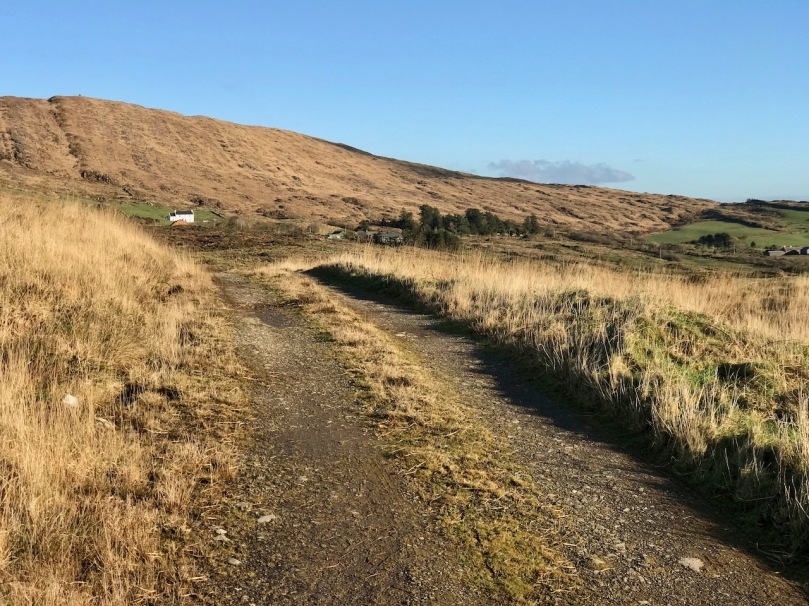 . . . If the night was black as you made your way home and you couldn’t see where you were going, it was a good idea to call on the little people to help you. To do this you took a piece of clothing off, turned it inside out and put it back on. That gave you the sight back and you would find your way. It was also wise to carry a twig of hazel as it would protect you from the not-so-good little folk and get you back home safely!

. . . The last job of the night was to build the fire up and cover it with ash, so as to keep it red for the next morning. It was bad luck to let a fire go out, and it was said that many of the hearths had the same fire for generations.