It will add an hour to your journey (plus whatever time you spend exploring) if you are on the M8 between Cork and Dublin. Well worth it to visit Ireland’s most splendid Tudor manor house. If you are coming from Cork, leave the M8 at Cahir and go straight across to Carrick-on-Suir. From there you can rejoin the motorway by going north to Urlingford. Vice-versa, of course, if your journey is in the other direction.

Thomas Butler, 10th Earl of Ormonde, 3rd Earl of Ossory, Viscount Thurles is the key player in our story. He grew up with Elizabeth, daughter of Ann Boleyn, whose paternal grandmother was of the Ormond dynasty in Ireland. It’s a bit confusing when researching Ormond history, as the ‘e’ on the end seems to have been added after 1628. Cousins Thomas and Elizabeth had a close friendship: some say that they were lovers. It’s certainly the case that In 1588 the Queen bestowed on Ormond what a poet described as áirdchéim Ridireacht Gáirtéir, ainm nár ghnáth é ar Éirionnach (“the high honour of the Knighthood of the Garter, a title unusual for an Irishman”). And Thomas built his new Tudor styled house on his estates at Carrick-on-Suir, Co Tipperary, as a gift for the Queen: a place for her to be royally entertained when she visited Ireland. (For more on the Butlers in Ireland, read this)

The evolution of a castle – 1. In 1328 the Ormond family stronghold was a fortified house and bawn accessed from the river via a watergate – seen in the foreground (and shown in the model, below, although from a later period). Note the walled garden and estate cottages, town walls and gate tower beyond.

The evolution of a castle – 2. By 1450 the castle has been extended with the addition of two large tower houses, the ruins of which are evident today (below).

The evolution of a castle – 3. This sketch shows more or less what you will see today: Thomas Butler’s 16th century Tudor mansion has been built in front of the tower houses, creating a courtyard behind. Fragments of the earlier structures remain on the river elevation (below).

The Tudor house was magnificent (and continues to be impressive in its partially restored state, maintained by the OPW). It was unlike anything else that had been seen in Ireland previously. Notable features include plaster ceilings and cornices, which are being faithfully restored over time. Because of the delicate nature of the fabric, photography is not permitted within the house at present. The view below is of the museum section, which contains some early features and artefacts. 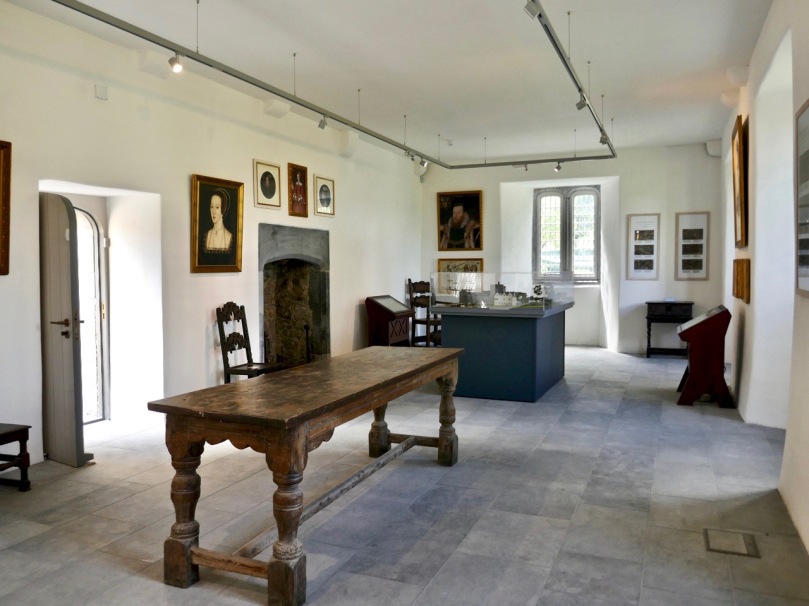 These photographs (from the museum) show the house in its dilapidated condition prior to being taken over by the Office of Public Works in 1947. Full restoration is an ongoing ‘work in progress’. Although that progress might seem slow, it is being carried out to the highest standards, and the castle is a great historical asset for Ireland. 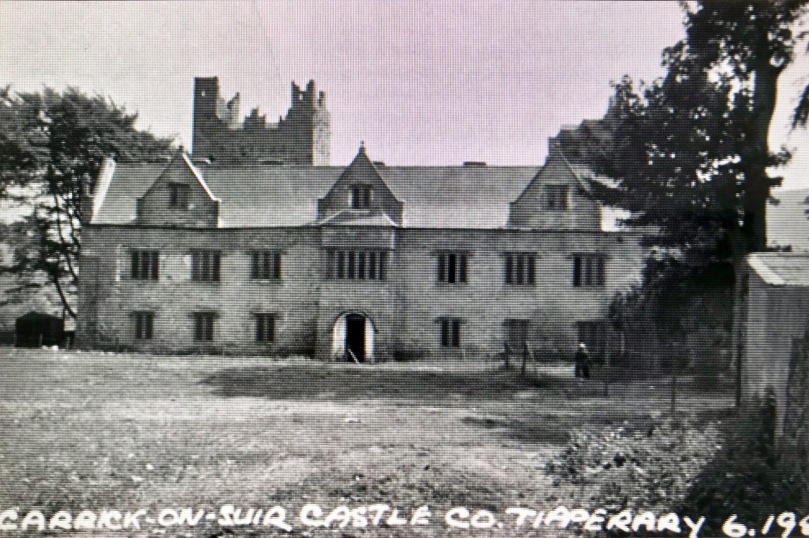 Another early archive photograph, showing the house prior to restoration

In fact the story behind Ormond Castle is a poignant one. Thomas Butler’s admiration for his childhood companion who became his Queen could well have been unrequited passion. Elizabeth planned to visit Thomas at Carrick-on-Suir on several occasions, but each time affairs of state detained her. She died in March 1603, having never visited Ireland, but leaving in her wake the dreadful effect of generations of martial law and embittered feelings which continued into modern times.

In the hallway of Ormond Castle the depictions of Thomas Ormond and Queen Elizabeth hang facing each other – what should we read into the symbolism of this? Perhaps the model in the museum (below) depicts the imagined meeting that Thomas had always hoped for?