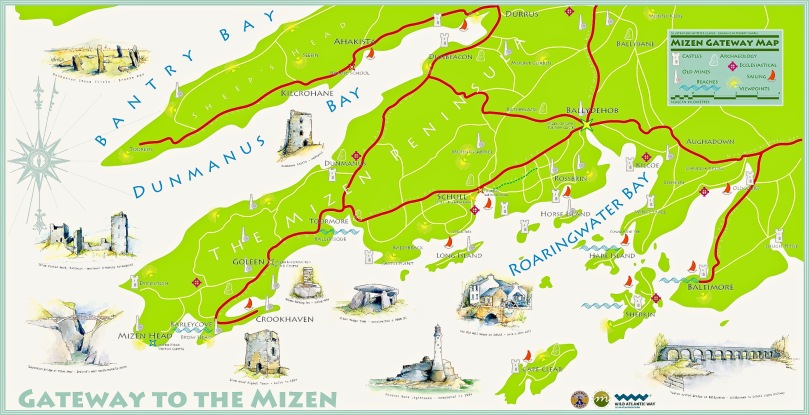 Here’s the Mizen Peninsula shown on a map drawn by Robert for the Bank House tourism centre in Ballydehob and embellished with Peter Clarke‘s exquisite watercolour sketches of just some of the places that should not be missed by visitors to West Cork . . .

. . . And here is another rendering from Peter of one of the ancient sites that everyone goes past when travelling to the far west: possibly one of the most accessible pieces of archaeology on this section of the Wild Atlantic Way. It’s the Altar Wedge Tomb at Toormore Bay. 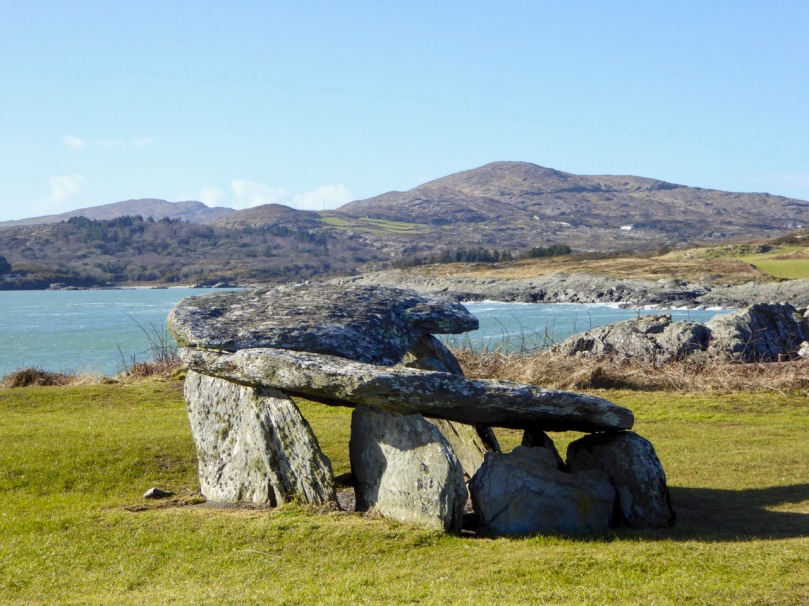 It’s early February, and Imbolc has passed. That means that Springtime has officially started here in Ireland. Sure enough, we looked out over a sunlit Roaringwater Bay this morning: soon we were heading out towards Goleen, Barley Cove and all points west. We stopped at The Altar and had it all to ourselves. You can see here that it’s orientated towards the Mizen Peak – that sharp little pyramid which is right on the centre of the picture – and lies to the west. For me, there’s a perfectly natural symbolism about placing the dead in a tomb that is aligned on the rising and the setting of the sun: that’s something we still do, several thousand years on! 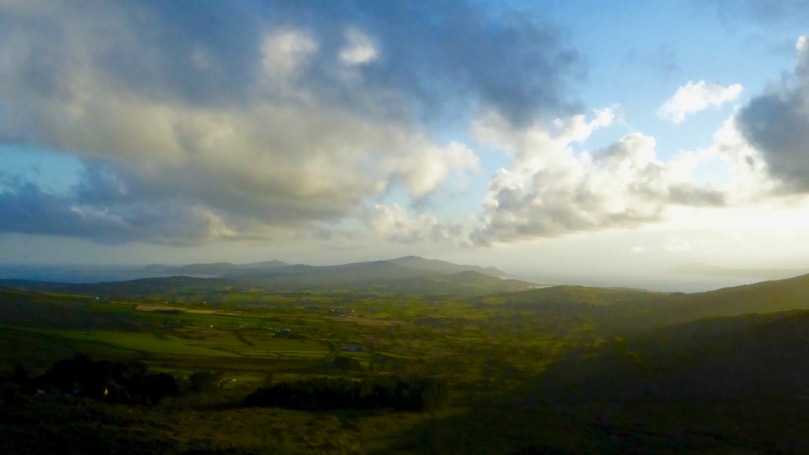 The upper picture, taken on the Winter Solstice, shows the Mizen stretching away from the heights of Mount Gabriel: the Mizen Peak is the little pointed blip just left of centre. The lower picture looks across the wetlands behind the sand dunes at Barley Cove, and was taken today in the Spring sunlight: the Peak is clearly visible as the highest point. I believe that our forebears attached great importance to high places, as many stone monuments and Rock Art often seem to be placed in the landscape with commanding views towards hilltops. Mike Wilson’s site Mega-What sets out his detailed studies of the orientation of ancient sites within the natural landscape. Here is his analysis of the setting of the Altar Wedge Tomb. 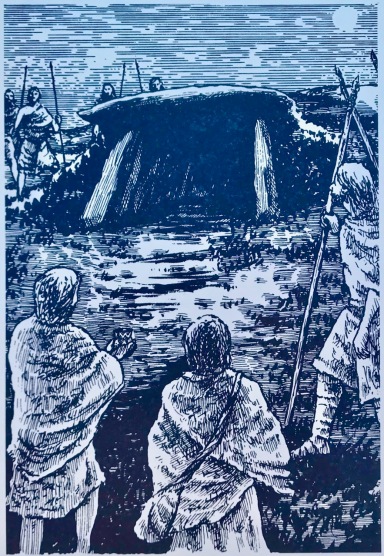 I am always alert for the ways in which our special sites are interpreted for us. I created a bit of a storm a while back when I commended the signage which has been put in place along the Wild Atlantic Way using visually strong corten steel elements (above left) supplemented more recently by (in my opinion) very well designed information boards. The image on the right above is from an earlier OPW board which explains the possible early use of the wedge tomb, while the images below show the new signage, which features the later use of the tomb as a Christian altar during the Penal times (hence the name: The Altar), with a drawing by Sam Hunter. I am struck by the way this monument has been a focal point for differing rituals spanning countless generations.

When writing about archaeological subjects I am always on the lookout for the way that antiquarians saw the sites which we are familiar with today. I had hoped that George Victor du Noyer – the subject of an excellent recent exhibition in Cork’s Crawford Gallery – might have drawn this wedge tomb when he travelled the country for the Ordnance Survey during the early nineteenth century: he may well have done, but the annotation and cataloguing of his vast legacy of work has yet to be completed and I have not found such a record. His drawings below are not of The Altar, but a portal tomb, Ballybrittas in County Wexford. Portal tombs (sometimes known as dolmens) share similarities with wedge tombs, but are earlier, dating from between 3000 BC to 2000 BC, while wedge tombs tend to be associated with the Bronze Age, which followed this period.

Cremated remains were found in Altar Wedge Tomb when it was excavated in 1989 by Dr William O’Brien, now Professor of Archaeology at UCC. We can never know exactly what the significance of these impressive structures was to those who built them. For me, I’m pretty sure that it was connected with their relationships to, and respect of, the landscapes which they inhabited, and which they invested with meaning. They must certainly have paid heed to the passing of the seasons and the continual cycles of nature, and their closeness to all of this must have given them an inherent knowledge of the paths of the sun, moon and stars. Above all, our ancestors had to understand and appreciate the environment around them, and make it work for them. In a practical sense, certainly, but also in terms of the stories they might pass on about the meaning of places.

Above – the magical landscape of the Mizen: we will never tire of it

The tailpiece picture, which is from Wikimedia Commons, attributed to Lukeoc88, is a remarkable timeless view of a human construction in the setting of our Universe: Altar Wedge Tomb under the Milky Way.