I confess I’m stretching things a bit here: the 297m peak in the townland of Letterlicky, West Cork, fits well enough into my definition of mountains – anything above the 200 metre contour line. But is this one on the Mizen? We think of our own village of Ballydehob as being ‘The Gateway to The Mizen’ in the south-east, and it would be logical to have another ‘Gateway’ at Durrus, where the northern coastline of the Mizen meets the Sheeps Head. If you draw a straight line between these two points, then today’s subject misses out. But – there are no straight lines in nature, and this peak is a continuation of a natural ridge line that rises down on the Mizen near Mount Corrin and runs east. 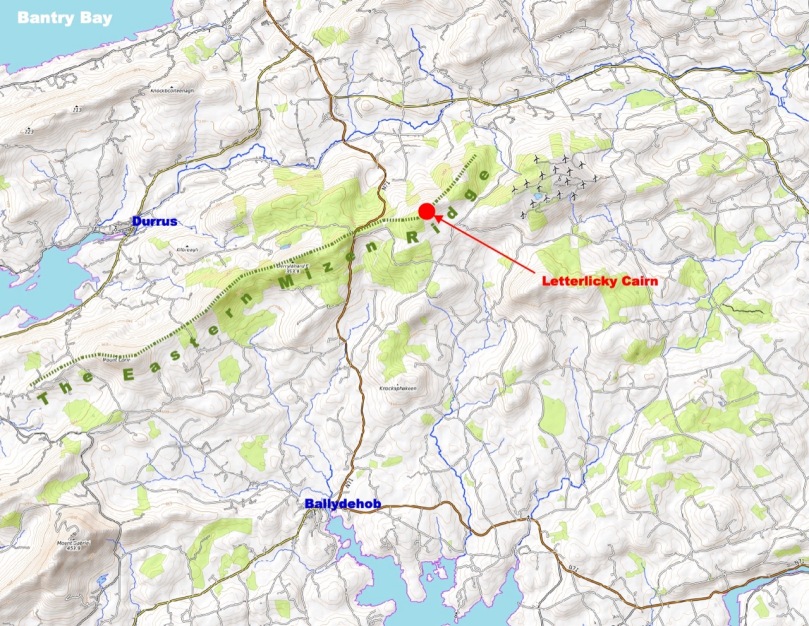 But if you are uncomfortable with my concept of what is or isn’t the Mizen, just go with the subtitle of this post: The Old Bog Road. We found Letterlicky Cairn quite by accident as our exploration set out to follow a trackway that we had often passed, on the high road to the north of Ballybane West. We had no idea where the track would take us, but it’s very well defined, roughly paved and probably quite old. As we journeyed up into the hills, we could see that the track was there to serve peat workings which must have been used for generations. The extent of the peat workings – and the line of the old road serving them – show up well on the aerial map view below.

It was a sunless mid-March day when we set out: the wind was in the east and there was little colour in the landscape. There were, as yet, few signs of spring. We could see the ridge in the distance and, happily, the track appeared to climb towards it. In Ireland, the days of cutting peat for fuel are numbered: commercial operations will cease by 2025. Generations of families in rural areas have historically cut peat by hand and lay claims on the rights to do this. Increased regulation will eventually see this tradition declining along with all other fossil fuel production as carbon neutral ways to produce energy are developed. It seemed significant that the large array of 20 giant wind turbines on the high land to the east was a constant backdrop on our journey along the Old Bog Road. 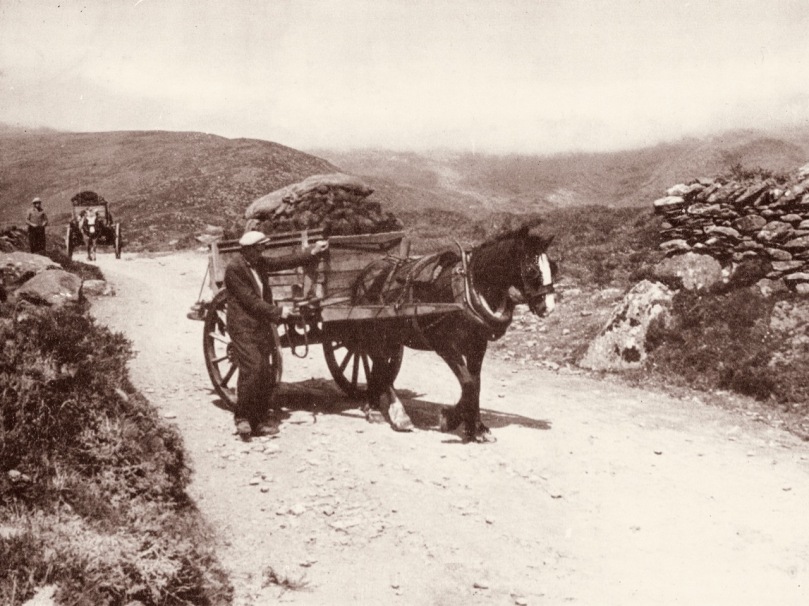 Tomás Ó Muircheartaigh (1907 – 1967) was an amateur photographer who recorded life in rural Ireland during the first half of the twentieth century. We have used examples of his work in previous posts. These two prints (above) demonstrate the hand-working of peat faces and the transporting of sods from the workings. Our Old Bog Road would have seen similar sights in its heyday.

As we threaded our way through the peat workings, we could see the track carrying on towards the ridge. We had done no prior research into the area we were traversing, but as the way grew higher and higher – and we realised we must be coming to a high point in the landscape – we wondered whether there would be any signs of ancient activity on the mountain top. We could see other high points around us – Mount Kidd to the south and Mount Gabriel to the west – and, beyond, a spectacular distant view over Roaringwater Bay: a place like this would have been considered special, surely, to those who knew it thousands of years ago.

As we rounded the last bend in the trackway we could see the summit ahead of us. Initially, we were delighted to see a substantial cairn. But we were surprised by the number of larger, roughly shaped boulders and slabs which were lying around it. Also, there seemed to be a substantial earthen raised platform. 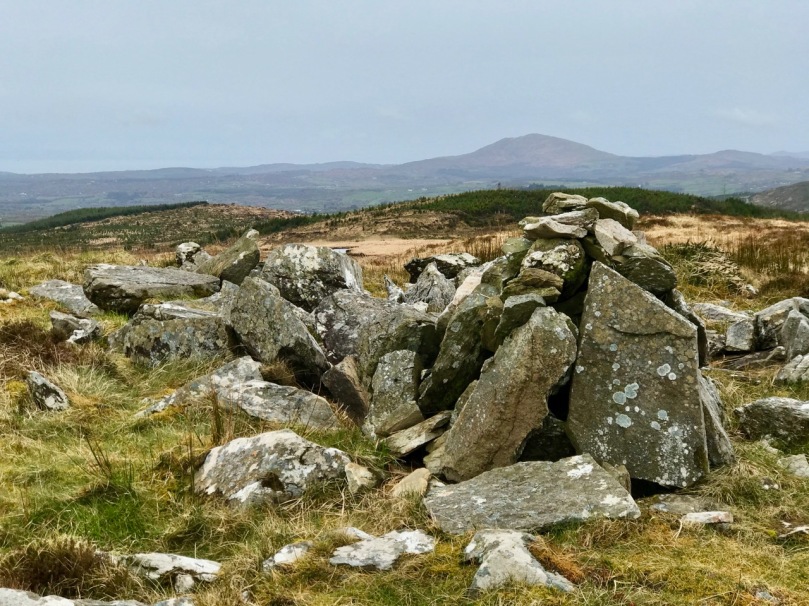 To add to the interest – and the enigma – there were some 21st century monuments on the same hilltop. An inscribed bench and a carved wooden marker which resembled a gravestone, with wording on both sides: 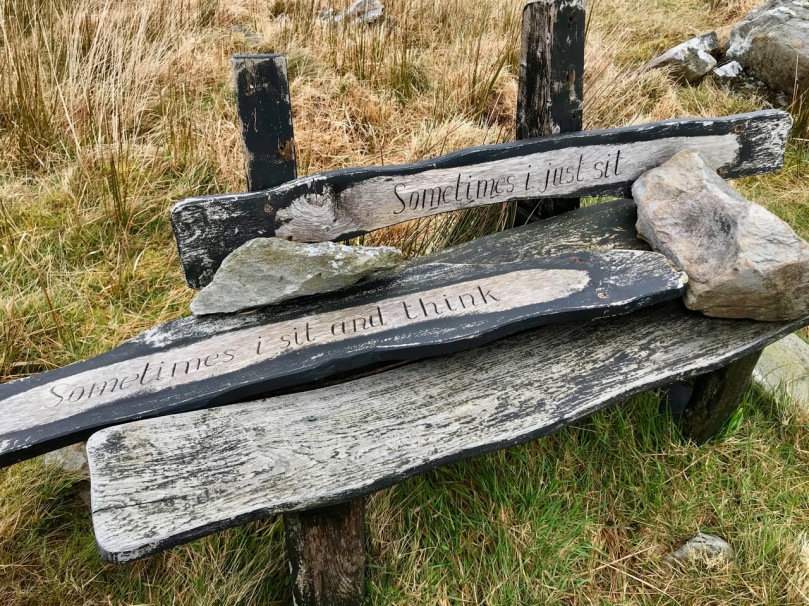 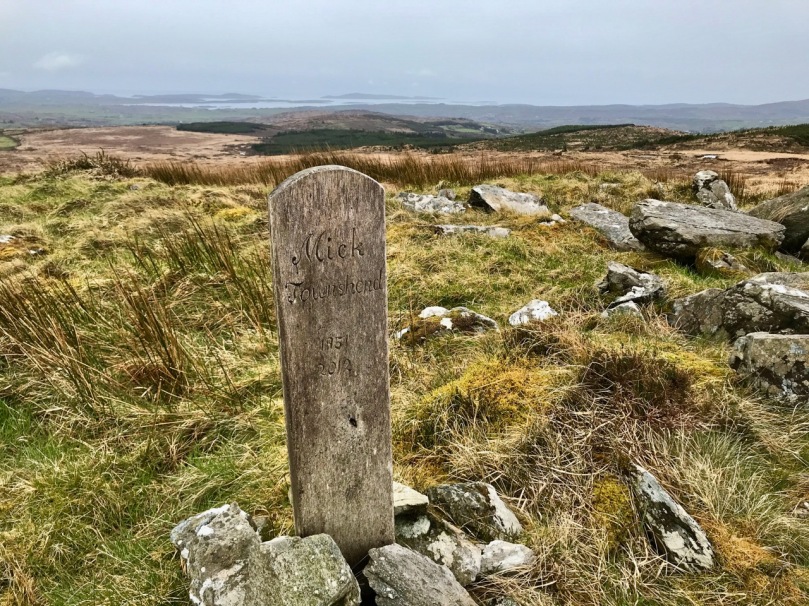 Our subsequent enquiries have given us a little information about Mick Townshend (1951 – 2012). He was well know locally, related to the Townshends of Castletownshend, and lived near Ballybane West. The bench was made by his friend Charlie, and was intended to be installed in Ballydehob: we don’t know why it is now here at the mercy of the elements, but it’s easy to imagine someone finding such a place inspirational, and perhaps asking to be remembered at this spot.

Although it wasn’t the best of days, the view to the north was exceptional, taking in Bantry Bay and the Beara mountains beyond. It’s a place that demands to be returned to. As we prepared for the descent we heard the sound of a small engine, and suddenly there was farmer Florence McCarthy arriving on a quad bike with two collies running behind: they were searching for lost sheep. Good chat was had – although, in deference to the Coronavirus crisis, we all kept the currently regulation distance apart. It felt very unnatural to not shake hands, and we forgot to ask for a photograph, until Florence was just disappearing over the brow of the hill! 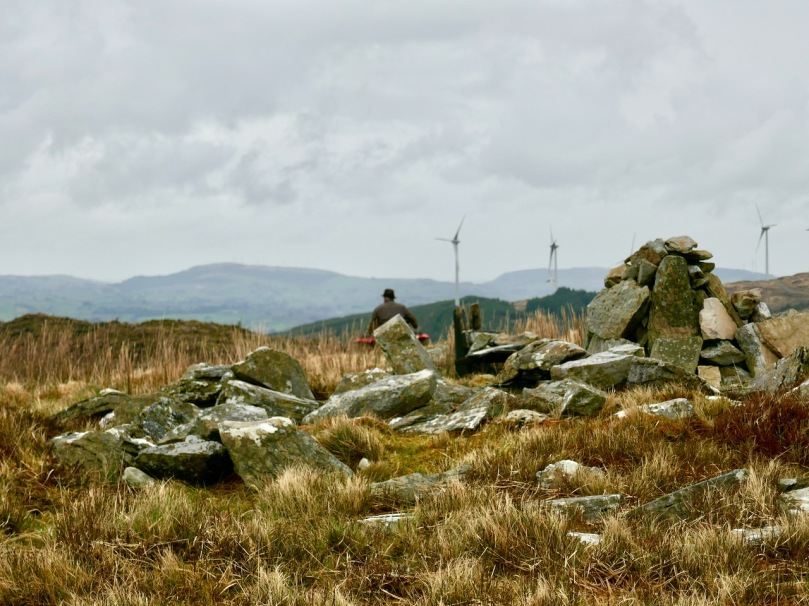 The cairn is a scheduled monument, described prosaically on the Archaeological Survey Database as: Circular area (19.5m N-S; 19m E-W) defined by scatter of large rectangular stones. The Duchas folklore collection proved far more interesting, although I can’t be sure that this entry from Gort Uí Chluana School, Bantry, in 1936 is referring to the same cairn:

Long ago when some of the people from the north of Ballydehob used be carrying their “firkins” of butter to Cork they used go through an old road in the town land of Letter Lickey . . .

On the side of this old road it is supposed that one man killed another with a stone. After that it was the custom with the old people; who ever happened to pass that stone should throw a stone near the spot the stone was dropped at the man or if not something would happen to the person afterwards. Up to the present day there is a cairn of stones to be seen on the side of this old road . . .