Old maps are magical places to get lost in. Pouring over them, trying to identify what I know now, attempting to look at the territory with a seventeenth or eighteenth century mindset – well, several hours have gone by and I realise it’s dinner time. I’m going to share some of my favourites with you in a couple of posts. Mostly, the maps I am using are from the marvellous David Rumsey Map Collection where the maps are free to use for non-commercial use under the Creative Commons license. We are very grateful to you, David Rumsey – what a service to mankind! 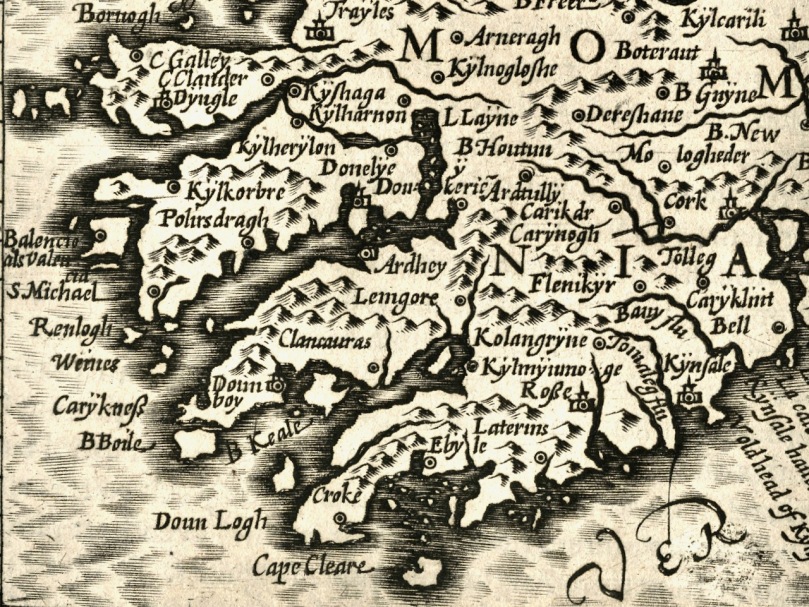 The first map here is by the famous Gerhard Mercator (1512-1594) and Iodocus Hondius (1563 to 1612) and it was published in an Atlas in 1607, after Mercator’s death. The map, therefore, predates the Atlas and was probably done in the late 1500s. The notes that go with the map tell us about Mercator:

Gerardus Mercator can confidently be called the greatest cartographer of the sixteenth century, he helped to establish Amsterdam as the leading center of 16th Century cartography. Gerard Mercator originally a student of philosophy, became an expert in land surveying and cartography, as well as a skilled engraver. His first maps were published in 1537 (Palestine), and 1538 (a map of the world). His most famous contribution to science is a technique of rendering the globe on a flat surface. In 1569 he published his masterpiece, the twenty-one-sheet map of the world, still known as “Mercator’s projection.

We can recognise some things in this map and not others. Croke is Crookhaven, Doun Logh is Dunlough or Three Castle Head and Doun boy is Dunboy Castle home of the O’Sullivan Beares. We can also see Roße – this is Rosscarbery, with the symbol of a church. But after that I am stumped – I am sure our clever readers will be able to identify much more. 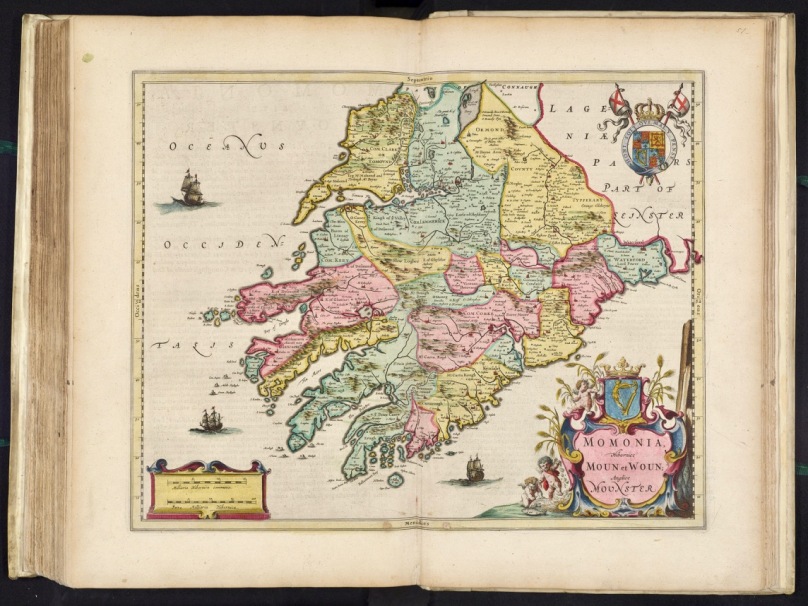 The second map is from 1655 and it’s from Joan Blaeu’s Atlas Major. Blaeu, a Dutch cartographer, lived from 1596 to 1673 and this map is from his Atlas Maior of 1665, considered one of the greatest achievements ever in Atlas publishing. The first thing we notice, of course, is that it’s in colour. I’m not sure if this was original, added when the Atlas was created, or added later. If original, each one must have been hand-coloured. 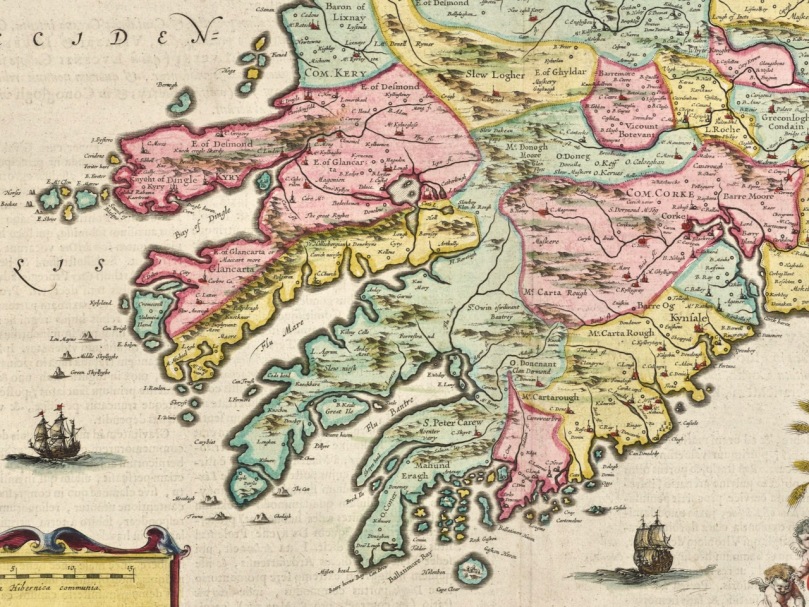 There is much more detail now, and more recognisable elements. It’s a wonderful record of what the major sites were then – sites which nowadays hardly exist, or exist as ruins. Artenay, for example, is Ardintenant Castle, now one of the ruins of what was once a string of O’Mahony Castles. Ardintenant was the home of the Taoiseach, or clan chief, which is why it would be marked on the map. Other O’Mahony Castles are Dunmanus (Donemay) and Dunlough (Dow lough). The chief residence of the O’Driscoll clan is marked as C Perles – to this day, Baltimore is named in Irish Dún na Séad, Fort of the Jewels. Territories of the McCarthy’s, the O’Donovans, Sir Peter Carew and O’Mahonys are given, but also an O’Coner clan, about whom I have no knowledge.

What else do you recognise?

There are many more maps to explore but not all are free to download. One of the most intriguing is Jobson’s map of Munster, done for Lord Burleigh in 1589 and collected by George Carew. Although I can’t reproduce it here, you can view the complete map in the Trinity Digital collection. I can show you here a small section that I came across elsewhere – I like this because it shows the Sheep’s Head with the word ‘Rymers” across it. This, of course, is a reference to the O’Daly family, hereditary bards to the O’Mahonys and other families, and who had a Bardic School on the Sheep’s Head.

Next time, the maps get more detailed still…