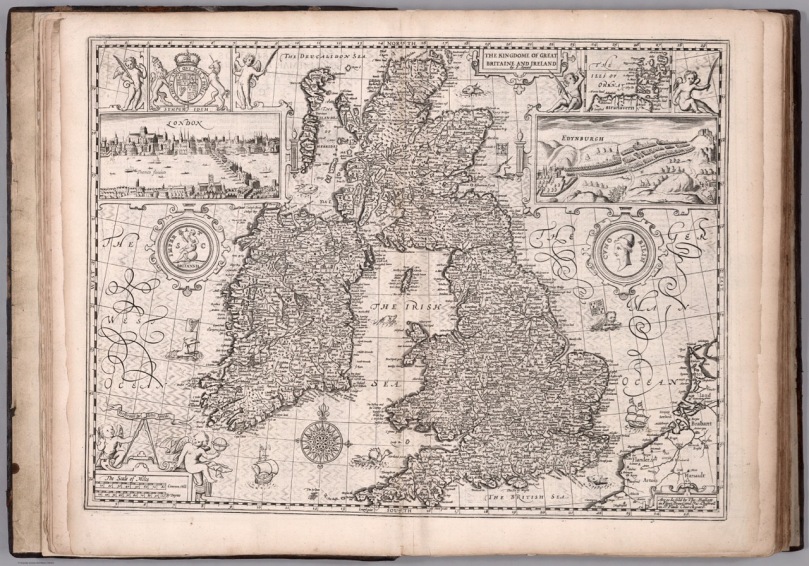 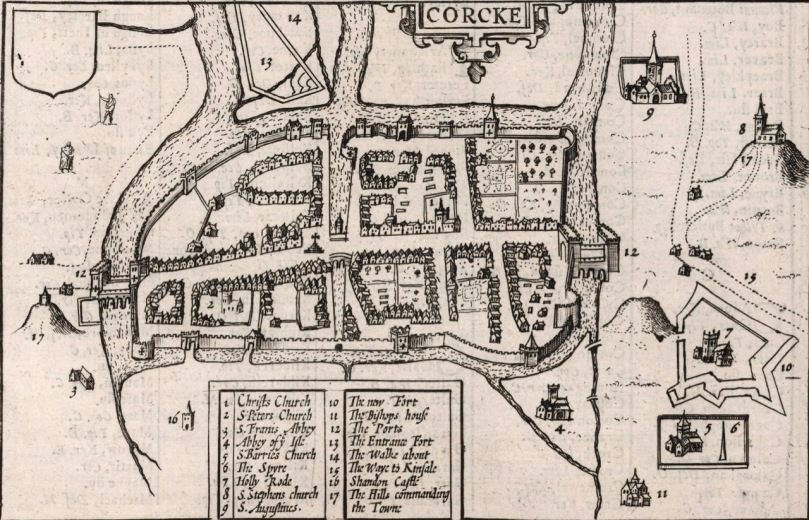 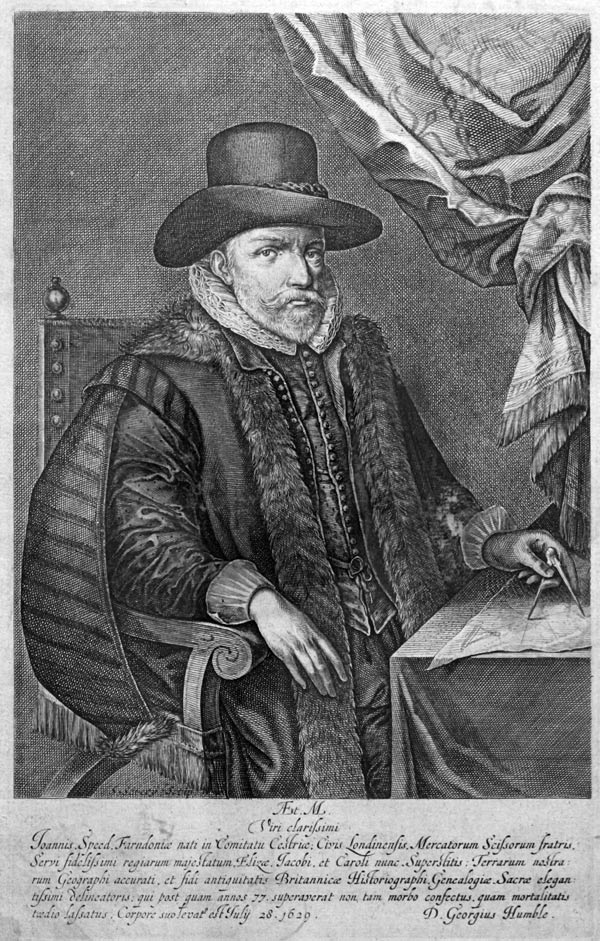 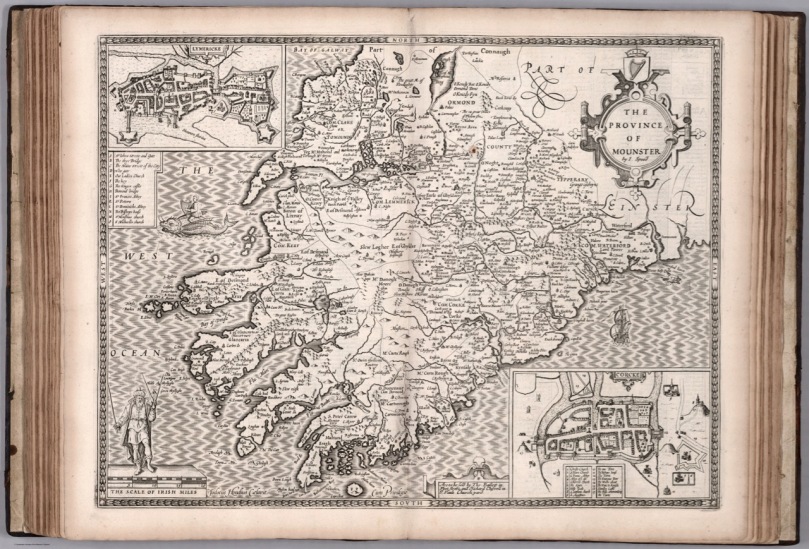 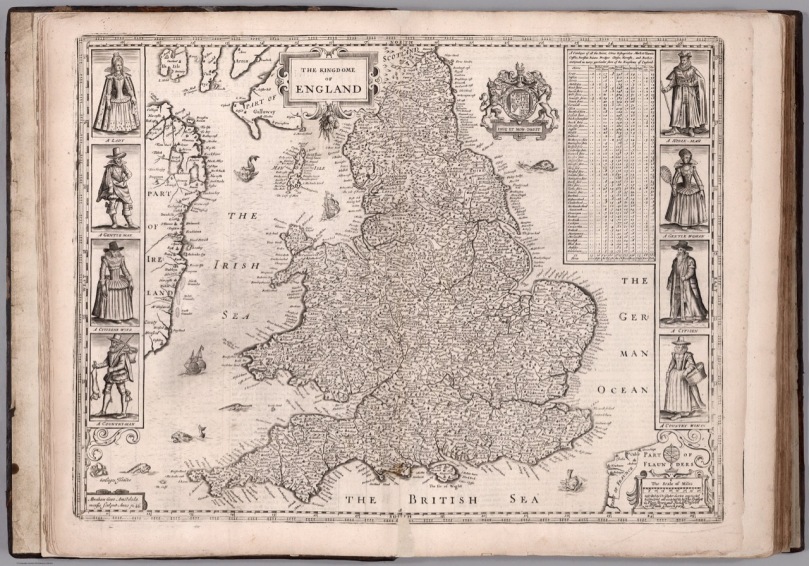 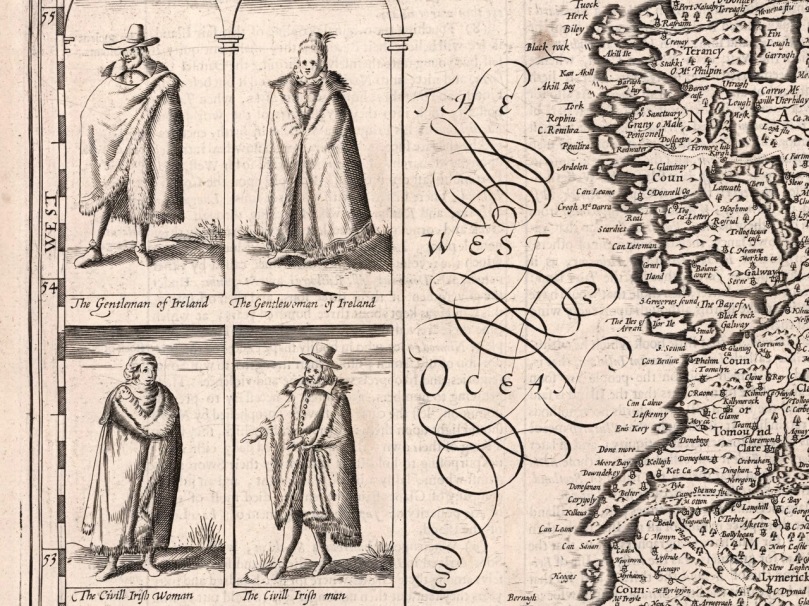 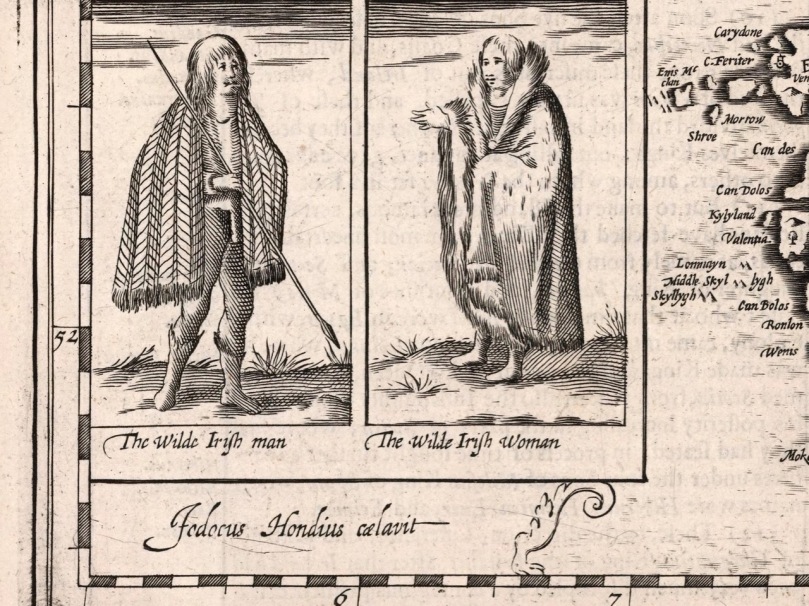 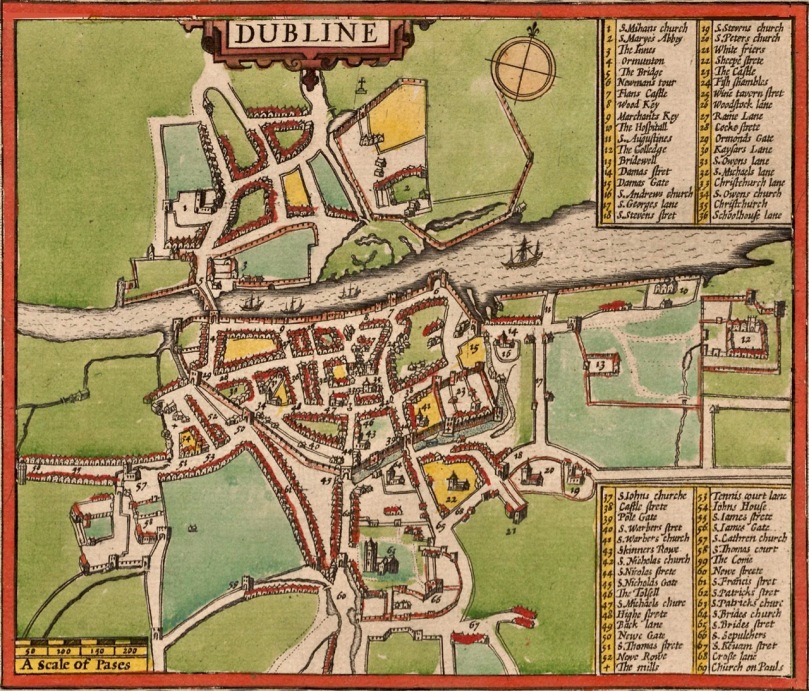 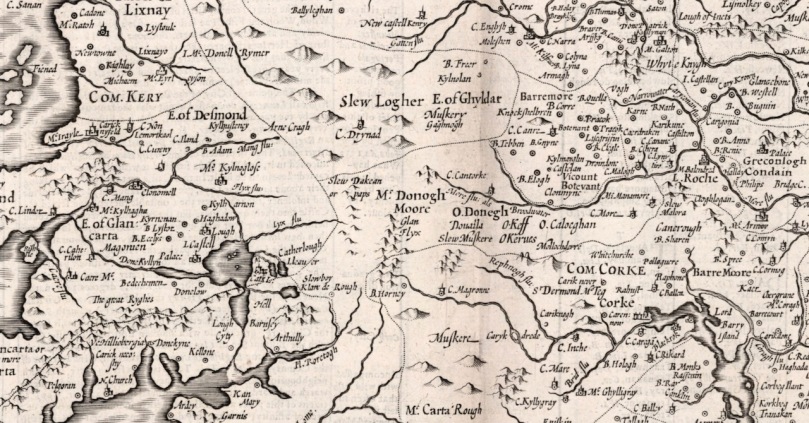 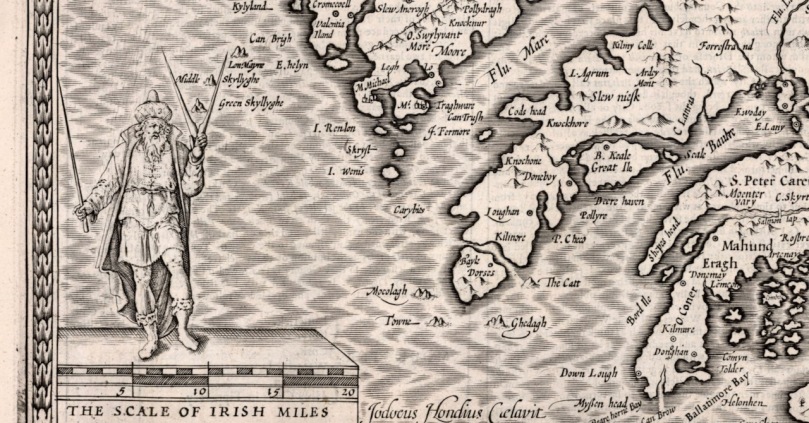 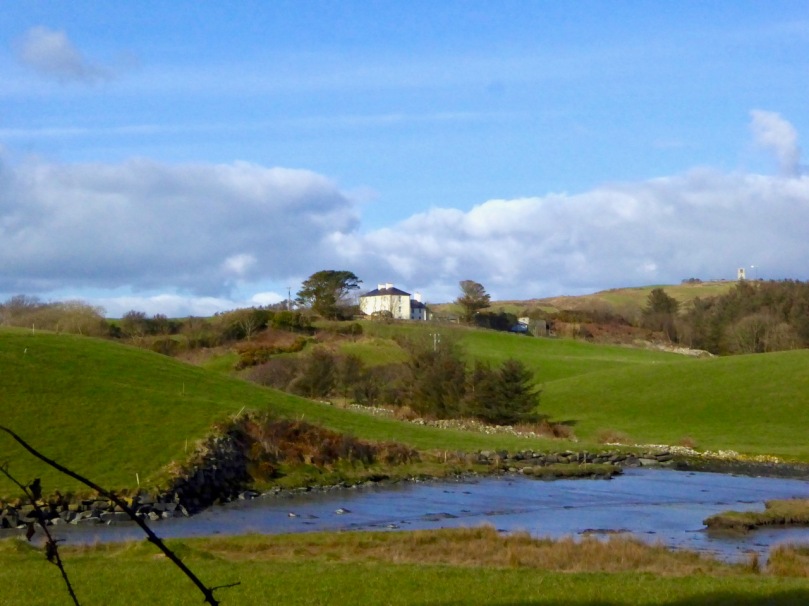 Crough Bay in the townland of Leamcon – one of the sheltered and hidden moorings which became known as a pirates’ nest in the late sixteenth and early seventeenth centuries. This is a view of part of the former estate of Sir William Hull who, as Vice Admiral of Munster, was charged with routing the pirates but in fact connived with them for his own financial gain

…Ireland may well be called the nursery and storehouse of pirates… wrote Sir Henry Mainwaring in a manuscript now in the British Museum (A Discourse of Pirates, on the suppression of piracy 1618). He had first-hand knowledge: this adventurer who was born in the time of Elizabeth spent most of his life at sea, survived the English Civil War – although on the losing side – and had been privateer, pirate and Royal Naval captain. He died at the age of 66 with his feet on dry land, although in poverty and exile in France.

The Earl of Cork’s map of Baltimore,1628 –  following well-founded fears of ‘Turk’ raids he petitioned the Admiralty to fortify the coastal settlements. He was ignored and in 1631 the town was sacked and burned by Barbary pirates who carried away over 100 of the residents to the slave markets in Morroco

My possible ancestor Captain James Harris of Bristol died with his feet in the air: he was hanged at Wapping, in the estuary of the Thames, with 16 other pirates in December 1609. They had been captured in Baltimore, in sight of Roaringwater Bay. Why was it that Ireland – and, in particular, this coastline of west Cork was the notorious harbourer of pirates from all over Europe?

According to Mainwaring, the west of Ireland was enticing because food and men were abundant; fewer naval ships patrolled the coast [than in England]; many of the local inhabitants were willing to trade with the pirates; and there was a …good store of English, Scottish, and Irish wenches which resort unto them… 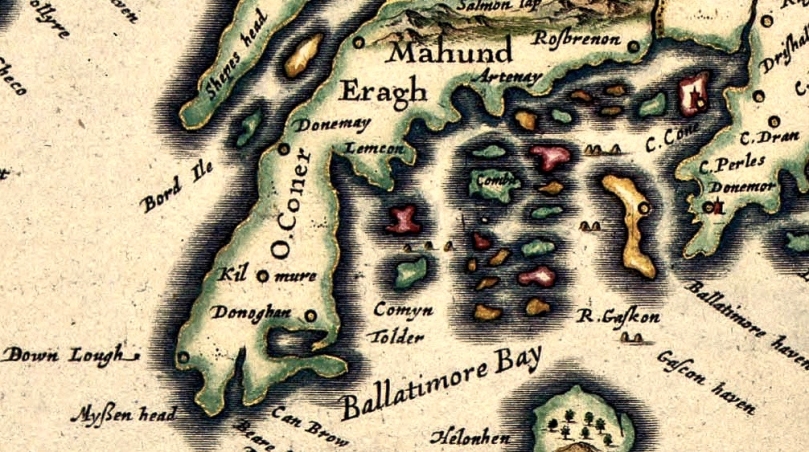 John Speed’s map of 1611 which portrays ‘Ballatimore Bay’ and Carbery’s Hundred Islands – ideal territory for concealing pirates. Note the curious geography, the names of the Irish clans and some of the places we recognise today: Rossbrenon (Rosbrin); Lemcon; Shepes Head and Myssen Head

The coast of west Cork, in particular, was eminently suitable for sheltering ships in need of careening and victualling: bays, coves, inlets and estuaries abound and Carbery’s Hundred Isles (in fact many more than a hundred but it depends on what you count as an island) offer refuges a-plenty. In Captain Harris’s time there was only one naval ship patrolling the whole area from Kinsale around to Bantry and beyond – and this was the Tremontane – an ancient leaky pinnace which could be easily outrun by any respectable pirate crew. All the more unfortunate, then, for my forebear and his band who fell into the hands of the authorities, no doubt through some act of treachery or double-dealing. 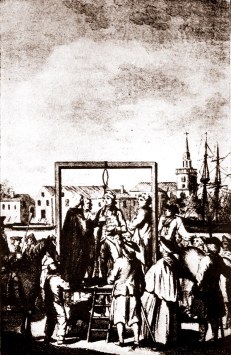 Captain Harris’s family paid to retrieve his body from the gallows at Execution Dock (above left) and gave him a Christian burial. It was more usual for the bodies to be immersed by ‘three high tides’ before being disposed of. In particularly notorious cases the corpses were tarred and then hung in gibbets (iron cages – above right) to remain in public view. Captain Kidd was displayed this way for at least forty years after his death in 1701.

…The Irish folk surreptitiously colluded with pirates. When a captain needed supplies, he sent word of his needs. The reply to his note told him where he might find “so many Beeves or other refreshments as he shall need” on a specific night. When he and his men came ashore, they were to fire upon those who tended the herd, which allowed the herders to claim that they had been forced to hand over the cattle. Later on, he secretly landed “the goods or money in exchange, which by custom, they expect must be 2 or 3 times the value” If the pirates desired arms and/or ammunition and the Irish had any, they traded those items, too… (from Pirates and Privateers – The History of Maritime Piracy – an excellent online resource compiled by Cindy Vallar).

If you would like to learn more about Pirates in west Cork (and to listen to some great music) come along to the Fastnet Maritime + Folk Festival in Ballydehob this weekend 17th – 19th June: Robert is giving an illustrated talk on William Hull and the Leamcon Pirates’ Nest on Saturday 18th at 2.30pm in the Old Bank Building