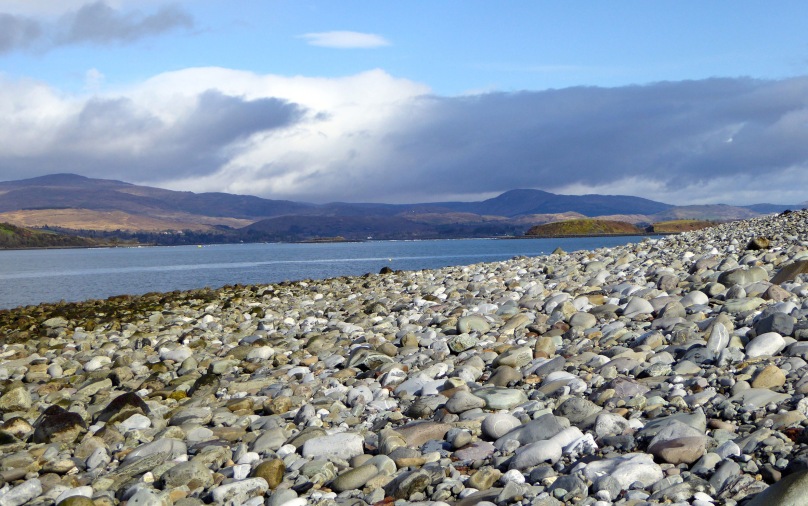 This statement (from Fuchsia Brand’s leaflet on Heritage) was guaranteed to send me scurrying for my history books. And – yes – I found many references to the event: an event which, to my mind, was surely one of special significance for Ireland: the first human ever to have set foot in this land – it must have deserved commemoration… Surely, there must at the very least be a plaque marking the spot? For a moment I wondered if this could be the long sought explanation for the enigmatic piece of Rock Art that’s on display in Bristol’s Museum & Art Gallery – the carving is about the right age… 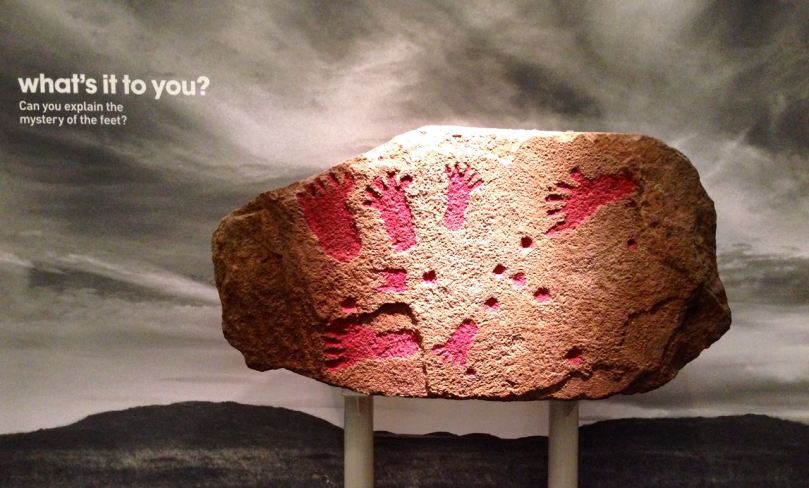 So, a similar example of Petrosomatoglyphia is what I was hoping to find on the shores of Bantry Bay, a mere stone’s throw from our home here in Cappaghglass. But – before that expedition – let’s just go back to the history for the moment. Back – in fact – to the Lebor Gabála Érenn (The Book of the Taking of Ireland), which was written down in the 11th century and – allegedly – based on earlier source material. It takes a bit of wading through: I used a commentary edited and translated by R A Stewart Macalister and published by the Irish Texts Society in Dublin in 1938, but it’s well worth the effort. There’s a lot I had never understood before about the earliest history of the people of Ireland. 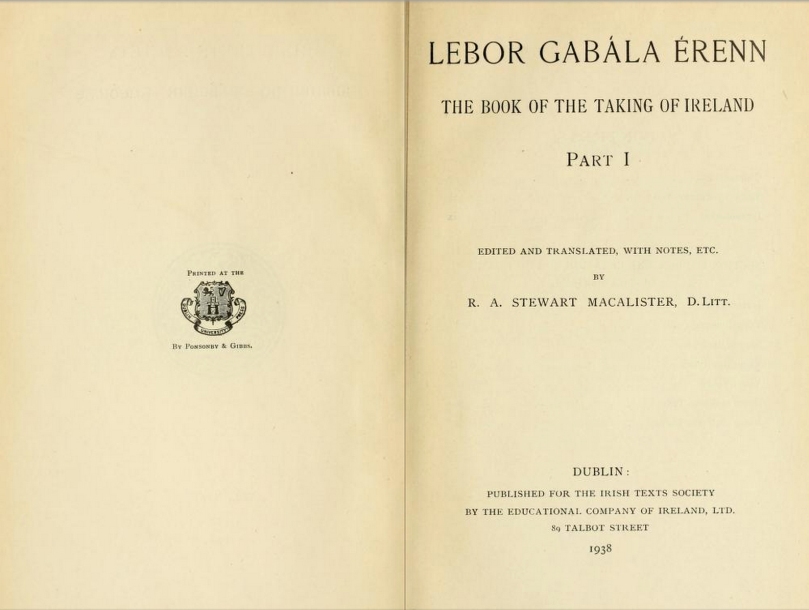 It’s a long story… The book is a collection, in five protracted parts, of all the poems and traditions which had been written and learned by the Bards, telling the history of their nation. There’s a lot of repetition: like the Gospels there are several versions of each episode and it’s a bit dizzying to try to get a clear overall picture of events. So, settle down and imagine the visiting Bard you have given hospitality to in your tower house on a winter’s night is regaling you with tales of your ancestors. 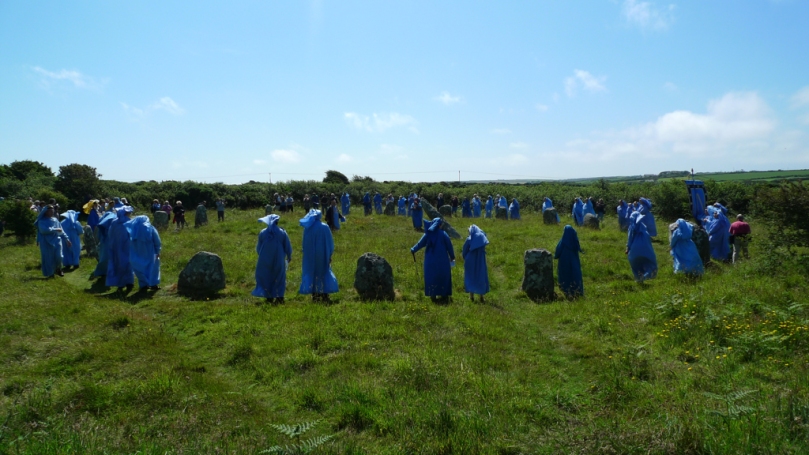 Everything has to go back to Noah, who was only allowed to take with him on the Ark his own sons and their wives. One of his sons, Bith, had a daughter – Cesaire (or Cessair). As she had to stay behind so also did her father, but they built their own ships, three of them, and set sail with two other men and a large company of women, looking for a land which ‘knew no sin’ because it had never been populated: there they would settle and aim to re-found the human race in a green and fertile place. Their voyaging took them to many parts of the known world and they came eventually to the north of Spain – which we know today as Celtic Galicia. Cesaire knew that this wasn’t the Utopia they were seeking but she climbed to the top of a very tall tower and, in the far distance, she spotted Ériu – ‘…where no evil or sin had been committed, and which was free from the world’s reptiles and monsters…’ 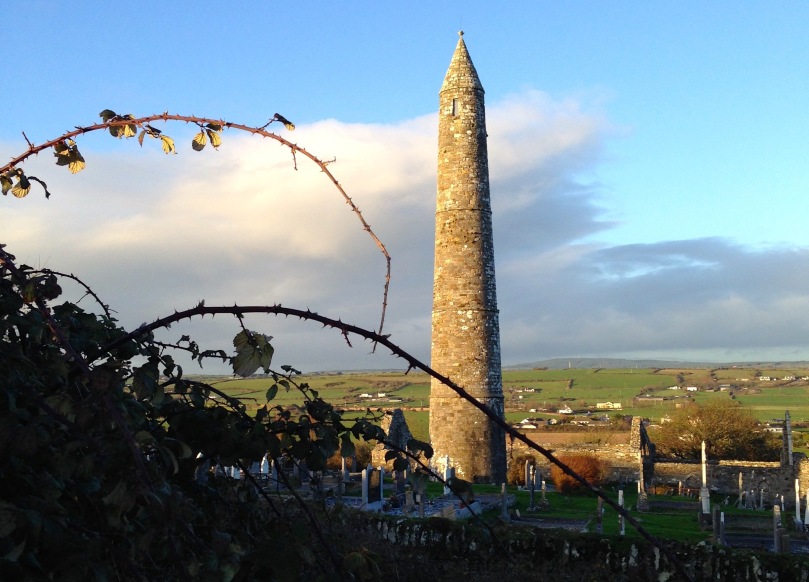 And so it was, forty years before the Great Flood engulfed everything, Cesaire’s expedition sailed up to the mouth of the Mealagh River, passing on the way the most beautiful landscapes they had ever seen – landscapes that we are fortunate to see every time we set out to explore our own new horizons. 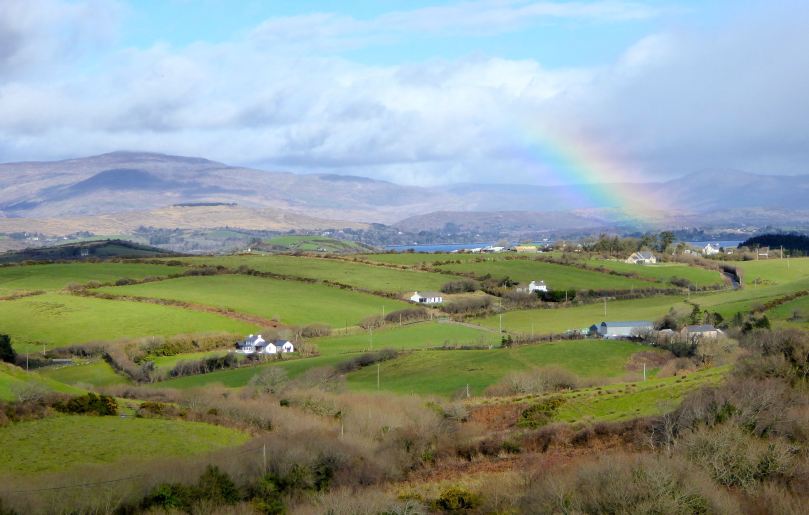 Now it was time to glimpse for ourselves this remarkable site – Dún na mBarc – the place of the boat – (Donemark -Dunnamark Townland) in the parish of Kilmocomogue. We drove up the unremarkable N71 through Bantry town and turned in to its attractively situated golf course, then made our way down to the shore. Disappointingly, that is also unremarkable: it’s got a brooding, although not unattractive atmosphere about it. We came there at low tide and saw mud-flats – alive with foraging birds, including a very fine Old Nog – the huge stones of a disintegrating quay, and distant views to the Sheep’s Head and Beara Peninsulas. 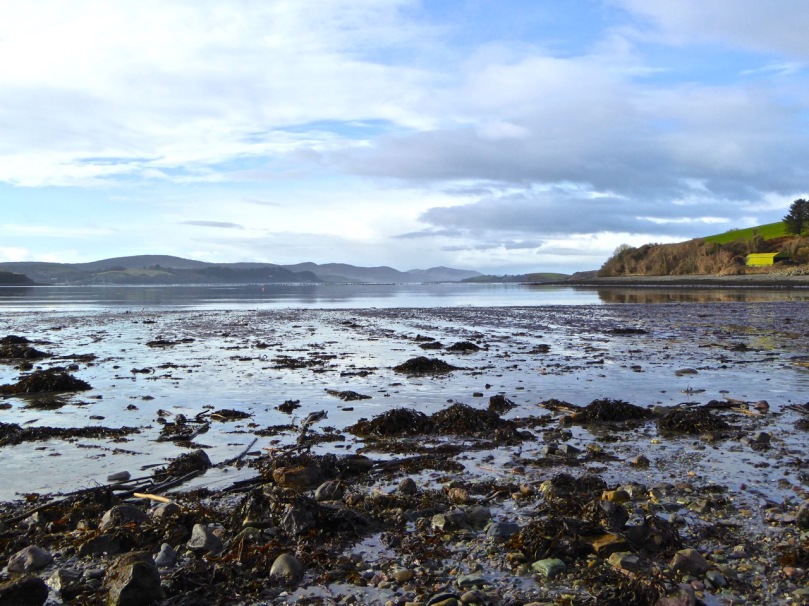 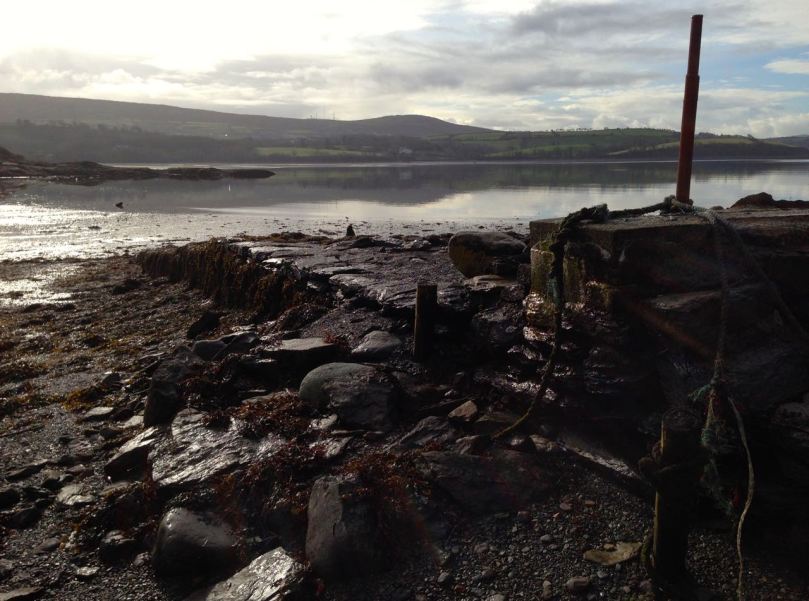 Alas, there were no footprints, no plaque, no signification of the very important history of this site: there was only our imagination to fill in the gaps. I could envisage Cesaire’s Bronze Age boat (only one survived the full journey) making its way up the azure waters admiring the emerald green of the landscape and passing by some of Ireland’s most dramatic scenery. They landed on ‘…a Saturday, the fifteenth day of the moon at Dun na mBarc…’ 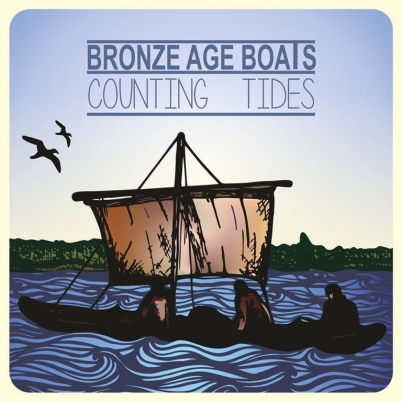 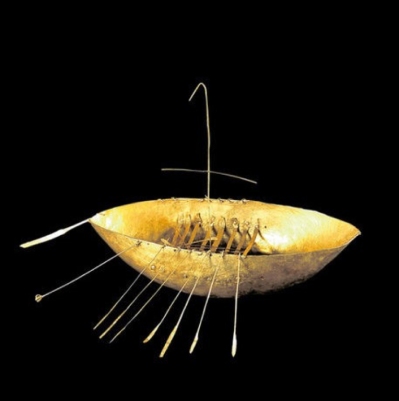 We did find a single commemoration of this event: in the tranquil gardens of the National Learning Network Centre, which is not far from the mouth of the river. It is a work of art, made in 2013 by the students of the Centre, under the guidance of Michael Ray and the auspices of the West Cork Arts Centre – you may remember both from this recent post. ‘Voyage of Stories’  recalls that pioneering arrival in the form of a boat sculpture made of steel, copper and glass and set up over a pool. The glass tiles tell of invasions and emigrations both ancient and modern in Irish and English. It’s a good way to commemorate the journey and those early settlers, we thought. 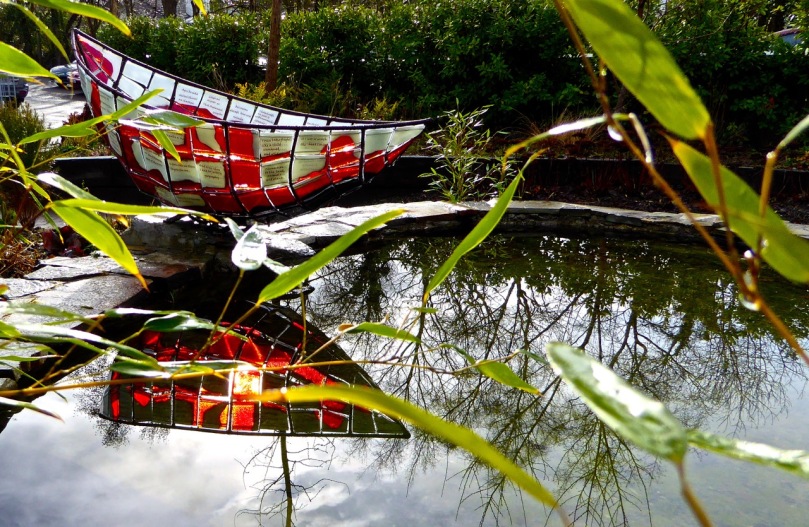 ‘Voyage of Stories’ at Donemark

Now, Finola – at my side and wearing her Archaeologist’s hat – is tutting at my unquestioning acceptance of the dating of this milestone in Ireland’s history, bearing in mind that the passage graves at Newgrange, Knowth and Dowth appear to be some 5,000 years old and – she says – there were people living in Ireland earlier than that! But my view is that there’s history, and there’s story… Well, perhaps history is always someone else’s story but give me a good tale any day, especially one woven with adventure and romance and told at the fireside. 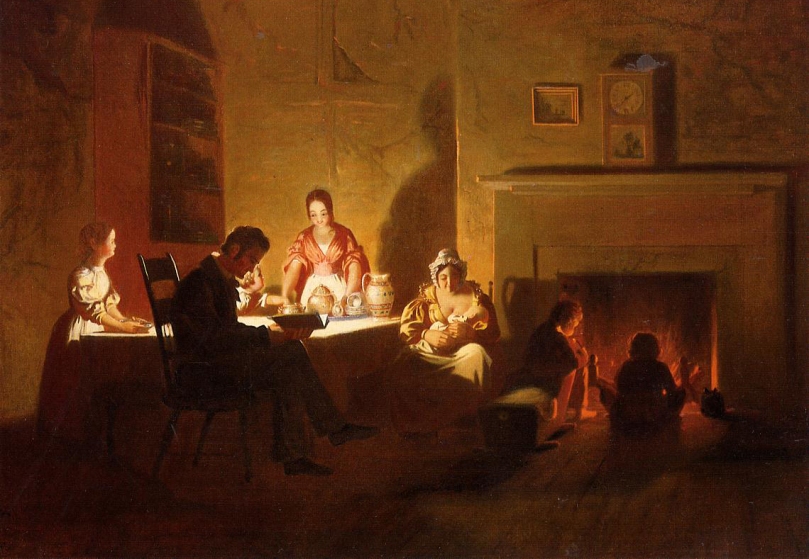 So now you know all about Cesaire, who was the first to step from that frail vessel which had travelled all the way from Egypt in those far off days. But perhaps I should also tell you a little more: the three men on that voyage faced the prospect of serving no less than fifty women between them if they were to populate this new land. The Lebor Gabála Érenn is quite frank about this: ‘… Ladra, the pilot, from whom is Ard Ladrann named he is the first dead man of Ireland before the flood. He died of excess of women, or it is the shaft of the oar that penetrated his buttock. Whatever way it was, however, that Ladra is the first dead man in Ireland…’ while Bith – Cesaire’s father – was already aged before the voyage and also passed away soon after. That left one man – Fionntán – who was so frightened by the prospect of facing all those women alone that he ran away and hid in a cave. There he changed into a Salmon and survived the Flood which, sadly, overcame Cesaire and her companions. The shape-shifting Fionntán went on to live for five and a half thousand years (by my reckoning that means he’s still alive!) and recorded all of Ireland’s history (including at first hand the account of Cesaire’s voyage) – which he then taught to the Bards of Ireland so that it would be taken out into the world…

But all that is for another day! 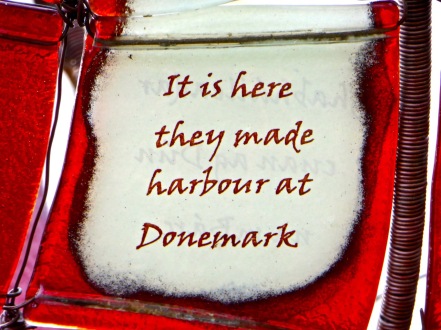