Every Catholic Church in Ireland has a set of Stations of the Cross on the wall – fourteen focus points for devotion and reflection on the Way of the Cross. The Stations, as they are universally known in Ireland, come from a long tradition within the Catholic Church, often associated with St Francis, but also with the Via Dolorosa in Jerusalem, and the custom that Pilgrims had of retracing Jesus’ footsteps on the way to Calvary.

Most Stations appear to have been ordered from a catalogue and all look similar, painted in an Italianate Renaissance style and framed in wood. The image above, of one of the stations in a rural church in Cork, is typical.

However, architects, priests, and parish committees sometimes took the bolder step of commissioning Stations from a contemporary artist. The lead image and the one above are both from sets of Stations by Richard King. The lead image is the Deposition (Christ taken down from the Cross) and is in a small church in Foilmore in Kerry, while that immediately above is from Swinford, Co Mayo, as is the one below – a painting that focuses ferociously on the suffering of the crucified Jesus.

This was an important source of income for artists from the beginning of the new Irish State. While we don’t often think of the Catholic Church as a patron of the arts, in practical terms it functioned as such for many painters and sculptors. In fact it is hardly an exaggeration to say that the church was the largest commissioner of contemporary art in Ireland during most of the twentieth century.

Galway Cathedral is a showcase for twentieth-century artists and all fourteen Stations were carved in portland stone by Gabriel Hayes. It took her eighteen years to complete them and she called them ‘the main work of my life.’

Certain architects – Liam McCormack, for example, or Richard Hurley – considered each aspect of their design and included specification for contemporary art. Some indeed, like Eamon Hedderman, worked closely with artists to plan a church holistically, incorporating the art into the integral fabric of the building. A magnificent example of this can be seen in the Church of the Irish Martyrs in Ballycane (Naas) where large-scale graphic stations designed by Michael Burke are surrounded by contemporary glass by George Walsh.

Many of the Irish artists familiar to us from the 20th century catalogues have contributed Stations to churches around the country – sometimes to the large cathedrals but often too to obscure country parishes where the priest (it was usually the priest) wanted something more than a standard imported set. Sean Keating‘s Stations for St John’s Church in Tralee (both images below) are arresting in their drama and strong character studies.

Stations come in many media and I have tried to show a variety in this post by well-known Irish artists. Bath stone was the medium of choice for Ken Thompson – the image below is of one of his stations for St Mel’s Cathedral in Longford. Below that is a Station from Ballywaltrim Church in Bray by the Breton/Irish Sculptor Yann Renard Goulet, although I am not sure what the material is.

Patrick Pye is more commonly associated with his stained glass windows for Irish churches, but his painted Stations for the Church of the Resurrection in Killarney (below) bring a quietly beautiful reflective focus to a contemporary interior.

Sean O’Sullivan was known primarily as a portrait painter, but he also designed Stations, such as the ones below for the church in Newquay in Clare. Using only pencil and colour washes, he has produced powerfully emotive scenes (below).

Stations, however, are often unsigned and so our old friend Anon is responsible for many. A future post will include some of his or hers. The enamel Station below, for example, may be by Nell Murphy, but I can’t confirm this, so Anon it is, for the moment.

I am also planning a post on Stations done in stained glass – they are some really beautiful example, starting of course with Harry Clarke’s Lough Derg windows. But this post will start us off with some of the examples I have seen in churches around the country – let’s call it an Introduction to Irish Contemporary Stations. I’d love to hear from readers who have their own favourite set. And if anyone knows the artist responsible for the Stations in the Franciscan Church in Wexford (example below), do let me know! 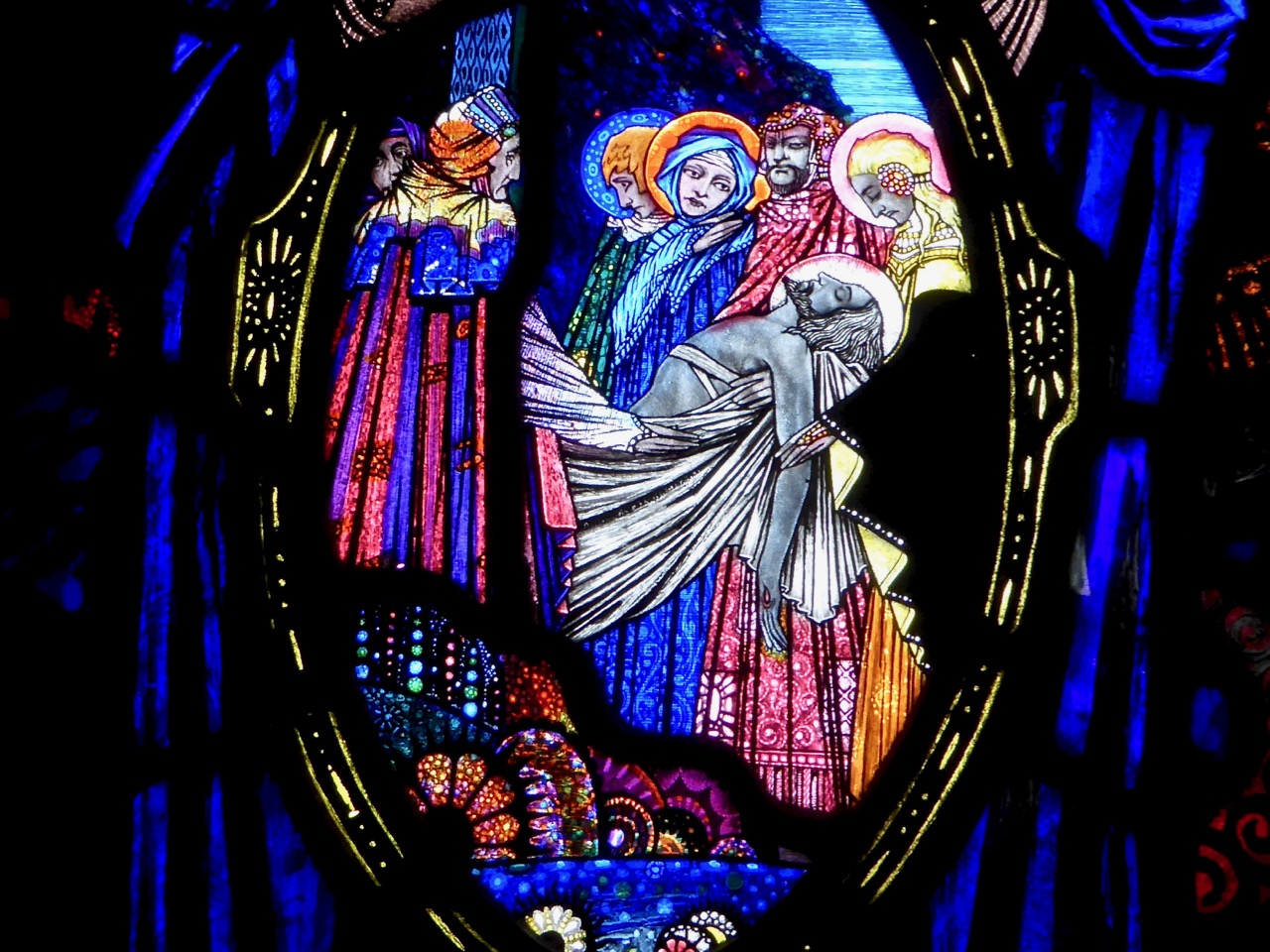 The Lough Derg Harry Clarke windows are unusual and fascinating – and generally inaccessible unless you are willing to undertake the rigorous pilgrimage. I am very grateful indeed to have been given the opportunity to photograph and write about them. I refer readers to Robert’s post about Lough Derg, Journey into Purgatory, for those unfamiliar with the place and the pilgrimage. Go off and read that first, then come back to me. If you already know all about Lough Derg, but not much about Harry Clarke, then take a browse of some of my previous posts about Ireland’s most celebrated stained glass artist. If you’re not sure what stations of the cross are, here’s an explanation. Done that? Back now? Great – let’s get started.

Harry was already starting to get ill in 1927 when he undertook the commission to design a set of fourteen stations of the cross in stained glass for the Basilica in Lough Derg. He was, at the same time, very busy on numerous commissions, including graphic design and book illustration work, as well as stained glass windows for Ireland and abroad. He was so busy, in fact, that he used to absent himself from Dublin so that he could work in peace in a studio in London. Nevertheless, he was keen on the Lough Derg project, not least because the Canon, Fr Keown, was the same one with whom he had worked on the Carrickmacross windows. The design he came up with was unique: each of the windows depicts a different apostle (Judas being replaced by Matthias), rounded out to fourteen by adding St Paul and Our Lady. Each figure holds a mandorla-shaped panel upon which the stations are presented.

In order to ‘count’ as an official Harry Clarke window, as opposed to one produced by the Harry Clarke studios, Harry himself must have designed, and created or closely supervised the execution of the window. The Lough Derg windows were definitely designed by Harry – the drawings he made for them still exist. Artisans in his studios began the work in his absence following his detailed instructions.

A close look at ‘Veronica Wipes the Face of Jesus’, contained in Philip’s mandorla

Nicola Gordon Bowe, the renowned Clarke scholar, described the process* thus: “His choice of glass, detail, colour, design and leading are all fully evident in the dramatically effective concept of these windows, even though any study of the original designs for the inset panels and their realization in glass will reveal his absence.” Indeed, before the windows could be finished and installed Harry had to travel to Switzerland to spend time in a sanatorium. 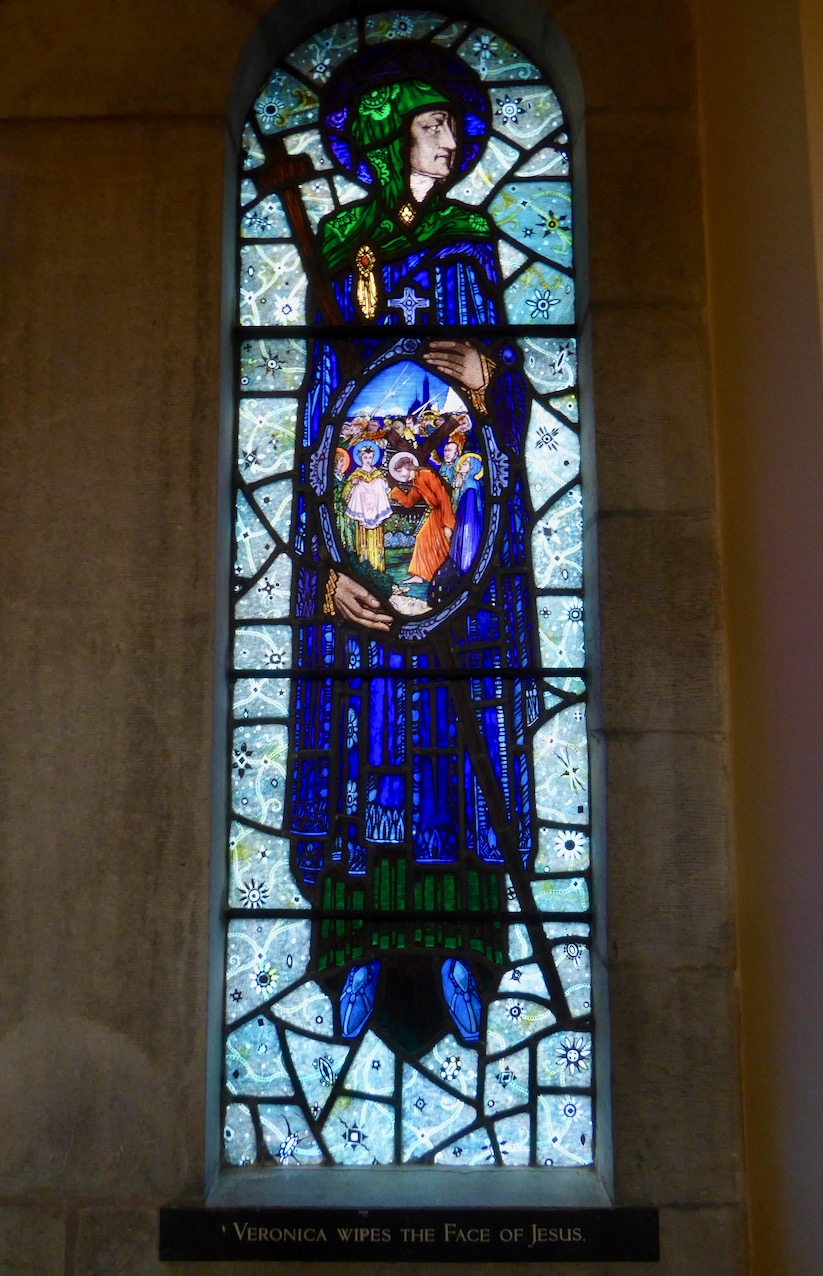 Philip and his mandorla

Each saint is shown, as is tradition, with his symbol, often the instrument of his martyrdom.  Philip, for example, is shown with a cross, as he was crucified upside down. His medallion shows Veronica wiping the face of Jesus. The apostles and Mary, as well as the small figures in the mandorlas, have all the Harry Clarke hallmarks – large, expressive eyes, long tapered fingers, highly-decorated medieval-style clothing, sleeves with hand points, complicated headgear, forked beards, pointed feet.

Despite the absence of the master’s hand, it is hard to imagine how these tiny stations could be any more exquisite than they are. The same figures occur in all or most of them – Jesus, his mother, Mary Magdalen, John his beloved apostle, and the tormenting soldiers. There is also, of course, a host of minor characters, often peeking in from the sidelines or half-hidden behind others. Harry habitually drew from life and used himself and his friends as models. Some of the glimpsed faces in the scenes are no doubt based on people familiar to him. They range in expression from sorrowful and noble to cruel and savage. 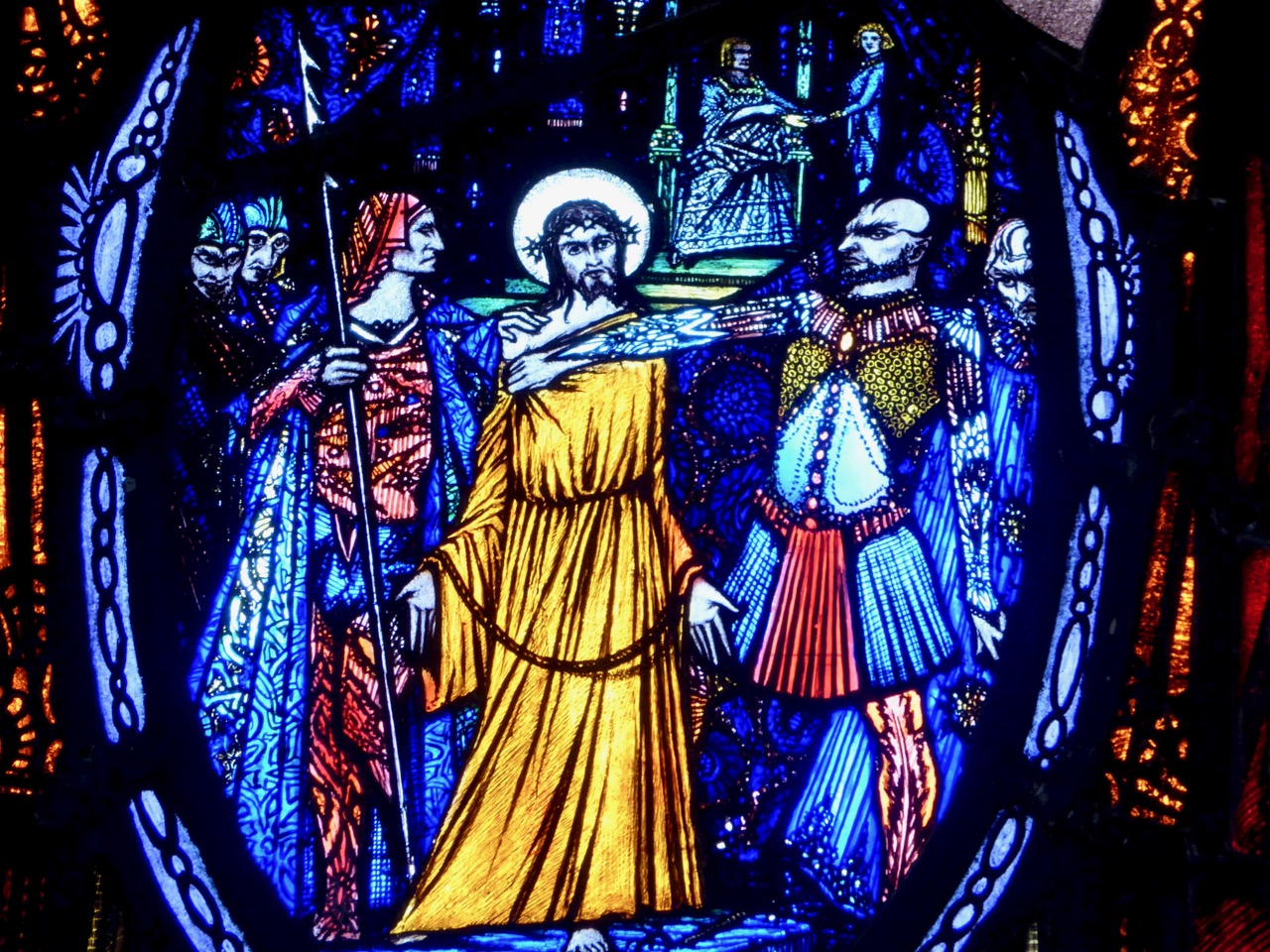 ‘Jesus is Condemned to Death’

One of the intriguing aspects of these stations is that many of the figures are rendered in ways that depart radically from the conventional depictions of biblical characters, images that were for the most part based on Renaissance paintings. Indeed, some of the characters as imagined by Harry would fit more comfortably into his illustrations for Hans Christian Anderson fairy tales, or stories by Edgar Alan Poe. Look, for example at the first station ‘Jesus is Condemned to Death’. Apart from the tragic figure of Jesus, the individuals would not be out of place in a picture for the sort of fanciful and macabre tale that Harry relished illustrating. In the background Pontius Pilate washes his hands attended by a page dressed in what looks remarkably like a frock coat. The fierce executioner is distinguished by his strands of hair and by a striking outfit that combines an Elizabethan skirt with medieval armour.

We meet him again, cloaked but recognisable in ‘Jesus Falls the First Time’ (above) 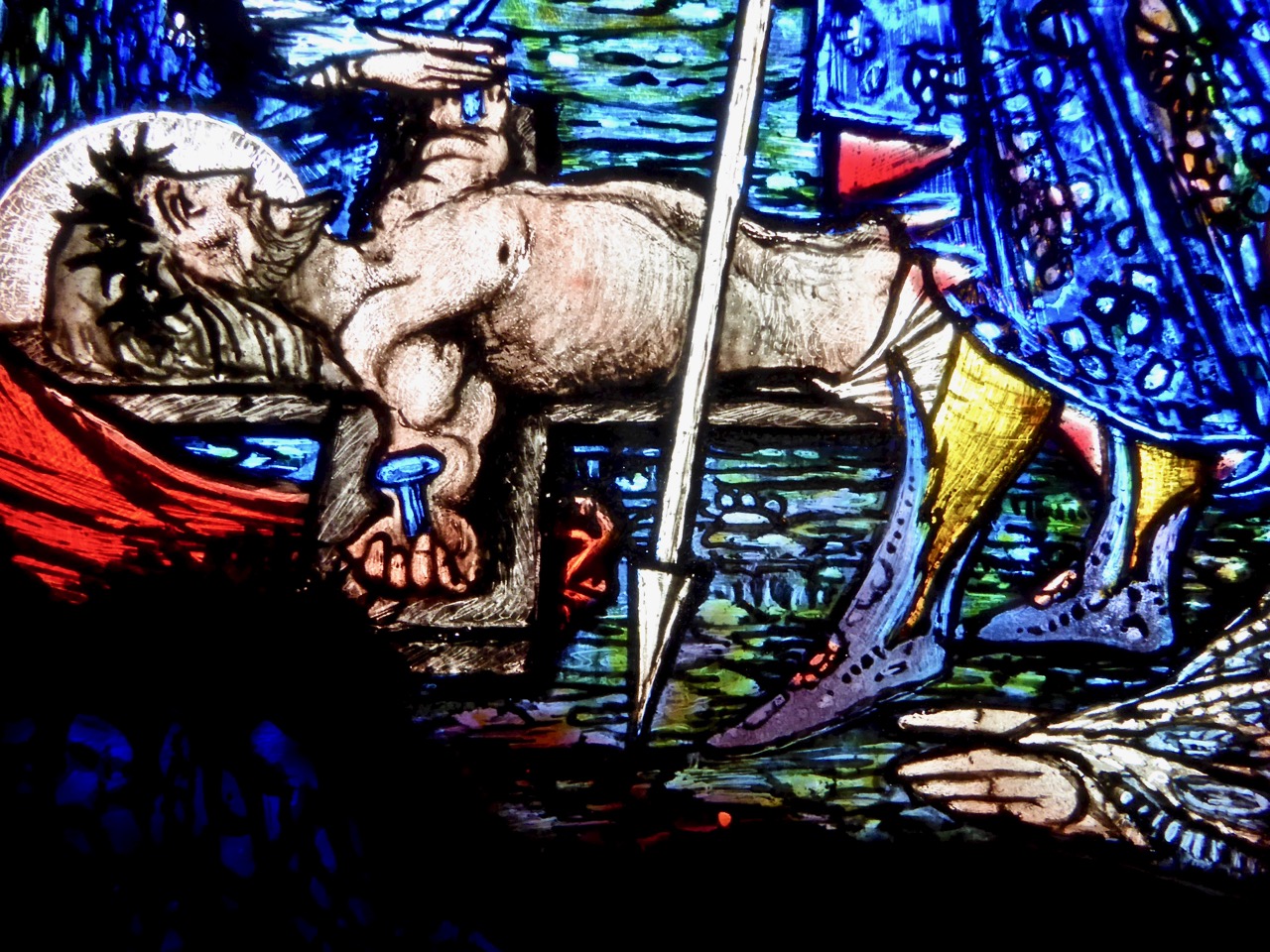 In the crucifixion station the soldier who stands gazing down is wearing a pair of elaborate shoes and yellow stockings that strikes an odd note in what is otherwise a sombre scene. Soldiers in each station wear helmets that come to points over the bridge of the nose or that are decorated with feathers and tufts. Mary Magdalen is dressed in colourful garments and hair adornments that could be suitable for a princess going to a ball, no doubt an allusion to her background.

On the other hand, Mary and John, who appear in many of the stations, are shown as gentle and sorrowful. Mary is dressed in her traditional blue: in the final station (below) it is she, pictured as the Queen of Heaven, who hold the mandorla showing Jesus being laid in the tomb (the lead picture in this post). 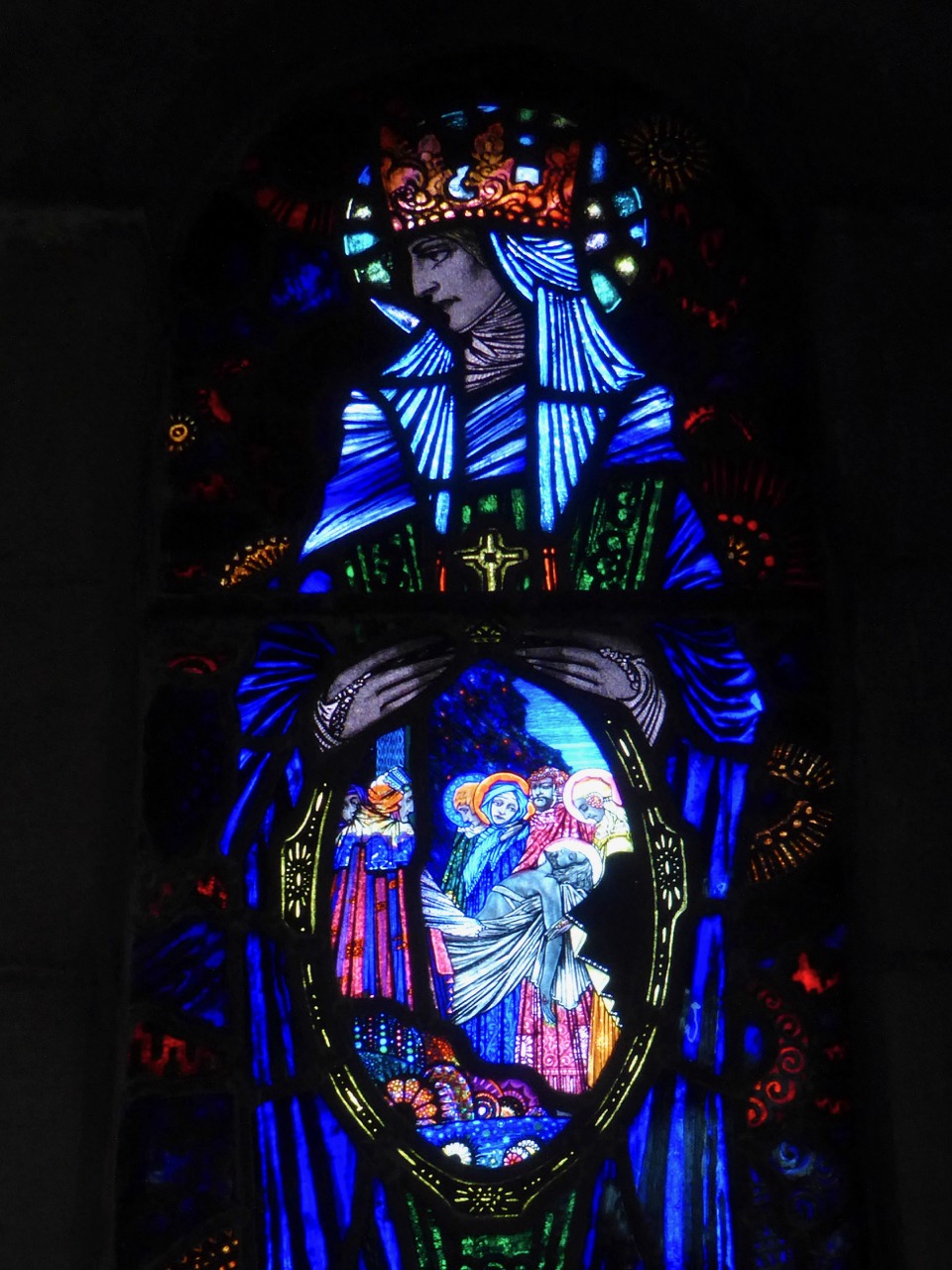 It is tempting to see in John, with large sad eyes and cropped hair, an image of Harry himself, who must have known by this point that his illness was serious. Harry poignantly dresses John in green, the colour of bountiful life and the triumph of hope over death.

Mary and John witness the crucifixion

My sincerest thanks to Maureen Boyle for facilitating my visit to Lough Derg, and to Sharon for looking after us on the Island and sharing so much information.

‘Jesus is Laid in the Tomb’

* In 1990 the windows were exhibited in Dublin. They had deteriorated over time, and were completely overhauled and restored by the Abbey Stained Glass Studio. Before they were returned to Lough Derg they were put on display in the Royal Hospital, Kilmainham for two months. I have the program from which I took the Gordon Bowe quote, thanks to my late and dear friend Vera who was a huge Clarke fan and attended the exhibition and whose notes I now have. However, I have just discovered that the program is also available online.